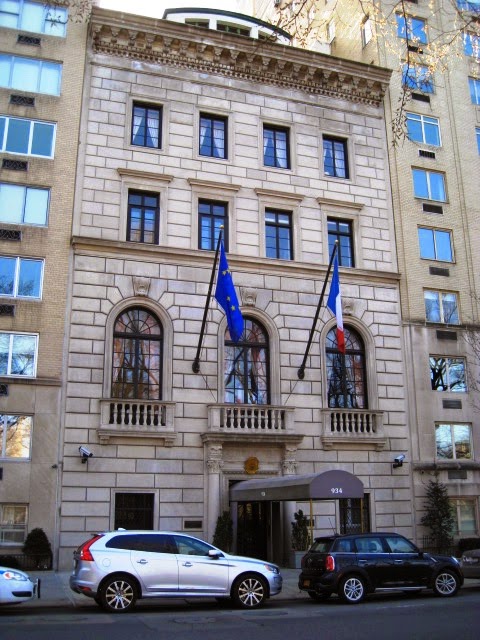 Things were going well for “Sunshine” Charley Mitchell in 1924.  Already the President of the National City Company, a private investment banking firm, he had been named President of National City Bank in 1921 upon the resignation of James A. Stillman.

The 47-year old Charles Edwin Mitchell lived in the former Lamon V. Harkness mansion at No. 933 Fifth Avenue with his wife, Elizabeth, and their two children, Rita and Craig Knowlton Mitchell.   Mitchell’s increasing influence and wealth led to his construction of Hilldale, an impressive summer residence in Tuxedo Park that year.

Having completed his Tuxedo Park house, Mitchell turned to his city dwelling.  He purchased the Hoyt residence at a time when Manhattan millionaires were moving into modern apartment buildings and abandoning private homes.  And yet Mitchell commissioned architects Walker & Gillette to design an up-to-date mansion on the Hoyt site; one reflective of his social and professional standing.

Construction began in 1925 and was completed the following year.   The 45-foot wide Italian Renaissance palazzo rose five stories; its restrained design and rusticated limestone façade highlighted by three grand arched openings at the second floor, each with a stone balconette.

The New York Times described the furnishings and “equipment” as being “in keeping with the expensive structural details.  A grand staircase leads from the first-floor entrance hall to the sumptuous living room.”   The newspaper would later describe “old masters, art objects, paintings and tapestries” that adorned the rooms.

The Mitchell mansion would be one of the last great private homes erected on Fifth Avenue.  On July 17, 1927 James C. Young, writing for The New York Times, noted that while Mitchell had recently erected his home, “Among those recently demolished was the house of Henry Phipps at Eighty-seventh Street, the Woolworth home at Eightieth, that of the Brokaws at Seventy-ninth and the home of Elbert H. Gary [sic] at Sixty-seventh.”  Young said “The saunterer who once carried every chimney in his memory finds the avenue so altered that he can scarcely recognize a landmark.”

But the Mitchells carried on in their new mansion in the style of a generation earlier.  Elizabeth had always been a patron of the musical arts and among the first entertainments she gave in the new house was a dinner for Jan Ignaz Paderewski and his wife on December 16, 1926.  And on January 25, 1928 The New York Times noted “Mr. and Mrs. Charles E. Mitchell gave a dinner and musicale last night at their home, 934 Fifth Avenue.  The artist was Andreas Segovia, guitarist.”

The family’s lavish lifestyle continued, as reflected by a Times mention on September 20 later that year.  “Mr. and Mrs. Charles E. Mitchell are sailing on the Olympic to remain abroad for several weeks.  On their return they will be at Tuxedo Park before going to 934 Fifth Avenue.”

On Tuesday, October 29, 1929 the stock market fell precipitously; the first domino of the Great Depression to fall.   While “Sunshine Charley” and Elizabeth Mitchell’s lifestyle continued unchanged, the Government began investigating Mitchell’s activities.  Many in financial and political circles blamed his policies for the crash.

But even as the clouds darkened, nothing seemed out of place to Manhattan society.   On November 16, 1931 Elizabeth hosted the first meeting of the Guild of Musical Amateurs.   Musically-inclined “women of society” had formed the group, and its members came from some of New York’s wealthiest families.  Among the pianists were Mrs. Vincent Astor, and Helen and Priscilla Choate.  The vocalists included Mrs. Clarence H. Mackay, Mrs. Leland Harrison, and Mrs. J. Robert Hewitt.

The following year months of entertainments for daughter Rita’s introduction to society began.  On June 14, 1932 she returned on the Europa from Florence where she had attended school for a year.   On December 4 The New York Times said “Among those who will make their formal bows this week is Miss Rita Michell…who will meet the older friends of her parents on Tuesday at an afternoon reception at the Mitchell home, 934 Fifth Avenue.”  The newspaper reminded readers “Miss Mitchell took a prominent part in the social activities last Summer in Southampton, her special interest being in the little inmates of the Southampton Fresh Air Home for Crippled Children, for whom she gave a lawn party and entertainment at Overdune, the villa of Mr. and Mrs. Mitchell that faces the ocean.”

While the afternoon reception was for “older friends,” a supper dance on December 26 was “limited to the younger friends of the family.”

By now the Government was closing in on Charles E. Mitchell.  Investigations showed he had made illegal stock trades and speculated in his own bank’s securities.   He stepped down from his position as Chairman of the National City Bank amid the scandal.  Then at 9:00 on the night of March 21, 1933, he was arrested in the Fifth Avenue mansion, charged with income tax evasion of $657,152.40 on his 1929 income of over $2.8 million.

To the shock of many, three months later Mitchell was found not-guilty of tax evasion.   He wept in court when the verdict was read.  But the ordeal had taken its toll on the once-proud financier.  During the six-week trial he lost 24 pounds.  On the morning of June 23 he left No. 934 Fifth Avenue for Southampton for “an indefinite stay and a long rest.”

Despite his acquittal, Sunshine Charley’s world had collapsed.  The New York Times noted “It was not regarded as likely in Wall Street that he would return to the National City Bank, the chairmanship of which he resigned last February.”

In 1936 the United States Government placed a lien on the Fifth Avenue mansion.   The Mitchells stayed on for three more years, finally relinquishing title to the property in 1939.  The house was closed up and remained vacant for several years, “but has been kept in good repair,” said The Times on March 26, 1942.

That was when the French Government purchased the mansion for $500,000 for its Consulate General.  “Alterations will be made to the interior before it is occupied by the French Consul General and his staff,” reported The Times.    The renovations were done by William Van Alen, best known for his design of the Chrysler Building.

The French Consul would have to wait a few years, however, as World War II delayed the move into No. 934 Fifth Avenue.  The consulate would not move into the house until 1952.

In the meantime, it became the headquarters of the Centre d Etudes Superieures Franco-American.  In 1945 France announced that 100 French scholars each year would be sent here for cultural “team-work” with the United States.     The house was used for various exhibitions, art shows, and cultural events.

In 1952, after the French Government purchased the former Payne Whitney residence at No. 972 Fifth Avenue to house the French Cultural Services, the Mitchell mansion formally became the French Consulate.  Throughout its more than half a century in the house, the government has carefully preserved both the exterior integrity and interior appointments.   Only two of the original interior details have been lost—the dining room fireplace was removed in 1955 and in 1964 construction resulted in the loss of a fresco in the entrance hall. 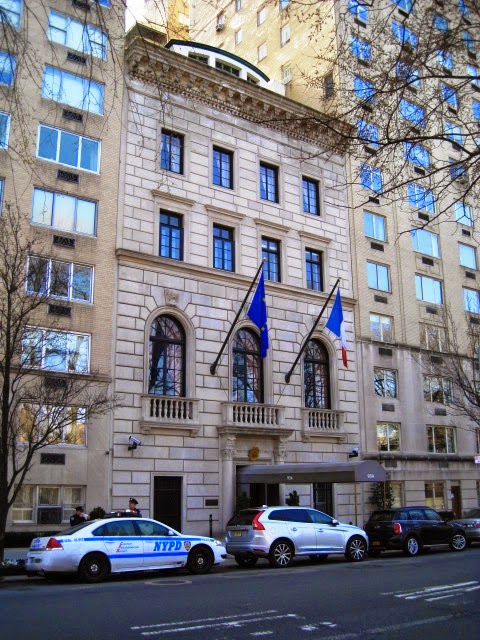 The last grand house to be constructed on the block, the Mitchell mansion is the last to survive.   Flanked by two massive apartment buildings, it is the legacy of a man whose unlikely rise to fortune and power was matched by his catastrophic fall.