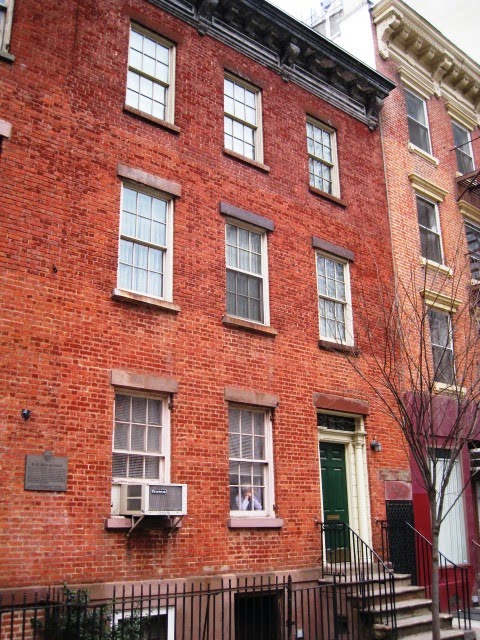 In 1791 Aaron Burr purchased a portion of the former Nicholas Bayard farm, north of the city and near the small village of Greenwich.   Abutting his acquisition was the country estate, Richmond Hill, with its grand mansion erected in 1760 by British Major Abraham Mortimer.  Since 1789 the estate had been used by John and Abigail Adams as the Vice Presidential mansion.

Burr’s wife died in 1794 and he moved into the Richmond Hill mansion in 1797 where his 14-year old daughter Theodosia acted as hostess.   Around the time he was elected Vice President in 1801, he planned development of the Bayard farm holdings.  Burr laid out streets and building plots and in 1802 sold one on Locust Street to Anthony Bowrosan.

Life would change for Aaron Burr two years later when he fatally shot Alexander Hamilton.  On July 27, 1804 a New York newspaper wrote “He has for the present, and we trust forever, fled from the city and the State.”  The Richmond Hill mansion was abandoned; and, ironically, Anthony Bowrosan later opened a tavern and entertainment garden in the home.

In the meantime he sold his building plot to carpenter David Mulford in 1807, and Locust Street was renamed in honor of Revolutionary War General John Sullivan.   Three years later Mulford erected a wooden back building on the lot.  It would not be for another nine years, in 1819, that construction was completed on the brick-faced house at No. 83 Sullivan Street.

A near mirror-image of its neighbor constructed simultaneously at No. 85, it was a bit wider owing to the horse walk that provided access to the back lots for both homes.  Two and a half stories over a shallow, brownstone clad basement, the working class home boasted elegant features.  The architect designed its handsome doorway to be slightly wider than its neighbor’s.  It was a subtle detail that preserved visual proportions, necessitated by the different widths of the homes..

The six-paneled door was flanked by simple wooden columns that fronted and enframement carved to resemble rusticated stone.  Above, a delicate leaded transom allowed daylight into the entry hall.  Simple brownstone lintels and sills contrasted with the red brick.  Above, prim dormers perched above the cornice.

Mulford and his wife had four daughters, Margarette, Elizabeth, Caroline and Eleanor.   But before long they would rent out at least one room.  In 1842 the unmarried Cecilia Miller lived with the family.  She was a teacher in Public Primary School No. 30 at the corner of White and Centre Streets.

By 1855 Thomas Reynolds rented a room in the house.  Listing his occupation as “hatter,” he was a wholesale importer of fashionable hats with a shop at No. 167 Pearl Street.  He also served as a volunteer firefighter at the M. T. Brennan Hose Company No. 60 at the corner of Elm and Leonard Streets.

David Mulford’s widow was still in the house in 1858 when it was the scene of Elizabeth V. Mulford’s marriage to John D. North of Hastings, Minnesota on Wednesday, August 25.

Four years later G. W. Frances lived here when his name was pulled in the Union Army’s draft lottery.  And in 1867 Catharine Kane, who taught in the Boys’ Department of School No. 8 at No. 66 Grand Street, was renting a room.

By 1874 Edward Elliott owned No. 85, the year that he raised the attic to a full floor.  In 1880 he owned the Mulford house, too.  That year he hired builder Richard Wall to increase the height of this house, as well.  The project cost him $800—nearly $19,000 today—but the extra income from additional rentable rooms no doubt made it financially sensible.

The neighborhood, by now, had been engulfed by Greenwich Village and saw the arrival of a variety of European immigrants.  Among them the German-born Fritz Giesemann who moved into No. 83 Sullivan Street.  On August 24, 1881 he traveled to Brooklyn where he jumped into the river at the foot of Dike Street and drowned.  The New York Times explained the apparent suicide by saying “Giesemann was partially insane.”

The working class residents of the house in 1883 included Ferdinand Kochler, a house painter.  Edward Elliott seems to have maintained his properties well.  In September 1885 he demolished the two-story extension in the rear and filed plans to replace it with a new structure designed by architect J. Thompson.  Elliott spent $1,250 for the improvement.

The family of little Celestine Graffini was no doubt filled with pride when the girl’s name appeared in The Evening World on June 9, 1888.  She was pointed out for her meritorious school work in Grammar School No. 8.

One immigrant resident who made a name for himself was John Aquaro.  In 1889 he graduated from Columbia University’s College of Physicians and Surgeons and in 1899 he was among the founders of the Italian Medical Society of the City of New York.

Dr. Aquaro would live at No. 83 Sullivan Street for years.  During the first decade of the 20th century he was listed as “interested in General Medicine;” but by 1916 he was appointed physician of the Corrections Department.  He was still living here at the time.

The doctor’s choice of neighborhoods made sense.  Once a mixed bag of nationalities, the Sullivan Street block was now part of New York’s Little Italy.  Another resident, Robert C. Papini, joined the United States Army as the country entered World War I.  In 1919 Sgt. Papini’s name appeared on the Casualty List in New York newspapers; the gravity of his wounds “undetermined.”

Stephen Puczetti, like Papini, fought for the United States.  Born in Northern Italy, he was just 22 years old when the war ended.    Six years later he ran a small produce market in Queens and lived with his wife and two children in No. 83 Sullivan Street.

On Saturday, September 27, 1924 he received a soldiers’ bonus check for $150.  To celebrate his windfall, he invited several friends, including his father, to dinner in a MacDougal Street restaurant.   Afterward, the group disbanded and Puczetti headed home to No. 83 Sullivan.  The New York Times reported two days later, “He had not gone a block when one of his friends, Joseph Aloise, of 105 West Third Street, heard four shots.  Hurrying back he found Puczetti lying on the sidewalk.  He died in the arms of his father while going to St. Vincent’s Hospital in a taxi.”

The grieving father told police “his son had not a known enemy.”  None of the group saw the assailant.

The house continued to be home to blue collar residents.  Louis Vetere lived here with his wife, Marie, and five children when he died on August 15, 1937.  His meager estate of $550 (about $9,000 in today’s dollars) went to his widow.

As Sullivan Street changed, the Mulford house and its next door neighbor did not.  Astonishingly, their doorways, the ironwork and the historic wooden-sashed windows survived.  The houses present an unexpected slice of early 19th century life in an area transitioning from farmland to city.