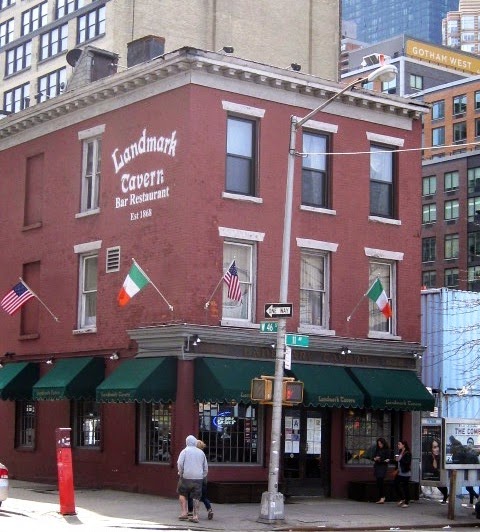 The sparsely developed district on Manhattan’s West Side would forever change when the Hudson River Railroad laid tracks up Eleventh Avenue in 1849.  Quickly industries developed that could take advantage of the new transportation—tanneries, breweries, and riverfront businesses.  The neighborhood filled with impoverished immigrants, many of them Irish, drawn by employment and cheap housing.

With the increasing population came a need for small groceries, cobbler and pottery shops.  The hard-working residents were equally hard drinking; as were the rough-edged sailors.   James Clare’s saloon, diplomatically described by The New York Times in 1866 as a “liquor store and grocery,” appeared at the corner of Eleventh Avenue and 46th Street around the time of the Civil War.

The saloon at No. 626 Eleventh Avenue filled the ground floor of the three story vernacular structure.  Clad in red brick, the building was 25 feet wide and stretched 76 feet down 46th Street.  Lodgers rented rooms in the upper floors, accessed by a side door at No. 554 West 46th Street.  James Clare also lived here above his saloon.

Clare’s customers were little concerned with decorum and when five men arrived at the saloon at 10:00 on Sunday, July 15, 1866, a locked door did not dissuade them.  They simply banged on the doors until Clare opened up for them.  He would regret accommodating the men.

The New York Times reported two days later, “Clare opened the door and gave them drinks, after which he was about giving them some segars, when one of the party threw a large stone at him, cutting him on the head and causing a terrible wound.  The stone glanced from the man’s head and struck a mirror behind the bar, smashing it into fragments.”

Before James Clare could react, he was attacked again.  “Not content with this, another of the ruffianly gang threw a second stone at Clare, but it fortunately missed him.”

Saloon keepers in the neighborhood that would earn the name Hell’s Kitchen were as tough as their customers.  Clare grabbed an ice pick and thrust it into the shoulder of Thomas Comey, causing a severe wound.  “This defence had the effect of making the rowdies run off, when Clare shut up shop and summoned a doctor,” said the newspaper.

While the doctor was attending to Clare’s head wound, Comey went to the 47th Street police station and filed a complaint against him for assault.  Officer Corey arrived at the Clare’s saloon and took him to the police station.  There, Clare filed a charge against Comey.  They were both arrested and held for trial.

Among the Irish lodgers upstairs in 1867 was Bernard Donahue, listed in the City Directory for New York as “laborer.”  By 1870 John P. Kinney had taken over Clare’s saloon.  Like his predecessor, he lived upstairs.   But his tenure here would be short-lived.  In 1872 directories noted that John McCrystal was running the saloon and living overhead.   McCrystal would run the operation at least until 1878. 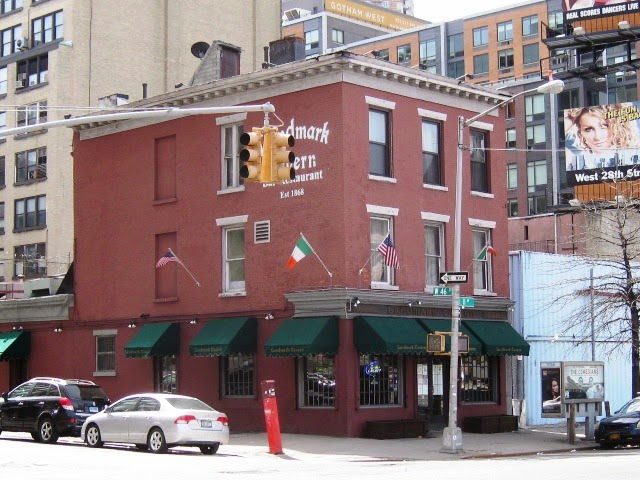 While the patrons John McCrystal dealt with were profane and dangerous; he was most likely little different.  Survival in Hell’s Kitchen required a saloon owner to be rough and, at least, borderline criminal.  In 1881 The New York Times described the area as “one of the most miserable and crime-polluted neighborhoods in this City,” adding “there is more disease, crime, squalor, and vice to the square in this part of New-York.”

Within a few weeks it would add “the entire locality is probably the lowest and filthiest in the City, a locality where law and order are openly defied, where might makes right, and depravity revels riotously in squalor and reeking filth.”

In the mid-1880s Louis Brengel was operating the saloon.  He preferred to list himself in business directories as a “Segar Dealer.”  Upstairs, in 1887, lived Richard J. Whalen whose physicality caused problems that year.

On December 29 Whalen visited the “club room” run by Edward Martin.  Such facilities were the Victorian version of today’s gyms.  Here men could box, use punching bags and Indian clubs, and release stress while keeping fit.  That afternoon Whalen got into a wrestling match with Albert J. Butler.

Butler did not survive the match.

Coroner Levy held an inquest on January 3, 1888 to look into the death.  Although the testimonies of Hell’s Kitchen cronies were always suspect, The Sun reported “a number of witnesses swore that Butler received his injuries accidentally.”   The Coroner seems to have been only partially convinced.  He “paroled Whalen on his own recognizance.”

In the years just prior to America’s entrance into World War I Patrick P. Prunty was operating the saloon.  It is most likely no coincidence that the last directory listing for him here is in 1917.  Prunty very likely saw the darkening clouds for liquor dealers as Congress passed a resolution to amend the Constitution to accomplish nationwide Prohibition.

No. 626 Eleventh Avenue became Carley’s Saloon, owned by Patrick Henry Carley.  Although it remained opened for some time as a speakeasy and was reportedly a favorite of film actor George Raft who grew up in the neighborhood; Prohibition agents eventually closed down Carley’s Saloon and it sat boarded up for years. 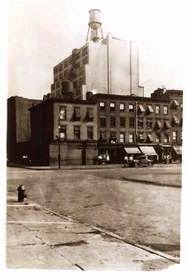 But not long after Prohibition was repealed in 1933, the old bar at No. 626 Eleventh Avenue reopened.   The freight trains had continued to run up the middle of the avenue until about 1930.  The Hell’s Kitchen neighborhood did not see significant improvement until the latter part of the century.

In 1989 the building was converted to “eating and drinking” on the first floor and the upper floors, where criminals, sailors and prostitutes once rented rooms, were converted to dining rooms for the restaurant below.  The Landmark Tavern briefly closed in 2004; but was reopened a year later by Michael Young and Donnchadh O’Sullivan.  Despite its inconvenient location, they refurbished the mahogany paneling, the mosaic floors, the tin ceilings and the massive one-piece wooden bar.
Where “ruffians” shattered the barroom mirror with a rock in 1866, patrons now dine on Scotch eggs and Egyptian Dukka-crusted halibut.   The lonely survivor of Hell’s Kitchen’s less grittiest days sits little changed on a more industrial Eleventh Avenue.