Despite New York City's heavily Protestant beginnings, by the turn of the 19th Century the Roman Catholic population was burgeoning and had earned a bishop.   The diocese commissioned French-born architect Joseph-Francois Mangin to create the first Catholic cathedral in America.  Mangin, in partnership with John McComb Junior, had recently completed the design of City Hall.  The cornerstone of the cathedral was laid on June 8, 1809 and the completed church was dedicated six years later on May 14, 1815.

Mangin's finished structure on the corner of Prince and Mott Streets reflected the influence of his French heritage in a decidedly Federal design.  Two quasi-towers rose on either side of the entrance forming a broken pediment pierced by an enormous gothic window with graceful mullions.

The New York Gazette reported upon its opening that it was "a grand and beatiful church, which may justly be considered one of the greatest ornaments of our city..."

Named for the patron saint of Ireland, anti-Irish prejudice threatened it nearly from the start.  In response the Ancient Order of Hibernians established its headquarters across the street from the cathedral, for one reason, to protect it.  That protection became necessary in 1844 when anti-immigrant and anti-Catholic mobs moved on the church in an attempt to burn it.

Bishop John Hughes assembled the Hibernians and other parishioners behind the brick wall surrounding the cathedral.  The defenders punched holes in the wall for their muskets and fought back the rabble who were chanting "paddies of the Pope" and other deriding slogans.  Nevertheless, the crowd managed to smash many of the fine glass windows with flying bricks and stones.  Not to be intimidated, the Bishop wrote to Mayor James Harper threatening "Should one Catholic come to harm, or should one Catholic business be molested, we shall turn this city into a second Moscow," referring to Napoleon's somewhat recent seige of that city.

As the decades passed, St. Patrick's burial yard and the crypts and tombs in the labyrinth below the church became the final resting place of early New York notables.  Buried here is Haitian-born slave Pierre Toussaint, currently being considered by Rome for sainthood.

Although his was the largest church in the City, Bishop Hughes yearned for a more magnificent cathedral.  The plot of land on 5th Avenue and 50th Street, around which brownstone mansions had already begun appearing, was purchased in 1852.  Nevertheless, that same year he had eminent organ-builder Henry Erben install a new pipe organ in the existing church.

Work on the new James Renwick-designed cathedral started in 1859 but it would be nearly two decades before it was completed.  Meanwhile the congregation downtown grew.  On April 1, 1861 The New York Times reported on the crowds at Easter mass.  "Many persons were obliged to depart without having effected an entrance to the building, and the patience of the obliging Seaton and his corps of assistants was sorely tried by the persistent and sometimes obstreperous applications for admission, so eager was the desire of the Catholic population to participate in this service." 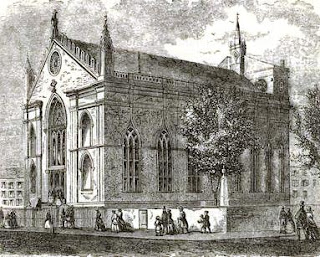 A raging fire ravaged the Cathedral in 1866 and, despite construction continuing uptown, the cathedral was rebuilt.  Henry Engelbert was brought in to reconstruct the old church.  Although he is best known for his grand Second Empire buildings, he brought St. Patricks back as a boxy Gothic structure, re-dedicated in 1868.  Gone were the twin towers and the main Federal-style window, but St. Patrick's emerged with the comfortable, inviting feeling present today.  As the cathedral neared completion Henry Erben rebuilt the organ which, with its Gothic-Revival cabinet, is still in use. 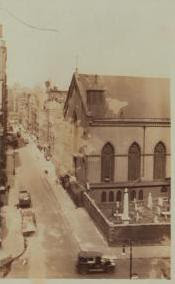 When the 5th Avenue Cathedral was dedicated in 1879 the Mulberry Street cathedral became a parish church.  The neighborhood today is a mixture of cultural heritages and ethnicities and Old St. Patrick's remains a vibrant element of that community.  The striking interior of the church was used for the filming of the baptism scene in The Godfather as well as for the scene in The Godfather Part III when the Church bestows an honor upon Michael Corleone.

The church was elevated to basilica in December 2010. 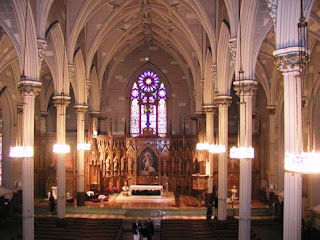