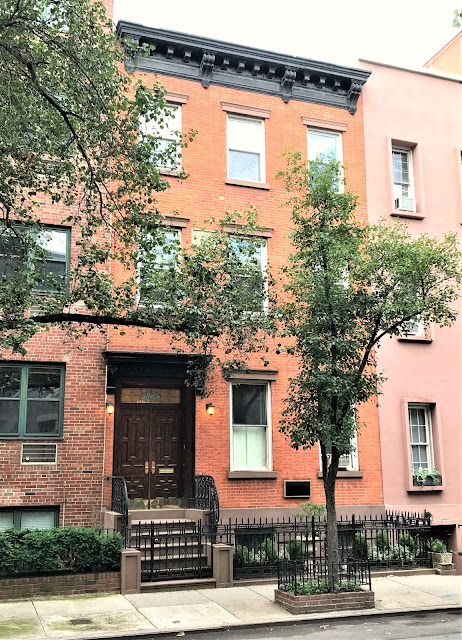 By 1842 Samuel T. Andrews was living in the new brick-faced house at 224 West 19th Street.  (It would be renumbered 324 in 1868).  Although he was listed in directories as "teacher," he apparently worked for a high-end institution.  Such a position would have afforded him the means to occupy the handsome, 21-foot wide, three-story house.
A transitional step from Greek Revival to Italianate, it featured a brownstone-clad basement and stoop, double-doored entrance and bracketed cornice.  The stoop railings, quintessentially Greek Revival in design, were show-stoppers.  Cast iron rings embraced by palmettes, or anthemia, formed the panel designs, over which the railing swept dramatically down to the lower step of the paneled stone wing walls.  There were, no doubt, originally decorative iron baskets or similar newels perched upon the lower walls. 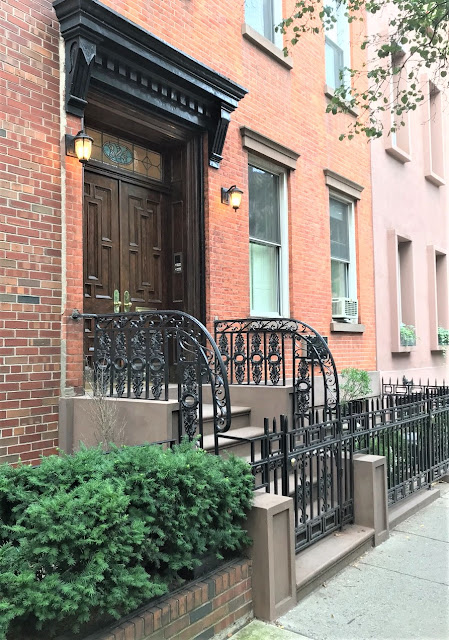 The house was offered "for sale or to let" in March 1844.  The advertisement touted, "The above is a very convenient, modern built house, in the immediate vicinity of three lines of stages."  It added, "Also to let, a frame stable in the rear of the above premises on 18th street."
Auctioneer George N. Crawford purchased the house, remaining only for a few years.  By 1851 it was home to Samuel Adams Lawrence and his wife, the former Catharine Remsen.  The couple had three adult children, Julia, Henry and Horace.
Lawrence was born on January 19, 1775.  Although he initially studied medicine, he changed career paths.  In his 1908 The New York of Yesterday, historian Hopper Striker Mott wrote, "He became an extensive importing and commission merchant, widely known and highly respected at home and abroad."  He was a partner in Augustine H. Lawrence & Co. and a director of several corporations and institutions. 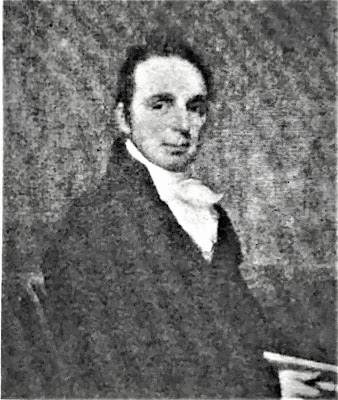 Samuel Adams Lawrence, The New York of Yesterday, 1908 (copyright expired)
Catharine was the daughter of John and Dorothea Remsen.  She and Samuel were married on November 26, 1803 and had 11 children. 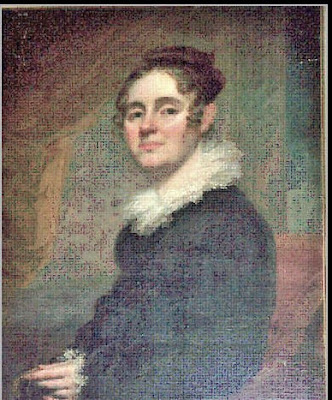 Catharine Remsen Lawrence, from the Julia Lawrence Hasbrouck Collection
The Lawrences had a summer home in the Bloomingdale section of Manhattan far on the upper west side of the island.  Among the frequent guests there was Lawrence's close friend De Witt Clinton.
Lawrence used his significant fortune for various worthy causes.  Hopper Striker Mott said, "Ever ready with his means and efforts to ameliorate the condition of the poor, he was also a strong advocate of the cause of education as well as a munificent patron of the arts and sciences."
Samuel Adams Lawrence died in the West 19th Street house on August 5, 1851.  He was 76 years old.
Living with their mother at the time were sons Eugene, who was an attorney; and Henry, who dealt in real estate.  It was apparently Henry who placed an advertisement in Scientific American in 1852, offering to fund a struggling inventor.  His proposal came with almost unbelievable stipulations, however:

$1000--Will be advanced, on good security, in aid [of] some generally useful and valuable patented invention, American or Foreign, that will yield a net profit, of at least 500 per cent on this sum within three months, in daily or weekly cash returns, without any personal care, labor, or liability on the part of the subscriber.  All interest in patent and profits of business to be equally divided.  Address "L," 224 West 19th st.

Catharine sold the house in 1856 to James Cowl.  (She did not go far, however, moving to 340 West 19th Street where she died on April 24, 1867.)   The Cowls' son George Gorham Cowl, was 16 years old when they moved in.  In 1863, the last year they lived in the house, he was a freshman at the Free Academy in New York City.
The family of Joseph Augustus Phillips followed the Cowls at 324 West 19th Street.  Joseph is listed in directories first as an inspector, then in 1871 as "agent," both somewhat nebulous terms.  Son Joseph, Jr. was attending the Free Academy in 1869 and by the following year George Phillips ran a liquor business.
Also living in the house were daughter Jane Emma and her husband Oscar Tibbals.  The couple were married in 1851.  Oscar was a partner in the dry goods firm of S. A. Beekman & Co. and a director in the Grocers' Bank.
In 1873 the country was devastated by what would be called the Long Depression, or the Financial Panic of 1873.  At least 100 banks failed and families found themselves with no food.  On February 19, 1874 the New York Herald entitled an article "Pictures Of Poverty" and described "Aged women and scantily clothed girls--many of the latter possessors of rare but unripened beauty" had joined "sick and maimed" men who thronged the courtyard of St. John's Chapel on Varick Street for handouts of food and clothing.
The article noted, "Mrs. Oscar Tibbals (wife of one of the partners in the great firm of S. A. Beekman & Co.), has already organized a society at her residence, in Nineteenth street.  This society is known as 'The Helping Hand,' and yesterday forwarded a large quantity of clothing to St. John's Guild for the down-town poor."
A month later the newspaper followed up, reporting, "Another large contribution was received from the Helping Hand Society...through Mrs. Oscar Tibballs [sic], consisting of children's clothing, which had been made by the fifty lady members comprising this society, who have passed their evenings this winter in preparing clothes for the destitute little ones of our great city."  The article hinted, "This is worthy of imitation by ladies of leisure."
Well-to-do builder Warren A. Conover purchased the house in 1876.  It was most likely Conover who updated it with a neo-Grec cornice above the doorway and new entrance doors.
He was highly regarded in the construction and real estate circles.  In 1892 he was nominated for president of the Building Trades Club.  Two years later the Municipal Organization of the City of New-York was formed, described by The New York Times as "a new anti-Tammany association...representing the real estate, building, engineering, electrical and other interests of this city."  Warren A. Conover was elected secretary on the night of its formation.
A long-time member of the General Society of Mechanics and Tradesmen, he was elected president in 1895. 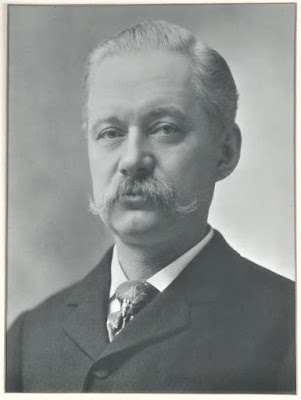 Warren A. Conover.  from the collection of the General Society of Mechanics and Tradesmen.

Like the women in the house before her, Conover's wife was involved in charitable causes.  Among them was the Chapin Home for the Aged and Infirm.
The Conovers remained in the house through 1897.  August Zimmer lived here the following year when John L. Shea, Commissioner of Bridges, announced he "has been promoted from the position of Laborer on bridges over the Harlem river to that of Bridge Tender on the Central Bridge, at a compensation of $750 per year."
The promotion reflected the changing dynamics of the West 19th Street block.  Upon the death of Samuel Adams Lawrence half a century earlier, his sons inherited "a fortune," according to Hopper Striker Mott.  Now Zimmer was earning a yearly salary equal to just about $23,500 today.
Against all odds, 324 West 19th Street escaped being converted to apartments until 1964, when it was renovated to two duplexes.   One of them doubled as John Clacy's School of Cooking and Baking in the mid- to late-1970's.
On September 8, 1976, in an article entitled "Those Proliferating Cooking Schools," The New York Times wrote, "An experienced chef, teacher and author, the instructor conducts solidly practical full participation courses in bread, pastry and cake baking, and in Christmas cooking." 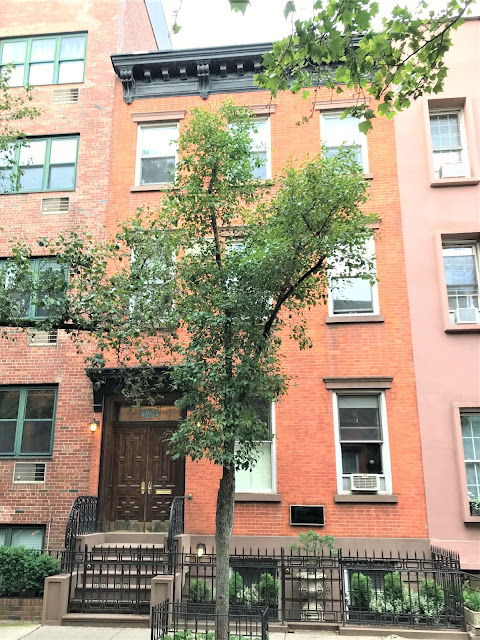 Once the home of well-heeled New York families, 324 West 19th Street is outwardly little changed.  And the stoop railings still warrant an appreciative pause.
photographs by the author
LaptrinhX.com has no authorization to reuse the content of this blog
Posted by Tom Miller at 1:23 AM