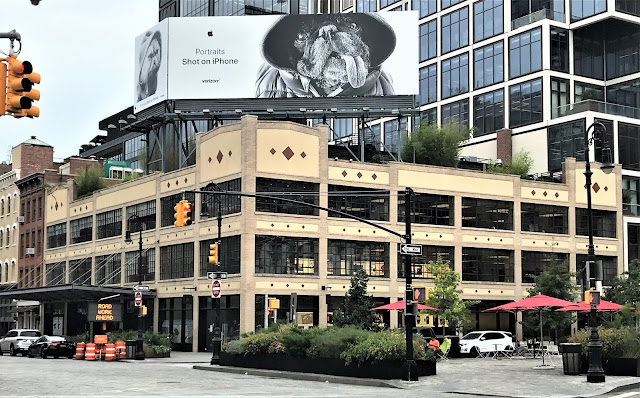 Despite having permanently stormed off to England with his family in 1891, William Waldorf Astor continued to control his vast real estate holdings in New York City.  He had inherited a significant amount of property in the west side area, including the long northern blockfront from Ninth to Tenth Avenue.
Astor died on October 18, 1919.  His estate soon began liquidating the Manhattan holdings and on November 25, 1922 the Real Estate Record & Guide reported, "Estate of William Waldorf Astor sold twenty parcels in West Forty-fifth Street and also a Ninth Avenue and Fourteenth Street corner to operators."  The buyers of the Chelsea corner were James S. Maher and John J. Gillen.
Maher had started out as a builder in the construction firm founded by his father, John Maher.  But around 1899 he added architect to his resume, opening his own practice and designing several industrial buildings in the West Side market district.  He frequently partnered with developer John J. Gillen on projects.
The old buildings on this parcel--401 and 403 West 14th Street and 47 through 59 Ninth Avenue--were demolished.  In their place Maher designed what the Department of Buildings described as a "three-story storage building."  Seemingly as much glass as masonry, Maher's Arts & Crafts style structure must have seemed ultra-modern among its red brick Victorian neighbors.
The use of steel framing allowed for vast expanses of glass that flooded the interior with daylight.  Maher gave interest to what might have been an unexciting rectangular box by placing tall parapets at the corners.  The minimal decoration took the form of brick-framed stucco panels and terra cotta diamonds.
The new building sat within the Gansevoort Market district, established by the city in 1884.  Like all the buildings, 401 West 14th Street would be home to wholesale food merchants.  Upon its completion, George Cook Poultry Corp., dealers in "dressed poultry," moved in.
Sharing the building by the early 1930's was the butcher operation of Charles Wissmann Company.  The firm had been founded in 1906 by brothers Charles and Louis Wissman.
The large scope of the George Cook Poultry Corp. was evidenced upon George Cook, Sr.'s death in 1943.  His estate was valued at around $4.5 million in today's dollars and George, Jr., who had been in business with his father for decades, received the equivalent of nearly $2 million in company stock.
The 1960's saw the New York Loin Corp. and Joseph Kenney meat purveyors in the building.  On May 20, 1968 New York Magazine wrote, "Behind some of those 19th-century facades in the Gansevoort Meat Market (in the West 14th Street area) you'll find a relatively new kind of veal, called plume de veau."  The article said that until 1960 "New York's finest restaurants ordered their mild-fed veal from Europe, but today Joseph Kenney, 401 West 14th Street, supplies almost all of New York's notable restaurants with plume de veau." 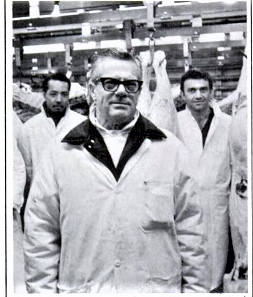 Joseph Kenney posed with his staff (and a lamb carcass) in 401 West 14th Street in 1968.  New York Magazine, May 20, 1968.
After decades of housing only wholesale dealers, around 1975 Frankie's Meat & Food Warehouse opened in 401 West 14th Street.  Consumers willing to travel to the gritty area and to buy in bulk were rewarded with bargain meat prices.  In December 1978, for instance, a 15-pound bag of chicken legs sold for 59 cents per pound.
Frankie's Meat & Food Warehouse was a destination spot for years.  It was replaced around 1991 by Western Beef, which advertised itself as "The Meat Supermarket."  And like Frankie's Meat & Food Warehouse, consumers traded the inconvenience of the location and the bulk-buying requirements for low prices.
By 1999 the Chelsea neighborhood was seeing change as beef and poultry firms were gradually being nudged out.  Markt opened in 401 West 14th Street in the last week of December 1998.  A week later The New York Times's food critic, Florence Fabricant, said it was located "in what is becoming a Belgian enclave, across the street from a Petite Abeille café and near Waterloo Brasserie."
The former meat market had received a drastic make-over.  Fabricant said, "Markt's look is all-brasserie, with dark wood, etched glass and vintage beer posters.  Mussels and other seafood, with frites, of course, are among the Belgian specialties on the menu, created by the French-trained Edward Pryor."  The dizzying wine menu listed 250 labels.
The first years of the 21st century saw the transformation of the former meat packing district nearly complete.  The first stage of the High Line park began in 2006.  That same year Apple, Inc. purchased the building.

The architectural firm of Cookfox was hired to renovate the abused structure.  Energy-efficient replacement windows were installed, terra cotta tiles and the stucco panels were repaired and cleaned.  According to the firm's website, "Several thousand damaged Hebron bricks were replaced with originals discovered in a Midwestern brickyard."  A new canopy of corrugated glass echoed the original corrugated metal roof over the old loading dock.
photographs by the author
no permission to reuse the content of this blog has been granted to LaptrinhX.com
Posted by Tom Miller at 1:05 AM