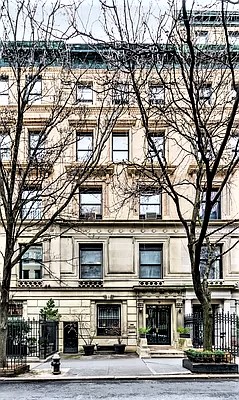 photo via streeteasy.com
In 1894 architect Henry Anderson designed a row of four dignified rowhouses on East 82nd Street, between Fifth and Madison Avenues, for developer Daniel Hennessy.  Completed the following year, their entrances sat within a rusticated limestone base above a two-step porch.  The Greek motif of rosettes and triglyphs in the entrance entablature reappeared in the second floor frieze, as well as the frieze below the copper cornice.  The three uppermost floors were faced in yellow brick and trimmed in elaborate terra cotta.
According to the New York Herald on November 24, 1897, Ellen Prentice Kellogg purchased 9 East 82nd Street "for about $74,000."  (The purchase price would equal about $2.4 million today.)  Ellen was the widow of stockbroker Charles Kellogg, who had died in 1892.  She lived in the house next door, at 11 East 82nd Street, which she bought in 1895.
Ellen Kellogg leased 9 East 82nd Street to Albert Gould Jennings and his wife, the former Suzanne Beatrix Crimmins.  The young couple had been married in 1894.  The location of their rental home was perfectly situated for watching the on-going construction of their mansion across the street at 2 East 82nd Street.
The couple moved into the new residence in the first weeks of 1900.  On February 3, The New York Times reported, "Mrs. Albert G. Jennings will give a large reception in the afternoon at her residence, 2 East Eighty-second Street."
Ellen Kellogg next leased 9 East 82nd Street to the family of Henry Francis and Lena Marianna Cook.  Then, in 1906, she sold it to her only son, John Prentice Kellogg and his wife, the former Ethel Thornell.  At the same time, Ellen sold her son the Kellogg family house in Newington, Connecticut.  The Georgian-Federal style structure had been built around 1808 for General Martin Kellogg. 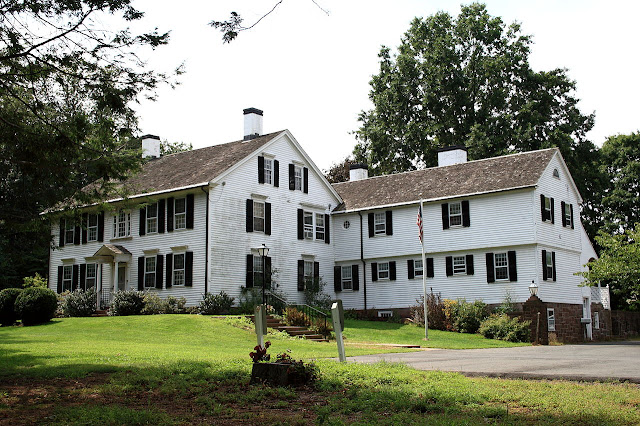 John Prentice Kellogg purchased the ancestral Kellogg house from his mother in 1906.  photograph by Sage Ross
Born on January 27, 1878, John Prentice Kellogg had graduated from Princeton University in 1900.  The Princeton Alumni Weekly later said, "After traveling around the world he became associated in the banking business with the firm of Strong, Sturgis & Co., of New York City, and in 1902 became a member of the firm of Schmidt & Gallatin, bankers."  Kellogg rose to the top of his profession, becoming a governor of the New York Stock Exchange.  He and Ethel would have three children, Barbara, John, Jr., and Claire.
With America's entrance into World War I, Kellogg became focused on domestic security.  He organized a fleet of patrol boats to police New York Harbor, and became head of the Marine Section of Home Defense in New York City.  He then enlisted in the New York State National Guard, serving as captain of the Motor Transport Corps until the end of the war.
During the winter season of 1918-19, the Kelloggs leased their home furnished to newlyweds John Sloane and Elsie Nicoll Sloane, who had been married June 23, 1917.
It may have been John Kellogg's health that prompted the couple's leaving New York City's cold.  He was suffering from pleurisy, an inflammation of the lungs resulting in severe chest pain.  He and Ethel Kellogg had barely settle back into their 82nd Street home when, on April 10, 1918, the 41-year-old suffered a fatal heart attack.
Ethel sold the mansion in April the following year to stockbroker John Hone Auerbach and his wife, the former Dorothy Pennington Toler.  Their residency was short-lived.  The sold the house in August 1921 to William Fitz Hugh Whitehouse for a reported $160,000, the equivalent of $2.3 million today.
Born in 1877, Whitehouse was married to Sybil Douglas.  The couple had two children, Adelaide Frances and William, Jr.   Whitehouse had been the roommate of Alfred Gwynne Vanderbilt at Yale University.  He was perhaps best known as an explorer of Africa.  According to the 1902 book, Through the Country of the King of Kings, he was the first white man in an unknown region "south of the chain lakes." 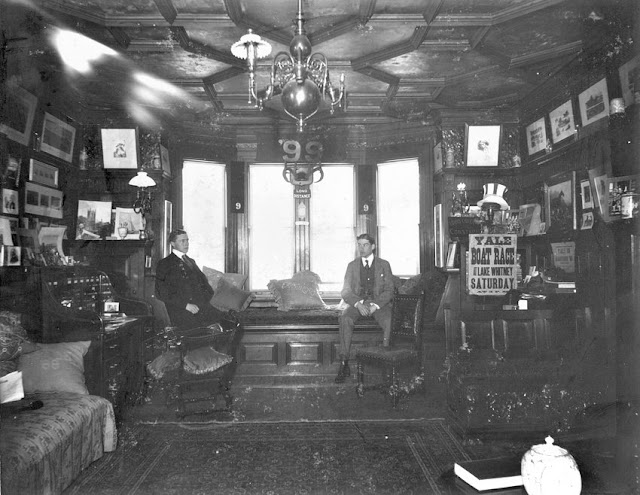 Whitehouse (left) and Alfred G. Vanderbilt relax in their comfortable dorm room in 1899.  from the collection of Historic New England.
Like their predecessors in 9 East 82nd Street, William and Sybil Whitehouse were prominent in high society.  There were listed as numbers 357 and 358 of "The 400" in the 1904 The Ultra-Fashionable Peerage of America.
William's mother had lived in Paris for a number of years.  Nearly every year the family traveled to France to visit.  On March 11, 1924, for instance, the New York Evening Post reported, "Mr. and Mrs. William Fitz Hugh Whitehouse, of 9 East Eighty-second street, will sail for Europe on April 2.  Their daughter, Miss Adelaide F. Whitehouse, and their son, Mr. William F. Whitehouse, jr., will accompany them.  They will go to Paris to visit Mrs. Whitehouse."  The article assured its readers, "Mr. and Mrs. Whitehouse and their family will spend the summer as usual in Newport."
It may have been William's election to the State Senate in 1926 that prompted the sale of 9 East 82nd Street in March 1928 to Dr. Allan S. Blumgarten and his wife, Stella.
An endocrinologist, Blumgarten had served in the Medical Corps during World War I and was the author of several medical books.  Stella was a young widow when the couple met while she was doing Red Cross work in the war.   Their son, James H., was three years old when they moved into the 82nd Street house.
Blumgarten's talents went beyond medicine and writing.  An amateur stained glass artist, he designed and installed a window in the rear of the house executed in pastel colors.  Along with medical and musical symbols, it contains the quotation, "The vintage of wisdom is to know that rest is rust and that real life is in love, laughter, and work."
The 1940 census shows four live-in servants in the Blumgarten household, all of them in their 50's other than 31-year-old Catherine O'Donnell.  Following the Blumgartens in the house was Bridget McGovern, who died in 1953. 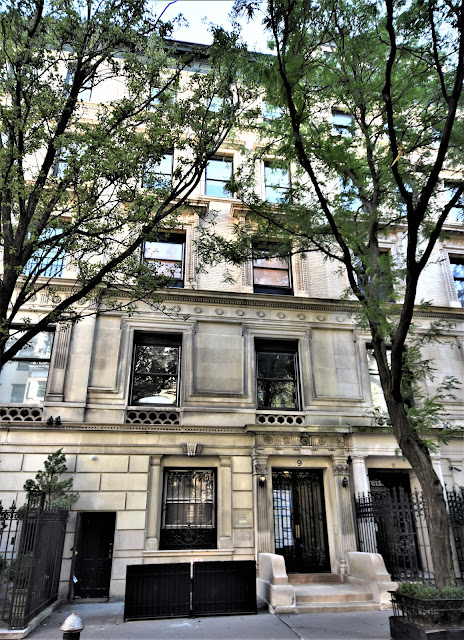 photograph by the author
The residence was converted to apartments in 1959 and by 1980 the ground floor became La Boetie Gallery, which remained until about 2014.  In 2015 the gallery Oliver Forge & Brendan Lynch was here.  A recent gut renovation returned 9 East 82nd Street to a single-family residence.
no permission to reuse the content of this blog has been granted to LaptrinhX.com
Posted by Tom Miller at 1:26 AM