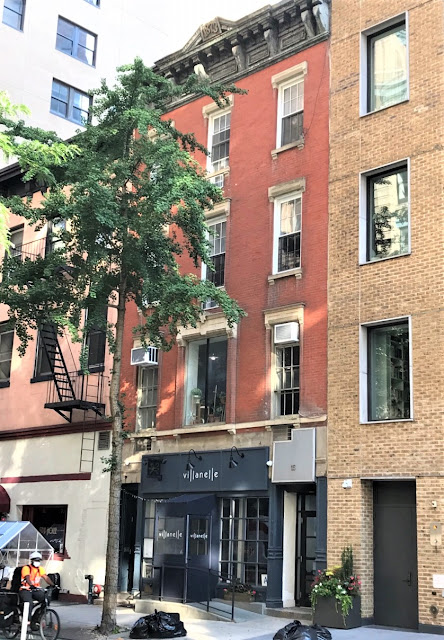 In 1873 a high stoop rose to what is today a centered window above the store.

Maria Titus owned the 25-foot wide house at 15 East 12th Street in 1870.  It sat within a fashionable neighborhood, just two blocks south of Union Square and half a block from Fifth Avenue.  On April 28 that year she sold the "elegant residence" to Thomas O'Connor for $18,000.  (The price would equal about $368,000 today.)  O'Connor renovated it into a French flat.  The term was used to differentiate upscale apartment houses--still viewed skeptically by most families--from tenement buildings.

The stoop was moved to the center of the building and stores installed on either side at ground level.  Stylish neo-Grec stone lintels now graced the openings.  The date of construction was announced within the pediment of the pressed metal cornice. 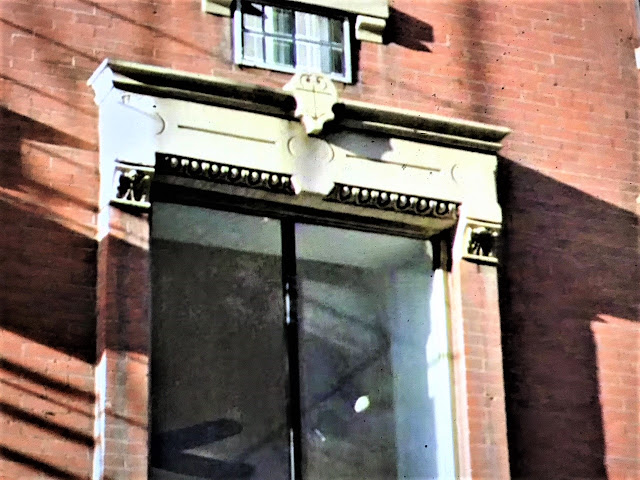 There were just three apartments in the building--one per floor.  O'Connor and his wife moved into one of them.  The suites were large enough for one tenant to sublet part of theirs.  An advertisement in the New York Herald on April 13, 1874 offered details of the apartments:

To Let--Part of a French Flat (four rooms) unfurnished, with use of kitchen, range, hot and cold water, washtubs, privilege of bath, water closet, elevator and all conveniences to a gentleman and wife; rent $35 per month; only one other family of two in the house, with other.

One of the ground floor spaces was initially leased to a grocery store.  Although it went out of business in the spring of 1874, it was immediately replaced by another.
On April 4, 1887 O'Connor sold the property to Katharine Best Prochazka for $30,500.   Born in Hessen, German in 1829, the widow had three grown sons, George, Ferdinand and John.  At least one of them, Ferdinand, shared the owner's apartment with his mother.
The Prochazka brothers were an interesting bunch.  George A. Prochazka was born in 1855 and at the age of just 12 studied chemistry in Germany.  He earned his Ph.D at the University of Heidelberg in 1874.  In 1881 George joined the dyestuff maker Heller & Merz and four years later married Henry Merz's daughter, Emilie.
John Prochazka also studied chemistry in Germany, while Ferdinand turned his attention to architecture, specializing in monument design.  His firm, Hoffman & Prochazka, moved its offices into one of the commercial spaces in 15 East 12th Street.  (Family ties briefly pulled Ferdinand away from monument design in 1889.  When his mother erected a water tank on the roof that year, the plans noted, "architect, F. Prochazka.")
Katharine's tenants were professional, like decorator Paul Sarazin  and his wife, who were among the original 1873 tenants.  The New York Times said that he lead "a quiet, orderly life and seem[ed] to have all the work he needed to live comfortably.  In 1888 Sarazin's wife fell ill.  Her condition deteriorated until he neglected his commissions so he could take care of her.  "The effort ran him down and got him into debt," explained The New York Times.
Sarazin's devotion to his wife took such a toll that soon after she was taken to the French Hospital, he, too, was admitted.  His wife died in the hospital and although he recovered and was released, his spirit was drained.  The New York Times reported, "Having no family and almost friendless he seemed to lose interest in affairs.  He spurred himself to sufficient energy, however, to clear off his debts, but his neighbors saw less and less of him.  From having been strong and industrious he became sickly and indifferent."
Sarazin mostly stayed in his apartment.  Other than going out to buy food and other necessities, he showed little interest in anything, including his work.  He walked out of the East 12th Street building on September 28, 1889 and never returned.  A week later The New York Times reported, "Since his disappearance Ferdinand Prochazka, the architect, whose mother owns the house, has tried to find him, but without success."  Ferdinand told reporters Sarazin possibly wandered off, "possibly finding shelter, but more likely in want, as he could not make himself understood in English, and, even if demented, his pride would probably restrain him from seeking alms."  The New York Times concluded its article saying, "If he may have died Mr. Prochazka would like to know that fact."  (It does not appear the decorator was ever found.) 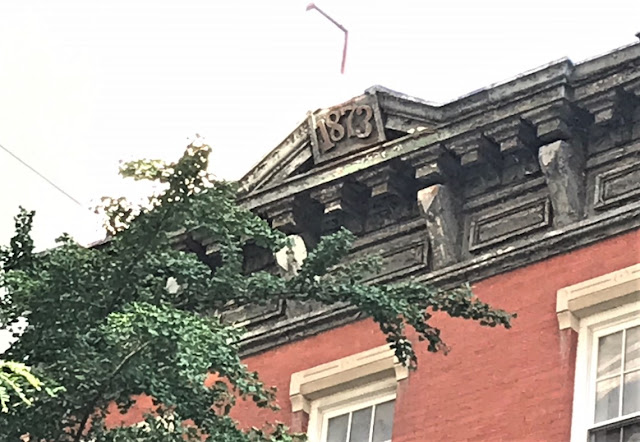 Thomas O'Connor proudly placed the date of his renovations above the neo-Grec style cornice.
Another tragic tenant was John Townsend, who arrived from England around 1891 and took the third floor apartment.   He had brought $3,000 with him to start his new life--a comfortable $88,000 in today's money).  But instead of finding a career, according to The Evening Post on October 28, 1892, "Townsend played the races."  The newspaper said he had squandered his entire savings.
When he was not heard from for several days, a friend went to the 12th Street building and Katharine Prochazka opened his door with her passkey.  The Standard Union reported, "Too proud to appeal to his friends for help, John Townsend, a young New York sporting man, would have died in his boarding house had he not been accidentally discovered by one of his former associates.  He was dangerously sick with peritonitis, hungry and without medicine to relieve his intense suffering."  He was taken to St. Vincent's Hospital where his condition was reported as serious.
In 1892 the grocery store closed and the space was taken by the New York office of British publisher Ward, Lock & Bowden.  In 1895 the firm began publishing Windsor Magazine, as well. 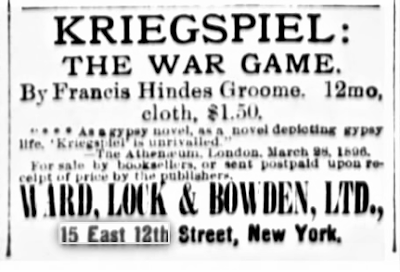 The New York Sun, April 18, 1896 (copyright expired)
The size of the commodious apartments was revealed in an advertisement in 1901:  "Nine rooms; rent $45; only three families in house."  The rent would equal about $1,400 today.
Katherine Prochazka died on November 13, 1904.  The East 12th Street property was inherited equally by her three sons.  Within the year, in August 1905, Ferdinand transferred his one-third share to his brothers (who, incidentally, had founded the Central Dyestuff and Chemical Company of Newark in 1898).
Ferdinand cut ties with his former partner before the year's end.  On January 1906 The Reporter announced "Ferdinand Prochazka has purchased his partner's interest in the firm of Hoffman & Prochazka and will continue it alone under the name of Ferdinand Prochazka Monument Architect."  He moved his office out of 15 East 12th Street.
The former upscale apartment building was converted to lofts.  Space was leased in August 1905 to the Bach Fur Company for a term of six years.  The firm obtained a license "to scrape and store skins" in the space.
A. A. Vantine & Co.'s "The Oriental Store" took another space.  Exotic gifts like Chinese porcelains, Japanese tea sets, Turkish rugs and lacquered ware, described as "Oriental delicacies," were sold here.    The Oriental Store moved to Union Square in 1912, and the space became home to Swiss Colours Company.  The dyestuff firm was most likely well known to their landlords, the Prochazka brothers.
In 1933 the building was renovated.  It was probably at this time that the stoop was removed.  There was now a single store on the first floor and apartments above.  A another remodeling completed in 1955 resulted in a luncheonette on the ground floor and two apartments each on the upper floors.
That configuration lasted until 1993 when the store became home to the Marquet Patisserie, the second floor was converted to offices, and there were now just one apartment each on the third and fourth floors.
Lynne and Jean-Pierre Guillot had opened the original Marquet Patisserie in Brooklyn several years earlier.  Florence Fabricant advised in The New York Times on January 13, 1993, "The new shop sells the fine French pastries and breads made in the Brooklyn store.  The bright, airy but narrow shop has a few temporary tables in front and back."  The café operated in the space into the early 21st century. 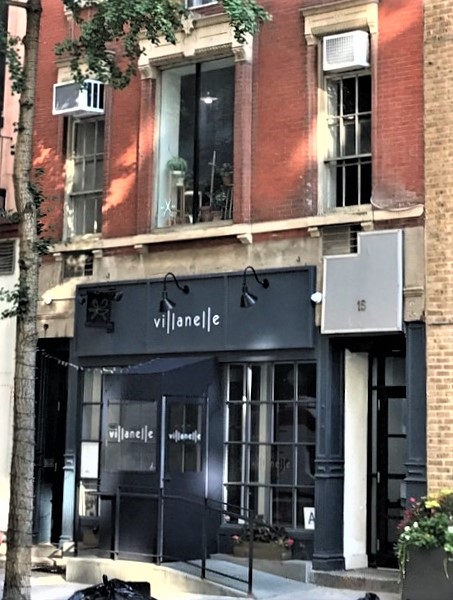 In 2017 Villanelle opened.  Once again Florence Fabricant reported on the opening, saying the restaurant's proximity to the Union Square Greenmarket was convenient for executive chef Nick Licata, "given his vegetable-forward menu."
photographs by the author
no permission to reuse the content of this blog has been granted to LaptrinhX.com
Posted by Tom Miller at 1:09 AM