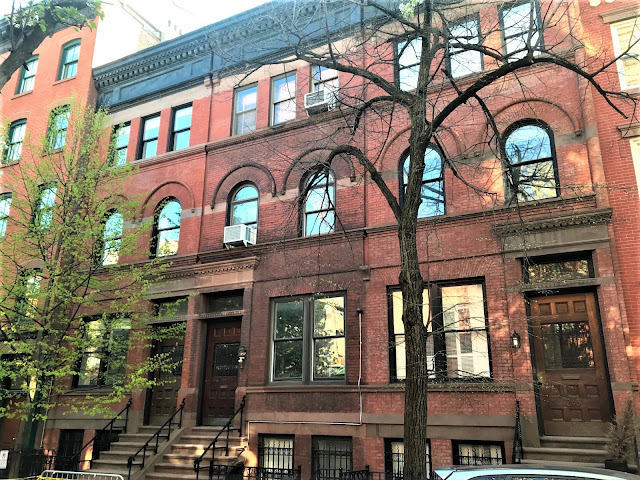 245 is the center house in the handsome trio.

In August 1886 Inspectors Hooper and Golden examined the sanitary conditions of Primary School No. 18 on Waverley Place, between Bank and West 11th Streets.  Their report was forwarded to the Board of Education "for necessary action."  It may have have been an early hint that the aging school building needed to be replaced.   It was demolished around 1887 and the following year John C. Barr began construction on three homes faced in Philadelphia brick, designed by 33-year-old William B. Tuthill--at the time known more for his singing abilities than his architectural skills.  (The following year, however, he would begin plans on Carnegie Hall.)

The 16-foot-wide houses were three stories tall above English basements.  The first and third floors exhibited elements of the Queen Anne and Renaissance Revival styles, but the second stories were purely Romanesque Revival.  Here delicate brick eyebrows rested upon carved stone corbels above magnificent radiant brickwork.  Beefy oaken entrance doors carried on the Romanesque motif.  The center house, 245 Waverley, shared its stoop and entrance enframement with its neighbor at 247.  Each of the houses wore intricate dentiled cornices. 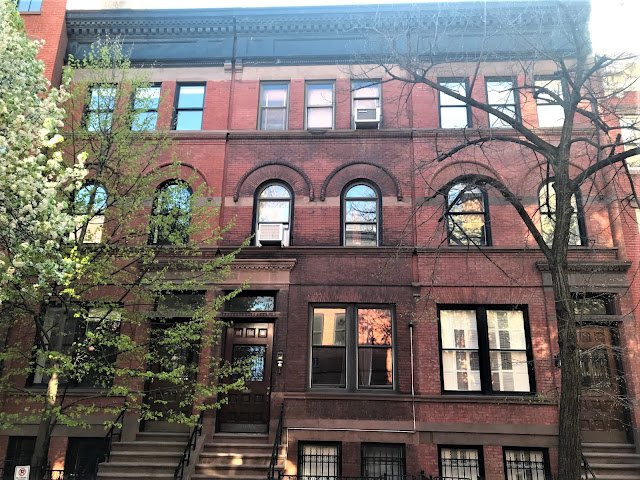 An advertisement described 245 Waverley Place as a "3-story, modern Queen Anne brick dwelling" with "hardwood finish, open fireplaces, sanitary plumbing, frescoed ceilings."  The 10-room house was sold to the widowed Emma D. Barr.
Living with Emma was her son, James Irving Barr.  He had been employed by Chemical Bank since 1870 and four years before he and his mother moved into the Waverley Place house he had been promoted to assistant cashier.
James took his time in finding a wife.  He was 37 years old in 1890 when he became engaged to "a Miss Gregory of West Seventy-sixth street," according to The Sun.   The groom-to-be rented a furnished house in anticipation of the wedding and everything was set for the ceremony on April 24.  Two days before the event James left the bank early, saying he felt ill.  The Sun reported, "He went to his home at 245 Waverley place, pneumonia set in, and he died."
Emma Barr now took in a boarder, Dr. Henry Granger Hanchett.  A respected physician, he was born in Syracuse, New York in 1863.  Soon after moving in, in 1891, he published The Elements of Modern Domestic Medicine.  He was the Chairman of the Committee on Public Health at the time.
Hanchett's expertise in medicine was equaled--or surpassed--by his passion for music.  He was one of the three organists of the Collegiate Dutch Church on Fifth Avenue and regularly lectured on music.  He addressed a "large attendance of strangers," as described by The New York Times in 1890, at the Academy of Anthropology.  The article said, "Dr. Blanchette announced his extreme disapproval of the present methods of church singing, popularly regarded."  He told the audience, "There is much which passes for music which cannot, even according to the most liberal conception of it, be correctly called music."
Eventually music won out over medicine.  Years later, in November 1918, Etude Magazine noted, "He became a physician in 1884, but his love for music was so great that he abandoned his medical work."  He went on to become what the magazine deemed, "one of the best known of American musical educators."
In April 1895 Emma Barr sold the house to Solomon S. Carvalho.  He paid $12,300 for the property--around $391,000 in today's money.  The purchase seems to have been purely an investment, for around two weeks later he sold it to Harry B. Venn, described by the Record & Guide as "a lifelong resident of the Greenwich Village."
Venn was cashier of Brokaw Brothers clothing firm and a director of the Oxford Sponging and Refinishing Works.   By 1899 the Venns took in a boarder, William Van Tassel.  The 70-year-old was engaged in the iron business.
Van Tassel attended a picnic of the Hoboken Turtle Club at Kingsbridge on September 21, 1899.  The elderly man had a bit too much to drink and when he alighted from an Eighth Avenue streetcar around midnight he "was intoxicated and almost helpless," according to The New York Press.  A small group of newsboys saw his plight and helped him to the sidewalk.
Just then John Ransom, who recognized Van Tassel, came along.  He hailed a cab and as he was putting him in the hansom Policeman Van Huskirk stopped him, suspecting Ransom was trying to rob the older man.  (And, indeed, Van Tassel had $1,000 in cash and diamond jewelry on him.)  Then, seeing his condition, the officer arrested Van Tassel.
Ransom tried to intervene, explaining he was a friend and was taking him home.  His good Samaritan intentions landed him in jail, as well.
By 1914 when Harry Venn was promoted to treasurer of Brokaw Brothers, Waverly Place had lost its second "e."  The family retained possession of the house until May 1920 when Harry sold it to Mildred C. and Anna R. Kastenbein.
The unmarried sisters were both long-time teachers in the public school system.  Mildred died in the house on July 22, 1937.  It is unclear how long Anna remained, but by the early 1950's 245 Waverly Place was home to English born painter and printmaker Stanley William Hayter. 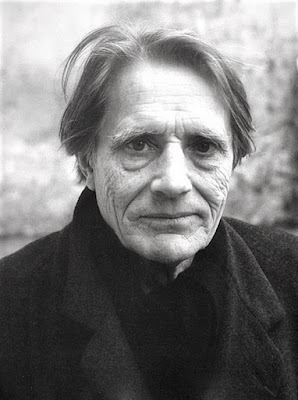 Stanley William Hayter, from the collection of the Los Angeles County Museum of Art
Hayter had founded the legendary Atelier 17 studio and school in Paris in 1927 (later known as Atelier Contrepoint).  Among the artists associated with the studio were Marc Chagall, Jackson Pollock, Mark Rothko, Alexander Calder and Pablo Picasso, to name a few.
A somewhat surprising occupant came around 1975 in the form of the Yazoo Record Co.   Founded in the mid-1960's by Nick Perls, the label specialized in blues, country and jazz music.  The company continued to work from the address after a conversion in 1977 resulted in 10 apartments.
In 1981 the studio initiated a clever marketing idea--music trading cards.  On April 24 that year The Journal-News reported, "Speaking of the blues, Yazoo Records, a small independent label, has issued what is destined to be a collector's item set of 36 trading cards called 'Herods of the Blues.'"  Artist R. Cumb, famous for his Zap Comics and "Keep on Truckin'," designed the slightly larger-than-baseball-size cards.  And like baseball cards, the reverse provided short biographies of the artists. 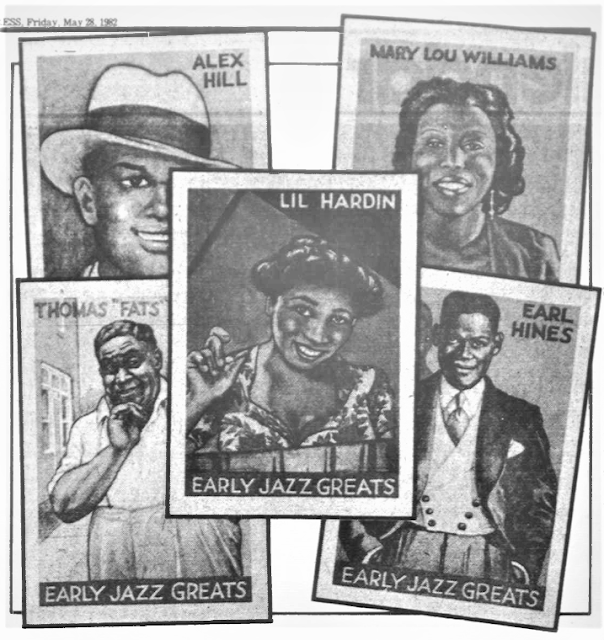 Buffalo Courier Express, May 28, 1982
Yazoo Record Co. remained here until about 1985.  It has been returned to a single-family home. 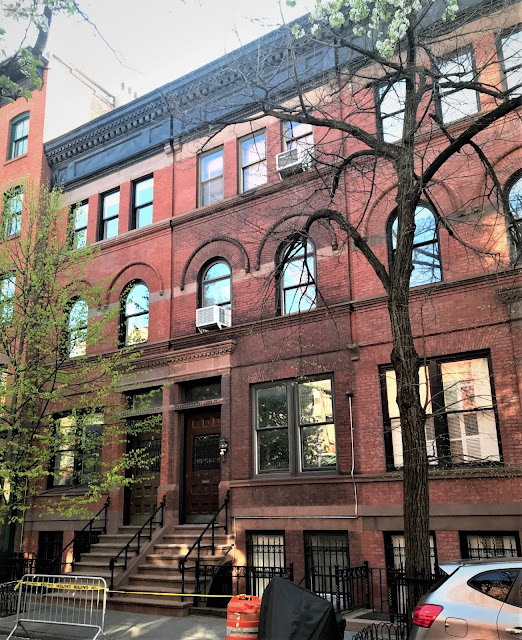 photographs by the author
LaptrinhX.com has no authorization to reuse the content of this blog
Posted by Tom Miller at 1:04 AM