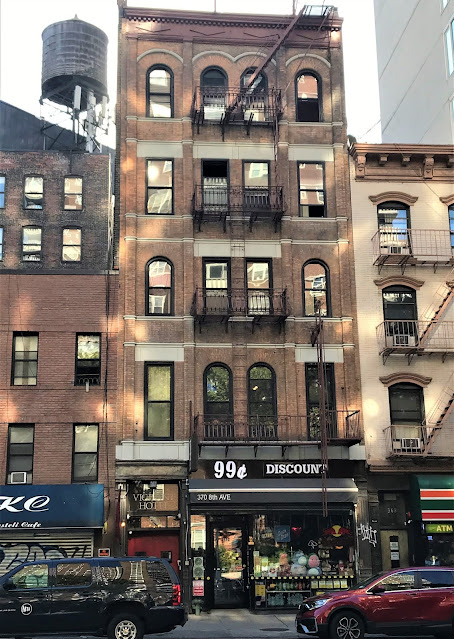 On a single day in July 1892, Dr. B. Grunhut purchased four properties from the Baker estate, including "No. 370 Eighth avenue with old buildings," according to The Sun on August 1.  Before long he sold those structures, most likely a house-and-store with a rear building, to J. Heller who demolished them and hired the Philadelphia architects Reeves & Son to design a replacement.
The plans, filed in March 1893, called for a five-story "brick and stone lodging house" to cost $16,000 (about $475,000 today).  Completed within the year, the firm's interpretation of the Romanesque Revival style was tasteful and elegant.  Noticeably missing were bulky, medieval carvings and chunky undressed stone blocks so often found in the style.  Reeves & Son faced the upper stories in beige brick trimmed in limestone.  Thin brick formed the subtle voussoirs above the arched openings and rounded bull-nosed brick softened the corners of the piers.  The bulbous wrought iron fire escapes doubled as attractive balconies.
But the handsome façade of the Vigilant Lodging House could not disguise what was inside.  Lodging houses were the lowest form of accommodations.  Unlike rooming houses (which were a step below a boarding house), lodging houses offered no amenities.  Instead, for a much cheaper fee the lodgers received an over-night bed with (hopefully) fresh sheets.  Patrons of lodging houses were commonly low-class petty thieves or down-at-the-heels alcoholics.
At street level was a commercial space.  It was leased in 1894 to the Restaurant F. Company.  Despite the misleading name that he used on the lease, Charles Davis opened a pool room.
At 2:00 a.m. on July 7, 1895 three policemen were passing by when they heard a noise from inside.  Officer Brown entered the hallway and attempted to get in through the side door, when "he was grabbed around the waist by William J. McNanery, a white man, who was the watcher," according to The Sun.  Brown called for his fellow officers, Dale and Maxon, who forced in the door.
The pool room broke into mayhem.  A curtain had been drawn around the pool tables to hide them from prying eyes.  A dozen men were playing craps on the tables and there were about fourteen others, most of them Black according to the article, milling around.
"When Dale and Maxon got into the pool room and the men in the place saw them, there was a wild scramble to get out."  About half of them jumped through the rear windows, but found themselves trapped by a high fence.  Charles Davis was held on $500 bail for trial, while the other men were fined $3 each--about $95 today.
Michael Flanagan was employed at the Vigilant Lodging House to keep order--not always the easiest job.  His aggressive methods resulted in his being arrested and charged with felonious assault on February 11, 1895.  Andrew Barton had checked in the night before.  According to his complaint, "while he was at the lodging house Friday night some of the men in the sitting-room tried to get him to give them money to buy beer."
When Barton refused, a loud argument ensued.  Hearing the ruckus, Flanagan entered with a club, knocked Barton down and kicked and hit him.
By 1899 the former pool room was a saloon, run by John and Patrick E. Brophy.  At around 2:30 on the morning of February 4, two detectives in disguise entered. The Sunday Telegraph reported, "They were shocked by the sights they saw.  At several tables were women seated in various stages of undress, smoking cigarettes, and there were others sprawling about the floor in drunken stupor."
Patrick E. Brophy, said the article, took the detectives "for a promising pair of Reubens," or dupes.  He told his waiter, Eugene Lindsay to take care of the customers.  Because it was past midnight and technically Sunday, serving alcohol would be a violation of the excise law.
The detectives ordered whiskey and when Lindsay brought it to them, the detectives' "false beards and whiskers were cast aside and Lindsay was arrested, after which they drove all the women out of the place."
Patrick E. Brophy appeared in court the following day in support of his bartender.  But Lindsay, despite the evidence against him, held his hand on the Bible "and said it was all a lie, that he had not given them a drop to drink."  The magistrate was furious.  "And now I'll make an example of you and teach you the value of an oath," he said.  He ordered the clerk to draw up a complaint of perjury.
Brophy asked how much the bail would be and was told $3,000--nearly $97,000 in today's money.  "When the unusually high figure was named, he shot out of that courtroom at a 2.40 gait and left his unpenitent [sic] waiter to his fate," said the article. 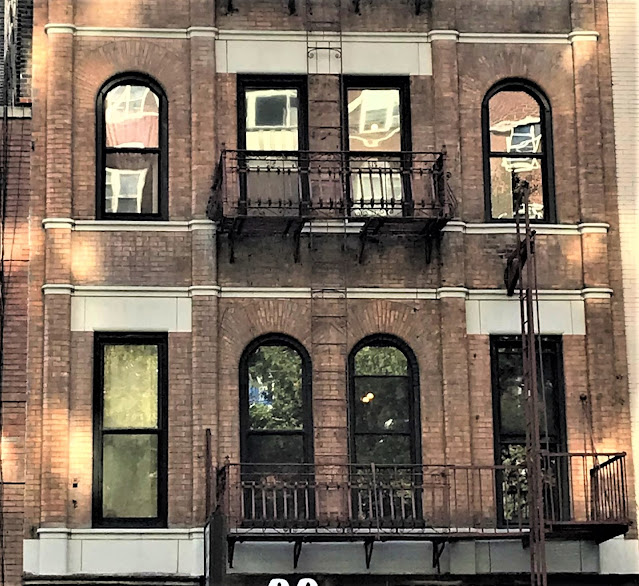 Only close inspection reveals Reeves & Son's delicate brickwork.
The police were back a month later.  On March 17, 1899 The Morning Telegraph reported, "Thirty-seven of 'the girls,' as they are termed in the elite vocabulary of that district" explained just how they happened to be arrested at the Vigilant Hotel--purportedly a male-only lodging house.  Also in the courtroom was Acting Police Captain Devery who "explained to the Magistrate just the sort of a place the Vigilant was," said the article.  "He said it was owned by John Brophy, and that when he and his Chief entered there was a wild scramble among the revelers.  Men and women knocked each other over in their frantic efforts to escape."
Each of the women gave the judge a reason why she was out so late.  One, "with crudely painted cheeks," explained "I'm a journeyman dressmaker and my business keeps me out late at times."  Another said, "I am a trained nurse and I was out attending my patients."  One gave her name as Sophie Van Rensselaer and said she had just come in from the country and, "feeling week, she stopped into the place to get something to strengthen her."
The Magistrate Simms asked her, "How do you spell your name?"
"Well, really, I have never thought of that.  Such a small matter, you know."
Simms eventually discharged all the women, but held the proprietor in $500 bail for trial.  According to The Morning Telegraph, as the females left the courtroom one of them remarked, "I think he's just too lovely to be a judge."
The names of the tenants in the Vigilant Lodging House appeared in newspapers for the wrong reasons.  In the winter of 1905 John Taylor appeared in the West Side Court, charged with attempted armed robbery.  On the night of February 27, Lillie Smith, who lived at 235 West 34th Street, had stepped off a Broadway street car and headed home.  She realized two men--John Taylor and Armand P. Berger--were following her.  She ran to her home, but before she could open the door they overtook her.  While Taylor barred the door, Berger pulled a gun and demanded the woman's cash.
Instead, Lillie screamed.  The thugs turned to flee, but "ran into the arms of Detective Grant," as reported by The Sun.  "He pulled his gun and kept them at bay until Miss Smith arrived with another cop and identified them."  Lillie had had a narrow escape.  A bottle of chloral hydrate, used to knock out his victims, was found in Berger's possession.
Tenant Charles Curtis was described by The Star as "a well-known second story man."  The term referred to burglars who climbed through second-story windows.  Because of his reputation, police wanted to question him regarding a series of recent burglaries in 1908.  On the afternoon of February 14, Detective Sergeant Patrick J. Ryan spotted Curtis on Broad Street and approached him.
The Star wrote, "Conscience stricken, the hardened burglar had no sooner been tapped on the shoulder by Ryan, than he turned white and hoarsely cried out, to the astonishment of passersby: 'Al right, Ryan.  You have got me with the goods on me.'"
The detective was as shocked as anyone else.  Curtis was searched on the spot by Ryan and two other detectives.  The Star said, "Excited women passing by saw the sleuths extract two ugly looking revolvers and a jimmy from the burglar's overcoat pockets."  At the station house he confessed to multiple burglaries.  In his pockets were found part of his plunder, including diamond rings, gold mounted eye glasses, and a "silver net purse."
Another burglar living here was Albert Anderson.  The 28-year-old appeared in court on November 29, 1914.  He had already been convicted of first-degree burglary three times and third-degree burglary twice.  If he were convicted a fourth time he could be sent to Sing Sing for life.  In order to avoid that possibility, he pleaded guilty to third-degree burglary and was sentenced to ten years.
The enactment of Prohibition outlawed the sale of alcohol.  An unintended side effect was the increase of drug use.  On September 9, 1922 The Evening Telegram reported, "George Kline, fifty-eight years old, who said he lived at No. 370 Eighth avenue, was arrested at Forty-fourth street and Broadway charged with selling a packing of heroin to Charles Martin...who said he was a vaudeville actor."  Each was held in $1,000 bail, nearly $15,500 today.
The Depression years saw the Rio Grande Club in the ground floor space.  It might have seemed that the meager accommodations in Vigilant were as low as possible.  But then  a renovation completed in until 1950 resulted in 28 to 30 "cubicles" on each floor.  The no-ceiling spaces allowed noises and smells to waft from one cell to another.
By 1971 the Britania Cafe operated in the first floor space.  On October 12, 1971 an advertisement touted a "2 in 1 Spectacular! The Sam 'Houston' Hawkins Show" and the "Exotic Dancers of the Middle East."  The following year, on September 11, 1972, New York Magazine wrote, "Eighth Avenue is not exactly Greece (or even Turkey, for that matter), but after a few glasses of retsina, it might as well be."  The Britania, said the article, was one of the "best spots for watching belly dancing." 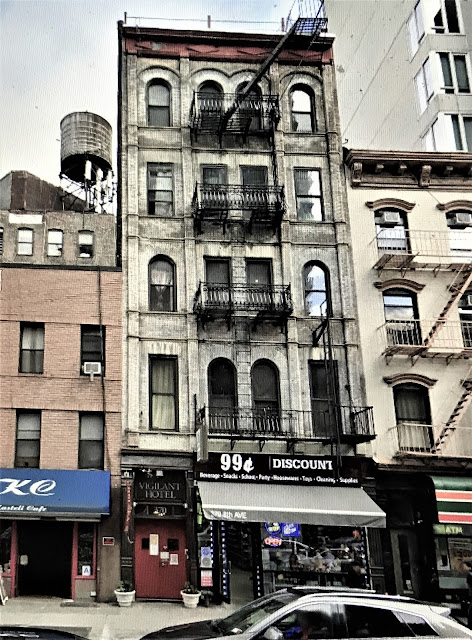 Until recently the building was covered in gray paint.
In 2012 journalist Gus Lubin went undercover and spent $40 for a night's stay.  Writing in Insider on March 12, he said the man behind the desk handed him a "big spray bottle with 'BUGS' written on the side in marker.  'Spray it if you see a bug.  You can spray it on yourself, your clothes, your bed."
Still called the Vigilant Hotel, the flaking coat of gray paint that had disguised Reeves & Son's brick façade has recently been removed.  A discount store occupies the ground floor space with its colorful history.  Operated by Interfaith Retreats, the upper floors are described as a hostel and "a space for spiritual retreat" in its website, which says "The pod-style rooms...come with a shared bathroom."
photograph by the author
LaptrinhX.com has no authorization to reuse the content of this blog
Posted by Tom Miller at 1:36 AM