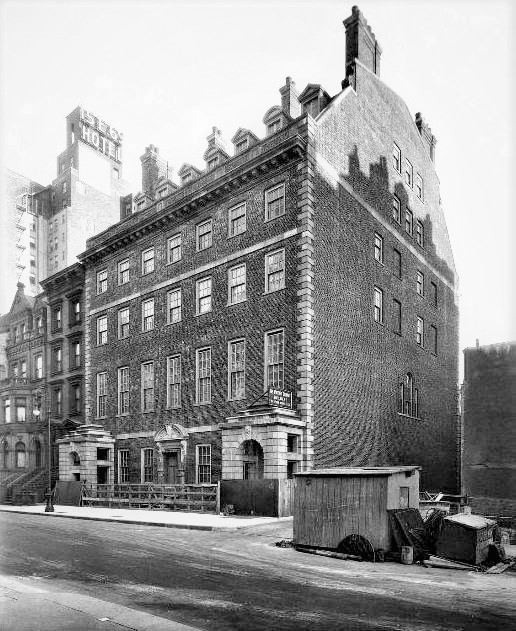 On May 24, 1921 The New York Times reported, "Four private houses in the Lenox Hill residential section have been purchased by a wealthy New Yorker, who is carefully preventing his name from becoming known."  The properties involved were 3 and 5 East 69th Street and the mansions to the rear at 4 and 6 East 70th Street.  According to real estate reports, said the article, "the new owner contemplates the demolition of the present houses on the site for the purpose of erecting a palatial home."
The identity of the buyer was confirmed four months later when The New York Times announced, "Mrs. Marshall Field has leased the large five-story American dwelling at 4 East 70th Street with furnishings to Alphonzo Gomez-Mena, banker of Havana Cuba."  The article noted, "The house is one of the four properties purchased recently by Mrs. Field as a site for her new residence, others being 6 East Seventieth Street, and 3 and 5 East Sixty-ninth Street, directly in the rear."
Mrs. Marshall Field was the former Evelyn Marshall, the wife of Marshall Field III.  Born in 1893, Field was the grandson of department store founder Marshall Field and heir to that vast fortune.  He had inherited $40 million while still in school and would inherit another $140 million when he turned 50 in 1943.  He and Evelyn had been married in 1915.  Evelyn, according to The New York Times in 1923, "is wealthy in her own right."  She was "a member of an old New York family," said the newspaper. 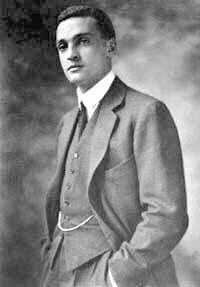 Marshall Field around 1919.  from the collection of the Illinois National Guard
Perhaps unexpectedly, Field had not followed in the family business, but after serving in World War I, turned to finance.  He and Evelyn had three children--Marshall IV, Barbara and Bettine.
The first hint of the much anticipated Field mansion came in March 1, 1922 when architect David Adler filed plans for "three-and-four-story dwellings" at 4-6 East 70th Street and 3-5 West 69th Street.  He placed the cost of construction at $225,000, or about $3.47 million today.
The New York Herald explained that there would be two separate houses, connected by a "two story structure in which where will be a court with a gallery on one side, with car room above."  The four-story 69th Street structure would house "a ball room, breakfast and dining rooms and guest rooms," said the article.  "The house on Seventieth street will be three stories high...It will contain a library, Mrs. Field's bed room, a nursery and a play room on the roof."  There was no mention of Marshall Field's bedroom.
As it turned out, the plans were greatly altered and only the 70th Street house, now five-and-a-half stories, was completed.  Adler's dignified neo-Georgian design was executed in red brick and trimmed in limestone.  Behind was a formal garden flanked by sheltering colonnades. 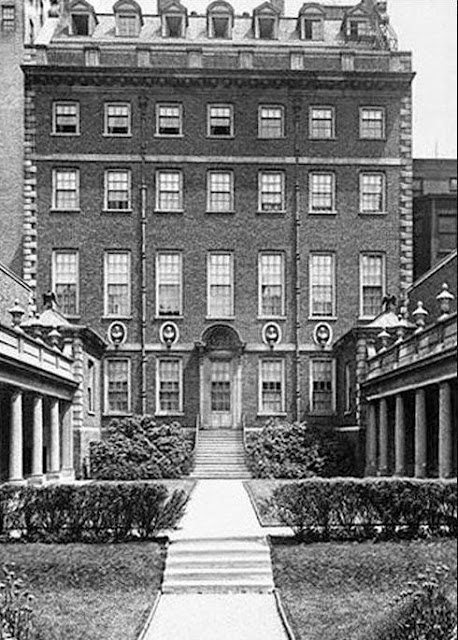 Carved busts sit within oval niches on the rear façade.  (original source unknown)
Evelyn Field was a shrewd operator when it came to finances.  In 1923 she took out a $2 million life insurance policy, the largest ever written for a woman in the United States.  On June 8 The New York Times explained, "The policy is said to have been taken out to take care of the inheritance tax, which in New York runs into huge amounts on large fortunes."
The article added, "Two years ago she negotiated a deal whereby she acquired a $2,000,000 estate at Lloyd's Neck, L.I., and recently completed one of the most luxurious country places in America, a main house containing approximately 200 rooms surrounded by some twenty-eight other buildings."  When Evelyn added to the property in July 1924, the New York Evening Post noted, "Mrs. Field's country estate is said to have the largest acreage of any private estate within commuting distance of New York City." 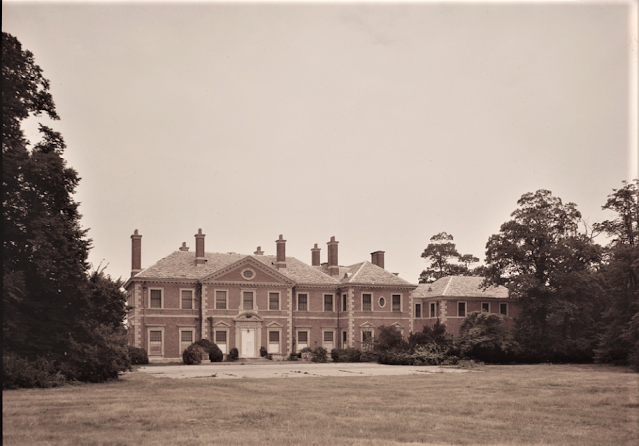 The Field country home.  from the collection of the Library of Congress.
Strangely enough, the Fields' new townhouse was rarely the scene of large entertaining.  But that may have had to do with worsening tensions between Marshall and Evelyn.  In February 1928 rumors flew of a "matrimonial rift," according to the Daily News.  The newspaper reported that the couple "issued a statement flatly denying the report." 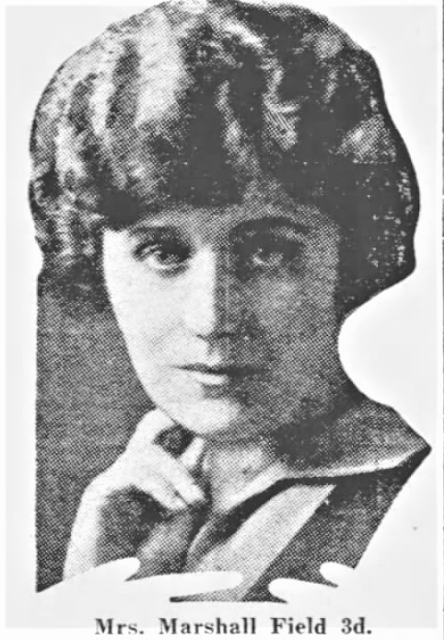 Daily News, March 18, 1930
But when Evelyn leased a house for $700 a month in Reno, Nevada early in 1930, that rift seemed confirmed.  On March 18, 1930 the Daily News wrote, "When reached through her secretary at her town home, 4 East 70th st., Mrs. Field made no denial that the divorce soon will be launched."  Other than that, the secretary said, "she has no comment to make."
When a Daily News reporter tried to track down Evelyn or Marshall at the Long Island estate, a servant said that Evelyn was out of town.  As for Mr. Field, "He does not make his home here any longer, you know.  Oh, yes, Mrs. Field does."
The following year, on August 5, 1930, The New York Times reported that Evelyn had obtained a divorce "with every precaution possible in the Reno courts to insure secrecy."  Her petition charged "that her husband left her more than a year ago and that they have lived separately since that time."  The article said she would receive $1 million annually "for the care of herself and the children."
Rumors that Marshall Field was "paying attentions" to Audrey James Coats, "the daughter of a popular London hostess," prompted a reporter from The New York Times to undiplomatically ask Evelyn if they were true.  The newspaper said, "Mrs. Field refused to comment upon the report, merely stating that she knew nothing of her husband's plans."
Those rumors were put to rest four weeks after the divorce when Marshall married Audrey Coats.  The new Mrs. Field was the  goddaughter of King Edward VII and the widow of a British Army captain.  (Their marriage would be short-lived, ending in divorce in 1934.)
The title to the East 70th Street mansion had always been in Evelyn's name, and she continued using it as her Manhattan residence, at least temporarily.  On May 1, 1932 The New York Times reported on a benefit luncheon she hosted in the residence for the Maternity Centre Association.
It would be, perhaps, the last entertainment Evelyn would give in the mansion.  She sold it shortly afterward to a group that intended to form an elite social club.  On October 22 the Daily News announced, "The very exclusive River Club is to have an imitator and a probable rival in the Intown Country Club which is to occupy the several million dollar mansion at 4 East 70th St., formerly the home of Mrs. Evelyn Marshall Field."
"When Mrs. Field sold her gorgeous home last Spring, it was intimated that such a club would occupy it," said the article.  "The formal garden, which continues through to 69th St., is to be used as the site of an athletic building for use of club members.  And the mansions' twenty-eight master bedrooms (and baths) will be available for members stranded in town with no place else to go."
Two months later, in its December 6, 1932 issue, Variety wrote, "Mrs. E. Marshall Field's town house at 4 East 70th street, New York, becomes a snooty club next spring...Among the plans for the club will be the conversion of the formal garden...into a Florida-temperature, all-year-round swimming pool.  It will be known as the Intown Country Club."  The house proper, said the article, "will be reconverted for spacious dining, lounge and play rooms."  Although the club was "chiefly Park avenue in its social promotion," Variety noted, "but Cole Porter, Freda Innescourt and Louise Trussing are among the theatrical personages interested."
As it turned out the Intown Country Club never got off the ground, the grandiose plans were not carried out, and the club never moved in.  Instead, on August 7, 1937 The New York Times reported, "Housewreckers began yesterday the task of razing the Marshall Field mansion at 4-8 East Seventieth Street, which several months ago was sold to a syndicate for two twelve-story apartment buildings."
The article lamented:

Many of the rooms are paneled with white pine and maple, in natural finish, which it is feared cannot be removed in such condition as to permit its use elsewhere.  In the library carved oak paneling was used, even in the ceiling, and the book stacks were of special design, only the uprights being permanently fixed.  The building was erected about eleven years ago at a cost of $400,000. 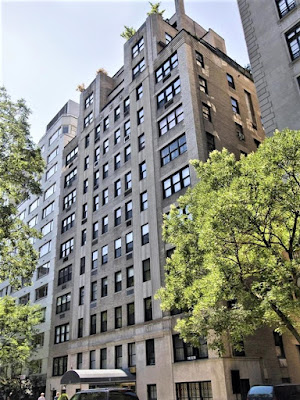 photo via cityrealty.com
LaptrinhX.com has no authorization to reuse the content of this blog
Posted by Tom Miller at 1:12 AM