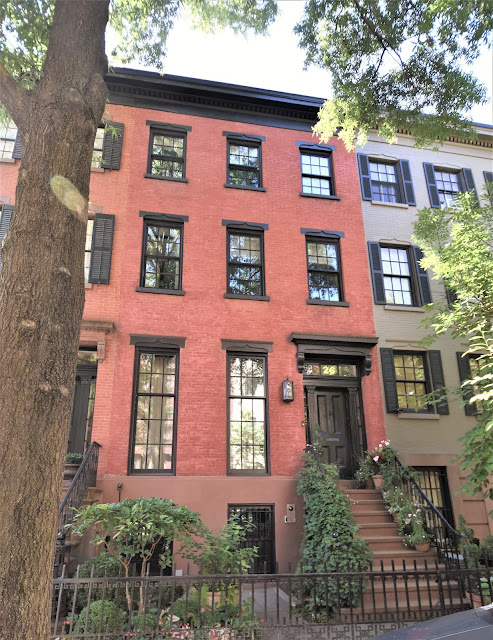 When yellow fever swept New York City in 1798, the Bank of New York purchased lots on a Greenwich Village road and built a branch there.  The lane took on the name Bank Street.
In 1843 developer Stephen B. Peet purchased ten 19-foot-wide lots on the south side of Bank Street, between Waverly Place and West Fourth Street, from the Bank of New York.  The following year he completed a splendid row of hybrid homes--a successful mix of Greek Revival and Gothic Revival elements.  Sitting on brownstone English basements, the three-story red brick residences had expected Greek Revival doorways, with Corinthian pilasters, narrow sidelights and ample transoms.  But rather than the heavy entablatures seen in other Greek Revival houses, the entrances were given unusual stone canopies and cornices, supported by scrolled brackets.  The lintels of all the openings were decorated with graceful ogival arches--a foreshadowing of the Gothic Revival that was just emerging in New York City.  The terminal cornices, with their rows of delicate dentils, were purely Greek Revival.
Since 1836 Louis Desire Peugnet and his brother, Hyacinthe, had operated the Freres Peugnet School on Bank Street.  In 1845 Louis erected a fine home at 11 Bank Street and that year opened a boarding school in the newly built 26 Bank Street.
An advertisement in the Morning Courier and New-York Enquirer read:

The Situation and extent of the play grounds give to the institution the advantages both of the city and country.

The $75 tuition would be equal to about $2,650 today.
In 1851 Dewitt Clinton Hays and his wife, the former Amanda Fitzallen, purchased 26 Bank Street.  Interestingly, his brothers Benjamin and Jacob, Jr. moved in as well.  Three of ten children, their well-known father, High Constable Jacob Hays, had been called "the terror of rascals of every grade."  By the end of his career, his reputation for handling law breakers was such that parents warned unruly children, "Old Hays will get you!"
Benjamin had worked closely in law enforcement with his father.  But in 1845 a full-time, salaried police department, the Municipal Police, was organized.  While Jacob honorarily kept his title, both his and Benjamin's jobs were eliminated.
Dewitt was a member of the brokerage firm of Wellstood, Hanks, Hays & Whiting.  Jacob, Jr. was also a broker and appears to have worked in the same office.  Dewitt Clinton Hays would go on to become president of the Bank of Manhattan (later Chase Manhattan), and treasurer of the New York Stock Exchange.
It may have been Dewitt's and Amanda's growing family (they would have eight children) that prompted Benjamin and Jacob to find their own homes.  By 1853 both had moved out.
The Hays family remained until 1859, when the house was purchased by Benjamin J. Hart and his wife, Harriette.  Benjamin and his brother, Solomon J., had operated a firearms and sporting goods firm, Benj. J. Hart & Bro. at 297 Broadway since around 1848. 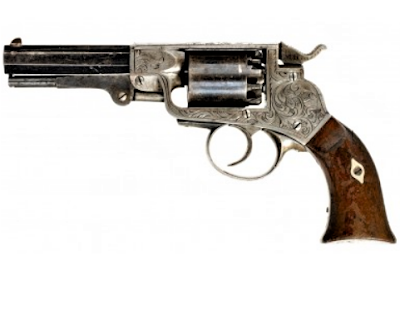 This 1857 Navy Percussion Revolver is marked "B. J. Hart / Broadway"  photo via college hillarsenal.com
The working relationship between the brothers came to an end on December 31, 1861 when an announcement in the New York Herald said the partnership "is this day dissolved by mutual consent."  Benjamin continued running the business, now alone.
Tensions within the extended family may have prompted the break-up.  In April 1866, a month after the death of his father, John I. Hart, Benjamin and Harriette sued what appears to be the rest of the Hart family, including Solomon and more than 40 others, including Benjamin's sisters and their husbands and children.  The contention was over real estate.
The Harts remained at 26 Bank Street for a decade.  In 1870 it was being operated as a high-end boarding house.  The residents that year were John H. Giffin, a "case" merchant; William F. Gilley, the deputy registrar in the Hall of Records; and Harold Howard, who operated a watch store on Broadway.
Boarding houses were quite often run by widows.  It was a respectable way for a single woman to make a living.  In the 1870's Eliza A. Wilson was the landlady; in the 1880's the house was operated by Almira Mills; and at the turn of the century Mary E. Connor, the widow of Frank Connor, was in charge.
Around 1901 a "Miss Wilson" took over.  She took in a young boarder that year, Mary Lowell.  Described by The Evening World as "a beautiful young woman," Mary was among the new class of females--a career woman.  She was trained as a "stenographer and typewriter."  (The term "typewriter" at the time referred not only to the machine, but to its operator.)  She was about 19 years old.
Like many working girls, Mary had come to New York to find employment and, most likely, a husband.  She knew no one in the city and her landlady became her only friend.  Although she did not find a job in an office, she found work in a Greenwich Street restaurant and kept that job for years. 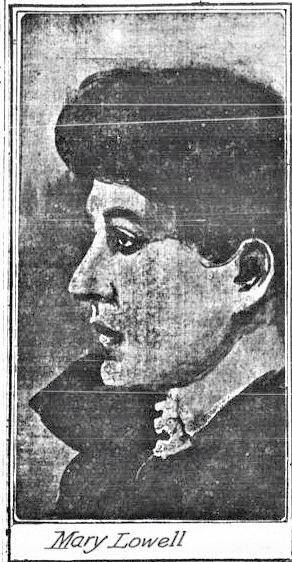 The Evening World, June 7, 1904 (copyright expired)
Three years after she moved in, Mary and Miss Wilson had a terrific argument during the first week of June 1904.  The spat would end tragically.  It was so serious that Mary moved to another boarding house on Waverly Place on June 5.
Two days later The Evening World reported, "Lying dead in the rear of the old-fashioned residence at No. 147 Waverly place to-day, was found the body of Mary Lowell...There is some mystery about her death, though it is generally believed that she committed suicide some time during the early morning hours by springing from the window of her room on the third floor of the house."
In her room was her trunk which had been brought from 26 Bank Street.  Mary had not opened it.  An acquaintance, Mamie Veto, gave her opinion.  "The girl had no blood relatives living here...For three years past she had lived with a Miss Wilson, at 26 Bank street.  She was practically the only friend...and they quarreled last week."  Mamie concluded, "I am convinced that her feeling of loneliness brought on the fit of despondency that urged her to commit suicide." 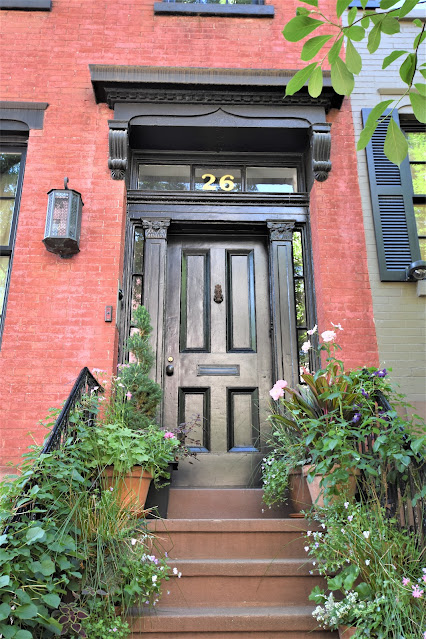 The house continued to take in boarders through the Depression years.  Then, in 1942, a renovation resulted in one apartment per floor.  A subsequent remodeling joined the basement and parlor levels as a duplex apartment.
In 1992 the house was sold for $1.25 million, and in 2009 interior designer James D. Huniford sold it for $7.25 million (about $1 million below the asking price.)  It was returned to a single-family home in 2016.
photographs by the author
LaptrinhX.com has no authorization to reuse the content of this blog
Posted by Tom Miller at 1:04 AM