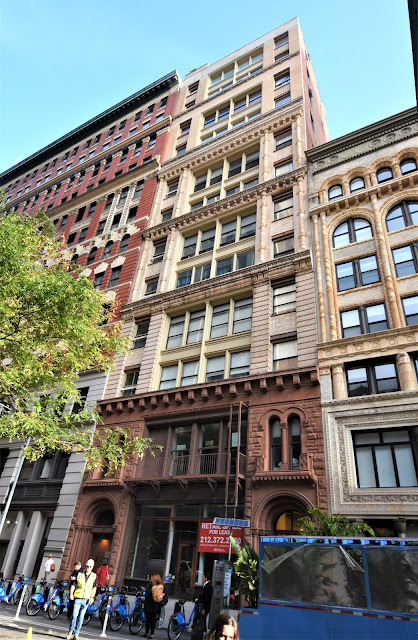 Steps from Fifth Avenue and a block west of Union Square, the houses at 5 and 7 East 16th Street sat within the city's mansion district in the Civil War years.  But by the mid-1880's businesses were overtaking the grand homes as their owners moved ever northward.  In February 1886 Mary A. Lyddy hired architect W. Jones to renovate 5 and 7 East 16th Street into "studios and offices," according to the plans.  Two-story iron storefronts replaced the high stoops.
Apparently not content with the results, only five years later Lyddy demolished both buildings and hired Alfred Zucker to design an eight-story loft building at a cost of $120,000--around $3.5 million in today's money.  The prolific architect would be responsible for dozens of loft, hotel and office buildings in New York.
His design incorporated a two-story Romanesque Revival base faced in undressed brownstone.   The large entrances that flanked the storefront reflected the English Norman style with compound arches and clustered colonnettes.  On either side of the central opening of the second story were paired arched windows fronted by charming balconettes.  The upper six floors completely changed personality.  Here Zucker turned to a more manicured Renaissance Revival design, and clad the façade in beige brick trimmed in matching terra cotta. 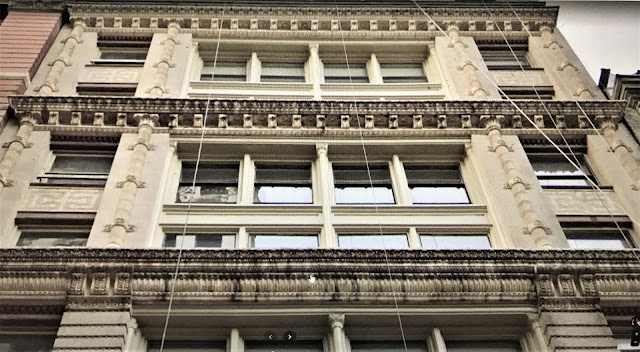 Lyddy gave her project a name, one that would not catch on.  On November 14, 1891 the Real Estate Record & Guide wrote, "The 'Geraldine,' the eight-story building which is being erected on 16th street, east of 5th avenue, for Mary A. Lyddy...is now up to the roof.  The Guastavino arches are noticeable in the present unplastered condition of the building."  The district had become popular with publishing firms and the strength-giving arch system would be necessary to accommodate heavy printing presses.  The article additionally noted, "The terra cotta work in the front of the building is very credible."
The structure was completed in January 1892 and quickly filled with printers and publishers.  Among the first was the weekly magazine The Illustrated American, which advertised itself as "The handsomest news magazine in the world.  Brilliant and beautiful, clean, instructive, and entertaining."
Two other initial tenants were the Stanley-Bradley Company, and the United States Book Company, which also ran its bookstore in the building.  Among the latter's releases in 1892 were Arthur Conan Doyle's The White Company, and three new books by J. M. Barrie including his highly successful The Little Minister.

Scribner's Magazine, December 1892 (copyright expired)
By the latter part of the decade The New York Times Educational Line, which offered an encyclopedia on an installment plan; The Baker & Taylor Co., publishers of school and college textbooks; and Frederick A. Stokes Company leased space in the building..
Frederick A. Stokes published a wide range of books.  In 1899, for instance, it offered several new books for boys, including Stephen Crane's Active Service, Tom Hall's The Fun and Fighting of the Rough Riders, and Jack, the Young Ranchman; or a Boy's Adventures in the Rockies.  For women and girls it offered Maud Humphrey's The Golf Girl; Robert Barr's Jennie Baxter, Journalist; and Cupid and the Footlights by James L. Ford.  There were classics, as well, like Oliver Goldsmith's The Vicar of Wakefield and Thackeray's History of Henry Esmond. 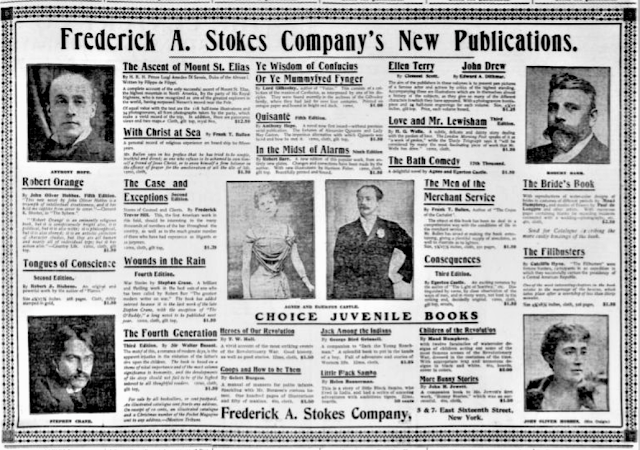 The New-York Daily Tribune, December 15, 1900 (copyright expired)
The tenant list began to change around 1904.  While Frederick A. Stokes Company, the Globe School Book Co., and Neumann Bros. bookbinding were still in the building, garment manufacturers were taking space.  In 1904, two new tenants were the embroidery firm of Leon Jobin and Oppenheim & Neuglass, makers of "women's fashionable high grade tailor made suits."
An advertisement appeared in the Record & Guide on October 15, 1904 that read, "To Settle an Estate the following property will be sold cheap for cash:  Nos. 5 and 7 East 16th St."  The asking price was $210,000--or about $6.3 million today.  It was purchased by Carrie M. Butler.
Five years later she hired the architectural firm of Israels & Harder to enlarge the building by removing the parapet and adding four floors.  Although they copied Alfred Zucker's overall design, none of the ornamentation of the lower floors was continued, making the addition noticeable.  At the same time the top floors were joined internally with 85 Fifth Avenue.
All of the tenants were now involved in the garment industry.  In 1912 they included Hut Neckwear Co.; Louis Kramer's silk neckwear factory; and Picadilly Waist Co.  The waist, or shirtwaist, was the most popular item of women's apparel at the time and Picadilly Waist Co. employed 60 women in its factory.  It had one man on its payroll, presumably the foreman. 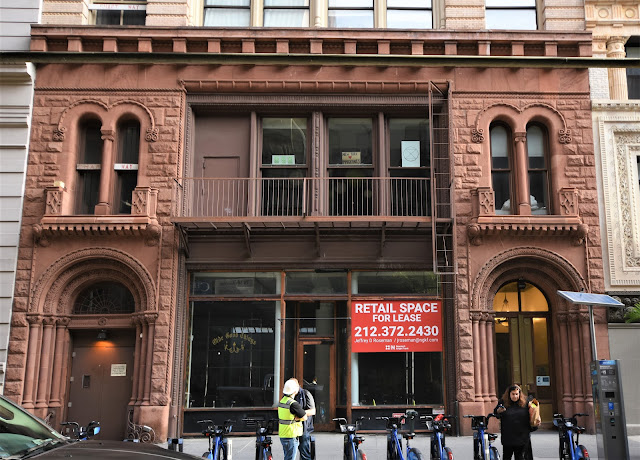 In 1919 Golinko & Marks, makers of children's clothing, occupied the fourth floor.  On the morning of November 12 the foreman, Samuel Block, opened the shop to find "the entire floor in confusion," as worded by The Evening World.  The company's safe had been blown open and the explosion "scattered valuable ginghams and linens, scorched and torn."  The safe was empty.
Block telephoned police.  They soon discovered that the burglars had gone throughout the building.  On the fifth floor they had pried open the safe of T. Buchwald, makers of waists.  They removed a strong box and blasted it open.  John W. Burt, manufacturer of umbrellas and parasols on the sixth floor, had also fallen victim.  The "safe had been dynamited and many rolls of valuable silks had ben taken from smashed cabinets."
The bold robbers used bolts of cloth, brought upstairs from Golinko & Marks to deaden the sound of the explosions.  They left the singed remains on the floor of the hosiery firm Wallach & Mayer, Inc., on the seventh floor.  There they had blown open two safes.  Police theorized that one of the thieves hid in the building until after hours, then let his confederates into the building.  Although a precise accounting could not be taken while the police were still investigating, the initial estimate of the total loss was half a million in today's dollars.
The 1920's continued to see apparel firms occupy the building.  Among them were the Reliable Manufacturing House, Schockett Leather Goods, and the Royal Costume House.  One  tenant, however, was, perhaps, unexpected.  On July 3, 1922 The New York Times reported that Edward F. Cassidy, "a former alderman and the Socialist nominee for Mayor last year, was named as the party candidate for Governor by the Socialist State convention at 5 East Sixteenth Street yesterday."
The third quarter of the 20th century saw change come to the neighborhood.  In 1979 the Union Square Theater occupied space in the building, as the high-ceilinged lofts of the upper floors lured photography studios.  Among them was Frank Cowan, who shot ads for corporate clients like Levi's, Pampers and Volkswagen.  He took the top floor in 1970 when a handbag manufacturer moved out, paying $550 per month rent.
Unfortunately for tenants like Cowan, landlords took full advantage of the increasingly trendy tenor of the neighborhood.  In 1981 when his lease expired, Leon Sutton raised his rent to $2,000 per month.
By now the internal connections with 85 Fifth Avenue had been closed off.  In 1987 the Manhattan Cooking Center, a culinary school that offered tastings and lectures, occupied space.  And for years starting around 1994 Ann Sack's Tile and Stone showroom was in the ground floor space. 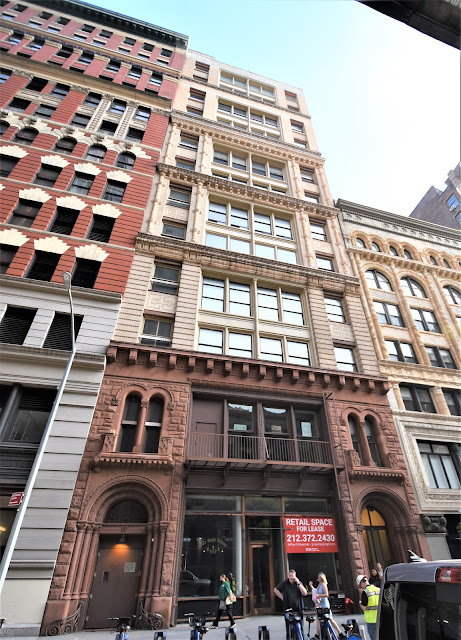 A renovation in 2008 resulted in apartments on the fourth, fifth, and seventh through twelfth floors--one per floor.
photographs by the author
LaptrinhX.com has no authorization to reuse the content of this blog
Posted by Tom Miller at 1:10 AM