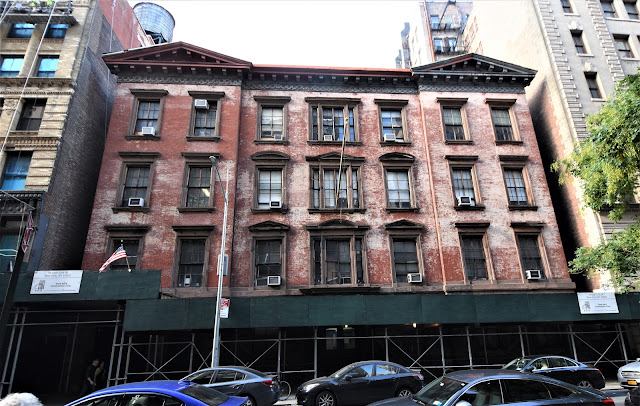 New York City's Fifteenth Ward encompassed some of the wealthiest neighborhoods in Manhattan, including the Bond Street district, Washington Square, and Fifth Avenue as far north as 14th Street.  In 1854 the city purchased property on East 12th Street, between University Place and Broadway for $22,500.  Early the following year well-known architect Thomas R. Jackson filed plans for a new school building, Ward School No. 47, at a cost of $29,500.  The total outlay, including land, cost the city the equivalent of $1.6 million in today's money.
Jackson designed the four-story structure in the Ango-Italianate style.  A rusticated brownstone base supported three floors of red brick.  The windows of the slightly-projecting end pavilions sat within architrave surrounds upon bracketed sills.  The openings of the central section were topped with Renaissance-inspired pediments, the middle windows arranged in three sections. 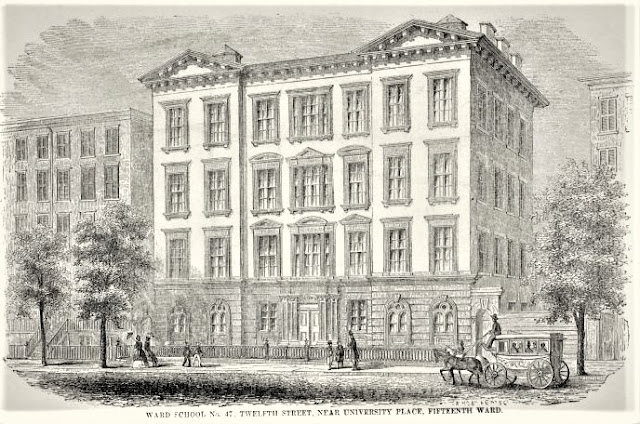 from the collection of the New York Public Library
From its first day Ward School No. 47 would be different.  Education beyond basic arithmetic and grammar was traditionally considered unnecessary for girls.  Now, Lydia Fowler Wadleigh came on the scene.
Decades later, in 1907, The Granite Monthly recalled:

At this time how meagre was the education granted to girls!  Miss Wadleigh's one aim was to save the girls from mental starvation.  She was severely criticized because of her pleas for the advancement of young women.  The few who did believe in her theories were too timid to acknowledge it.

Born in New Hampshire in 1817, Wadleigh had been privileged to receive an elevated education.  She graduated from the New Hampton Literary and Scientific Institution in 1841 and had remained there to teach Latin and Greek for four years.  She was hired as a faculty member of Ward School No. 47, in charge of organizing an experimental "senior department" (or high school) on the top floor for girls. 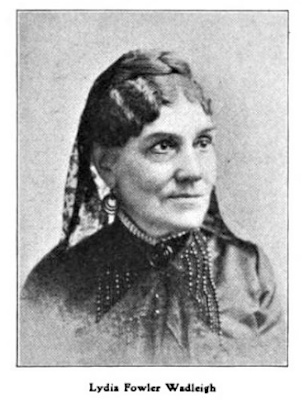 The Granite Monthly, June 1907 (copyright expired)
Wadleigh faced an uphill battle.  Conservative citizens predicted failure and some, according to The Granite Monthly, felt "Customs long established should not thus be interfered with and changed.  Girls do not require a higher education."  Determined, Lydia Wadleigh forged on.
The senior department for girls opened on February 6, 1856.  And it appeared that Wadleigh's detractors were right.  Years later Sarah E. Cowles, a former principal, recalled that morning.  "How many pupils do we find here?  Not one!  That noble and brave-hearted woman, Miss Wadleigh, who had been chosen to preside over the higher department waits patiently for her pupils."  They did not come.
But then, the following day two dozen girls showed up.  Sarah Cowles told a reporter from the New-York Tribune in April 1895, "This was the small beginning of the senior department that made 'Old Twelfth-st.' so famous in bygone days.  It never lacked pupils from that time."
Lydia Wadleigh had students, now, but she still faced obstacles.  Sarah Cowles said, "There were some who were strongly opposed to this higher department, and it was nearly two months before suitable textbooks could be obtained."  Undeterred, the teacher used her own money to purchase additional textbooks and supplies.  "She told no one of these excursions and their object, but almost daily her school was enriched by something bought and given freely and lovingly to her school," said The Granite Monthly.
Lydia Wadleigh's top-floor senior department was technically called the 12th Street Advanced School for Girls.  The lower floors of Ward School No. 47 contained the primary and grammar schools, also for girls only.
As New York citizens threw their support behind the Union soldiers during the Civil War, the students here did their part.  Two-thirds of the troops who died during the conflict were victims of disease--pneumonia, typhoid, diarrhea/dysentery, and malaria--rather than battle injuries.  In 1862 the girls held a fair in a room at the Cooper Institute, charging 40 cents admission.  They raised $965, more than $25,500 today, to purchase supplies to send to sick soldiers.
On May 28, 1862 The New York Times printed a letter from Caroline C. Hall, a volunteer nurse, which said in part:

We have great pleasure in acknowledging the receipt of a 'cart-load' of clothing, food, wines, and delicacies of numerous kinds adapted to the use of the sick and convalescent, contributed by the pupils of the Junior Department of Ward School No. 47...The eyes and hearts of many have been brightened by the beautiful and odorous bouquets laid upon their beds, and lips which have tasted the flavors of the delicacies presented to them have blessed the hearts of those who have considered them in their adversity and suffering, and helped to cheer them in their path of duty.

A student at the time recalled decades later how the girls worked hours at a time rolling muslin bandages for the soldiers.  And they fashioned a Union flag from red, white and blue flannel.  Mrs. J. L. Chapin told The New York Times in July 1898, "Miss Wadleigh was a patriotic woman, and we had the first flag that was raised over a schoolhouse in New York...It was a large one, 30 feet long, and we had a flag raising when it was ready."
The concept of a high school for girls drew international attention.  In the fall of 1865 English engineer and railway developer Sir Morton Peto visited New York with a group of colleagues.  On October 14 The New York Times reported, "they went to the public school in Twelfth-street, between Broadway and University-place--a school which stands foremost among its peers, and is justly considered one of the 'institutions' of the city."
The students sang and recited for the visitors, who then addressed them.  Parisian banker Leon Lillo said in part, "I congratulate you that you live in a country where such things are not only possible but normal.  In my own country, France, we are not yet so privileged; there are still bonds and barriers between the fullest education of our youth, which, however, we trust in time may be removed."
They were just some of the distinguished visitors over the years.  The Granite Monthly recalled, "John Bright of England was one of the early visitors; in 1866 members of the Russian legation visited Miss Wadleigh's school; later came prominent educators from European countries and from Calcutta, India."
In 1870 Lydia Wadleigh was appointed "Lady Superintendent" of the new Daily Female Normal School on Broadway at 4th Street.  (It became the New York Normal College the following year, and today is Hunter College.)  The New-York Tribune wrote, "The 300 pupils of the senior department of No. 47 went with their principal to the college, and the vacated rooms were at once filled with girls from the overcrowded junior department."
The sterling reputation of Ward School No. 47 continued.  On June 17, 1874 the New York Herald praised it saying, "Since its foundation in 1855 it has occupied the most prominent position as a model institution, and our Board of Education can point to it with pride and pleasure."
In 1895 the concept of a girls' high school in the building was renewed.  On April 16 the New-York Tribune reported, "Not content with being one of the best organized schools in the city, Grammar School No. 47 aspires to become a high school for girls."  The article mentioned in passing, "The school is unusually well lighted and ventilated for an old-fashioned building."
The Board of Education opened the Girls' High School in the building in 1897.  On June 17 The New York Times reported, "Grammar School 47, in Twelfth Street, near University Place, is to suffer obliteration as a grammar school.  The young girls who yesterday morning bore away its diplomas in triumph were the last of their kind...A high school will be opened next all in the famous old building."  The Sun noted, "A petition was received from the alumnae of the class of '67 of the girls' high school of that time, asking that the new girls' high school be named for Lydia F. Wadleigh.  It was referred to a committee."
That would not happen until 1901 when it was renamed Wadleigh High School.  The self-confidence and independence of the girls was evidenced later that year.  On December 28, 1901 The New-York Daily Tribune reported on their production of Tennyson's Princess for "the Christmas entertainment."  The article noted the play was "prepared and arranged without aid of any kind from teachers."
In 1902 the Wadleigh High School was moved to West 115th Street and the East Twelfth Street building was converted to the Girls' Technical High School.  Here girls received two-year training in professions that would earn them a living.
In May 1903 The Argus noted, "That the girls themselves are eager for such training is evident from the success of the Technical High School for Girls, which was opened this month by the board of education of Greater New York."  The article said that within a week of its opening, the school "which was intended for the accommodation of 500 pupils, was crowded with twice that number, and it was necessary to open an up-town annex."
It was not only a trade that the girls learned here.  On January 12, 1904 the New-York Tribune reported, "Instead of marching out of the assembly hall directly after the morning exercises and buckling down to school work, two hundred of the pupils at the Girls' Technical High School...kept their seats yesterday morning to listen to a talk on posture, carriage, breathing and dignified deportment." 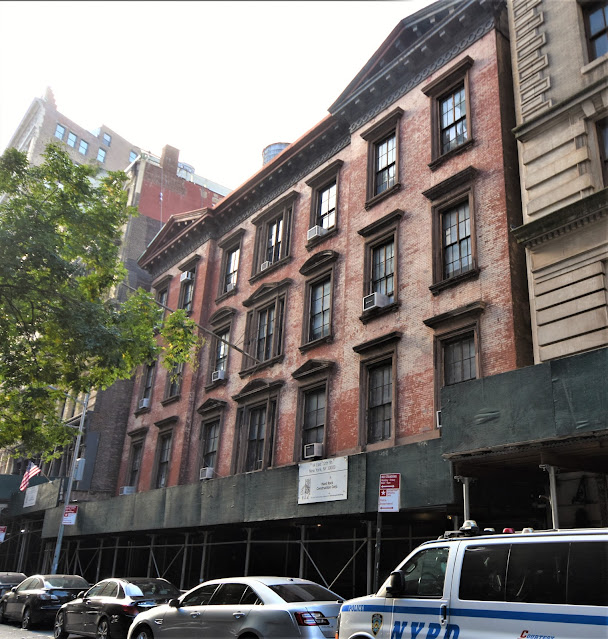 In 1916 the building once again became an academic high school, the Washington Irving High School.  It occupied the venerable building until 1913 when it moved to Irving Place.  For the next four decades the building housed the Board of Education's Building Bureau.  Then, in 1958 the city turned it over to the New York City Police Department as the headquarters of its Juvenile Aid Bureau and the Police Athletic League.
Founded in 1914 as the Junior Police Corps, the Police Athletic League offered youngsters an alternative to the streets, providing equipment and a safe place to play.  By now, however, it did much more than that.  On May 23, 1959 The New Age reported, "More than 20,000 persons are busy trying to make the summer months less restless for youngsters in the Police Athletic League.  Forty-five playstreets and playgrounds will be opened to more than 150,000 boys and girls as part of PAL's summer program." 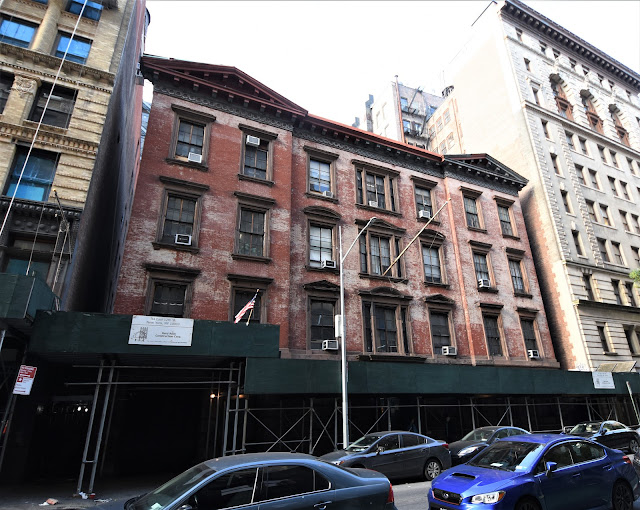 More than six decades later, the Police Athletic League is still headquartered in the building where the first step in educational equality for women was taken in New York City.
photographs by the author
LaptrinhX.com has no authorization to reuse the content of this blog
Posted by Tom Miller at 1:14 AM