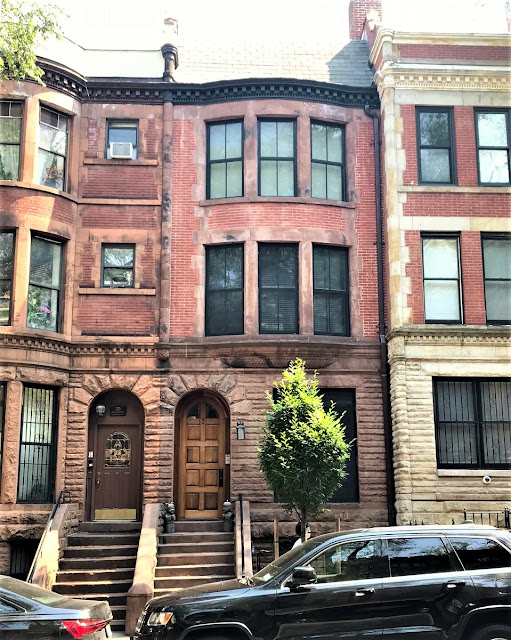 In the summer of 1886 developer Charles A. Bouton began construction on six rowhouses on West 95th Street, between Columbus and Amsterdam Avenues.  Almost assuredly he was working together with another real estate development firm, William J. Merritt & Co., which was simultaneously erecting a row directly across the street.  Although Bouton and Merritt were normally considered competitors, Bouton's architect of record for his row was W. J. Merritt & Co.

Completed in the fall of 1887, Bouton's houses were 16- and 17-feet-wide.  Three stories tall with shallow attics and English basements, they were designed in a mirror-image A-B-C-C-B-A pattern.  The B models, which included 131 West 95th Street, were a mixture of Romanesque Revival and Renaissance Revival.  Above the rough cut brownstone basement and parlor levels, the red brick bowed façade was trimmed in dressed brownstone.  A shingled mansard sat above the dentiled cornice.
Marion J. Verdery and his wife, the former Mary Letitia Deems, purchased the house in June 1889 for $16,500--about $473,000 in today's money.  As was common, the title was placed in Mary's name.
Both Marion and his wife (who went by Minnie) were Southerners.  Minnie was the daughter of Rev. Edward M. Deems and Anna Disosway Deems.  The New York Times later explained, that Verdery, "succeeded in winning the heart" of Minnie, "and soon after Dr. Deems came to this city to live Mr. Verdery followed to claim his bride."  They were married in the Church of the Strangers, of which Deems was pastor, in 1872.
Verdery was a stock and bond broker with Latham, Alexander & Co.  He was, as well, the New York correspondent for several Southern newspapers.  The couple had a daughter, Katherine, and a one-year-old son, Marion, Jr.
The Verderys were widely known within society.  A month before moving into the 95th Street house, for instance, they attended the Presidential Ball at the Metropolitan Opera House.  The guests of honor were President Benjamin Harrison and the First Lady, and former President and First Lady Grover and Frances Cleveland.
Minnie's parents lived in the New York Hotel on Broadway.  In 1892 the 73-year-old clergyman was forced to retire because of failing health.  He and Anna were sitting in their rooms on December 28, when he suffered another stroke.  He lost all ability to speak and was paralyzed on his right side.  Rev. Edward M. Deems and Dr. Francis M. Deems, Minnie's brothers, explained in their father's biography in 1897:

After a hurried consultation it was decided to move the patient immediately to No. 131 West Ninety-fifth Street, where resided Mr. Marion J. Verdery, Dr. Deem's son-in-law.  It was a long drive from Waverly Place (Seventh Street) and Broadway to West Ninety-fifth Street, but the most smoothly paved streets and avenues were followed, and he stood the trip wonderfully well.

It may have been Deem's condition and the small staff of nurses and attendants necessary to look after him that prompted the Verderys to look for a larger home.  On February 17, 1893 the family moved "into a commodious home at No. 517 West End Avenue," according to the Deems brothers.  The esteemed clergyman died in the Verdery home on November 19 that year.
The Verderys had sold 131 West 95th Street to Asa Alling Alling and his wife, the former Louise Floyd-Smith, "for about $18,000," according to the Real Estate Record & Guide on January 28.  The price would amount to about $528,000 today.  Alling, a partner in Kennerson, Crain & Alling, was described by The New York Times as "a leading lawyer of New York."
Born in New York in 1862, the 1898 Representative Men of New York said Alling "comes from thorough American stock, his ancestors having been pioneers and founders of one of the oldest families in this country."  Among his first American ancestors was Roger Alling (Allen) who was Treasurer of the Colony of New Haven in 1637.  Louise, whom he married in June 1894, also came from an old American family.  A member of the Daughters of the American Revolution, Prominent Families of New York described her as being "of distinguished Colonial and Revolutionary ancestry." 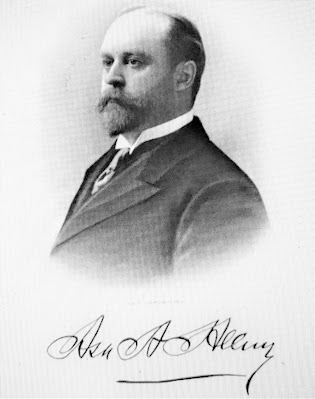 Asa Alling Alling, Representative Men of New York, 1898 (copyright expired)
The Allings' residency would be short lived.  They sold the house a year later, in November 1894, for $200 more than they had paid.  It became home to dry goods merchant Isadore Reinhardt and his wife, the former Mary Simon.
The couple had six grown children.  Matilda and Caroline moved in with their parents, along with Caroline's husband Herman Elsas.  Herman was president of the Continental Paper Bag Company.
A daughter, May Belle Elsas, was born to Caroline and Herman in the house on  June 15, 1897.  The infant would grow up to have a stellar stage career as Mary Ellis--described later by The New York Times as "the young opera singer for whom Rudolph Friml wrote 'Rose-Marie' in 1924 and who later became the queen of musicals in London."
The family bond between the Reinhardts and Elsases was strengthened three months later when Matilda married Herman's brother, Benjamin Elsas, at noon on September 23 in the Red Room of Delmonico's.
Rather surprisingly, in August 1909 Asa Alling Alling's older brother, Robert Bertine Alling purchased the house.  He had married Annie Gordon Smith in 1900.  The couple would have four children, Jane, Bertine, Nancy and Robert, Jr.  They maintained a country home in Poughkeepsie, New York.
Educated at New York and Cornell Universities, Alling was a well-respected attorney.  The family's name appeared in society columns throughout the years.  On March 13, 1915, for instance, the New York Courier and International Topics reported, "Mrs. Robert B. Alling will entertain the members of the Light Horse Harry Lee Society, Children of the American Revolution, with a card party and dance in her house, 131 West Ninety-fifth street, on the night of April 7."
A rather bizarre episode took place in the parlor in the early 1920's.  The 1924 book My Proof of Immortality included "evidential proof" of the existence of spirits of the dead.  It documented, among others, a séance conducted in the Alling home.  During the ritual Annie Alling's mother and another spirit named "Josie" appeared.  According to the account, Annie's mother and the other spirit "gave the minute detailed descriptions of themselves, their former lives in the bodies, clothes, tastes, personalities, etc."
Robert B. Alling died in the Poughkeepsie home on July 22, 1926.  Annie and the unmarried children remained.  Two years later, in May 1928,  Jane Gordon Alling was married to Carleton D. Farrell  in St. Agnes's Chapel on West 92nd Street.  The New York Times reported, "A reception at the home of the bride's mother, 131 West Ninety-fifth Street, will follow the ceremony." 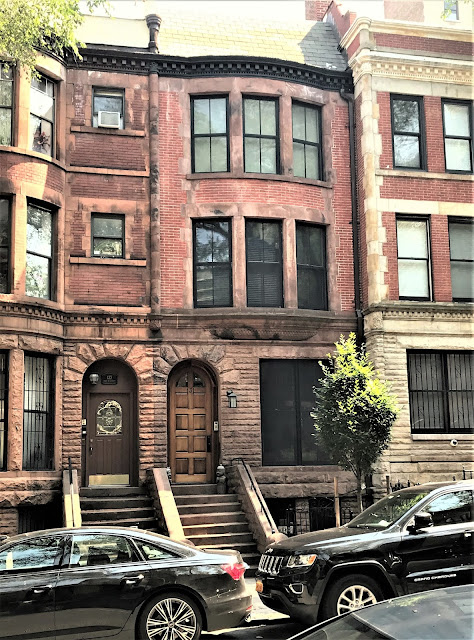 In 1937 the house was converted to apartments--a duplex in the basement and parlor floors, and two apartments each on the upper floors.  The configuration lasted until 2008 when it was reconverted to a single-family home.  The five-bedroom residence was offered for sale in 2013 for $5 million.
photographs by the author
LaptrinhX.com has no authorization to reuse the content of this blog
Posted by Tom Miller at 1:05 AM