John H. Martine bought four building lots at the northeast corner of 10th Street and Sixth Avenue from William Beach Lawrence in 1834.  He immediately began the construction of two houses on the corner.  The other two parcels sat vacant for several years--possibly due to Martine's stretched finances.
The second pair of houses, 138 and 140 Sixth Avenue (renumbered 446 and 448 in 1926), were completed in the mid-1840's.  Each had a store at street level.  Typical of Greek Revival houses, their attic floors were noticeably shorter than the second.  Simple cornices with block brackets and wooden fascia boards completed the simple designs.
John H. Martine moved into the upper floors of 138 Sixth Avenue.  He grew impatient with the city when a potentially dangerous post hole was left unfilled in 1848.  At the Board of Aldermen's meeting on July 17, a request was read:

Petition of John H. Martine, (138 Sixth avenue,) to have a hole in the sidewalk opposite his premises, in consequence of the removal of a telegraph post, repaired.

At the time of his request, William H. Snow (who lived next door at 140 Sixth Avenue) ran his watchmaking shop downstairs.
In the 1840's George W. Delavergne's apothecary store was two doors away at 142 Sixth Avenue.  Around 1851 he moved the pharmacy into 138 and his family into the upper floors.  By now he was partnered with Edward H. Andrew in the Delavergne & Andrew drugstore.
Delavergne seems to have soon leased a room in the store to Dr. Henry A. Luther for his dental office.  His advertisements routinely appeared in newspapers, like this one from 1859 in the New York Herald:

Artificial Teeth--Full sets on pure silver only $8; on fine gold and platina, with continuous gums, $25, and warranted equal to any work in New York.  Single teeth, $1.  Teeth filled and extracted without the least pain by a new process, at 138 Sixth avenue, between Tenth and Eleventh streets.  Dr. Luther, Dentist.

Around 1863 Delavergne opened a second drugstore on Sixth Avenue at the corner of 14th Street.  He hired Thomas J. Macmahan as a clerk in that store.  According to The Druggists Circular years later, Delavergne "sold the older one to George G. Porter.  Notwithstanding this, the young clerk [i.e., Macmahan] was sent at frequent intervals to help in the lower store.
Frustrated with his stagnant career, in 1867 Macmahan "secured the job of introducing the freaks at Barnum's Museum," said The Druggists Circular.  After only one day, Porter convinced him not to return to that job, promising him a better career path.  In 1870 Porter took Macmahan in as a partner and on January 1, 1871 Macmahan bought out his former employer.

Handbook of the Benevolent Institutions and Charities of New York for 1877 (copyright expired)
By the mid-1860's the upper floors were operated as a boarding house.  One of the tenants in 1865 was Henry Dibet, who had recently returned from fighting in the Civil War.  On the night of July 18 Mrs. Mary McCrea looked out her window on Pearl Street and saw three burglars leaving the William G. Thompkins dry goods store across the street with stolen goods.  She went to the police "and described the fellows with minuteness," said The New York Times.  Henry Dibet was positively identified by the witness.  The former soldier "was committed for trial at the Court of General Sessions."
Dr. Luther remained in his space in the ground floor through 1869.  In 1870 at least part of the second floor became home to the Great International Employment Office.  It provided domestic servants, stressing it had both "Protestant and Catholic Irish" girls.

Commercial Register, 1870 (copyright expired)
By 1874, however, the firm's policy of placing Irish Catholic girls had changed.  Now calling itself the Protestant Home Bureau, it advertised on October 16, "All families wanting good servants, German, English and Swedish, good cooks and house-workers, for city or country, apply at the Protestant Home Bureau."
In 1879 Thomas J. Macmahan was one of the organizers of the New York State Pharmaceutical Association.  It was about that time that he sold his drugstore and went into business manufacturing "toilet specialties."  The Practical Druggist noted decades later, "The best known of these was a tooth powder and it is said that Mr. MacMahan [sic] was the first man to put up a dentifrice with a handy shaker stopper."
After having been a pharmacy for decades, in 1879 the ground floor space became an eatinghouse run by Nicholas Crocheron, Jr.   Living upstairs that year were the families of Matthew Carroll, who was in the shoe business, and Valentine Stutzmann, whose barber shop was on West 9th Street.
In 1886 the restaurant was being run by Prosper G. Chaley and R. Lecchi, as the "Prosper Chaley and R. Lecchi Eatinghouse."  A decade later it was owned by Frank Harrison.  He found himself in hot water in March 1894 after a sharp-eyed detective stopped in for dinner.
Several weeks earlier the cashier of the high-end Victoria Hotel, Owen P. Breen, notified Police Superintendent Thomas F. Byrnes that expensive silverware had been disappearing.  Within a six-week period, 349 forks, knives and spoons had been spirited away.
On the evening of March 1, 1894 Detective Valley "dropped into a restaurant kept by Frank Harrison at 138 Sixth avenue and ordered some oysters," reported The Sun.  "While eating them the detective happened to glance at his fork, and noticed peculiar scratches on the handle."  Upon leaving the restaurant, he slipped the fork into his pocket and took it to Police Headquarters.  There, under a microscope, the mark of the Victoria Hotel could be made out, despite having been buffed out.
Harrison was arrested the following day.  "Forty-one forks, knives, spoons and miscellaneous pieces of silverware, all of which were identified by Mr. Breen as belonging to the Victoria Hotel, were found in the place," said The Sun.  At Police Headquarters Harrison confessed, saying he had bought the stolen silverware for $1.50 from a waiter in the hotel, Frank J. Deakin.  It was an expensive deal for Harrison.  "Both men were held for examination in $1,000 bail," reported The Sun.
Not surprisingly, the restaurant quickly changed hands.  It was operated by Herman Wolz by that fall.  He and a customer, Edward Van Name, faced off in court in November that year.  Van Name, who was a clerk for the brokerage firm of Rutherford & Co., was charged with passing a worthless check.  On November 25, 1894, The Sun reported, "The accusation was made by Peter Wolz, who keeps at 25-cent table d'hote restaurant at 138 Sixth avenue...Woltz is an open-mannered, bright young man, and there is no reason to believe that he is not honest in his belief that Van Name is the person who swindled him."
According to Woltz, Van Name was a regular.  "He always sat at the back of the room, near the kitchen, and on the down-town side," he said.  On the morning of October 23, according to Woltz, Van Name rushed in and asked if he would cash a check for $3.85.  It was made out to Christian Clausen.  In court Woltz testified, "It was a small amount, and I had seen the man here often, so I said certainly."
Wolz said he asked him, "Is that your name?" explaining, "You see, I had never known his name.  'Yes,' he said."
A few days after Wolz deposited the check, it was returned "no account."  Wolz laid in wait for his former customer, who had suddenly stopped coming by.  He said:

I wasn't likely to forget him, nor to make any mistake about his identity, for he is not an every-day looking person.  His eyes are different from most persons, and his face is a marked one.  I kept an eye out upon the passers by, and on Thursday morning I saw him go past the window.  I ran right out and caught him.

Wolz had him arrested and Van Name protested his innocence.   "How he can accuse me of having had a check cashed by him I cannot understand...I can realize now how it is that innocent men may be sent to jail, or even hanged."  When pressed about his movements on October 23, he said "It is unfortunate that I cannot remember just where I was that morning."
Although the reporter for The Sun said "No one who casts eyes on him can but be astonished that any one could have mistaken him for another person," Van Name was eventually acquitted for lack of evidence.
In 1897 the restaurant space was remodeled for the offices of the Industrial Co-Operative Building and Loan Association.  With the outbreak of the Spanish-American War the following year, a portion of the offices were given over to a recruiting office.  On April 27, 1898 The Evening Post wrote, "The 1,550 volunteers for William Astor Chanler's regiment, who were enrolled at No. 138 Sixth Avenue, are undergoing their medical examination to-day at that address."
The upper floors continued to be operated as rented rooms for decades.  One was nearly the scene of tragedy in the winter of 1921.  On December 6 The Evening World reported, "Miss Audrey Wack, twenty years old, of 138 Sixth Avenue, was the cause of much excitement at 5 A. M. to-day by being accidentally overcome by gas."
As she slept, the tube of a radiator became detached and fumes filled her room.  The article said, "Another tenant in the house smelled gas and called Policeman Biene, who found Miss Wack unconscious."  He opened the windows, gave her first aid, and by the time the ambulance arrived the young woman had revived.
In 1966 the upper floors were converted to a single duplex apartment.   By 1984 it was home to securities analyst Joseph Pikul, his wife, Diane, and their two children.  Diane Pikul was an assistant to the publisher of Harper's magazine.
Married in July 1978, the couple maintained a summer home in Amagansett, Long Island.  They were having marital problems in 1986 and were seeing a marriage counselor.  Pikul accused his wife of infidelity.
On October 27, 1987 Joseph Pikul filed a missing person report on Diane.  The following day her body was found in a drainage ditch new Newburgh, New York, wrapped in a green car cover.  A forensic investigation revealed her death resulted from strangulation "by hand and by cord as well as by at least 10 blunt force impacts to the head."
Pikul pleaded self-defense, saying that on October 24 his wife had attacked him with a knife.  "I squeezed her neck as hard as I could, trying to get the knife away," he testified.   Pikul was convicted of second-degree murder.  His attorneys appealed, but he died in June 1989 before the case came to trial.  Ironically, his death resulted in his technical innocence.  New York State law demands that if a defendant dies while an appeal is pending, his conviction must be vacated and his name cleared. 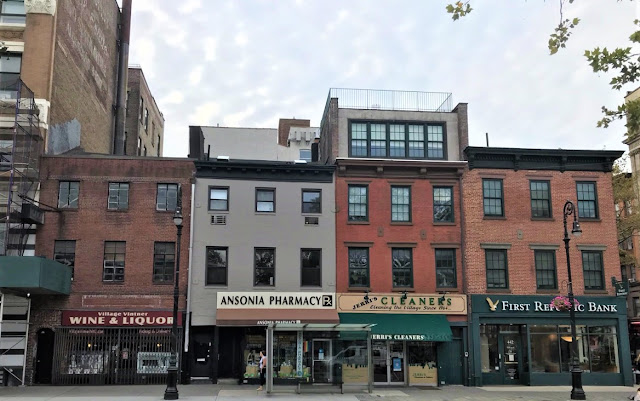 Today there are two residential units above the store.  Appropriately, given its early history, a pharmacy occupies that space today.
photograph by the author
LaptrinhX.com has no authorization to reuse the content of this blog
Posted by Tom Miller at 1:12 AM