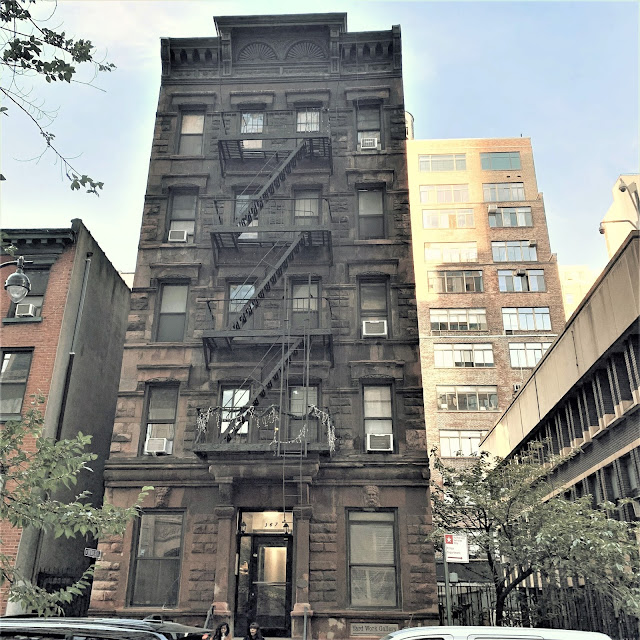 The brooding,  Halloween-ready appearance reflects the building's often dark history.   photo by Ted Leather
Life in the crime ridden Hell's Kitchen district was filled with dangers even for children.  On July 6, 1860 The New York Times reported, "Some wadding from a pistol which was fired by a lad whose name has not been ascertained lodged in the forehead of Albert Nicker, residing at No. 367 West thirty-fifth-street.  The sufferer, who is quite a little boy, was taken home."
For many adults, the bleak neighborhood offered no hope.  Twenty years after little Albert's accident, Thomas M. Drew lived in the same house.  The 74-year-old gashed his throat with a razor and then hanged himself on Sunday night, April 13, 1880.  He left a letter to his son and another to a minister, explaining that his "sufferings" and "mental anguish" had become unbearable.  He was buried at city expense.
In May 1889 developers James H. Havens and Robert C. Winters bought the old three-story building.  They hired architect Ralph Samuel Townsend to design an apartment building on the site.  His plans, filed within days, called for a five-story "stone front flat" to cost $18,000--about $522,000 today.
Townsend's design drew from several currently popular styles--Romanesque Revival, neo-Grec, and Queen Anne.  A stoop rose above the basement level to the first floor, where the  decorations, like the portrait keystones and  the medieval-carved capitals of the pilasters flanking the entrance, were Romanesque Revival.  The chunky, undressed stone of all five floors also drew from the Romanesque.
But, despite their foliate brackets and delicate carvings, the lintels of the upper floor windows were heavily influenced by neo-Grec.  The pressed metal Queen Anne style cornice, with its central parapet decorated with two large fans, might have been as comfortable on a commercial building. 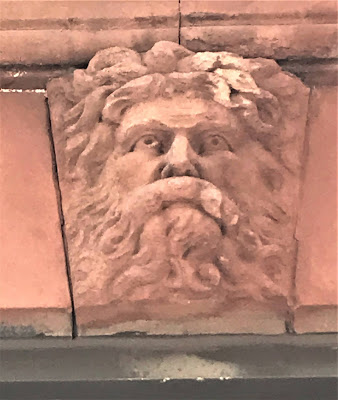 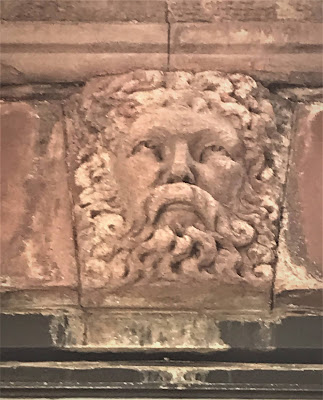 Two stoic portraits grace the keystones of the first floor windows.
Among the first residents was Dr. J. H. Dewey, an author of Christian books and pamphlets.  Oddly, his works were not available in bookstores, but only by mail order sent directly from his apartment.
Perhaps expectedly, most residents appeared in newspapers for the wrong reasons.  Joseph C. Braman, the son of a well-known attorney, was also working as a lawyer in 1893.  But he was arrested on November 9 "on suspicion of burglary and forgery," according to The Press.  He was released when the complainants "refused to identify Braman as the man who uttered the checks."
Living here in 1895 was painter and paperhanger Charles H. Zimmerly.  The 27-year-old was apparently trying hard to improve himself.  He had earlier joined the Twelfth Regiment
of the National Guard and was wounded during the Brooklyn trolley strike that winter.
Things looked up for Zimmerly when he met and fell in love.  He and the "certain young lady upon whom he had centred his affections," as worded by the New York Herald, planned a June wedding.  But then, in May he received orders to attend training camp Peekskill.  The newspaper said, "The struggle to follow the path of duty was severe, but the god of love triumphed over the fear of military injunctions.  Zimmerly was happily married and ignored the notice."
That was a mistake.  On October 28 a city marshal banged on the Zimmerlys' door and demanded payment of a $48 fine "for evading camp duty."  It was a crippling amount for the struggling newlyweds, slightly more than $1,500 today.  While his bride stalled the marshal, Zimmerly escaped out the rear window.  He managed to elude capture for two months, but on  January 8, 1896 the New York Herald reported that "the culprit was arrested in Ninth avenue.  He was placed in Ludlow Street Jail, and there his tearful young wife visited him." 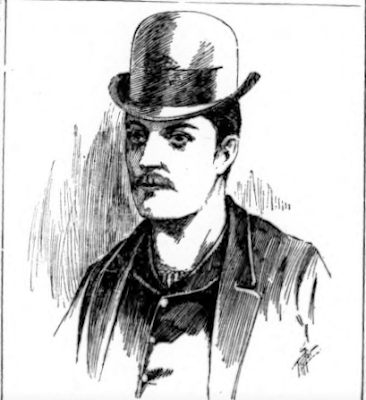 The World captioned this sketch, "Recalcitrant Militiaman Zimmerly.  January 8, 1896 (copyright expired)
Eleven days after being incarcerated Zimmerly complained to a reporter that he could not pay his fine as long as he was locked up.  "Here I can do nothing.  If I was allowed liberty I could soon pay the money," he said.  In the meantime, Mrs. Zimmerly had money problems, too.  The Press reported, "His wife has been informed by their landlord that she will be dispossessed from her home if the rent is not paid by next Saturday."
Hell's Kitchen was home to treacherous gangs and William Engel, who lived in 367 West 35th Street, was a member.  Almost directly next door was the "Thirty-fifth Street Barracks," today known as the Midtown South Precinct station.  For whatever reason John Battigilso, alias "Bottles," was there on January 26, 1897.  When Lieutenant Cosgrove removed Battigilso from the premises, he was attacked "by a gang of roughs on the sidewalk in front of the barracks," according to The New York Press.
Captain Albert H. Endicott came to Cosgrove's assistance.  He was brutally assaulted.  The New York Press said he "was knocked down and kicked in the head and in the abdomen."  His injuries were so severe that two days later the New York Herald reported that he "was in such a critical condition yesterday in the New York Hospital that his friends were not permitted to see him.  Later last night his condition had not improved."
At midnight on January 27 detectives went to Engel's apartment and arrested him as one of the assailants.  It appears that he was slow in giving up information.  After he finally admitted that he was in the fight "and also gave the names of several others," The New York Press said, "Engel was taken to the hospital."
Frankie Bailey was a vaudeville entertainer living here in 1899.  According to The Morning Telegraph, her "curves have for a theatrical season past furnished the antidote for Weber and Fields' dialect and Peter Dailey's persiflage."  On June 6, the newspaper reported she had been "the victim of circumstances and a clever burglar." 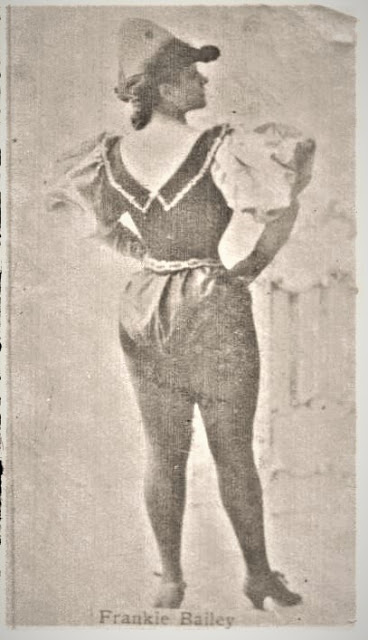 The curvaceous Frankie Bailey graced a cabinet card around the time she lived here.
On June 3 Frankie and her across-the-hall neighbor, Bonnie McGinn, went to the races.  The Morning Telegraph said, "The girls had a good time and a subsequent good dinner, and returned to the humble little flat in West Thirty-fifth street at midnight with a bundle of honestly-won money sufficient to pay the rent and the gas bills for two months to come."
When Frankie turned her key, the lock was jammed.  "When she finally succeeded in getting the door open, she found the rooms she had left in perfect order in a chaotic state and the gas of every chandelier alight."  Fearful, she called Bonnie McGinn to search the apartment with her.  Burglars had been there, "and all the jewels, souvenirs of a hundred conquests, bric-a-brac and raiment that Miss Bailey prized most was missing."
Frankie had lost everything.  "They even took my silk tights, stage dresses and boots," she lamented to the police sergeant.  Ironically, nothing was truly valuable.  "I don't suppose the lot is worth more than $300," she said.
Too often domestic relations within Hell's Kitchen families involved violence.  Carl Schmidt worked as an electrician at the Pennsylvania Hotel in 1924.  He was 36 years old and his wife, Elsie, was 24.  The couple had a seven-year-old daughter, Clara.
Two weeks before Christmas, Schmidt came home to find that Elsie had left him, taking Clara with her.  Elsie found a job working in a delicatessen on Broadway on the Upper West Side, where Schmidt tracked her down.  On December 23 The New York Telegram and Evening Mail reported, "In the presence of more than a hundred stunned shoppers at 148th street and Broadway, Carl Smith [sic]...today stabbed to death his wife Elsie."  Elsie had almost made it to work.  She staggered into the deli and fell to the floor gasping, "He's knifed me."
Shocked witnesses chased Schmidt, overtaking him between Broadway and Riverside Drive.  He confessed to stabbing Elsie through the heart, explaining that a "quarrel arose when she refused to live with him."  On January 28, 1925 he was sentenced to from six to twenty years in Sing Sing prison. 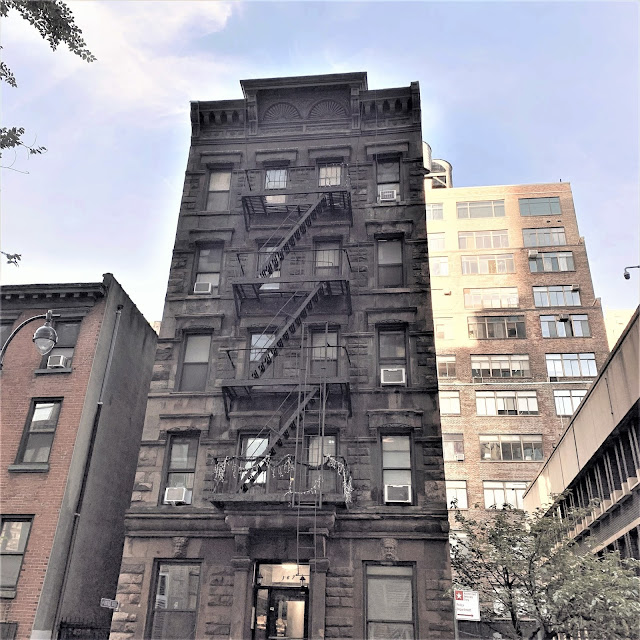 photo by Ted Leather
By the third quarter of the century the Hell's Kitchen  block had tamed.  The building was significantly renovated in 1989, bringing modern amenities to the apartments that would have been unthinkable to tenants like Charles Zimmerly and his bride.  At the same time, any surviving interior 19th century charm was erased.  Ralph Townsend's forlorn façade, however, remains almost unchanged.
many thanks to reader Ted Leather for requesting this post
LaptrinhX.com has no authorization to reuse the content of this blog
Posted by Tom Miller at 1:26 AM