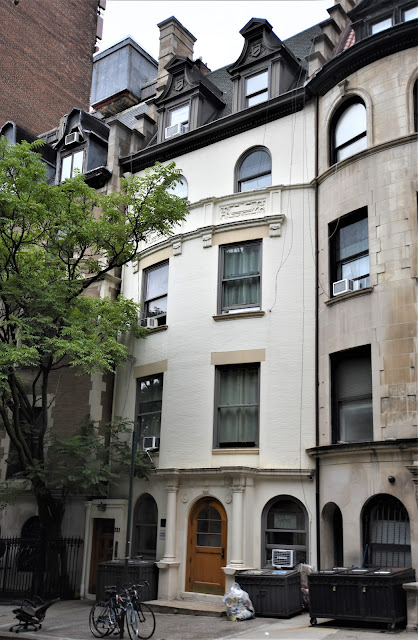 Clarence F. True was among the most prolific architects working on the Upper West Side in the late 19th century.  He would eventually design more than 400 houses in the district, almost all of them a playful take on historic styles.  He turned to the Elizabethan period in 1897 when he designed seven houses that wrapped the northeast corner of Riverside Drive and West 80th Street.
Among them was 321 West 80th Street, which, like its fraternal siblings, was four-and-a-half-stories tall.  The entrance within the limestone base was flanked by engaged Doric columns standing on pedestals.  The upper floors were faced in beige Roman brick and trimmed in limestone.  A paneled parapet atop the three-story bowed facade protected a balcony to the fourth floor.  Here dramatic Gibbs surrounds distinguished the arched windows.  Two complex metal-clad dormers decorated with heraldic shields pierced the mansard attic level.
Soon after its completion, True sold the 24-foot wide residence to Lea M. and Anne P. Luquer.  As was common, the title was put in Anne's name.
Lea McIlvaine Luquer was an expert in mineralogy.  A professor of mineralogy at Columbia University, he wrote several books on the subject, including Minerals in Rock Sections.  The Luquer family according to the New-York Tribune, was "one of the oldest families of New York."  Lea's French Huguenot ancestors had settled the village of Bushwick, now part of Brooklyn.  (Luquer Street in Brooklyn is named for the family.)
Lea's wife was the former Anne Low Pierrepont, the daughter of Henry Evelyn Pierrepont and Ellen Almira Low.  Like the Luquers, the Pierreponts had a long New York history and Anne's grandfather, also named Henry Evelyn Pierrepont, was known as "the first citizen of Brooklyn."  Lea and Anne Luquer had four children, Lea Shippen, Ellen Pierrepont, Thatcher Payne, and Evelyn Pierrepont.
As was the case with all well-to-do New Yorkers, society pages followed the Luquers' movements.  On October 15, 1905, for instance, the New-York Tribune reported, "Mr. and Mrs. L. McI. Luquer and family, of No. 321 West 80th-st., have spent a part of the summer at Bar Harbor, Me."  The family's summer estate there was named Eagle Cliff.
And on May 23, 1908 Brooklyn Life announced, "Mr. and Mrs. Lea McIlvaine Luquer of 321 West Eightieth Street, Manhattan, will sail for Europe next week Thursday by the Deutschland.  They are to return early in September."
Spending the summer season of 1908 in Europe meant that Anne had to dismiss certain servants, and re-staff in the fall.  A skeleton staff (probably two persons) would remain in the house, and two servants--a lady's made and a valet--more than likely accompanied the Luquers on the trip.  But the others would have to find new positions.  Socialites often attempted to help their valued servants, and a month before leaving Anne placed an ad in The New York Times:

Chambermaid--A lady closing her house for the Summer is desirous of finding a situation for her second chambermaid as chambermaid; wages $20; free May 1; may be seen on Monday, from 12 until 4 o'clock.

The second chambermaid was earning a respectable living, considering her position.  The $20 monthly pay would translate to about $145 per week today.
In June 1917 the Luquers sold 321 West 80th Street to Morrill G. Goddard and his wife, the former Jessamine Rugg.  The Goddards had five children, De Witt R., Morrill, Mary R., Jessamine, and Rowenna.
Born in Maine and educated at Dartmouth College, Goddard was hired by William Randolph Hearst as city editor of the Morning World at the age of 20.  A brilliant journalist, he became known in New York as the "infant marvel" and had increased Hearst's circulation from 266,000 in 1893 to 450,000 by the end of 1895.
Perhaps his greatest achievement was conceiving the Sunday supplement.  On October 27, 1917 The Editor & Publisher recalled, "He made the Sunday Magazine sections of the World wholly unique in journalism.  Pictorially, and in text-treatment, they pulsed evenly with life."
The Goddards had a summer home in Vermont, where Morrill's 112-foot yacht, the Bolo, was berthed.  The Goddard children received the best possible educations.  Morrill Jr. (known familiarly as "Morrie" by friends and as "General" by classmates), for instance, was educated at the Horace Mann School and the Tome Preparatory School in Maryland before entering Princeton University.
In September 1924 the West 80th Street house was leased to Mary T. Belden "for a period of years," according to The Sun.  It became Miss Belden's Residence where wealthy out-of-town parents could securely board their daughters attending school in New York.  An advertisement in House & Garden in August 1925 noted, "Chaperonage elective;" meaning that should the parents desire, their daughter would be accompanied by a watchful adult when she ventured out into the wicked city. 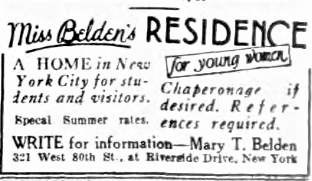 The New York Times, May 17, 1925 (copyright expired)
The house was converted to apartments in 1952.  There were now one apartment and a doctor's office on the first floor, and "apartments and furnished rooms" above.  A single community kitchen served all the spaces.  In 2020 the doctor's office was converted to an apartment but, otherwise, the same configuration exists.  Sadly an ill-advised coat of paint disguises Clarence True's contrast of brick and stone, thereby hiding some of the architectural interest.
photograph by the author
LaptrinhX.com has no authorization to reuse the content of this blog
Posted by Tom Miller at 1:04 AM