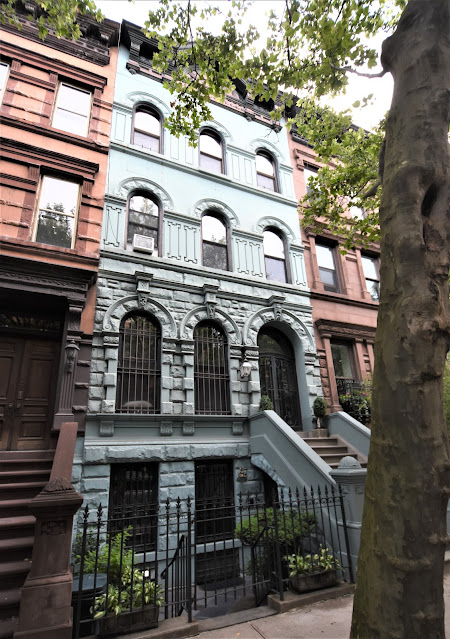 In 1889 developers Charles McDonald and Perez M. Stewart, normally rivals, joined forces to erect a row of ten stone-faced homes along West 78th Street, between Columbus and Amsterdam Avenues.  Architect Henry L. Harris's three designs were configured in an A-B-C-A-B-C-A-C-B-A pattern.  Three stories tall above English basements, the houses were completed in 1890.
The B houses, which included 141 West 78th Street, were designed in the Romanesque Revival style--albeit with Queen Anne pressed cornices.  The basement and parlor floors were faced in chunky, undressed brownstone blocks.  The arched parlor openings were ornamented with hefty quoins and stone eyebrows which terminated in gentle scrolls.  The unusual incised panels capped with molded cornices that separated the windows of the upper floors smacked of wainscoting more expected in an interior space.

The carved keystones of the parlor level include a serpent-like monster.
McDonald and Stewart sold 141 West 78th Street to Edward Dreyfus and his wife, the former Fannie Wallach, on January 31, 1890.  The couple paid $23,500--just over $680,000 in today's money.
The Dreyfuses had one child, Aline, who was about two years old when they moved into the new house.  By the end of 1891 her nursemaid was no longer needed.  An advertisement in The New York Times on November 5 read:

By 1897 141 West 78th Street had become home to Elmer E. and Hannah Cornelia Hartzell.   Born in 1861, Hartzell was nine years older than his wife.  He was the president of the Magi Washing-Crystals Co. and a partner in the garment manufacturing firm of Hartzell, Leich & Wildey.
Elmer was riding along in the Locomobile (a steam-driven automobile) of his friend Dr. Wallace C. Clark on July 30, 1900.  Clark was arrested at the corner of Broadway and 79th Street for speeding--the officer estimating that he was zipping along at 15 miles per hour.  The doctor explained he "wanted to get to a patient's home."  The sergeant was not convinced (the fact that a friend was riding along made that excuse slightly implausible) and Elmer Hartzell had to bail Clark out of jail.
The Hartzells were affluent enough that their movements were noted in society columns.  On May 25, 1910, for instance, The Post-Standard reported "Mr. and Mrs. Elmer E. Hartzell of New York are visiting Mr. and Mrs. W. R. King of Victoria place [Syracuse, New York]."
Hannah was highly involved in the West End Exchange and Industrial Union, formed in 1869.  By 1915, she held the position of corresponding secretary.  The purpose of the organization was to provide an outlet for goods produced by "self-supporting women."  The 1915 volume of the New York Charities Directory noted:

In the Domestic Department are to be found home-made bread and cake, candy, delicacies for the sick, and various kinds of dainties for the table.  Also a large assortment of articles in the Fancy Work Department.  There is a Sewing Department for children's clothes.

In 1916 the Hartzells moved to 222 Riverside Drive.  Rather than sell 141 West 78th Street, they leased it to Dr. Adolph L. Ringer.   Ringer was a professor of clinical medicine at Fordham University at the time.  The respected educator and physician would rent the house until Hannah Cornelia Harzell's death in 1920, after which he moved to 3 West 73rd Street.
Ringer's good name was threatened a few years later.  On January 8, 1923 his automobile scraped the running board of a taxicab at Fifth Avenue and 58th Street.  The passenger was motion picture actress Georgia Hopkins.
Hopkins was best known for appearing in the 1921 silent film Bachelor Apartments, but her career had stalled.  It may have been that she saw the incident as a means of refilling her dwindling bank account. 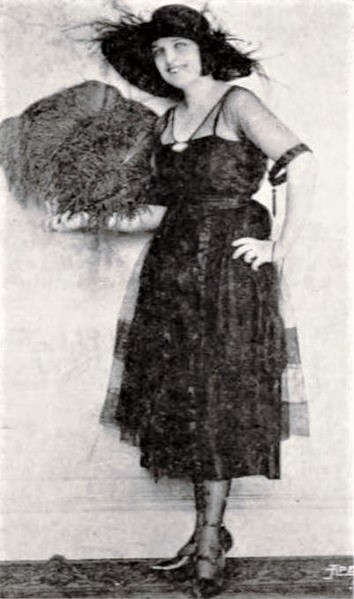 Georgia Hopkins in a still from Bachelor Apartments.  from Exhibitors' Herald, December 1920
In December 1925 the actress sued Dr. Ringer for $25,000, saying that since the accident "her nerves were shattered" and "she has been unable to work."  On December 16 the Daily News reported that in court the "former motion picture actress, was having one hysterical outbreak after another."  The article said she "swooned several times while on the stand Monday, and yesterday was carried out of the courtroom in a faint."
But on the stand, Dr. Ringer testified "that, in his opinion, the former actress was enacting a role."  The Daily News reported, "At [the time of the] collision, he said, she displayed symptoms of hysteria, which, for the moment, he believed were genuine.  After seeing Mrs. Hopkins in the courtroom, the doctor said, he had changed his mind."
Dr. Ringer's attorney brought up another suit Georgia Hopkins had filed ten months earlier.  In February 1925 she sued millionaire Henry Sanford for $300,000 for an alleged breach of promise of marriage.  The lawyer noted that during that trial "Mrs. Hopkins asserted that when she discovered Sanford had a wife the shock caused her to become ill, and that she feared her ailment might be permanent."  It was damning evidence that derailed the actress's case. 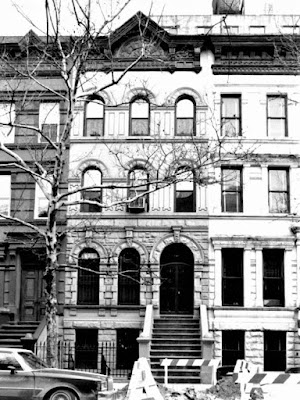 photo via landmarkwest.org
In the meantime the former Hartzell house was being operated as a rooming house.  In 1925 actor Charles Frederick Clair and his wife lived here.  Born in London in 1871, he had come to the United States in 1892.  In 1900 he married Hannah Krueger, a German immigrant.
Living here in 1928 was Hector G. DuBois.  He shared a two-bedroom suite with his wife, Bonnie, and their son, Richard.  Except that Bonnie was married to Harvey A. Gordon at the time.  It all came to a public and sordid two-week divorce hearing in February 1930.  On the stand Bonnie confessed, "I committed adultery between May 31, 1928, and March 15, 1929, with one Hector G. DuBois at 141 West 78th Street." 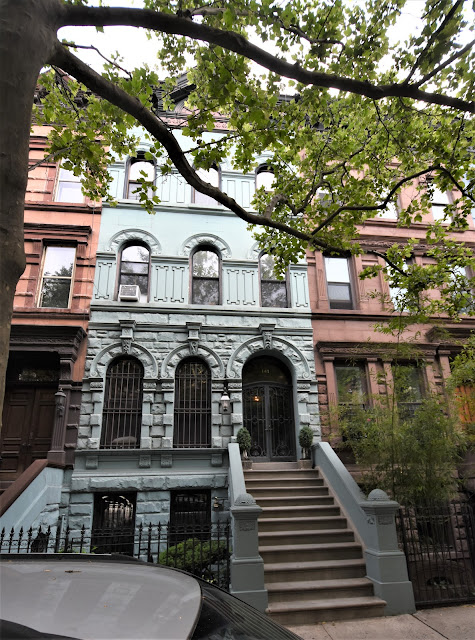 In 1967 the house was converted to apartments.  It may have been at this time that the ill-advised coat of robin's egg blue paint was applied.  Today there is a duplex in the basement and parlor levels, two apartments on the second floor, and one on the third.
photographs by the author
LaptrinhX.com has no authorization to reuse the content of this blog
Posted by Tom Miller at 1:50 AM