An advertisement in the New York Morning Courier in 1831 offered a two-story brick house for sale at No. 506 Broome Street.  It and its identical neighbor at No. 504 were, in fact, two-and-a-half stories tall.  The Federal style residences would have been marketed to merchant class families.
In the early 1850's (until 1856) William Filmer and his family lived in No. 506.  He ran an electrotyping business on Fulton Street.  In 1856 it became home to two widows, Mary J. Pennoyer and Elizabeth Robinson and a boarder, Augustus Steinmetz.  Steinmetz made his living as a pianist.  For the next three years residents would come and go nearly yearly.
The house was offered for sale early in 1859.  An advertisement in the Morning Courier and New-York Enquirer on February 25 described the "two story, attic and basement house and lot."  Another widow, Caroline Barlett, moved in and it was almost assuredly at this time that the house received a significant make-over.
The changes followed the recently popular Second Empire style which was sweeping Europe.  The parlor windows were extended to the floor and the peaked roof was remodeled to a slate-shingled mansard with elaborate, lacy iron cresting.
The first years following the end of the Civil War, however, saw a transformation taking shape in the Soho neighborhood.  Private residences like Caroline Barlett's were being demolished or converted for business purposes.  By 1871 William W. Valleau, Jr. had purchased the house and installed his gold foil business in it.
Valleau had established his business in 1849.  His gold foils were marketed for the most part to the dental industry for use in fillings.  An ad some years later promised "We claim for our foil that it is made of absolutely pure gold, and beaten with the greatest care to produce uniformity and toughness, never losing sight of quality for the sake of cheapness."
He shared the former house with George J. Pack & Co., which was also in the gold foil business.  That Valleau chose a competitor as his tenant is surprising, although the two apparently had a very amicable relationship.  They shared a full page advertisement in the March 1873 issue of the American Journal of Dental Science.
Valleau's business had apparently grown enough by 1877 that he now used the entire building.  The previous year he had been honored at the Centennial International Exposition in Philadelphia (the first official World's Fair in the United States).  The Reports And Awards noted that William Valleau, Jr.'s Dental Gold-Foil was "Commended for purity brilliancy of color, and variety and convenience of forms, for the use of the operator."
In fact, his increasing business required him to hire carpenter N. J. Rigney to erect a one-story rear extension to the building in March, 1880.  The plans described No. 506 as a "workshop and dwelling," suggesting that Valleau's family lived in the upper floors.  He and his wife, the former Sarah Agnes Aitkew, had three children, Clinton Monteith, who was nine-years old in 1880; William Smith Valleau, who was 13; and Charlotte Amelia, who was 17-years old.

Valleau's extremely valuable stock prompted him to subscribe to the Holmes Electric Protective Company on February 1, 1883.  It was an early embrace of modern technology, a forerunner of today's burglar alarm.
William Valleau, Jr. died around 1887, but the firm continued under Sarah and the children.  In January 1889 it was reorganized as The Valleau Manufacturing Co.  Sarah, who had remarried and whose surname was now Griffin, took the position of president, with William Smith Valleau as secretary.  A price list that year explains his father's eagerness to upgrade security.  "Soft and Cohesive Foils," for instance, were priced at $30 per ounce, or about $870 per ounce in today's money.
The firm was nevertheless deceived by a clever scam artist in March 1897.  Edward Merrinan first stopped into the store of Van Houten & Sheldon, respected dealers in paints and painters' supplies, and said "I want to get some gold leaf and as I know that your work is of a high grade, I want to buy my stock from the same people you do."  The Evening Telegram explained that as the representative listed his gold leaf suppliers, Merrinan took one of Van Houten & Sheldon's business cards.
On March 14 he walked into the Valleau Manufacturing Co. and placed an order for four packages of gold for Van Houten & Sheldon, offering the business card as identification.  The firm was a long-time customer and the clerk was not suspicious.  "There was only one package in stock and this he was given," reported The Evening Telegram.  It was not until the balance of the order was delivered to Van Houten & Sheldon that the ruse was discovered.
If the Valleau family had, indeed, originally lived on the upper floors of No. 506, they by no means did by now.  Clinton lived in a handsome home at No. 106 West 71st Street and was a member of the exclusive Manhattan Club.  (William had relinquished his interest in the firm by now.)  The rooms on the upper floor were now home to some of the firm's workers.
A union delegate testified before a hearing of the American Federation of Labor on December 15, 1897.  His words exposed the stark differences between the lifestyles of the Valleau family and their workers.
After four years of suffering and fighting starvation wages, we finally succeeded through organization in raising our wages to the living point.  All employers in the United States acceded to our demands with the exception of three firms [including] The Valleau Co...In the case of the Valleau Co. the majority of the men actually live in the workshop, working day and night for the past two years, and yet their wages do not average $10 per week.
(The $10 salary would equal just under $320 per week today.)
In 1902 the Valleau Manufacturing Co. listed its principals as Sarah, Clinton and Charlotte, whose surname was now Jenks.
The firm was reaching out to a new market at the time.  An advertisement in The International Book-Binder in January 1903 marketed its gold leaf for use in the gold edging for books, as well as providing the labor in applying it.  The advertisement suggests the firm had improved the working conditions, saying in part "We employ none but Union Hands (no boys or girls), and every one a skilled mechanic."
The pressures of business seem to have overwhelmed Clinton in 1905.  He was committed to Dr. McFarland's Sanatorium in Greens Farms, Connecticut for "treatment for a nervous ailment."  Six months later, on May 22, 1906, the New-York Tribune entitled an article "Escapes From Sanatorium" and reported that Clinton was on a trolley car when his conduct attracted attention.  He was arrested by a plain clothes officer.
The article said "He had 25 cents in money and wore expensive clothing.  He seemed anxious to get to New Rochelle and said his trouble would be over if he could only get there."  Clinton's freedom was short-lived.  The article ended "The police turned him over to the sanatorium people."
Sarah Valleau Griffin died on February 22, 1908.  In 1911 only Clinton and his sister Charlotte were listed as owners of the property.  They were leasing the second floor and attic that year to to the Lion Knitting Works, while continuing to operate their firm from the lower section.
A fire broke out in the Lion Knitting Work's stockroom at around 9:00 p.m. on September 23, 1911.  Firefighters were blinded by the dense smoke, so 42 year old Battalion Chief William Devlin led a team to the roof to chop a hole.  The Sun reported "The roof, which tops an old fashioned  building, is peaked at the front but flattens out half way back toward the rear end of the structure.  Firemen were walking on this flat portion."
Firefighters "heard a yell and some of them turned in time to see the chief fall over the edge," said the article.   He first hit the extension that William Valleau had added in 1880, then rolled off, landing on the flagstone-paved rear yard.  Chief Devlin was unconscious when he was taken away.  The Sun said "He suffered serious internal injuries and physicians fear also that his spine was fractured."  He died four days later.  Tragically, Devlin was a widower and left behind five orphaned children.
The blaze was confined only to the Lion Knitting Works, so damage to the Valleau Manufacturing Company's space was limited to water damage.
Following World War I the Broome Street neighborhood declined.   By the early 1930's the former house that had been headquarters of the Valleau family's gold foil business for decades was a printing shop.
The venerable, if sorely treated, building survived until 1947 when it was replaced by a gasoline station.  In 1996 the current three-story building was completed on the site of 504 and 506 Broome. 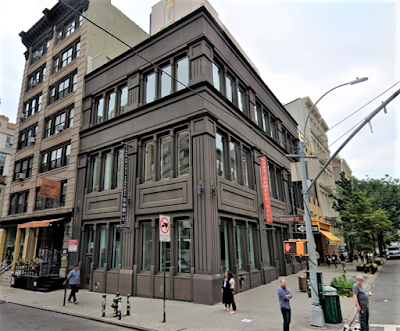