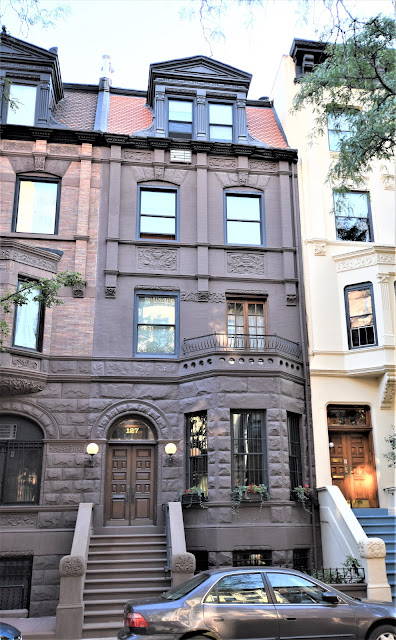 Real estate developers Giblin & Taylor began construction on a row of eleven rowhouses on West 80th Street between Columbus and Amsterdam Avenues in 1890.  Designed by the architectural firm of Neville & Bagge, they would be a blend of styles--Renaissance Revival, Romanesque Revival, and a splash of Northern Renaissance.
The basement and parlor levels of No. 127 were essentially Romanesque in design and faced in undressed brownstone blocks.  A three sided bay provided a balcony to the second floor where Renaissance Revival took over.  Above the cornice a stylish slate-shingled mansard sprouted a formal dormer with fluted pilasters and a triangular pediment.
As the row neared completion on February 11, 1893 the Real Estate Record & Guide said they "stand as monuments of their artistic taste in selection of of the plans and mechanical skills in construction...All of them are four-story houses, and all have butler's pantry extensions, some extending two stories above the basement.
The houses boasted the latest in amenities.  "Messrs. Giblin & Taylor speak with special emphasis about the plumbing in their houses, and with perfect propriety," said the article.  The kitchens were supplied with "Mott's French range, with copper boiler, porcelain sink, and exposed hot and cold water pipes."  The walls were wainscoted to the ceiling and the area behind the sink (what would be called a splash back today) was marble.  "The range is bricked in with red pressed brick that is carried to the ceiling." 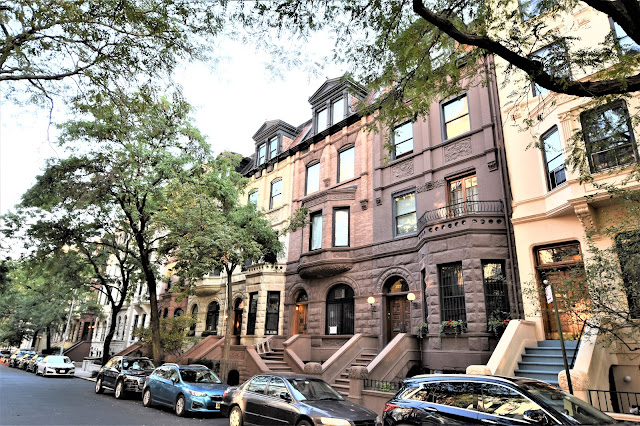 There were three other rooms in the basement level--the pantry, the laundry (which included the dumbwaiter, a servants' closet and porcelain tubs), and a wainscoted front room with parquet flooring.  "This room may be used either as a breakfast or billiard room," suggested the Record & Guide.
The parlor level featured a mahogany vestibule where the double entrance doors could be put "out of evidence" into recesses during warm days.  The interior vestibule doors led to the main hall, also paneled in mahogany and fitted with a French pier mirror.  The "balcony staircase," said the article, was "partly secreted behind a fine fretwork drop arch."  Mahogany pocket doors opened into the parlor and dining room.  "In harmony with the hall, the parlor or salon is trimmed in mahogany, with high baseboards, heavy carved mouldings, a neat fretwork arch in the division from the dining room, and a mantel, also in mahogany, of special and artistic design."
No. 127 saw a quick succession of investor-owners until around 1895 when it became home to Esther Sands, the widow of Abraham Sands, and her daughter, Anna.
The wealthy Sands family had relocated from Denver.  Abraham Sands and his brothers had established the dry goods business of Sands & Boyce in Montana in 1866.  When he moved his family to Denver in 1881 he was head of that firm, as well as president of the Sands Cattle & Land Company, which owned about 8,000 head of cattle.  The Helena Weekly Herald said "he was ranked among the millionaires of the Northwest."  The Sands' idyllic lives had changed on July 7, 1887 when the Helena newspaper ran the headline "Abraham Sands, the Well Known Dry Goods Millionaire and Cattle King, Cuts His Own Throat."  He was 52 years old.
On November 30, 1898 the New York Journal and Advertiser reported that Anna Sands and S. Henry Phillips had been married the previous evening in Sherry's ballroom.  Anna's brother, Sylvester, and her sister, Theresa S. Appel, came from Denver.  Sylvester gave the bride away.  The New York Times added "Mr. and Mrs. M. S. Appel of Denver, brother-in-law and sister of the bride, came East to attend the wedding.  It noted "Mr. and Mrs. Phillips, on returning from their wedding trip, will make their home with Mrs. Sands, at 127 West Eightieth Street."
Theresa and her husband never went home to Denver, suddenly bringing the population in Esther Sands's house to five adults.  S. Henry Phillips was an attorney and Moses S. Appel, who had been a partner with his brothers in the Denver clothing firm Appel Clothing Company, now partnered with Sylvester Sands in the clothing firm of Sands & Appel on Broadway.  The extended family shared a summer home in Far Rockaway.
It was there on August 12, 1903 that Esther died after a lingering illness at the age of 63.  Although Theresa bought out her siblings' shares of the 80th Street house in December 1905, Anna and Henry Phillips continued to live with the Appels.  By now the Appels' grown son, Willard, and his wife and daughter were also living here. 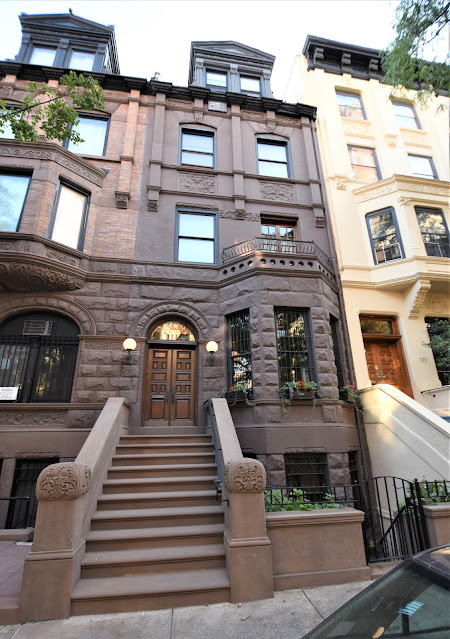 Like most wealthy women, Theresa Appel was highly involved in charitable works.  She hosted a meeting of members and directors of the Denver-based National Jewish Hospital for Consumptives in the house on February 11, 1909.  The Brooklyn Daily Eagle reported "an organization was formed, consisting of members of the hospital, which called itself the New York Auxiliary to the Denver National Hospital for Consumptives."
On October 22, 1911 the family received a scare.  Riding in Willard Appel's automobile that day was his daughter, May, and A. F. Day, apparently visiting from Pittsburgh.  On the Central Park Drive Appel's vehicle collided violently with a taxicab.  The New York Herald reported "Mr. Appel, his daughter and Mr. Day were thrown out of their machine, receiving severe bruises."  Appel's chauffeur and the taxi driver "made charges of reckless driving against each other" and both were taken to Night Court "to determine the responsibility."
Unlike his uncles and father, Willard did not go into the apparel business, but into real estate.  A 1908 graduate of Cornell University, he was president of the Long Branch Bungalow Corporation and vice president of the Kolb Portable Building Company.
In 1918 The Cornell Alumni News noted "During the war the latter company sent a large number of portable buildings to France and Italy, constructed fifty-four huts in Eastern and Southern Camps for the Y.M.C.A...and supplied various departments of the Government with sundry portable buildings."  The article noted that Willard and his family were preparing to leave No. 127 West 80th Street and move permanently to Far Rockaway, New York.
On November 1 that year the family had electrical work done.  The C. M. O'Connor company sent William B. Taylor to the house to do the work.  When S. Henry Phillips arrived home, he discovered a ring and bar pin were missing.  He told police they were worth $1,000--or about $17,000 in today's money.  Investigators searched Taylor's home and found a number of pawn tickets and a police lieutenant's uniform.  The Sun explained his scheme, saying he "plundered apartments where he worked as an electrician by day, and then dressed himself in the uniform of a Lieutenant and disposed of the loot at night."
In 1920 Theresa Appel sold No. 127.  It was immediately converted unofficially to upscale apartments.  Among the initial residents was Mrs. Harry Umbsen.  On December 16, 1921 The Sun reported "A series of afternoon teas are being given on the five Thursdays of this month for a portrait painter of Paris, the Marquise de Fraysseix Mazieres, by Mrs. Harry Umbsen...in her apartment at 127 West Eightieth street."
Also living here were Cuban-born Frank Gonzales and his family.  When the engagement of son Frank Jr. to Josephine de Miranda was announced on October 8, 1922, the New York Herald noted "Mr. Gonzales father has large sugar plantations."
An unnamed bachelor gave a party in his apartment on June 13, 1926.  Several young men and women attended and, at least by housekeeper Josephine Jeanette's estimation, their fun got out of hand.  She found Patrolman August Inella on the street and asked him "to quiet the racket of their music and dancing," said the Daily News.
Inella went to the apartment and told the group to quiet down.  But no one took him seriously.  "The patrolman declined the girls' invitation to join the party," said the article.  "The girls refused to stop.  So they all went to the West 80th st. station house to stay for the night."  The next morning the girls, sisters Vera and Agnes Webster and Mitzi Shubert, were found guilty of disorderly conduct, but given a suspended sentence.  They were clearly instructed by the judge, "There is a time and place to play ukuleles."
Marion and John Hackett lived here at the same time.  They, too, appeared in a courtroom, but for far more serious reasons than ukulele playing.  Marion had previously been convicted of forgery.  Now, in October 1927, both she and John were arrested after she forged the name of Gladys Baker on a check to obtain "cash and phonograph records," according to The Sun.  John was charged with being an accessory.  He was jailed in The Tombs while Marion went to the Jefferson Market prison.
It was a serious charge.  A second conviction of forgery in 1927 would result in a mandatory life sentence for Marion.  She narrowly escaped the fate.  Calling her "a pretty brunette," The Sun said Judge George L. Donnellen had agreed to accept a lesser charge.
A renovation completed in 1969 resulted in a duplex apartment in the basement and first floor, and one apartment each on the upper floors.  Among the residents in 1973 was Michael Schultz, an award winning film and stage director.  He received an Obie Award and the Drama Desk Award for Best Direction, and was nominated for a Tony Award in 1969. 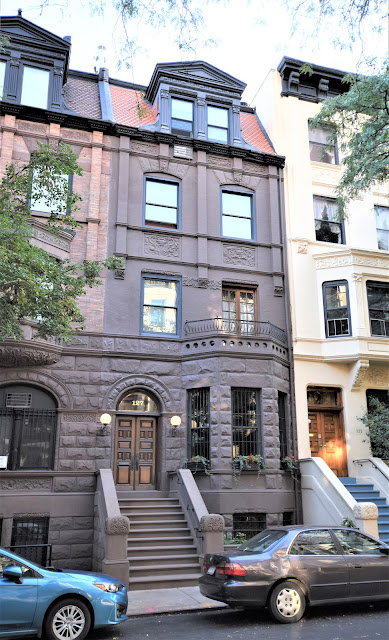 A subsequent renovation joined the second and third floors into a duplex, resulting in a three-family home.  Despite replacement windows and an inexplicable coat of brown paint, the residence greatly retains its 1893 appearance.
photographs by the author
Posted by Tom Miller at 8:30 AM