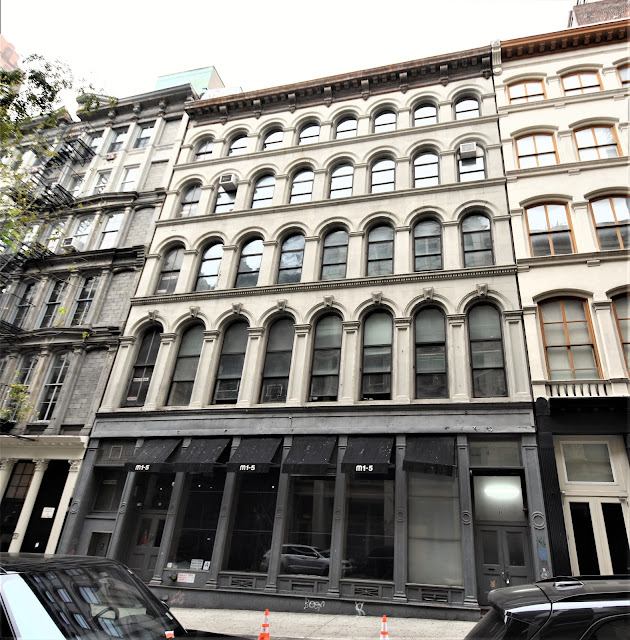 Charles Sandford was a builder in the first half of the 19th century.   He was also keenly aware of the coming changes to the once-residential neighborhood now called Tribeca.  In 1858, three years before the first shot was fired in the Civil War and nearly a decade before rampant development would engulf the area, he began construction on a five-story loft and store building at Nos. 52 and 54 Walker Street.
Completed the following year, the Italianate style structure was faced in stone above the cast iron storefront.  Each story contained arched openings and was separated from the others by an intermediate cornice.  A handsome bracketed terminal cornice completed the design.
Among the initial tenants was C. Marie & Co. which announced its new address in the New York Herald on February 3, 1859.   The firm advertised itself as "Importers of Cloths, Cassimeres and Vestings, and Goods for Men's Wear."  Another early tenants was E. V. Welch & Co., supplier of artificial flowers and feathers for milliners.

A. G. Hyde & Company was in the building by 1870.  Headed by partners Albert G. Hyde and Joseph L. King, the firm imported woolens and boys' wear.   Albert Hyde, fell victim to a scam that year after he was called to the offices of the Society for the Suppression of Gambling on February 9 regarding sensitive information about an employee.  There Rowland R. West, the organization's president, said that "he had positive information that some one was gambling."  That someone was Joseph L. King.
Concerned that if the rumor was true the company's finances could be in jeopardy, Hyde paid $50 for positive information (about $1,000 in today's money).  He was provided with a private detective's report that not only had King gambled in two places one night recently, but that he "was a frequenter of French balls, and that his expenses indicated large means."
West apparently underestimated the close relationship between the partners, and found himself facing a judge on September 19, charged with receiving money for "false representations."
The ground floor was home to the store of John Roll.  On June 28, 1873 Mary Frawley strolled in and looked over fabrics.  She chose two pieces of cloth priced at the equivalent of $2,500 today and left.  The problem was that she had not paid for the goods.  Mary was arrested for shoplifting.  Although she pleaded that "there were extenuating circumstances," she was sent to the penitentiary for six months.
Garment and millinery firms continued to operate from the building.  In the 1880's the tenants included Isidore Rosenthal, dealer in "cloth and woolens;" Benjamin L. Coffin, dealer in hosiery and notions; and furrier S. Rothschild & Bro.
The holiday known today as Memorial Day was called Decoration Day until 1967.  It was so named because flowers and flags were placed on the graves of war veterans.  Thieves took advantage of the holiday in 1884 to burglarize Benjamin L. Coffin's operation.  People living in the area noticed at around 11:00 that morning they saw three men in the store, but assumed they were employees.  The New York Times reported they "saw them coming out from time to time carrying parcels, which they put in a wagon standing around the corner of Centre-street."  While most of the policemen in the district were on duty at the Decoration Day Parade, the thieves made off with the equivalent of about $27,000 today worth of goods.
In 1894 the firm of John McConvill & Co. was reorganized and renamed John McCann & Co.  It dealt in "linens, handkerchiefs, embroidered robes, shawls and woolens."  Like Benjamin L. Coffin, it  was the victims of thieves in 1895, but these were insiders.
In August Captain O'Brien of the Detective Bureau was informed that the firm was "being robbed," according to The Sun a month later.  He put two undercover detectives on the case who "began a system of espionage upon each of the twenty-two employees of the house."  Among the workers being closely watched were two porters, Thomas F. Dwyer and another named McCurry, and a salesman, Edward J. Lavin.
Each day Lavin and McCurry took lunch together at noon.  It was a ploy to give Dwyer the opportunity to operate without his co-worker's watchful eye.  Each day the Lavin would wrap up a bundle of clothing as if for a regular customer.  He left it where Dwyer could easily find it.
The Sun explained "While McCurry was away Dwyer was seen to go every day to the barber shop of Tony Nainoli at 246 West Broadway with a bundle, which he left at the barbershop," said The Sun.  Tony Nainoli was in on the scheme and had been buying goods from the pair nearly every day since the fall of 1892--amounting to as much as $125,000 by today's standards.   All three confessed to the crimes.
The turn of the century saw three manufacturers in the building.  In 1901 A. Galewski and Claus-Townsend Co., both leather goods firms, and Isaac Shaffer & Co., shirtmakers, operated here.   Employees worked long hours at in the early 20th century.  The 40 employees of Claus-Townsend Co., of which ten were teenagers, worked a 60-hour week.
A major shift in the type of tenant occurred following World War I.  In 1917 the Modern Machinery Exchange, Inc. moved its warehouses into the building, touting "we carry a complete line of iron and metal working machinery."  The firm remained into the 1920's.
In the early 1990's Energy and Materials of America, Inc. was in the building.  But the Tribeca renaissance soon visited Walker Street.  In 2005 architect Cheri Caso opened Ray20 here, offering domestic and imported home furnishings.  The pieces were pricey.  Among the items offered in April that year was a carbon-fiber chair manufactured in Holland priced at $650, and a slatted wood chair from Norway at $1,800. 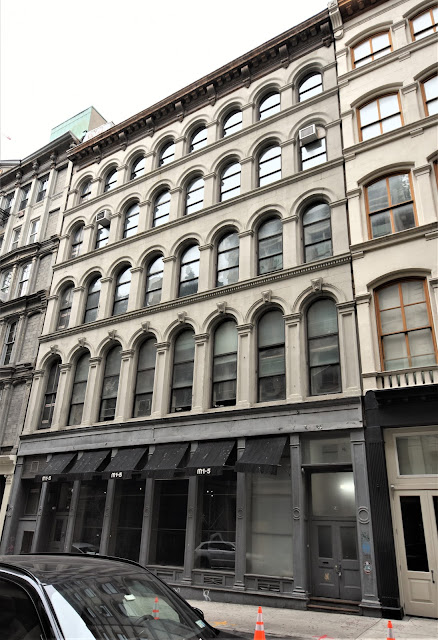 In 2006 the ground floor shop where Mary Frawley once walker out with stolen fabrics became the M1-5 lounge.  The popular night spot continues in the space today.  Unlike many of the Tribeca lofts, the upper floors of Nos. 52-54 Walker Street have not been converted to residential use, but continue to house factories.
photographs by the author
Posted by Tom Miller at 12:57 AM