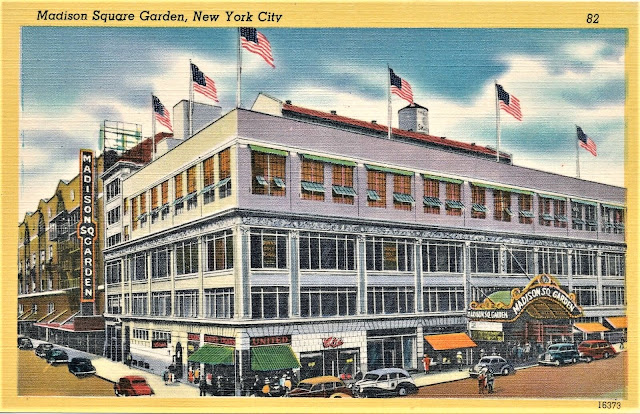 In 1925 one of Manhattan's--and the country's--great architectural landmarks was demolished.  Madison Square Garden, designed by Stanford White, had stood on the edge of Madison Square since 1890.  The venue was the scene of vast concerts, sporting activities, Wild West Shows, mass meetings and other amusements.  There were restaurants, private dining rooms and galleries as well.

It did not take the colorful boxing promoter George L. "Tex" Rickard long to react.  Even as the old Garden was coming down, he was erecting its replacement, the New Madison Square Garden.  Rickard had recruited a syndicate of investors (he called them his "600 millionaires") to back the project and commissioned the renowned theater architect Thomas W. Lamb to design it.

Rickard was a consummate marketer and showman and took every advantage in promoting his new venture.  On August 25, 1925 The New York Times reported "The last rivet in the massive steel frame of the new $4,000,000 Madison Square Garden...was driven yesterday by Promoter Tex Rickard, while Harry Lohman, Vice President of J. J. Stewart & Co., builders, held the brass rivet for the hammering of the air gun in Rickard's hands."

Rickard told reporters that the structure would be opened late in November with a ball, "followed, probably, by a six-day bicycle race commencing at one minute past midnight on the night of November 29."  Rickard was best known for his boxing matches and he was quick to note that the first would be held during the week of December 7.  The New York Times wrote it "will be either a championship battle or a match in which Gene Tunney will compete with a worthy foe."

Lamb's brick and terra-cotta clad structure did not aspire to architectural greatness, looking perhaps more like a factory than an entertainment venue.  The massive arched marquee was its most distinctive aspect.

Inside, the main arena was capable of seating 20,000.  The building was designed so it was possible to hold two large attractions at a time, with a total capacity of 33,000 persons.  Below the arena floor was an exposition hall "where all varieties of shows can be accommodated simultaneously."  Rickter already had a broad spectrum of  undertakings in mind, including "boxing, hockey, various athletic attractions, horse shows, dog shows, &c., industrial and commercial expositions, professional and political assemblages, balls, concerts, [and] entertainments," according to The New York Times.  The newspaper said "The building is an improvement over the old Garden in every respect.  It has an up-to-date ventilating system, elaborate piping and refrigerating plan for supplying the ice for hockey, which is to be one of the major sports."

That "ventilating system" was important to Rickter, who knew fully well that many (or most) of his boxing fans were smokers.  To accommodate them, according to The New York Times, he had commissioned "an air-cooling system providing for a frequent change of air, which will permit smoking."

The total cost of construction topped $5.5 million.  That amount would be equal to more than $80 million today.

On November 28, 1925 The New York Times reported "Tex Rickard will see the realization of an ambition tonight.  The new Madison Square Garden, the imposing structure at Eighth Avenue, between Forty-ninth and Fiftieth Streets...will open its doors to the public for the first time."  The six-day bike race which started that evening at 9:00 would predate the official dedication ceremonies by about two weeks.  "Still the new arena does open tonight upon its career as the greatest building of its kind the world over," said the article.

It was an invitation-only event, and the 17,000 people who flocked in that night were most likely less interested in the bikers than in the arena itself.  "Men and women prominent in different walks of life have been invited to see the program," said The Times.  "It will be a gala occasion, indeed."

It was not long before the New York State Athletic Commission snuffed out Tex Rickard's promise to his boxing fans that there would be smoking within the Garden.  Smoking was disallowed in enclosed spaces by the Commission.  Despite Rickard's state-of-the-art ventilation system which cost him the equivalent of $2.2 million today, The Buffalo Times reported on February 19, 1926, "the boxing commission insists that the Garden shall have no privileges not enjoyed by the smaller clubs and the ushers there have been ordered to prevent smoking."

Only months after the Garden's opening, Rickard considered improvements.  On April 3, 1926 The New York Times announced "The promoter further is looking ahead to making the Garden roof a tennis centre...Rickard said that he was making arrangements to install six tennis courts on the roof of the Garden."

In the meantime, Rickard continued to book attractions that would draw thousands.  In 1926 the Barnum & Bailey Circus thrilled crowds and in the fall of 1927 the World Series Rodeo opened.  As preparations for that event were being made on October 1, the rodeo's manager Fred Beebe told reporters "Champions of all the principal preliminary rodeos of the west and Canada will be here and Broadway sure will look like the main street of a wild western town at roundup time long before the opening of the World Series Rodeo on October 25."

As early as 1921 Rickard was diagnosed with appendicitis.  But he had what a newspaper called a "dread of surgery."  A few days before Rickard left for Miami Beach on December 26, 1928, Jack Dempsey's former manager stood in his office and told about his recent surgery for a sinus problem.  "You shouldn't ever let them cut you that way," Rickard had replied.

His six years of ignoring his condition caught up with Tex Rickard on New Year's Eve.  He was rushed to a hospital with gangrenous appendicitis.

Heavyweight boxing champion Jack Dempsey rushed to his bedside.  On the day before his death Rickard told him, "Jack, I've got this fight licked."  At around 6:30 the following morning, according to his doctor, "Just before the coma overcame him, he opened his eyes and said: 'I'm getting a tough break, but I'll fight."  On January 7, 1929 newspapers around the country reported on his death.

Accolades poured in from across the globe.  The New York Times said "Actors, business men, brokers paid tribute to his qualities of character and achievements."  Among them were Mayor James Walker, former New York Governor Alfred Smith, and entertainer George M. Cohan.

Although the Garden may have been best known for its circuses, rodeos and boxing events, it was a 27-year old figure skater who caused the sensation of 1938.  The Highland Democrat reported "The biggest thing on the telephone in the history of showdom, it is generally agreed, was Sonja Henie's ice revue.  She caused her first big telephone jam when at Madison Square Garden...some callers reported trying for two hours before getting through the Garden's switchboard to the box office."  During her 10-day appearance the operators fielded an estimated 35,000 calls.

The Garden was also used for political rallies and conventions.  One, on February 20, 1939, caused an major incident.  The German-American Bund booked the space for a mass meeting.  Foes of the Nazis were outraged, and Mayor Fiorello La Guardian received a letter that threatened a bombing.  The following day the Daily News ran the headline "Police Break Up Anti-Nazi Crowd At Bund Meeting" and reported that 25,000 protestors "jammed every street leading to Madison Square Garden at 6:00."  An hour later a second protest erupted.  "Two hundred Socialists carrying anti-Nazi banners staged a ten-minute riot with 100 patrolmen outside Madison Square Garden," said the article, "and would have bested the police were it not for the timely arrival of mounted reinforcements."

The Garden was the scene of a War Bond event on September 11, 1943.  The Brooklyn Daily Eagle reported "Judy Garland is one of the stars signed up for a personal appearance in the Hollywood Bond Cavalcade...The show is expected to realize $86,000,000 in War Bond sales here and then move on to other cities." 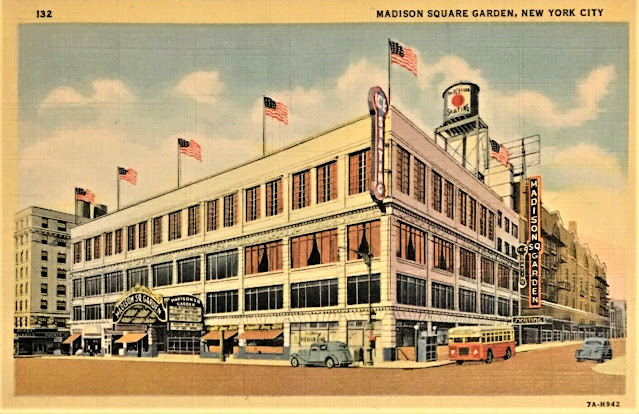 Another celebrity event occurred on May 26, 1954 when Liberace held a concert here.  The Brooklyn Daily Eagle captioned a photo "Dimpled pianist Liberace, dressed in jazzy white silk tails, makes his entrance at Madison Square Garden where his concert attracted some 14,000 persons--75 percent of whom were women."

At the time the days of the Garden were numbered.  On April 2, 1964 a United Press International release reported that the Madison Square Garden Corporation "is the major sponsor of a new sports arena to be built over Pennsylvania Station in New York City.  The new arena will be 75 percent owned by Madison Square Garden Corporation, and 25 percent by the Pennsylvania Railroad."

Almost three years later to the day The New York Times reported "The new Madison Square Garden Center, being erected on the site of the Pennsylvania Station, is expected to be in full operation by year's end."  In 1968, following the opening of the new venue, demolition of the former Garden began.  The site remained vacant, used as a parking lot, until 1989 when Worldwide Plaza, designed by Skidmore, Owings and Merrill, was completed on the site.