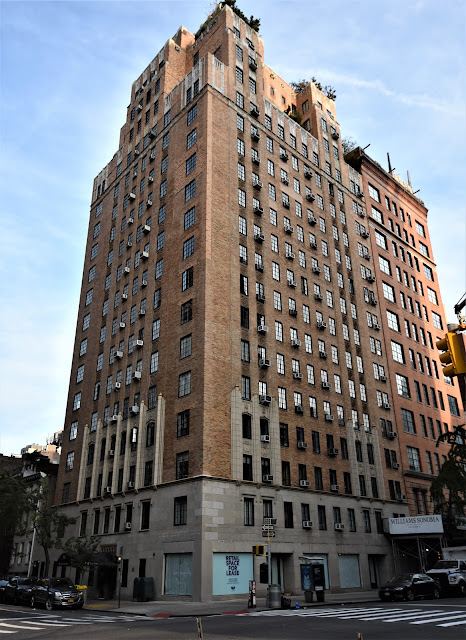 Henry Mandel started out in the real estate business erecting tenement buildings with his father.  Following World War I his firm, the Mandel Companies, erected progressively larger and more elaborate projects.  Mandel's aggressive building plans reached an apex in 1929 when he laid plans for the massive London Terrace project on West 23rd Street and four architecturally harmonious apartment buildings on each of the corners of Seventh Avenue and 16th Street.
The onslaught of the Great Depression upset Mandel's plans for the "Chelsea Corners" undertaking and only three were built.  Like its fraternal twins at Nos. 200 and 161 West 16th Street as well as the London Terrace, No. 201 West 16th Street was designed by Farrar & Thompson.  The architects melded the Jazz Age with Gothic Revival, creating a striking brick, limestone and terra cotta delight.
Eighteen stories tall, the two-story base incorporated two shops on the avenue, while the residential entrance was centered on the side street.  Gothic elements, like the square-headed drip moldings over the second story windows and the handsome double height stone embellishments at the third and fourth floors, successfully coexisted with the sleek Art Deco lines of the structure. 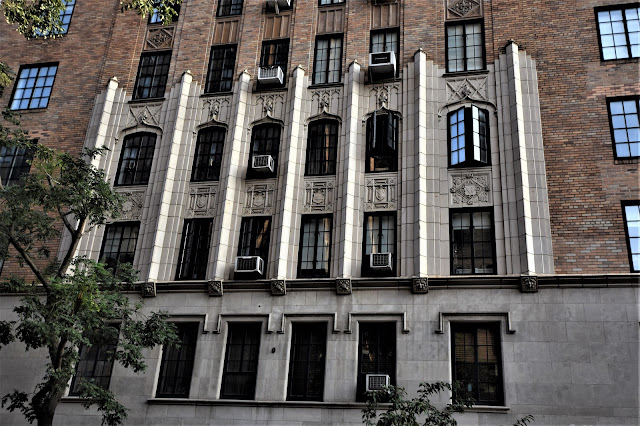 On December 8, 1930, as the building neared completion, tragedy struck.  The Standard Union reported "A scaffold on the tenth story of a building under construction at 201 West Sixteenth street, Manhattan, collapsed to-day plunging four workmen to their deaths on the roof of a one-story building next door."
The building was officially completed on September 16, 1931, although tenants had begun moving in earlier.  They were lured by the modern conveniences--a laundry in the basement, Electrolux refrigerators, and uniformed doormen and elevator operators.  The $40 rent for a studio apartment would be equal to about $671 today--a significant amount for New Yorkers struggling during the Depression.
Among the initial tenants were the E. Howard Mowbray family, accountant William Bringhurst, and Henry Robert Mandel and his family.  Mandel was the son of the building's developer and worked within the family firm.
The Mowbrays appeared in the society columns repeatedly.  E. Howard and his wife, Jane, had one daughter, Edna.  The family had a summer home far upstate in Elmira Heights, New York.
Edna was involved in the formation of a young ladies' social club in 1931 and on November 18 the Star-Gazette reported "The Nona Club held its first meeting Monday evening at the home of Miss Edna Mowbray, 201 Wet 16th Street.  A delightful evening was spent and dainty refreshments were served."  The following year, in August, Edna "entertained with a variety shower" for Edna Biernbrauer.  The Star-Gazette noted "The honor guest received many attractive gifts.  Bridge was enjoyed during the evening, followed by a dainty luncheon."
On June 5, 1933 the Mowbrays hosted a party at which Edna's engagement to Howard J. Griswold was announced.  It was cleverly revealed in a heart-shaped jig-saw puzzle containing a photograph of the couple.
In the meantime, Henry Mandel filed for bankruptcy in 1932 and was jailed in 1933 for failure to pay alimony.  His son, who used his first initial and middle name, possibly to distinguish himself from his father, now became vice president of the Chelsea Management Corporation.  Despite his father's substantial financial problems, his career thrived.  In 1938 he published a reference book for agents, lawyers and property owners entitled Real Estate Management.
Mandel and his wife Rose had a son, Paul William.  They were both highly involved in charitable, civic and artistic issues.  In 1934 Mandel became a member of the Art Students' League.  But his interest was not merely philanthropic.  He studied art under Carlos Egas, Gregario Prestopino, Victor D'Amico and Sol Wilson.  By the end of the 1950's he would have several one-man shows and, while he considered his art a hobby, was accepted as a serious painter.  He was, as well, the president of The Village Art Center Gallery on Grove Street.
Another visible tenant was David Dubinsky, president of the International Ladies' Garment Workers' Union.  Labor unions held enormous power at the time.  While Dubinsky was instrumental in achieving gains for the thousands of garment employees through strikes and protests, he was also accused of forcing members to follow the union line without question.  On November 2, 1936, for instance, The New York Sun reported "Final 'voting orders' went out to the members of the International Ladies Garment Workers Union today."  In the messages president David Dubinsky said in part "Cast your own vote and get your family and friends to vote for Roosevelt and Lehman."  The Sun said that the hand-delivered messages were a "more-than-gentle hint that the union expected every member to do his or her duty at the polls tomorrow."
Paul William Mandel graduated cum laude from Harvard in 1951 and then studied at Harvard Law School.  He was married to Sheila Reid Emslie on August 20, 1956.
His parents continued to be active in social causes.  Rose was head of the Community Service Society on East 22nd Street in 1959, described by The Villager as "The largest volunteer, non-sectarian, family service agency in the world, both in terms of cases handled and expenditure."  That year H. Robert became involved in the rescue of the historic and architecturally important Jefferson Market Courthouse in Greenwich Village.  Abandoned and home to rats and pigeons, the city slated it for demolition to make way for an apartment house.  The Villager reported on November 25 that "a group of noted sponsors headed by H. Robert Mandel, 201 W. 16th St., [propose] the use of the prison site as a Village Cultural Center...The Mandel plan would renovate the existing building for use as a cultural center."  He remained involved in the issue until the preservation of the building was finally secured more than a decade later.
Other tenants of note were attorney Edward Kuntz and his wife Beatrice.  Like David Dubinsky, Kuntz was heavily involved with labor issues.  He was one of the trial counsels of the International Labor Defense and routinely defended pickets arrested during strike demonstrations.  Among his most memorable cases was his defense of Morton Sobell, who stood trial in 1951 with Julius and Ethel Rosenberg on charges of spying for the Soviet Union.  Kuntz and his wife were still living in No. 201 in April 1957 when he died. 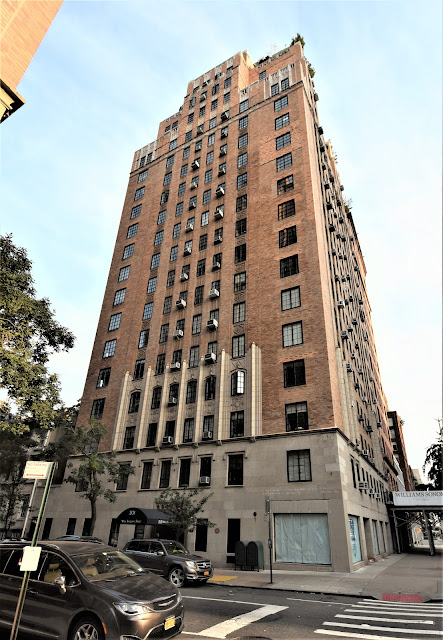 Little has changed externally to Farrar & Thompson's 1931 take on Gothic Revival.  There are still 40 apartments per floor, as there were on opening day.
photographs by the author
Posted by Tom Miller at 1:30 AM