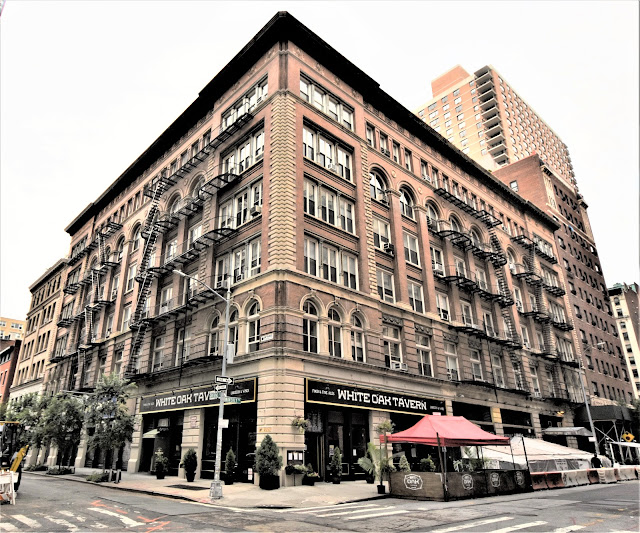 The flurry of development taking place in the former upscale residential neighborhood just east of Washington Square was in full swing in 1890.  All around elegant brick-faced homes erected for the likes of Cornelius Vanderbilt I were being razed to be replaced by substantial loft buildings.  On June 28 alone the Real Estate Record & Guide reported on the sale of a dozen properties on Greene Street and on Waverly Place.  Among them were six houses at the corner of Greene and Waverly Place purchased by developer and builder Jeremiah C. Lyons.  He paid the equivalent of $10.5 million for the parcel which, said the article, "is to be improved with a large business building."
And indeed it was.  Lyons hired the architectural firm of Buchman & Deisler to design six loft structures that would appear as one.  Their plans, filed in March, included clever innovations.  The Record & Guide reported "There will be a courtyard in the middle of the plot about 40 feet square, with elevators and platforms on each side, and an entrance on Greene street.  This feature will enable the firms occupying the buildings to do all their loading and unloading of goods on the inside, and at the same time prevent blockades on the street."
The article added "Still another important feature will be the erection around the building on the courtyard of an iron platform, in which the water and waterclosets will be located, thus keeping water out of the main buildings and preventing the destruction of goods by overflows, besides securing good sanitary results."  The cost of the brick and stone-trimmed structure was projected at $280,000, bringing Lyon's total outlay to around $18.7 million in today's money.
The building filled with millinery and clothing manufacturers.  Among the earliest and largest was Hirschberg & Co., makers of hats and caps, including its Victor Headwear brand.  Gustav Hirschberg had founded the firm in 1871 and his son, Sidney G. Hirchberg, joined the firm in 1891, the same year it relocated to Waverly Place.  At its "immense factory" here, as described by The American Hatter, it produced "cloth, straw and felt" men's hats.
Other early tenants in the massive complex were H. M. Bloch & Brother, makers of "trousers and breeches;" Glueckman & Gross, boys and children's wear manufacturers; and John R. Walker, importer of Irish linens like shirt fronts and handkerchiefs.  The Clothier and Furnisher called Walker in 1896, "a gentleman of Irish extraction, pleasant-faced, and most amiable to meet...He gives the small man the advantage of a few yards of shirtings when he needs them, and an order for two or three dozen of handkerchiefs is never passed by."
Organized labor was increasingly a thorn in the sides of factory owners in the 1890's.  Firms who stood fast against the demands for reduced hours, more humane working conditions and better wages, often saw their workforce walk out.  The power of the individual unions was increased when the various branches joined forces.  Peavy Brothers discovered that in the spring of 1893 when a strike that seemed to have nothing to do with its factory hit home.
On March 23 The Evening World reported "A breach between the Manufacturers' Association and the United Garment Cutters has widened.  To aggravate matters the attitude of the Knights of Labor and the United garment Cutters has now become one of openly-declared hostility."  The article said "A strike of thirty men has been declared at Peavy Brothers, 15 and 17 Waverly place, because the firm refused to comply with the request of the Garment Workers Union to promise to support their workingmen during the threatened lockout."
A decade later Hirschberg & Co. was shut down.  On December 22 the associated cap and hat makers unions initiated a city-wide walk-out.  This time management did not concede to what the firms felt were excessive demands.  Three months later, according to Men's Wear, "The strike has cost workmen $220,000" in lost wages.  "It seems bosses gained all points demanded, but will remove the open shop placards."  ("Open shop" signs announced that non-union workers were accepted.)
While the unions were guaranteed that none of the striking employees would be fired, the settlement agreement did not include any pay raises or reduced hours, and noted that employers could "engage and discharge whomever they see fit and "no officers or delegates of the union to visit the shops."

Sidney Hirschberg immediately released a statement promising his customers "We are in a position to fill all orders promptly...We are in a better position that ever before to turn out work promptly, because of the new conditions under which the men are working."  The factory employed around 114 workers, mostly men.
Gross & Weiss employed an even larger workforce in its women's apparel factory.  But unlike Hirschberg & Co., the majority of its 171 workers were female.  Two of them were greatly annoyed with their foreman, Morris Waldman in the winter of 1909.  On December 17 The New York Call reported "Bertha Elkins was sent to the workhouse and Bessie Schechter was fined $10 on the charge of throwing rotten eggs at Morris Waldman."
Elevator malfunctions in the early 20th century were common and the Waverly Place building was not immune.  On May 24, 1915 The Daily Standard-Union reported "Leopold Korn, 54 years old...was operating a freight elevator at 17 Waverly place, Manhattan to-day, when the cable broke, Korn falling three stories."  Luckily he suffered only a broken leg in the accident.
The buildings continued to house millinery and apparel forms in the years following World War I.  In 1919 the Fine Hat Manufacturing, one of the early tenants, was still here, as were Hirschberg & Co., and Marshall's, Inc., hat makers.
It appears that Hirschberg & Co. was not above knocking off other firms' designs.  A help-wanted advertisement in 1923 sought "millinery copyists on misses' and children's high grand hand made hats."
In the 1930's and '40's tenants included Siegal & Glass, men's clothiers; the Arkay Dress & Sportswear Manufacturing Company; the Cloth Headgear Manufacturing Company; and Philip Dann Clothing Company. 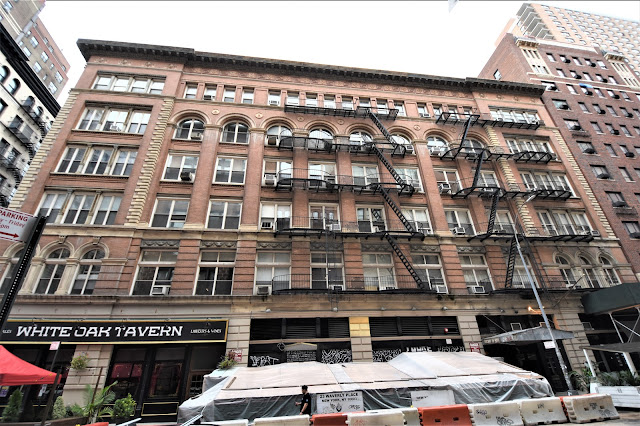 Philip Dann Clothing made uniforms for the United States Army.  Its factory was understandably operating at full steam during the World War II years.  Until the last quarter of the 20th century workers were paid in cash, each receiving a pay envelope once a week.  It was a system that invited disaster as crooks, who knew that once a week the large payroll would be withdrawn from the bank, would spy on the comings-and-goings of employees to learn the routine.
On February 5, 1943 the Brooklyn Daily Eagle reported "Two gunmen today followed Abe Spitalnik, 25...office manager of the Philip Dann Clothing Company...into the elevator there and robbed him of the firm's payroll of $5,800."  The heist would be nearly $86,000 in today's money.
The renaissance of the district around New York University in the 1970's arrived here in 1972 when the upper floors were converted to apartments--24 per floor.
By 1977 the Village Skating Rink was in the building.  On December 23 that year the Daily News wrote "The disco music blares, and the roller skaters rock to the beat.  They slide...they glide...round and round they go, singly, in pairs, in groups, nearly always smiling.  They scene is Village Skating, (15 Waverly Place) and the action is pure and simple with teenagers, young adults and a sprinkling of older adults sharing the space as they wheel around the rink."
In 1979 Syncopation opened in one of the ground floor spaces.  The Daily News reported on June 27 "So there is yet another jazz club, Syncopation, at 15 Waverly Place just off Washington Square Park.  It's a long, narrow room with walls taken down to the bricks and, for those who will be impressed, white tablecloths." 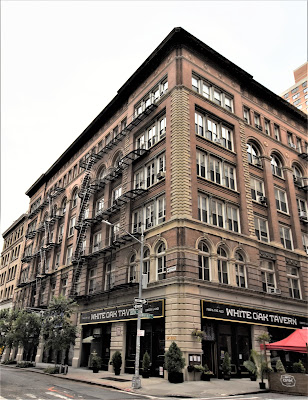 Other businesses over the next decades would be the Star of Siam Thai food restaurant in the early 1980's; Club Paradise in the late '80's and early '90's; and the Apple Restaurant, which opened around 1993 and remained more than a decade.  Today the White Oak Tavern occupies most of the ground floor.
photographs by the author
Posted by Tom Miller at 1:46 PM