Erected in 1871, the Ninth National Bank building was a five-story marble clad, Second Empire style confection of columns and ornate dormers, decorative urns and a slate-tiled mansard roof.  It ceased to be used for banking purposes in 1917 and a decade later, on May 8, 1927, the Manufacturers Safe Deposit Company announced it would open a branch on the site.
Within only five months the monumental marble pile was gone, replaced by a new structure.  Designed by Archibald F. Gilbert, the new two-story bank building had nothing in common with its predecessor other than its purpose.  Gilbert avoided the popular Art Deco style, choosing instead to impart a feeling of stability and assurance to the banking customers with a neo-Classical facade.   Faced in limestone, it featured four Ionic pilasters which upheld an entablature announcing the bank's name in bronze letters.  Bronze paned windows flanked the massive arched entrance framed in veined marble.  A balustraded parapet perched atop the cornice.
Until the last decades of the 20th century most employees were paid in cash.  Once a week a clerk would walk to the bank, withdraw the significant amount, and return to distribute the money into pay envelopes to be passed out to the workers.  The process was an opportunity for thieves, who over and over again surveilled the movements of clerks, learned their routines and then moved in to rob the payrolls.
Two would-be robbers were foiled in their attempt to snatch the payroll from Abraham Lerner on April 4, 1933.  The Great Depression made the prospects of fast cash attractive for Brooklynites Martin Sharkey and James Broyde.  The young men (they were 24 and 25 respectively) had never attempted a payroll heist before, but that afternoon they targeted the shoe dealer.
Lerner's business was not large and his payroll was only $350 (more in the neighborhood of $7,000 today).  Sharkey and Broyde most likely had no idea of the amount, but nevertheless loitered in the bank as Lerner withdrew the money.  Unknown to them, Detectives Duffy and Quinn were also watching the bank from outside.
The detectives watched Lerner walk out of the bank, followed by the two men.  And so they joined in at a distance.  When Lerner entered his building at No. 42 Walker Street Sharkey and Broyde seem to have lost their nerve.  The Times Union said they "did not enter and turned away."  But Detectives Duffy and Quinn stopped them, only to find guns, handcuffs and a length of rope--all the tools they needed to overpower the shoe dealer and take his payroll.  The men, "suffering from jumpy nerves and slightly wobbly hearts," according to the Times Union, were held on charges of conspiracy to hold up a payroll carrier and having concealed weapons.
Another man with "jumpy nerves" was one of the bank clerks two years later.  On June 29, 1935 a taxi driver brought in a check to be cashed.  The clerk was suspicious and tripped an alarm.  The Daily News reported "three radio cars, with howling sirens" responded and traffic at Canal Street and Broadway was blocked for 15 minutes.  The embarrassed bank officials "would not reveal the name of the driver and said it was 'all a mistake,'" said the article.
Like Abraham Lerner had been, Philip Bloomberg, was the payroll master of his employer, the Forrest Paper Co. and his assistant Henry Strom, had been watched by crooks in the summer of 1938.  For added security Bloomberg and Strom did not walk, but used an automobile for their bank trips.  But unlike Lerner's would-be attackers, these were professionals.
The men left the bank with today's equivalent of more than $26,000 in cash on June 24.  As they pulled the car onto Broadway, two "armed thugs" as described by the Daily News, jumped on the running board and pointed their guns at the men.  The crooks got in the back seat and ordered them to drive.  "With guns in their backs, the victims drove on until they were ordered to stop in front of 65 Wooster St.," reported the article, "where they were told to get out."  Bloomberg and Strom were left on the sidewalk, thankfully unhurt but no doubt shaken.  The abandoned car was later found on Mercer Street. 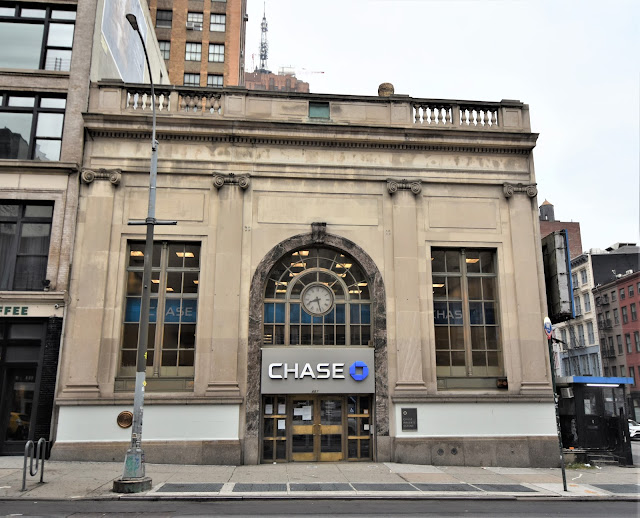 Charles Heard had worked as a teller in the branch at 407-409 Broadway since its opening.  In 1939 he was making $40 a week (a yearly salary equal to about $38,200 today).  The meager wages supported him, his wife, and their three children--but not his "penchant for betting on horse races," according to his wife.  Heard's gambling addiction led to the family's losing their house in Queens.  In the summer of 1939 they were renting a small house directly across the street from their former home.  In addition, Heard was abusive, according to his wife Mae Elizabeth who said he had beaten her on several occasions.
The bank held a company picnic on Friday June 10 that year.  Heard hid the fact from his wife, possibly to eliminate any possibility that she would accompany him.  He did not come home until late that night and overslept the next morning.  At the breakfast table he announced he did not feel like going in to work that day.  Mae Elizabeth was terrified he would lose his job and an argument broke out.
Heard stood up and raised his fist.  Mae Elizabeth later said "she knew what was coming."  She picked up a 10-inch carving knife as her husband "raised his left arm as if to hit her," reported the Daily News.  Mae Elizabeth plunged the knife into his heart while their two daughters, 17-year old Virginia and 9-year old Mary looked on.  Their son, 19-year old Harold was outside on the street.
Harold was confused as his sisters ran passed him, hysterical, to a doctor's house nearby.  The Daily News said "Before he could grasp the situation, police were leading his 38-year-old mother off for questioning."  Mae Elizabeth told her story matter-of-factly to the police.  The single thrust of the knife had killed Heard almost immediately.
The following Monday the Daily News began an article saying "A Queens housewife, who stabbed to death the spendthrift father of her three children Saturday, tearfully pleaded yesterday for court permission to attend his funeral."  Almost four months later, on October 1, a grand jury indicted Mae Elizabeth in the murder of her husband.
Payroll and bank robberies continued to be a threat as the decades passed.  On January 13, 1964 two gunmen entered the Broadway branch and passed a note to a teller demanding money.  They escaped with $60--a rather unsatisfying heist equaling less than $500 in today's money. 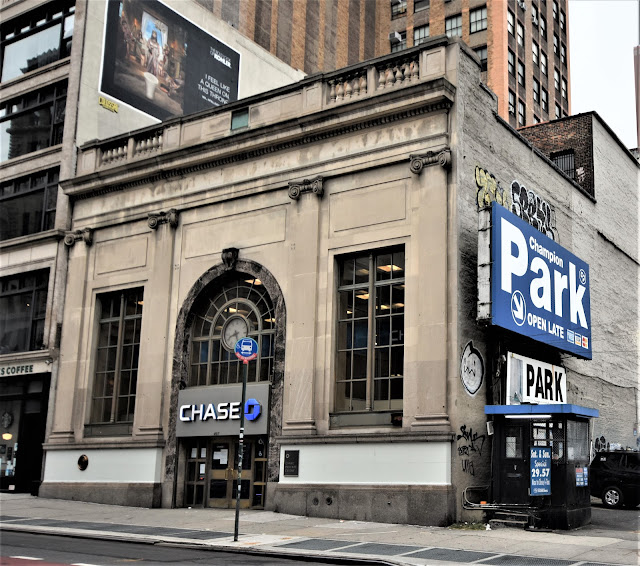 Manufacturers Trust Company became Manufacturers Hanover in 1981.  The Broadway branch was one of 14 throughout Manhattan at the time.  The name changed again in 1993 when it became Chemical Bank.  Today a Chase Bank operates from the handsome little building, which remains little changed since its opening in 1927.
photographs by the author
Posted by Tom Miller at 1:08 AM