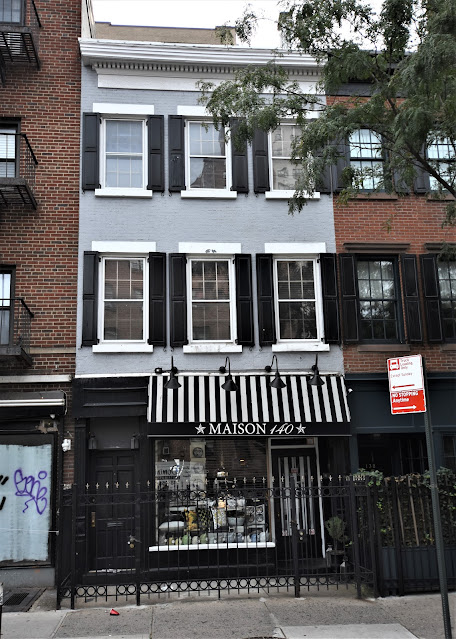 By 1853 Henry Jarvis ran his fancy goods store at No. 120 Ninth Avenue (renumbered 140 in 1868).  He and his family lived in the three story building, as well, with two boarders, Abraham Coady, a carpenter, and Sophia Heney.  Jarvis's operation apparently went beyond simply selling ribbons and cloth, he advertised in The New York Herald on May 2, 1855: "Wanted--Two apprentices to the dressmaking and millinery [trade].  Apply in the store 120 9th avenue.  None but good sewers need apply."
Jarvis moved his store out in 1856 when the entire building was offered for rent.  An ad on April 14 noted it "would be let for $450."  (It was an affordable amount, equal to about $14,000 today.)
The fancy goods store became a confectionery shop, run by a quick succession of proprietors.  It was operated by Charles Clausen in 1857 and '58, George Lamb in 1859, William Toden in 1861 and '62, and in 1864 and '65 by Henry F. Balk.
By the time Balk ran the candy store the house was owned by George W. Hyer and his wife, the former Catharine L. Gaffit,  who took in one boarder at a time.  Their tenant in the winter of 1865 was Charles F. Church who worked in the shoe factory of Henry McClellan downtown.  He went to work on Saturday, January 21, but would not return that night.
In the era before elevators freight was hoisted up through commercial buildings through hatchways--open shafts outfitted with a system of pulleys.  It was a dangerous system which resulted in repeated accidents and tragedies.  On January 23, 1865 The New York Times reported that Church "was killed on Saturday evening by falling through a hatchway on the fourth floor of No. 9 Ferry-street."  He died instantly.
George and Catharine Hyer had married in 1837.  The groom was 19-years old and the bride 17.  They had six children.   An active Mason, George earned his living as a "tooldresser."  He died on January 22, 1866 (coincidentally exactly one year and one day after his tenant had died).  He was just 49-years old.  The funeral was held in the house two days later.

Catherine lived on in the house, continuing to take in a boarder.  In 1867 it was Joseph R. Quick, a carpenter.  Around that time Cornelius B. Crist, who lived nearby on West 16th Street, was operating his butcher shop in the store.
James A. Cowie purchased the property from Catherine in 1870.  Cowie ran a fish and butcher shop on Eighth Avenue.  Born in 1844 he had "served in the Rebellion," as noted by the New York Herald, and had been a member of the Volunteer Fire Department.  As the Hyers had done, he and his wife, Margaret (known as Maggie), took in boarders.  In 1872 fireman John Vannorten lived with the couple and would remain for several years. 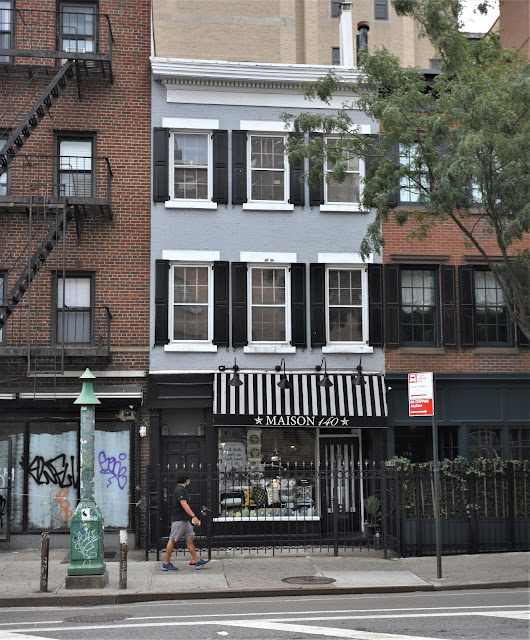 Cornelius Crist's butcher shop had become Margaret Lindsey's fancygoods store by 1872.  Margaret was a widow and unfortunately her enterprise did not succeed.  On September 25, 1873 an advertisement offered: "For Sale--Stock and Fixtures of a fancy store; three rooms; cheap rent; No. 140 Ninth avenue; will be sold cheap."
The Cowies welcomed a son, James, Jr., in the summer of 1875.  Tragically, eight months later, on December 12, his funeral was held in the house.  The following year the couple had another baby boy, this one, too, named James A. Cowie, Jr.  It may have been the presence of an infant in the house that prompted the Cowies to suddenly take in widows as their boarders.  Catharine Fyfe was here in 1876 and Margaret Corsa in 1878 and '79.  They possibly provided extra hands for the young mother.
Around 1878 Cowie moved his fish store to the shop next door, at No. 142 Ninth Avenue, while, oddly enough, leasing the store in his own building to Frank Schrader's grocery.  The ambitious Cowie had branched out by now.  He ran for political office and was elected to the assembly in 1884.
The family had a serious scare in 1891.  On July 30 The Evening World reported "The friends of ex-Alderman James A Cowie, of the Thirteenth Assembly District, were shocked this morning to learn that his life is despaired of.  They knew that Mr. Cowie was a sufferer from rheumatism, but they did not know until to-day that his malady had attacked the region of the heart, and that his attending physician holds out little hope of his recovery."  (The newspaper did not hide its partisan support of Cowie, saying he "has been the leader of the Republican opposition to wicked Fred Gibbs.")
Cowie recovered, but worse troubles for the family were on the near horizon.  In 1892 James, Jr., who was now 18, developed consumption, a condition recognized most often today as tuberculosis.  The New York Herald had an unexpected explanation for the disease, saying he was "taller than his father, who measures six feet, and the son's rapid growth had undermined his constitution."
The teen was sent to the Catskills for his health during the summer of 1893.  In the meantime Maggie fell "critically ill" as reported in the New York Herald.  James was brought home in September and confined to his bed.  His father ran again for assemblyman, but his campaign was conducted almost entirely without him as he cared for his wife and son.
The election was held on November 7.  "On election day, however, Mr. Cowie did not leave the bedside of his dying son, his brother-in-law Mr. Hyer, attending to the last details of the canvass," said a newspaper.  James A. Cowie, Jr. died that afternoon.
The well-respected James A. Cowie, Sr. lived on in the house until his death on May 2, 1897.  The New York Herald called him "one of the most conspicuous figures in the old Ninth ward and said "his bitter struggles with [Frederick S.] Gibbs are still fresh in the memories of politicians."
The quaint little house and store continued its tradition of several residents upstairs and a small business at street level.  In the 1920's it held a grocery store and in the 1940's a delicatessen.
The little building was lost to foreclosure during the Great Depression, and bought from the bank in June 1939 by Fred Cordes who paid $8,500--or about $156,000 today. 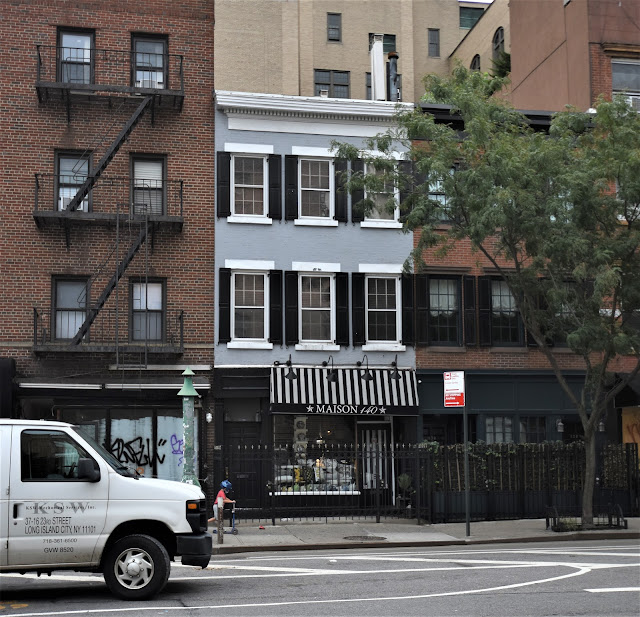 A renovation completed in 1972 resulted in a duplex apartment above the storefront.
photographs by the author
Posted by Tom Miller at 9:11 AM