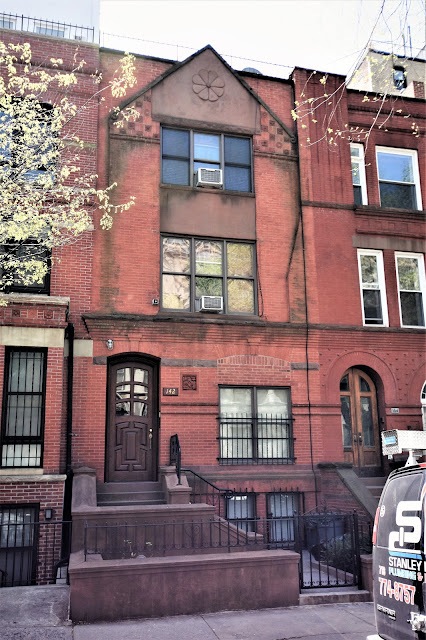 As he often did, developer William J. Merritt acted as his own architect when he planned the row of houses on the south side of West 95th Street between Columbus and Amsterdam Avenues in 1886.  And as he was also known for doing, his 18-foot wide homes, completed in 1887, were designed for upper-middle-class families.
Merritt's somewhat quirky row was designed in the up-to-date Queen Anne style.  Clad in brick with stone trim, the three-story houses did not happily co-exist, but fought one another for attention.  When The Architectural Record critic Montgomery Schuyler reviewed the row, he likened it to the "reign of terror." 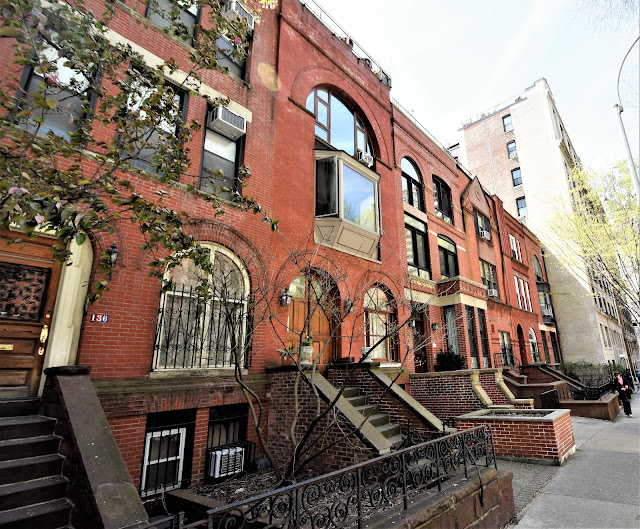 Merritt gave No. 142 a cottage-like feel.  A dog-legged stoop faced in rough cut brownstone led to the narrow double doored entrance.  Between it and the parlor window a terra cotta held an elaborate Celtic knot of leaves and bands.   Above a thin course of stone, the second and third floors rose to a faux gable decorated in checkerboard tiles.
An advertisement in the New York Herald on March 13, 1887 described the house as a "lovely Queen Anne" dwelling "decorated, papered, &c."  The advertised price was $15,000, or about $416,000 in today's money.
Merritt apparently did not find his buyer, but leased the house.  And his price dropped just a bit five years later when the owners offered it at $14,500.  On March 31, 1892 it sold (although under asking price, at $14,250) to Robert E. Walsh and his wife, Annie.
Upper-middle class families spent, if not the entire summer season, a few weeks each year at resorts.  Robert and Annie were on Fire Island at the fashionable Surf Hotel in 1894.  He was on the committee in charge of the "grand final ball" of the season that year.  On August 26 The New York Times promised "The famous old hostelry, cottages, and grounds, as well as the yachts and launches at anchor, are to be gayly decorated; Greek fire is to blaze here and there; the hotel orchestra is to be increased by several musicians from New-York, and altogether, the season is to be closed in the gayest possible fashion."

Annie's widowed mother, Amelia Morton, moved into the 95th Street house at some point.  She died there on June 5, 1899.
Robert and Annie Walsh remained in the 95th Street house for more than a decade.   On March 6, 1907 The New York Press reported that Walsh had sold it and "the buyer will occupy the house."  A month later, on April 15, an on-site auction was held of the Walsh household furnishings.  The listing hints at the couple's comfortable home environment.  Among the items to be sold were "fine mahogany and gold Parlor Furniture and Cabinets, Marbles, Bronzes and Bric-a-Brac, Oil Paintings, Etchings and Engravings, Fine Draperies and Curtains throughout the house."
Although he had announced he would occupy No. 142 as a private home, it appears the new owner operated it as a boarding house.  Living here in 1916 was Dennis Manning.  He was among the five passengers riding in Irving Farian's automobile on the New Rochelle Road near the Pelham Bay Bridge in the early hours of September 23 that year.
Given the timing, it is probably that the men had been drinking.  Farian drove the car into a telegraph pole and then into a tree.  It was a horrific accident, resulting in two men dead.  Manning was somewhat fortunate in that he was thrown from the vehicle, receiving only cuts and bruises.  Farian was held on a charge of homicide.
Colorful residents in the mid-1920's were the Rush family.  They advertised the address as the Riverside Spiritualist Church and touted young Harold Rush as "The Noted Boy Medium."  An advertisement in the Long Island Daily Press on December 14, 1927 announced "Message Services daily" at 2:30 and 8:00 p.m. and private readings every day from 2:00 through 10:00.
By 1931 No. 142 was run as a rooming house, the tenants of which were not always upstanding.  On April 21, 1931 the Standard Union reported that a taxi driver, Harry Kirschner, had picked up Vicco Anderson and Kai Wolffeld on 57th Street.  Both were tenants at No. 142 West 95th Street.
The men's behavior raised his suspicions by the time they reached Jackson Heights and he pulled over, saying he would not take them any further.  "One of the men, according to the taxi driver, pointed a gun at him and made him leave his cab after they had taken $7," said the article.  They hailed another cab and headed to the elevated train station.
Kirschner's shouts for help alerted Police Officer Patrick J. Shea  "who leaped on a private car and caught the two men after a few blocks' chase," said the Union Standard.  As Shea opened the cab door, Wolffeld's gun "was accidentally discharged" and burned his face.  Anderson was charged with having a length of rubber hose in his pocket and Wolffeld for gun possession.
As it turned out both men were sailors who, said the Daily News two weeks later "abandoned the bounding billows for paved streets and attempted to smooth their path via the gun."  Their $7 heist (about $118 today) landed both of them in prison, sentenced to two to four years each.
By mid-century the former Walsh house was neglected.  It sat vacant until being sold to Joseph Fish in June 1951.  But a new owner did not mean better days were ahead.  In the 1960's the house was appropriated by the city and in November 1967 was one of sixteen structures "designated for rehabilitation" and offered for sale. 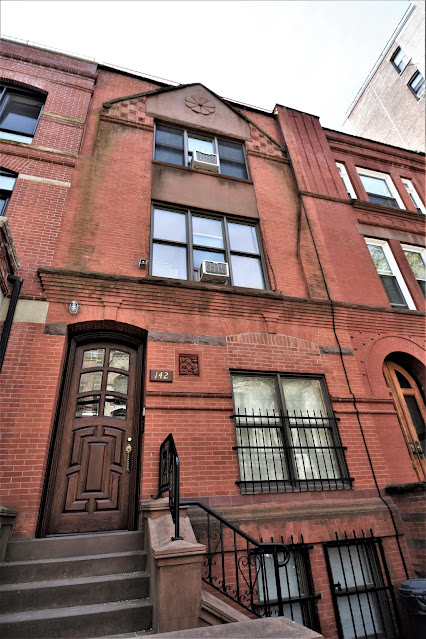 Two renovations followed, one completed in 1975 and another in 2007.  The beleaguered and missing terra cotta tiles of the top floor were replaced with a panel simulating brownstone with a daisy relief appropriate to the Queen Anne architecture.  The damaged or lost stoop was also replaced.  Today there is a total of three apartments in the building, one in the basement, and two duplexes.
photographs by the author
Posted by Tom Miller at 12:31 PM