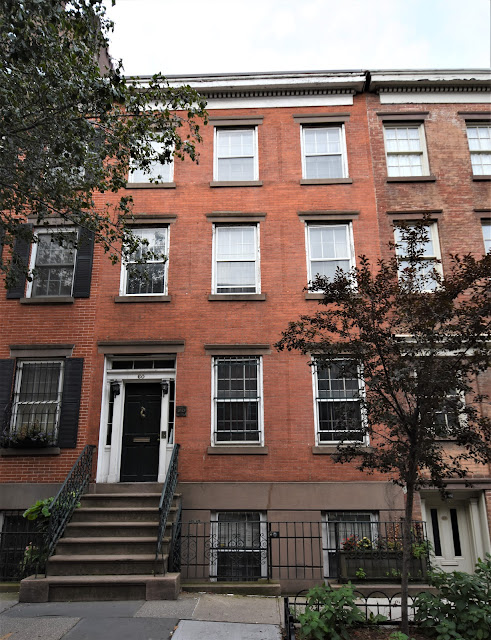 By 1850 Ellis C. Finch and his bride, the former Anna Maria Van Natter, had moved into the newly-completed house at No. 60 Horatio Street between Hudson and Greenwich Streets.  The couple did not hold the deed, however.  It was the property of Ann Maria's father, Peter Van Natter, who not only lived next door at No. 62, but had developed the plots.   A cartman, he and Cornelius Ackerman (who lived on the opposite side of the Finches) had purchased the land in 1845 and a neighborhood builder, Abraham Demarest was responsible for constructing the five Greek Revival style homes.

Three stories tall above a brownstone basement level, the homes were clad in red brick and trimmed in brownstone.  The were given simply embellishments, like the handsome sidelights and paneled transoms of the entrances.

The opposite side of the block was still undeveloped and years later The Sun recalled that when the Van Natters moved into their house "the land opposite his house was used as a cow pasture, and his wife objected to the new home because it was so far from the city."

Nevertheless the couple periodically found space for a roomer, almost always a cartman.  In 1853 Daniel H. Vanderpool roomed with the family; in 1855 and '56 it was Moss Y. Dunn.

Tragedy came to No. 60 Horatio Street on March 16, 1860.  Little Ella Clarinda (whose middle name was the same as her maternal grandmother) was two months shy of her second birthday when she died.  On the day of her funeral the house filled with member of the Odd Fellows Perseverance Lodge No. 17 of which Ellis was a member.

Thomas Jefferson Van Natter was Anna Finch's only sibling.  He lived with their parents next door.  On February 28, 1867 he married Elizabeth Onderdonk (known as Libbie).  It seems that the bride and groom were cousins.  Peter Van Natter's wife was the former Clarinda Onderdonk.  A child, Charles H., was born on March 11, 1868.

The marriage seems to have sparked a swapping of residences.  The following year Peter and Clarinda were living with the Finches at No. 60; but by 1870 Thomas and his wife joined his parents in the No. 60 and the Finches had moved to No. 62.  It was a perplexing arrangement.

Peter Van Natter was retired by now.  Born in Orange County in 1803, he and Clarinda were already married when he came to New York around 1828 at the age of 25.  They settled in Greenwich Village and never left.

Thomas Jefferson Van Natter was born on January 4, 1845.  He went by his middle name (or sometimes by T. Jefferson), and was in the coal business at No. 73 Wooster Street.  Ardently religious, for years he sat on the board of the Church Extension and Missionary Society of the Methodist Episcopal Church.

The elderly Peter Van Natter had seen enormous changes to Greenwich since the days when cows grazed across from his house.  One day in April 1891, according to The Sun, he commented to Clarinda, "I have outlived all the old Ninth warders.  I go around the streets and never see a face which was here in the old days."  A few days after making the remark Peter Van Natter died in his sleep on April 14 at the age of 88.

Losing her husband may have been too much of an emotional toll on Clarinda.  Two months later almost to the day, on June 15 she died in the house at the age of 84.  Her funeral was held in the parlor two days later.

The house was inherited jointly by Anna Finch and her brother.  Just two weeks after their mother's death Anna transferred her share of No. 60 to T. Jefferson.

He and Libbie took in a roomer by the end of the year.  An advertisement appeared in The Sun on December 15, 1891 which read:


The reasonable rent would equal about $43.50 per week today.

By the first years of the 20th century the Van Natters had moved to Brooklyn and No. 60 was being operated as a rooming house.

Michael Burke, who lived here in 1911, was affluent enough to afford a motor car.  It got him into trouble with police on June 24 that year, however, when he was fined $2 "for letting his car smoke."

The house was owned and operated by Ruth Fifer Davis by the 1920's.   She received a minor windfall in March 1925 when she inherited her mother's estate of $2,550.  The amount left her by Adaline Fifer would be equal to about $37,200 today.

Among her roomers at the time were the widowed Lorette Dumphy and her son, William.  A year earlier William was hailed as a hero in all the local newspapers.  Early on the morning of June 5, 1924, he had seen flames in a lodging house at No. 332 West 30th Street.  The Brooklyn Daily Eagle reported "Rousing 15 sleeping roomers and warming them, at the risk of his own life, that the lodging house in which they lived...was on fire, William Dumphy, 28 years old, of 60 Horatio st., was so badly cut by the ragged edges of window panes, which he smashed in with his fist, that every sinew of his wrist was severed, shortly before 7 o'clock."

Policeman Walter Rose applied a tourniquet made from the cord of his nightstick.  William received a hero's fanfare and enjoyed adulation despite his badly wounded wrist.


Lorette had a second son, James, who was three years younger than William.  He too appeared in newspapers after a fire, but for far different reasons.  On August 15, 1931 the Daily Star reported "Mrs. Lorette Dunphy [sic], 60 Horatio street, Manhattan, told police that her son started five fires in her home on Tuesday morning.  The fires were extinguished, she said, before they had an opportunity to spread and damage was comparatively slight."

Lorette, however, had no intentions of letting her firebug son go free and turned him in.  Dumphy admitted he started the fires, but said it was an accident and he "had no intention of burning the house."  He explained that he was carrying a lantern which exploded.  The resultant spray of burning kerosene set the five separate fires.  The police were unconvinced.  Detectives asserted that "they found the lantern intact" when they investigated his story.

Ruth Fifer was still renting rooms in No. 60 in 1940.  One of her tenants, Carl Chapman, prompted a headline in the Daily News on March 20 that year:  "You Figure It Out."

At 5:40 on the previous morning, a policeman happened upon the 24-year old.  The article said "He was singing.  There was a radio on his shoulder.  In his pockets were a veal cutlet, a quarter pound of butter, salt and pepper shakers, and an alarm clock set to go off at 6 A.M."  The patrolman found it "pretty puzzling" and since Chapman could not explain any of it, he was charged with disorderly conduct.  It ended happily for the cutlet-carrying young man when the judge let him off with a suspended sentence the following day.

A less understanding judge was Anna Kross.  Alfred Keating was a longshoreman  who lived in No. 60 on March 19, 1944 when he appeared before Magistrate Kross in Felony Court.  He explained that when he beat another longshoreman, Gastis Manesis, to death on March 10 it was a case of self-defense.  She ordered the 36-year old held without bail for trial.

A renovation completed in 1971 resulted in an apartment in the basement below the single family residence.  When it was placed on the market in 1991 the realtor listed three bedrooms, and six fireplaces in the main house and made special note of the "pumpkin-pine floors" in the basement apartment.  It sold for $990,000--about $1.86 million in today's money.

photographs by the author
Posted by Tom Miller at 1:57 AM