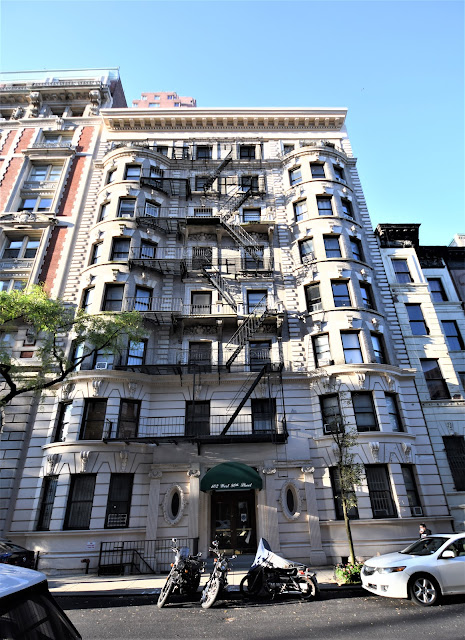 On March 1, 1899 sisters Ada E. and Mary A. Bingham purchased the single-story wooden building at No. 102 West 80th Street.  The women were active in real estate circles throughout the city.  They commissioned the Chicago architect Alfred M. Hedley to design an apartment hotel on the site.  (Hedley is perhaps best remembered for his designing of the Chicago El stations a few years earlier in anticipation of the opening of the Chicago World's Fair.)
Construction was completed on the eight-story structure in 1901.  The airiness of Hedley's Beaux Arts design was heightened by his use of white limestone and beige brick.  He avoided the overuse of ornamentation, so tempting in the style.  The entrance sat behind a columned portico which provided a stone-railed balcony to the second floor.  Two fluted pilasters (reminiscent of those used in Hedley's neo-Classical El stations) and wreath-enclosed oval windows flanked the doorway.  Rounded bays at either side rose seven stories to iron-railed balconies.  At the fourth and sixth floors were stone balconies adorned with decorative urns.
The new building was leased from the Bingham sisters for one year by the Hotel Orleans as an annex.  In 1902 the women sold the building to Lawrence and Anna R. Mead who named it the Hotel St. Pierre, a "Modern Family Hotel."  Suites were not as sprawling as in some of the residential hotels in the neighborhood.  The largest apartments had three rooms and a bath.  The residents, therefore, were upper-middle class rather than wealthy.
Among the early tenants were Augustus Linden and his wife, Emily.  The couple had been married on July 28, 1888 and Linden was now a commission merchant.
Anna Mead announced alterations in November 1906.  The Sun reported that they involved "the addition of a new story of ornamental iron to the eight story apartment hotel" and placed the cost at $9,000, or about $264,000 today.  Before she chose an architect for the project, it appears that Mead changed her mind.
The extended Stern family was living in the St. Pierre by 1908.  Although Henry Stern was retired, he still owned a significant portion of the Gibbs Tailor Parlors on West 34th Street.  He and his wife lived on the second floor and their son, Henry Sidney Stern, and his wife lived on the floor above them.
Early in 1909 the Gibbs Tailor Parlors were experiencing business troubles.  The problem weighed so heavily on Henry Stern's mind that his wife convinced him that they should go to Europe for the summer to get away.  Preparations for the trip were being made in March.
After having lunch with her husband on March 28 Mrs. Stern went to call on friends in Harlem.  They agreed that if she had not returned by early evening, she would call and he would meet her at their friends' home.  At 6:00 she called the St. Pierre and asked to be connected to the apartment.  The Sun reported "The boy rang the Stern telephone several times and reported that there was no answer."
Mrs. Stern was positive her husband would not have left and finally instructed the boy to use a passkey and wake him since he must have fallen asleep.  The Sun noted "His family had noted a somewhat morose condition on the part of Mr. Stern for some time, and it is more than possible that his wife was considerably alarmed when he failed to answer the telephone.  However, she said nothing to the telephone operator about that at the time."
Walter Pondon obtained the passkey from Lawrence Mead and went up to the Stern apartment.  "He immediately returned frightened to Mr. Meade [sic] and the manager went back to the apartments with him.  They found Mr. Stern undressed in the bath room lying in the tub, which was partly filled with water.  The water came up about to the man's mouth, and in his mouth was a gas tube which had been detached from a small stove and attached to the gas jet."
Shortly after the incident the Meads leased the property to Minnie L. Anderson as proprietress and manager.  She renamed it the Hotel Anderson.  Among her changes was the acceptance of transient guests.  An advertisement in the Fall River Line Journal in 1912 listed a single room and bath, including meals, at $2.50 per day.  The largest suites, containing a parlor, two bedroom and bath with meals could be had for $2.50 per day, or about $68 in today's dollars.
The ad touted, "Ladies traveling alone and families wishing a quiet inexpensive place will find this a very desirable refined hotel; conveniently located between Central Park and Riverside Drive."  Minnie Anderson's sister, Flory, was involved in the operation, the advertisement noting that the proprietors were "The Misses Anderson." 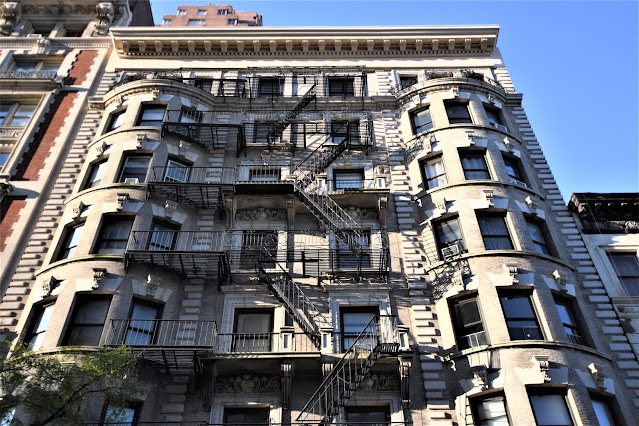 In 1947 a renovation resulted in nine apartments and an office on the ground floor and eight apartments on each of the upper floors.  At some point the striking stone balcony railings and the dignified portico were removed, possibly in an effort at modernizing the building's appearance.
photographs by the author
Posted by Tom Miller at 11:16 AM