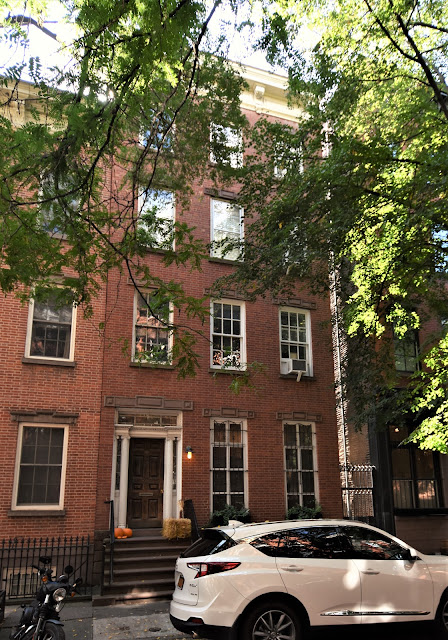 Hammond Street was named for Elijah Hammond who owned the owner of the 55-acre estate near the village of Greenwich.   By the 1820's Hammond's once bucolic summer estate was seeing the incursion of houses and shops and Greenwich Village expanded.  In 1828 Lavinius C. Heroy, a sashmaker, completed a handsome two-and-a-half story home for his family at No. 56 Hammond Street (later renumbered 262 West 11th Street).  The 21-foot wide house sat on a 25-foot lot, allowing space for a narrow passageway, or horsewalk, to the rear yard.  Faced in red Flemish bond brick, it sat upon a brownstone English basement.  The width of the home and the additional money Heroy expended on architectural details like the lushly detailed entranceway, spoke of his comfortable financial status.

Heroy and his wife, the former Caroline Morey, had one son, James Henry.  Following Lavinius's death around 1833, Caroline took in boarders.  In 1834 George L. Mankin, an accountant, and attorney Roger Strong lived in the house.  The following year Caroline moved to Wooster Street, while leasing the house to merchant Edbert Smith.
Caroline's tenant in 1838 advertised for boarders, as well.  An advertisement in the Morning Herald on April 11 read:
Boarding--A small private family occupying a modern built two story brick house in Hammond st. is desirous of obtaining a gentleman and his wife as permanent boarders from the first of May next.  The terms will be moderate.
The family of William Underdunk lived in the house in 1845.  He ran a grocery business at 114 Broadway Street, while Henry Jr. was listed as "student."
By now John Henry Heroy was a partner in the plate glass business of Heroy, Struthers & Co.  In 1846 he attempted to sell the family home, listing it as "A two story brick house and lot, No. 56 Hammond-st. between Fourth and Bleecker sts. in the vicinity of two or more stage routes, and in every respect a desirable residence."  Heroy either had no takers, or he simply changed his mind, because by 1850 he was again living in his childhood home.
In 1853 Heroy was again leasing the house, this time to William P. Bensel, a cooper (or barrel-maker) whose business was on Washington Street.  The Bensels had small children, as reflected in a help-wanted advertisement on October 11, 1853:
Girl Wanted--A neat, clean and tidy girl, to assist in taking care of children and to do plain sewing; a Protestant of any country preferred; none need apply without good recommendations.
Whoever was hired lasted for nearly three years.  Then, on February 27, 1856 another ad appeared:
Girl Wanted--American, Scotch or English, to assist in taking care of children and to make herself generally useful; must be a good plain sewer, neat and tidy and of good disposition.  One with the above qualifications will find a good home.
The Bensel family remained until 1859 when the house was offered for sale again.  Listed at $7,500 (about $238,000 today), it offered "gas, hot and cold water, bath, &c; range and portable furnace.  Everything in perfect order."
A succession of residents came and went, no doubt renting rooms, until 1867 when James Snodgrass and his family moved in.  Snodgrass ran a lumber yard on Tenth Avenue at the corner of 15th Street.  He and his wife, Annie, had a grown son, James, Jr.  James lived with them and worked in his father's business.
It was most likely Snodgrass who enlarged the house to four stories, adding an up-to-date Italianate cornice and stoop ironwork, and floor-to-ceiling parlor windows in the same style.  (The Landmarks Preservation Commission dates the work to a 1920 renovation; however the Italianate style of the changes challenges that theory.)
Around 1872 Snodgrass retired and closed his lumber operation while continuing to invest in Greenwich Village property.  That year James Jr. went into the bedding business.  By now he was married and he and his bride, Annie, continued to live with his parents in the West 11th Street house.
On October 12, 1872 The Yonkers Gazette reported "Mr. and Mrs. James Snodgrass, jr., have left Yonkers, where they have been spending the summer, and taken up their residence in West 11th street, New York."  In 1873 James Jr. changed professions again, partnering in the hay and feed firm of Gleason & Snodgrass.
The extended family went to Yonkers in the winter of 1879.  On February 1 The Yonkers Gazette reported "James Snodgrass and family, of New York, have been visiting Yonkers relatives on Warburton avenue."  It may have been James Sr.'s last trip to the country.  In 1880 Eliza was listed as his widow.
James Jr. inherited the house and properties on Bleecker Street, Perry Street and Ninth Avenue.  The combined properties were valued at $25,000, or in the neighborhood of $645,000 in today's money.  He and his partner in the hay and feed business had parted ways two years earlier and he was now operating Gleason & Snodgrass on his own.
In 1891 neighbors realized that some of their mail was being stolen, almost all of which included cash or checks.   Post Office inspectors devised a plan and recruited Annie Snodgrass as an accomplice.  They mailed a "decoy letter...which contained four marked $1 bills," according to The Flagstaff, Arizona newspaper The Coconino Sun, to Annie.  The letter carrier was caught with the envelope in his pocket.  The article said he "was about to start on his vacation and had $202 in bills and $25 in a postal check on his person."  His vacation was cancelled as he waited in jail for the grand jury's verdict.
At the time the Snodgrass family had more to worry about than missing mail.  Gleason & Snodgrass was in serious financial trouble and in 1890 James had begun liquidating the property his father had left him.  It was to no avail and on May 22, 1891 the business crumbled.
The West 11th Street house that had been the family's home for nearly a quarter of a century now became home to the Nicholas D. H. Clark family.  Clark was a "superintendent of Post Office Station," with a salary in 1894 of $2,000--or just over $61,000 today.  He was as well a sexton of the First Presbyterian Church on Fifth Avenue. 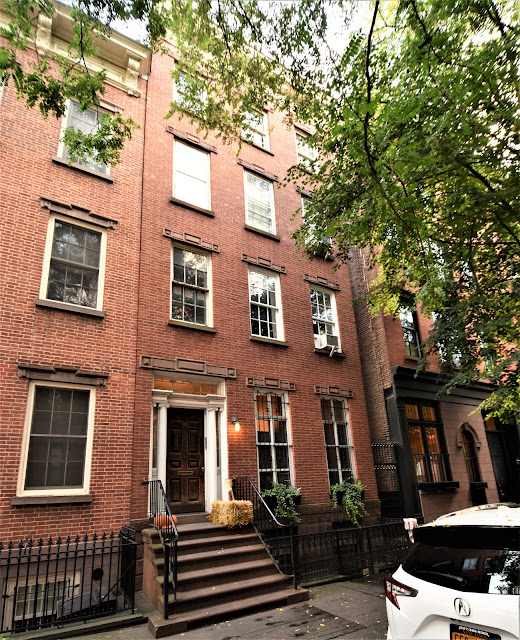 Clark died in 1901.  Afterward the West 11th Street house was operated as a high-end rooming or boarding house.  Living here in 1906 were Lawrence University alumnus Gunluf Guthormsen, Assistant Municipal Civil Engineer Michael J. O'Neill, and author Matilda Shaw.
Matilda had come from France in 1905 with her husband, G. A. Shaw who was hired by The Herald.  She had written several French books including La Frontiere and Illustres et Inconnus.  According to the New-York Tribune, "They soon separated, according to Mrs. Shaw's landlady, and the husband went to live with a stepson, L. Victor Fleckles."
In 1908 Shaw died and Matilda learned that he had "fallen heir to about $100,000 by the death of Scotch relatives," according to a newspaper.  The feisty author determined to go to Scotland in May 1909 to claim the money.   But she would not get the chance.
Around mid-March Matilda fell ill with "the grip," the term for a form of influenza.  It lingered for two weeks and then, on April 3, 1909, the New-York Tribune reported "Mrs. Matilda Shaw, a teacher of French and author of French books, and said to have been a cousin of Sarah Bernhardt, the actress, died alone yesterday in a locked room at No. 262 West 11th street, where she lived."  When her landlady could get no response from her, she called Matilda's doctor, Faxton E. Gardner, who forced open the locked door.  "He found that she had been dead several hours," said the New-York Tribune.
Inside the room were mementos from a well-lived life.  There were "several photographs of Sarah Bernhardt, all autographed, and a letter from President Theodore Roosevelt.  It read:
My Dear Madam--I shall read "La Frontiere" with very real interest.  Pray present M. Claretie with my best regards and with many thanks, believe, me, sincerely yours,
Theodore Roosevelt
Roosevelt made reference to Jules Claretie, the French Minister of Education and a close friend of Matilda.
In 1920 No. 262 received a considerable renovation to an apartment building with five units.  It was at this time that the Federal style paneled lintels of the lower two floor were copied at the upper floors.  The architect who was so careful to precisely match the Federal detailing would not have made the mistake of adding disparate Italianate ironwork and cornice.
Well-known Greenwich Village real estate operator Vincent Pepe purchased the renovated building on January 25, 1922.  He placed it on the market four days later for $36,000, noting "occupied by 5 tenants; all modern improvements; rents $7,380 yearly.
A subsequent renovation in 2004 resulted in three apartments.  The Heroy house is beautifully maintained and several of the interior details from the 1860's update--some of the marble mantels, for instance--survive. 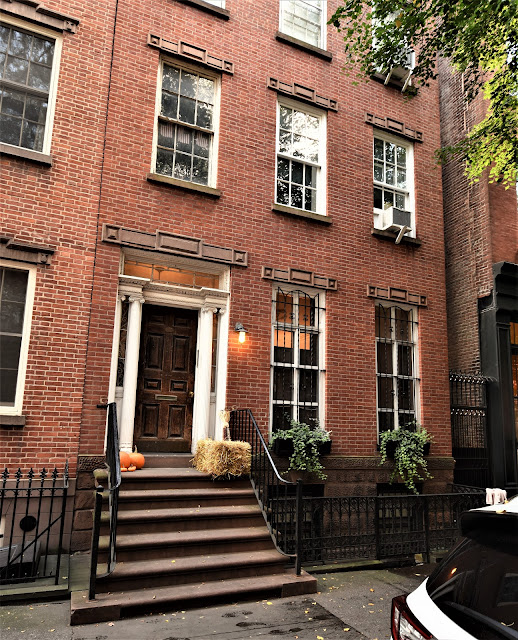 photographs by the author
Posted by Tom Miller at 1:27 AM