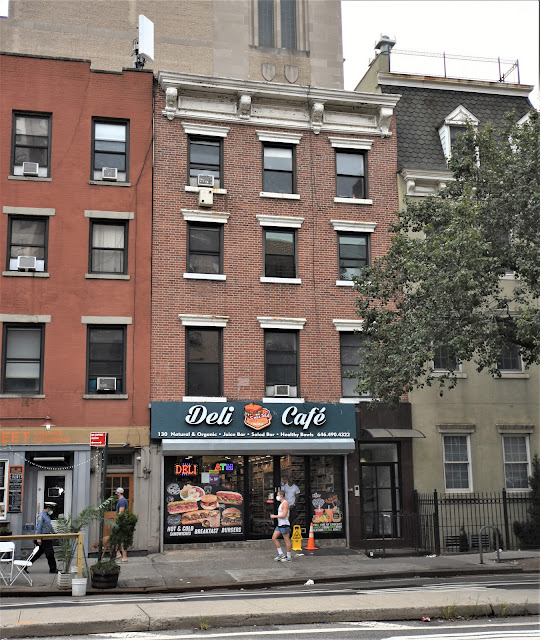 In 1852 Amos Brand and his family lived above the George Cranna's lamp wick store at No. 110 Ninth Avenue (renumbered 130 in 1868).  A butcher, his own store was only a block away at No. 78 Ninth Avenue.  Within the year Cranna, who operated a second store on Eighth Avenue, moved into the upper portion of the house.  His wife, Isabella, had died seven years earlier at just 35-years old and he rented an unneeded room to Joseph Street, a staircase maker.
George Cranna expanded his kerosene and lamp wicks business by adding china by 1855, and now called his shop "George Cranna Crockery."  The venture may have been overly optimistic, however.  In the spring of 1857 he had what today would be called a going out of business sale, and on April 16 an auction of the remainder of stock was held.  The announcement of the sale of "crockery, glass and china" noted that "the balance of the stock contained in the store, consisting of fluid and oil, cans, measures, &c, &c, must positively be sold this day."
Cranna moved his business to West 25th Street where he returned to selling what he knew best--"lampwicks."  The upper floors of No. 110 were now operated as a boarding house.  Cranna's former store became the Chelsea Market, a butcher store run by Henry Ford.  As Thanksgiving neared in 1861, an advertisement appeared in the New York Herald which read:
Thanksgiving Poultry--Live or dressed, from 8 to 10 cents per pound; premium Beef, corn fed, Pork, fresh and salt, from 6 to 9 cents; Mutton from 5 to 7 cents, at the Chelsea Market.
The tenants--including Henry Ford--would have to find new accommodations after March 12, 1863 when the building was sold and the contents auctioned.  The boarders had enjoyed a piano and two sewing machines.  Included in the sale were "the contents of the Butcher's Store, fixtures, marble slabs, desks, racks, blocks, &c., worthy the attention of the trade and others."
The building was purchased by Albert and Emma Hyland who ran a provisions store on West 18th Street.  (A provisions store sold household items like buckets, detergents, cups, and food as opposed to a grocery store which sold only flour, sugar, produce and such.)  They leased the ground floor to Landeline Stortz who opened his beer saloon in the space.
The Hylands took in blue collar boarders.  In 1864 and '65 two Irish stonecutters, William Murphy and Dennis Sullivan lived in the house.
Landeline Stortz was required to appear before the Board of Excise on July 11, 1867 after a "Mrs. Clancy" complained that he sold her husband liquor after she had instructed him not to.  The New York Herald reported that Board dismissed the case.
Stortz personally ran the saloon at least through 1873.  He subleased it briefly afterward to Daniel Orth and in 1878 to Jacob Hoehn.  The upper floors continued to accept boarders.  Most were still Irish immigrants, like roofer James C. Morison and Thomas Clark, a policeman, here for several years in the late 1870's. 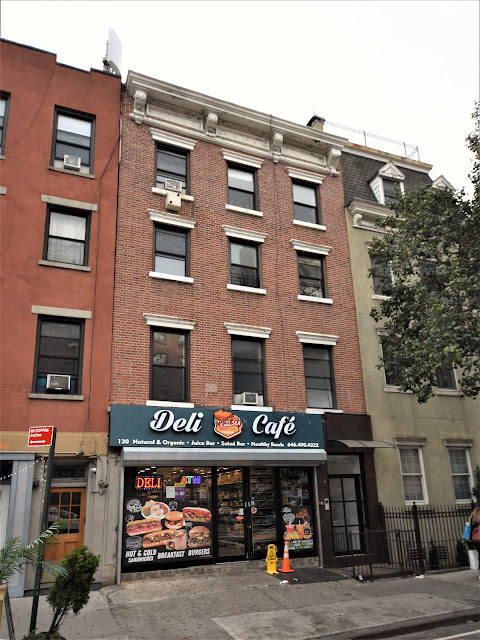 The saloon was outfitted with a kitchen so patrons could also have food with their beer.  Jacob Hoehn continued to run it until 1892 when the J. C. G. Hupfel Co. signed a lease on the space.
The Hupfel Co.'s saloonkeeper was Peter J. Grieshaber.  On September 30, 1893 16-year old Frederick Diedrich arrived in New York from Germany and was given a job in the saloon that same day.   Ten days later Grieshaber was horrified when he saw blotches on the boy's face and hands.
The Sun reported that the saloonkeeper "kicked up a row last night by dragging a sixteen-year-old boy through the streets whom he said had small-pox.  A crowd gathered about him in  Ninth avenue and some one asked him what the boy had done."
"Get away!" he warned, "this boy has the small pox."
The article recounted "Then there was a small stampede, but a new crowd soon gathered, who saw the saloon keeper take the boy into the West Twentieth street police station."  The sergeant there was irate with Grishaber, asking why he brought a person with a contagious disease into the station house instead of calling a doctor.  Frederick was locked in a cell and a doctor summoned.
Dr. Benedict examined the boy and "pronounced it an aggravated case of dirt, and prescribed a liberal application of soap and water."  Grieshaber admitted "the boy persistently refused to wash."  Both were sent back to the Ninth Avenue saloon, but not before the sergeant gave Grieshaber one more "sharp reprimand."
When the three-year lease expired Robert B. and Maria Roubaud took over the business.  The couple lived in rooms in the rear of the saloon.  At the time Robert had been battling an ongoing medical condition.  He had had an unsuccessful operation and in January 1896 was told he needed another.  The Standard Union reported "The result, he was told, would be doubtful."
The despondent man placed a 32-calibre revolver to his temple in the back room just before midnight on February 10.  He was still clinging to life when he was taken to New York Hospital.
Brewer Peter Doelger took over the operation of the saloon in 1898, while Peter Kilmurry signed a lease for the upper portion of the house that year.  It was still home to Irish-born residents like John Conway.
Prohibition put an end to the saloon in No. 130 Ninth Avenue.  The store became home to the Building Maintenance Supply Co.  Contractors and apartment building owners purchased varnish, paints and accessories here for years. 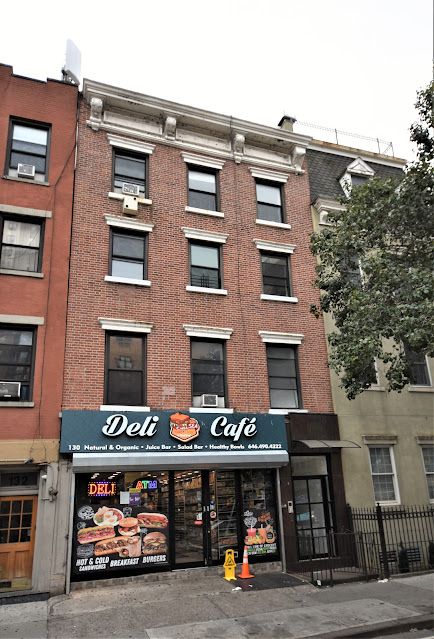 In 1991 a renovation was done to accommodate a delicatessen in the former saloon space.  There were now four apartments upstairs.  Other than the remodeled ground floor, the Italianate style appearance of the building is little changed after over a century and a half.
photographs by the author
Posted by Tom Miller at 7:03 AM