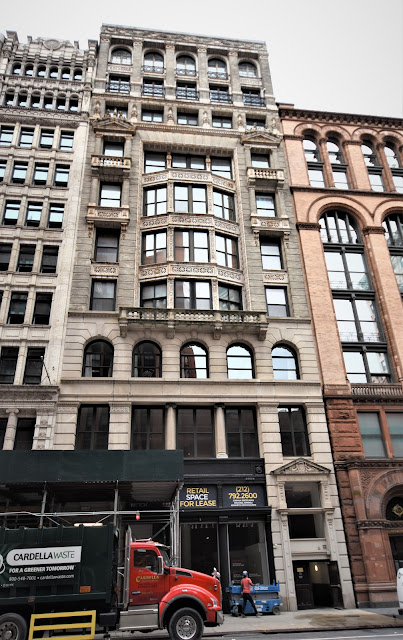 In the early 1830's the neighborhood of Broadway and West 4th Streets was exclusively residential.  Handsome Federal-style mansions lined Broadway, Lafayette Place and the adjoining side streets.  In 1833 Samuel L. Gouveneur, the City Postmaster, lived at No. 704 Broadway.
That all changed over the next 60 years as this section of Broadway became a major commercial thoroughfare.  In 1894 developer Adolf Boskowitz  added his mark by beginning construction on a 10-story store and loft building.  The plans filed by the architectural firm of De Lemos & Cordes in January placed the cost of construction at $150,000--or about $4.6 million in today's money.
Completed in 1895, the Boskowitz Building was faced in gray brick above a rusticated limestone base and trimmed in terra-cotta.  Its Renaissance Revival design featured a four story mid-section embellished with a pseudo balcony with stone balustrades which upheld a three floor angled bay, pretend Renaissance balconies at the sixth and seventh floors, and, most impressive, magnificent nude sculptures which recline, Michelangelo-like, atop the seventh floor pediments.

Originally an ornate cornice sat above the swag molding above the tenth floor.
This section of Broadway was the center of the apparel and millinery industry.  Among the early tenants of the Boskowitz Building was Simon Ross & Sons, clothing manufacturers.   The firm was the target of a burglar in June 1896 who was brazen enough to return two weeks later.  He got away with a total of $1,000 worth of men's clothing--a heist equal to about $31,500 today.
On July 17 Detective Larkin were tipped off that a tailor, Joseph Stern, "was offering some phenomenal bargains in clothing," according to The Standard Union.  Larkin quietly investigated and discovered that buttons on the clothing bore the stamp of Simon Ross & Sons.  He came back to the store with a member of Simon Ross & Sons, who identified the goods as the stolen merchandise.
Stern was arrested and testified in court that he had purchased the goods from a clothing salesman, August Von Farnish.  The 24-year-old was arrested and his criminal career came to an end.  He refused to give any information at all, including his name, prompting the police to call him "The Silent Burglar."  But a letter in his pocket identified him and provided a home address.  There police found "a complete set of burglar tools and a bunch of keys.  They also found some of the stolen clothing," said The Standard Union.  Joseph Stern was released and he returned all the unsold property to Simon Ross & Sons. 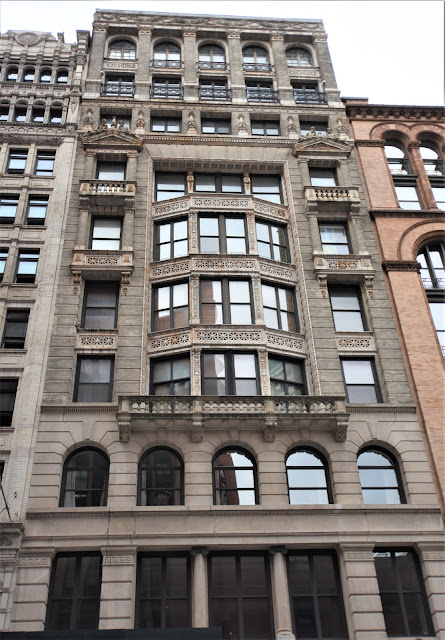 On July 16, 1926 security agents from a protective firm received an alarm from the fourth floor shop of J. Friedman & Co.  They arrived at the premises and found nothing disturbed.  The New York Evening Post reported that they were "about to leave when a gnawing sound was heard from the south wall."  The security officers went to the building next door to investigate.  They made enough noise that the would-be burglars who were trying to burrow a hole through the wall had time to escape.  They left behind "an acetylene torch, three jimmies and fourteen drills."  They not failed in the burglary attempt, but lost expensive burglary tools after all their hard work.
The Great Depression struck a major blow to the owners of the building.  And when the Emigrant Industrial Savings Bank foreclosed in April 1933 the 704-706 Broadway Corporation presented what The Daily Record termed "a novel defense."  The firm's attorneys told the judge that in the depressed real estate climate renting space was nearly impossible, making paying the mortgage equally difficult.  Therefore, the defense, held, the bank should pay them an equitable fair-market price for the property, rather than simply seize it.
At some point around mid-century the cornice was lost, leaving the Boskowitz Building looking a bit unfinished.
In the third quarter of the 20th century the Broadway area around New York University had earned the nickname LoBro (one that did not pass the test of time).  Former storefronts became buzzing nightspots.  On September 20, 1985 The New York Times columnist Michael Gross explained "LoBro borders NoHo, SoHo, and Little Italy.  It is north of Chinatown and the Financial District, southeast of the West Village and N.Y.U. and southwest of the East Village."  He said it was an area where "the more clearly defined neighborhoods surrounding it meet and let their differences blur."
As an example he pointed to Bayamo's restaurant and bar, in the Boskowitz Building.  Here "three young businessmen doffed their jackets, loosened their ties and collars and checked out a bottle blond in a periwinkle blue jumpsuit and a college woman in a brown dirndl, white blouse and medal-laden vest.  A young man with punk-style blue-black hair strolled past.  Cross-cultural minglings such as this are common in this uncommon neighborhood."
Bayamo's, which served Cuban-Chinese food, was a hot spot for a decade before The New York Times food critic Florence Fabricant reported on April 17, 1996, "Bayamo...is about to become a brewery.  It may be the only established restaurant to add a brewery to its operation."  One of the owners, Stewart Rosen, told her,  "it's time for more sophisticated food to go with beer.  And the food we serve is perfect."
In the early 1990's the Manhattan Center for Living was in the building.  The organization staged events to benefit AIDS victims.
A renovation was begun in 1996 by architect Arpad Baska.  The two-year project resulted in artists lofts and a three-story, 11,000 square foot penthouse.  An article in the Daily News on May 17, 2007 said "If you're really rolling in it, you could buy the expansive triplex penthouse at 704 Broadway.  It comes with a private rooftop pool and teak sundeck."  The apartment was marketed at $18.75 million.
It was purchased for a bit less--$17 million--by California supermarket mogul Ron Burkle.  In reporting the sale Deepa Thukral wrote in Luxury Launches, "this house was quite a star in its own right.  It was featured in a few episodes of the much watched Sex and the City as the bachelor pad of Samantha Jones's boyfriend [and] also master comedian Jerry Seinfeld married his wife, Jessica Klar, in the venue."
De Lemos & Cordes's handsome loft building survives--albeit without its cornice--greatly intact.  And sadly, the wonderful Renaissance-style sculptures are mostly ignored by busy passersby.
photographs by the author
Posted by Tom Miller at 1:13 AM