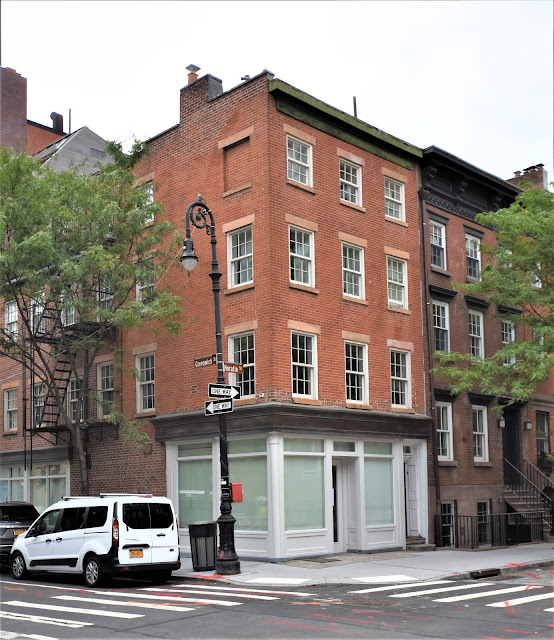 Although he was a British soldier, at the outbreak of war in May 1775 Horatio Gates traveled from his estate in Virginia to Mount Vernon to offer his services to George Washington.  He became a leading American general during the early years of the Revolutionary War.  Following the conflict he returned to his estate, Traveller's Rest in 1784.  Six years later he freed his slaves and relocated to New York City.  General Gates died in 1806 and Horatio Street was named in his honor.

Until 1847 blindmaker Harvey Springsteen's house and shop were located at No. 150 Amos Street (later West 10th Street).  That year he had a new house and shop erected for him at the northeast corner of Horatio and Greenwich Street.  Faced in red brick and trimmed in brownstone, it was completed in 1848.  The Greek Revival style house was the first to be erected on the block.  Originally numbered 75 Horatio, it would later take the address of 59.  In the rear yard was Springsteen's blind shop at No. 835 Greenwich Street.

Springsteen had married Rachel Ann Straut on September 29, 1838.  His bride was 21-years old.  Tragically, on November 29, 1848, shortly after moving into their new home, Rachel died.

Springsteen soon shared the ample house with William L. Knowles, a clerk, and his wife Eliza.  The couple was listed here by 1852.

That same year trouble came to Springsteen.  On May 12, 1852 The New York Herald reported "Officer Westlake...on Monday arrested a man named Harvey Springsteen, at his residence, corner of Horatio and Greenwich streets."  While he was still operating his blind making shop in the rear building, Springsteen had taken on a second job as a receiving agent for the Erie Railroad Company.  That firm's auditor discovered a shortage of $500 during the past year--a significant $17,300 in today's money.

Springsteen continued to list his blind shop at No. 835 Greenwich Street; but his name no longer appeared in city directories in the main house.

It is unclear whether the William Knowles leased the house or purchased it from Springsteen; however he and Eliza continued to reside there.  They had a boarder, James W. Poe, also a clerk, who lived in the house in 1855.

William died before 1859, but Eliza stayed on until 1862 when the house became home to the Jennings family.  James H. Jennings and his wife had two sons, James, Jr. and Frank.  Like William Knowles, Jennings made his living as a clerk.  He worked in the St. Charles Hotel at No. 648 Broadway.

The younger James was in the South fighting for the Union that year.  The New York Times published his name on the list of soldiers wounded in battle on September 23, 1862.  The young man had been shot in the arm.

Ironically, James Jennings, Jr. survived the war, but died in a bizarre accident at home on August 14, 1869.  Stifling summer heat made sleep nearly impossible on the worst nights.  To find relief the 22-year old went to the roof of the Horatio Street house.  Somehow he toppled to the ground and was killed.

It appears that Frank Jennings, too, tried to get some sleep in the night air six years later.  The New York Times said he was "dozing on his front stoop" on June 16, 1875 when he "was robbed of a pawn-ticket representing a gold watch worth $60, and a gold stud worth $2.  He awoke just as the thieves had completed their work, and got a good view of them as they escaped."

The following morning Jennings went to the pawn shop at No. 496 Hudson Street to put a stop on the ticket.  He walked in the door to find the two crooks in the process of redeeming the watch.  When they saw Jennings, they fled.  A policeman overtook John Moore nearby.  In his pocket was Jennings's gold stud.

About the same time Police Captain Kennedy was walking along Christopher Street when a woman told him that a man had just jumped over her backyard fence and was hiding in the yard.  "After a sharp struggle" Peter McGibney was arrested.   Frank Jennings positively identified both men.

James H. Jennings died at the age of 64 on September 23, 1881.  His funeral was held in the Horatio Street house two days later.

The property was owned by J. L. Peyton by 1890.  It was around that time that the ground floor was converted to a store and a brick extension erected on the site of the old blind shop.  An advertisement on April 24, 1891 offered "Corner Store, 59 Horatio st, and 825 Greenwich st; handsome plate glass front; first class stand for a grocer or butcher, fish or vegetable market; rent only $600 per year.  Apply to J. L. Peyton, owner, 156 West 14th st."

Peyton operated No. 59 as a boarding house; but he never appears to have had more than three tenants.  Living here in 1891 were Alexander Tacker and John P. Willis, both of whom worked as clerks.  The house saw a rapid turnover in tenants.  In 1894 Robert J. Perry, bartender, and Edward J. O'Hara, a "bottler" were listed here.  O'Hara was here the following year, now sharing the house with Thomas J. Brennan, who was in the ice business, and another clerk, Robert J. Perry.

The store was home to Cornelius B. Jennings grocery store by 1897.  He lived nearby at No. 72 Jane Street.  Upstairs were Harry E. Platt, a painter, and Ignatz Timberger, who worked as a chair caner.

James Meehan soon moved in.  The Irishman was drinking in a saloon at Grove and Bleecker Streets on April 29, 1898 when John R. Harper walked in.  The soldier was wearing the uniform of the Lafayette Brigade.  Assuming Harper was Irish as well (he was born in Scotland) Meehan was oddly offended.  He shouted "You would be better employed recruiting soldiers to free Ireland than Cuba.  You are a traitor!"

Harper, who had simply wanted a drink, protested and, according to him, "Meehan struck him with a beer glass on the head, laying the scalp open."  The New York Herald reported "A loaded revolver was found on Meehan.  Magistrate Olmstead held him in $300 bail for trail."  It was a significant amount--more than $9,500 today.

Cornelius B. Jennings moved his store to Bethune Street in 1905.  The grocery store was taken over by Thomas Tierney who was still listed at the address as late as 1918.

The store was burglarized in the summer of 1927.  When the culprit was caught, his identity was shocking.   On August 29 The Brooklyn Standard Union reported "Patrolman John Condon, of Traffic A, was charged with breaking into a store at 59 Horatio street."

The cop had an inside accomplice, 22-year old store clerk Andrew Montague.  Condon made off with the cash register on August 27, but both men were arrested the same day.  It appears that Condon had been a bad apple within the department for some time.  According to the Daily News he had been with the force three years and "has had 15 complaints made against him."

The property was sold in April 1946.  The New York Sun reported that the buyer "will modernize the building."  The renovation, completed in 1948, resulted in two apartments on the second and third floors, and one on the fourth.

The third quarter of the 20th century saw Hornblowers on Horatio in the ground floor.  The popular eatery featured American cuisine and was a familiar fixture in the neighborhood.


The restaurant made way for Astray Cafe in 1985.  On November 22 that year the Daily News called it "a tiny dining place off the beaten path...It's a cozy, casual, 32-seat place with brick and mirrored walls, and nouvelle American cuisine."  A three course dinner there averaged about $47.50 by today's standards. 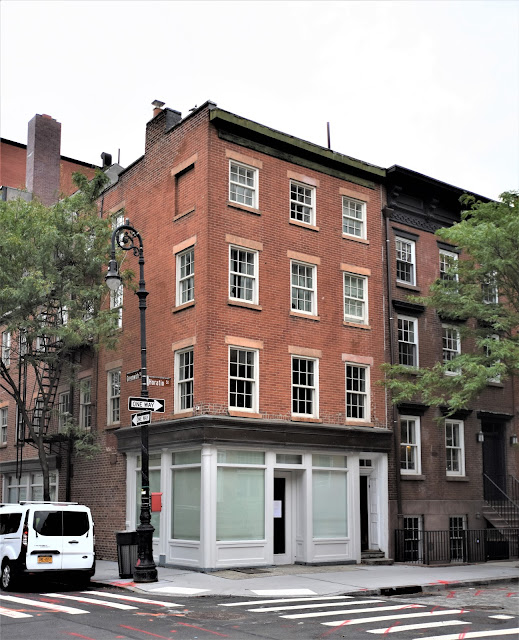 As the Greenwich Village neighborhood became increasingly affluent, a renovation completed in 2001 resulted in a single family home above the store.  In 2008 it was divided into two residences.

photographs by the author
Posted by Tom Miller at 9:57 AM