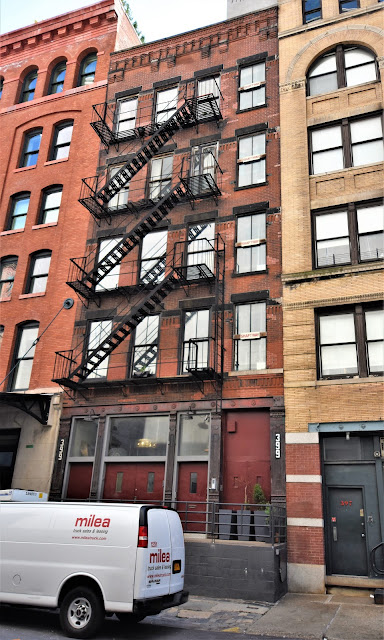 Born in Baden, Germany in 1844, Max Ams came to New York in 1866.  Two years later he organized a fruit canning and packing firm, the Max Ams Preserving Company.  By the early 1880's he was highly successful and operated what J. P. Zavalla in his 1916 The Canning of Fruits and Vegetables called "a very large export business of American food products."

On January 4, 1882 he purchased the 25 by 80 foot property at No. 399 Washington Street for $7,800.  Six years later he erected a five-story structure on the site, designed by William Graul.  Although a few early documents described the finished building as a stable, the loading platform which raised the first floor above street level, creating a loading dock, proves it was always  a loft and store building.

The cast iron base was simple yet attractive.  Rosettes covered the bolt heads along the otherwise unadorned exposed lintel.  Graul's neo-Grec design for the red brick upper stories included bricks standing on end to suggest capitals to the piers and rough-cut granite lintels and bandcourses.  The complex corbel table and cornice were executed entirely in brick.

It appears that Ams erected the building originally as an investment--one that did not work out.  On January 4, 1890 he bought back the "five-story brick factory" building in foreclosure for $21,000 (nearly $585,000 today).  It is unclear exactly what Ams used the Washington Street building for; although it was most likely for warehousing and shipping.  His operation was spread among several buildings in the neighborhood by now, including his Greenwich Street headquarters and two five-story buildings on North Moore Street.

Among the products most likely warehoused in the Washington Street building were crates of jam and canned vegetables.  Ams' son, Charles, was a chemist and in 1888 had taken up the problem of hermetically sealing cans.  Up to now cans were hand-sealed with solder.  J. P. Zavalla wrote "There were almost as many leaky cans as there were perfect ones and the loss through these was enormous."

Charles perfected the metal can still used today, which he called "the sanitary can."  He and his father established another company, the Max Ams Machine Company, to manufacture the cans as well as the canning equipment.

The same year that Charles started work on the sealing problem, his father helped form the American Fruit Preserving Association with six other jam makers.  Within the decade it controlled 80 percent of the business and had earned the nickname "The Jam Trust."  It was brought down by a young boy.

On March 3, 1892 four complainants, including one very youthful investor, filed a petition saying they had bought stock "without compete knowledge of the nature of the concern."  That prompted an investigation.  The following year, on June 15, The Evening World reported "The small boy has won a great victory.  A Chicago Judge on Tuesday decided that the American Fruit Preserving Association, commonly known as the 'Jam Trust,' is as unconstitutional as some of its preserves."

By the turn of the century Max Ams had a vast personal fortune and lived in an upscale home in Westchester County.  His broad-flung interests included the presidency of the Mauser Manufacturing Company (a silver company headquarters in Mount Vernon near his home), the Max Ams Beef and Fish Company, and directorships in the American Encaustic Tiling Company and the Riverside Bank.

With failing health Ams retired in 1907.  The New-York Tribune explained "his physicians [had] told him that he could not recover."  Charles took over control of the Max Ams Machine Company and the Max Ams Preserving Company.  A year later, on September 5, 1908, Max Ams died.

Charles' aggressive business sense prompted him to purchase the entire town of Turnerville, Connecticut in October 1912.  The Sun reported it had been bought "outright by Max Ams, who makes jams at Mount Vernon, N.Y.  Turnerville is not much of a place except that included within its boundaries are about 2,000 acres of land."  Charles, according to the article, had not announced his plans, "but it has been stated that he may remove his manufacturing establishment there."

And so he did.  He changed the town's name to Amston and erected two factories, a large house and 50 tenements for the factory workers.

With the operations having moved upstate, the Ams properties in Manhattan were sold off beginning in 1916.  Manufacturing jewelers Arnold & Co. took over No. 399 Washington Street in 1919.  In March 1933 the building would get a long-term tenant, Steinhardt & Kelly; one with an amazing background.

Joseph H. Steinhardt was born in 1854 in Tauberbischopsheim, Germany where his parents ran a small shoe and leather store.  The New York Times reported decades later, "Wonderful tales reached the family of the fortunes to be gathered in the United States, and at 13 the boy crossed the ocean to obtain his share."

The teen, however, was obstinate and strong-willed.  That resulted in his being kicked out of the house of the relative where he was living.  With no money and little command of English he worked briefly as a newsboy, then was hired by a newspaper editor as a night time messenger on the condition that he would go to school during the day.  He didn't.

Eventually a truckman asked him to roll barrels of apples on the fruit pier.  When he was finished Joseph was given a bag of apples as payment.  He ate five during the day while he went door-to-door selling the others, netting 50 cents.  He suddenly realized how he could make money.

Before too long he advanced to bananas and by the time he was a young man had saved enough to buy a pushcart.  But he encroached upon the territory of a young Irish vendor and daily the two battled.  The Times said "Day after day the German and the Irishman abused each other until the former suddenly suggested: 'Let's cut this out and be partners.'  Thus was created the firm of Steinway & Kelly."

The newspaper said "The partners started their joint business with a horse and wagon, developed a house-to-house trade with families, added hotels, and finally a step of great important--gained entraince to the business of supplying ships.  The firm was among the chief operators in opening up the farm regions of the West and Northwest.  In 1924 Steinhardt told an interviewer "Each year, to some two hundred-odd new fruit growers I advance $4,000,000 and pay the railroads $2,500,000 in freight charges and the telegraph companies $60,000 in tolls."

Kelly died in the early 1920's, followed by Steinhardt's death on December 10, 1926.  Steinhardt & Kelly, Inc. was doing more than $15 million in business a year at the time.  Steinhardt's step-son, Norman D. Frank received controlling interest in the firm. 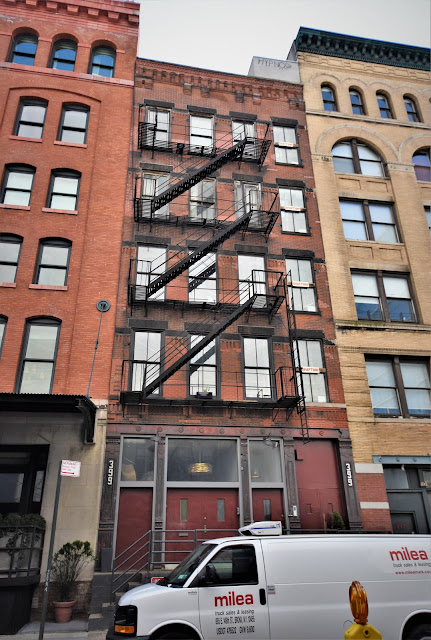 The company operated from No. 399 Washington Street through the 1970's.  In 1988 it was converted to apartments, one per floor above the commercial first floor.  While the cast iron piers and lintel of the old storefront survive, the industrial in-fill is regrettable.  Despite the mismatched brick repairs, the early 20th century fire escape and 120 years of grime (making the granite lintels appear black), William Graul's interesting neo-Grec design survives nicely.

photographs by the author
many thanks to reader Richard Pacheco for requesting this post
Posted by Tom Miller at 2:49 AM