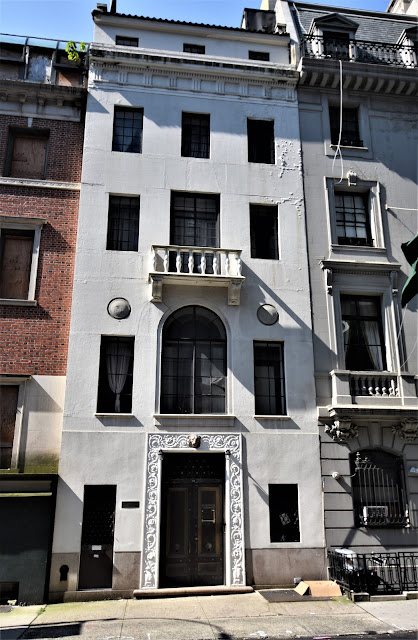 In January 1904 The Canadian Electrical News reported that Philip Green Gossler had resigned as general superintendent of the Montreal Light, Heat & Power Company to accept the position of general manager of J. G. White & Company, electrical engineers in New York City.  The article noted that Gossler "is one of the youngest of the many young men filing positions of great responsibility in the electrical field."

Indeed, the 34-year old electrical and mechanical engineer was a rising star in his field.  When he was just 22-years old he had "conducted a series of most complete tests of incandescent lamps," according to the article.

Gossler and his wife, the former Mary Claflin, had married in November 1895.  Mary came from a wealthy Brooklyn family, her grandfather being the millionaire dry goods merchant Henry A. Claflin.  In reporting on the couple's engagement, Brooklyn Life magazine took a passing shot at Philip, saying that his "pluck and intelligence compensate for a slight deficiency in physical stature."

Philip and Mary had three children, Katherine, Philip, Jr. and Mary Claflin Gossler.  But domestic troubles loomed and around 1918 Mary filed for divorce.  Philip's romantic eye had wandered to Alice Muller Choate, the wife of Joseph K. Choate.   Alice, too, obtained a divorce in 1919 and she and Philip were almost immediately married.

When The New York Times reported on Mary Claflin Gossler's society wedding on May 2, 1920, it essentially ignored her father, calling her simply "a daughter of Mrs. M. Claflin Gossler."

At the time of the wedding Mrs. F. B. Keech owned the four-story brownstone at No. 14 East 65th Street, built in 1879.  For years it had been operated as a boarding house by "Mrs. Thompson."  On January 9, 1923 The Times reported that the house had been sold to "a well-known New Yorker who will rebuild the house for his own occupancy."  The newspaper predicted the total investment would be "approximately $200,000," or nearly $3 million today.

The "well-known New Yorker" was Philip Green Gossler.  He hired architect William Welles Bosworth to design a modern residence in keeping with his wealth and social standing.  Although the original plans were apparently to "rebuild" the old house, as was common practice, it was demolished.  Bosworth replaced it with a five-story neo-Classical limestone-faced residence strikingly reserved in decoration.

The centered entrance sat within a vine-carved frame with a lion's head above the door.  At the second floor, or piano nobile, a tall arched opening held two French windows (which seem to cry out for a balconette).  A Juliette balcony graced the French doors at the third floor; while the tiled-roofed fifth floor sat demurely back behind a substantial cornice.  A discreet "penthouse terrace" was to the rear.

The somewhat severe facade in no way reflected the glittering entertainments that went on inside.  On November 12, 1928, for instance, the Gosslers held a dinner dance for newlyweds Edward Barford and the former Grace Stanley, daughter of Lord and Lady Ashfield of London.  Among those on the impressive guest list were Prince Orsini, Duke di Bianconcini, Lewis Gouveneur Morris and his wife, and the Howard C. Brokaws.

The Gosslers were well-known in the fashionable summer resorts; and in 1929 they completed a winter home, as well.  On March 24 The New York Times reported that they "gave a housewarming in their newly completed Winter home on Hog Island, Nassau, the Bahamas, last week.  The extensive grounds were illuminated with hundreds of orange and buff lanterns and with electric lights placed in the palms and shrubs leading from the wharf to the house."  Throughout the evening two orchestras took turns playing.   The article noted that "a supper was served early in the evening and breakfast after midnight."  Mingling with the moneyed guests from stateside were Sir Charles William Orr, Governor of the Bahamas, and his wife Lady Orr, and Captain E. V. Manners-Smith, the governor's aide-de-camp.

By now Philip was president of the Columbia Gas and Electric Corporation.  In 1930 he was deemed by James W. Gerard, Ambassador to Germany, as "one of fifty-nine men who rule America."  He was a member of "several well known social clubs," according to one newspaper and a governor of the Automobile Club of America.

But once again his marriage suffered turmoil.  On December 19, 1931 Alice was granted a Reno divorce on the grounds of cruelty.   The acrimony of the split was such that Alice took back her first husband's surname, Choate.

Philip leased No. 14 to Charles Woodruff Rogers, an esteemed organist and operatic coach.  Rogers was the organist at the Cathedral of St. John the Divine and during World War I had composed several patriotic war songs, including "You Are the U in the U.S.A." and "Wait Till My Ship Comes In."  The 64-year old bachelor died on January 25, 1938.

Two months after Rogers's death Philip G. Gossler, (who had risen to chairman of the board of the Columbia Gas and Electric Corporation) married Georgia Saffold Oates, the widow of Captain William C. Oates.  He moved his new bride and her daughter, Marion, into the 65th Street house.  It came just in time for Marion's introduction to society.

On November 17 a debutante reception was held in the house, followed by a dinner dance at the St. Regis Hotel on December 19.  Marion, who was born in the plantation-like mansion, Belvoir, in Montgomery, Alabama came from a well-established Southern family.   Her grandfather was General William Calvin Oates of the Confederate Army, who had served as Governor of Alabama for several years, then as a senator for 18 years.  Her great-great-grandfather was Chief Justice Reuben R. Saffold; and her grandmother was well-known poet and writer Mildred Reynolds (Mrs. William A. Saffold).

For the November reception, Marion wore the gown which her grandmother had worn at the first inauguration in 1893 of her grandfather as governor.  The Times reported on the floral decorations of the house, saying "Cybotium ferns in the entrance hall formed the background for a string quartet, and roses and delphiniums were used to decorate the drawing room.  Tea was served in the dining room, where yellow roses provided the floral motif."   Philip, Georgia and Marion received "in the music room before a screen of ferns and pink chrysanthemums."

Philip retired in 1940 when he was nominated as the Presidential candidate of the Republican Party.

In addition to the Hog Island estate, the Gosslers wintered at Belvoir in Alabama.  On June 3, 1942 The New York Times reported that Philip and Georgia "have arrived from their home in Montgomery, Ala., and Mrs. Gossler's daughter, Miss Marion Saffold Oates, who has come from Washington, are at the Gotham."  (Wealthy families most often spent several days in upscale hotels while their homes were being prepared after long absences.)

Marion's engagement had been announced only days earlier.  Her marriage to Thomas Leiter took place in June that year.

Philip Green Gossler died at the age of 74 on May 18, 1945 following a brief illness.  Within four months the estate sold No. 14 to Jean Murdock.  The New York Times said she was "a Californian who intends to alter the house extensively and occupy part of it."  Her renovations, completed in 1946, included a doctor's apartment and office on the former basement, one apartment on the ground floor, two "furnished rooms" on the second, one apartment on the third floor, and a duplex above.

Murdock sold the house in August 1952 to inventor Cesare Barbieri.  Born in Bologna, Italy, he had come to America in 1905, becoming a citizen in 1929.  He held multiple patents, including a invention for a paper-cup-making machine, and one for the manufacture of anti-freeze.  His residency would be somewhat short-lived.  He died at the age of 78 on May 25, 1956.

In October 1967 Alvin Gallant purchased No. 14 for a reported $250,000 (more in the neighborhood of $1.8 million today).   The Times reported that he "plans extensive alterations and will occupy the entire house with his family."  That did not happen.

Instead he sold it to Gordon Gray, Jr. in 1971, who in turn sold it to the People's Republic of the Congo on February 26, 1975 for "in excess of $400,000," according to court documents later.   The Congo Government remodeled the house for use as the Congolese Mission to the United Nations.  It was not long before Gray regretted the sale.

The Mission was responsible for making payments on a $400,000 mortgage which was passed on to Gray when he originally bought the property.  In 1976 the Mission stopped making the payments.  Gray was forced to take out a loan to pay off the full mortgage--making him once again the owner.

Gray now owned a mansion with a tenant who was not paying rent.  In 1978 he started eviction proceedings; but the Mission's attorney Mark J. O'Connor, claimed diplomatic immunity.  He told a reporter the issue was "not really whether money is owed," but that the 1976 Foreign Sovereignties Immunity Act protected the Mission from eviction.

Gray told a New York Times reporter in January 1978 that "This immunity thing is unbelievable," He called the entire situation a "horror show" and complained "They just don't have to pay anything."   He was no doubt even more incensed when on January 17 a judge dismissed the eviction attempt saying that "a summons to foreclose the mortgage had not been properly served."

It may have been the unflattering press that prompted the Mission a month later to tell Gray through its attorney that it was ready to reach "reasonable" settlement.  The results of that settlement were not published. 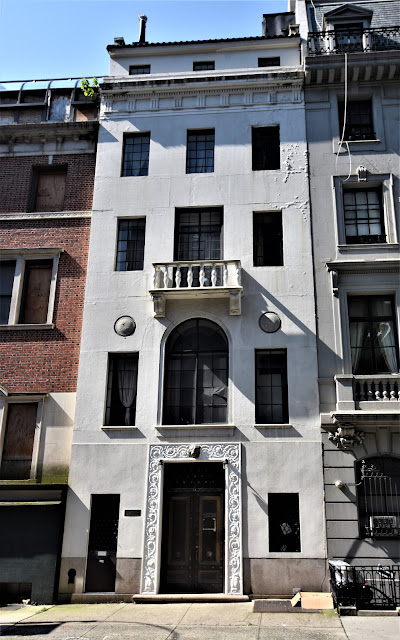 The Permanent Mission of the Peoples Republic of the Congo to the United Nations remained in the mansion until recently.  Despite the several internal renovations since Gossler's death, the exterior is unchanged since its completion in 1923.