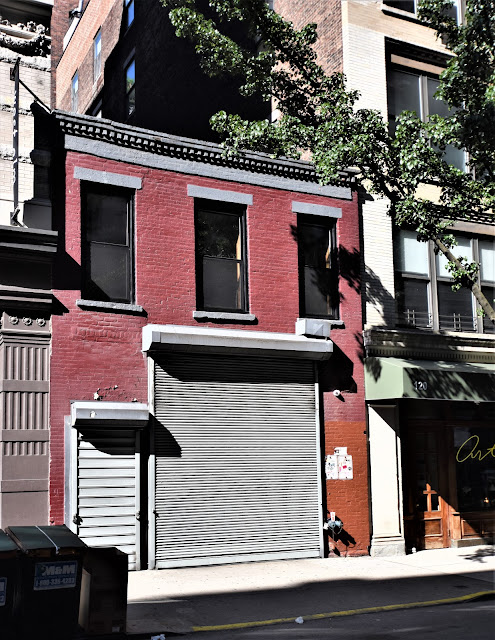 On November 18, 1916 The Real Estate Record & Guide commented that "Samuel Longstreet...was active in the up-building of this section seventy years ago."  That district was West 14th Street and the blocks above.  Longstreet not only erected speculative homes in the quickly developing neighborhood in the 1840's and '50's, but utilitarian structures as well.

One of those was No. 118 West 18th Street, a two-story stables.  Faced in brick, it exhibited the expected layout of a stables building--a large carriage bay flanked by a doorway.  Simple stone sills and lintels served the upper floor openings, and a double row of brick dentils decorated the cornice.

Because of the unpleasant odors and noises that emitted from stables, they were often relegated to what was called "stable blocks."  The 18th Street block between Sixth and Seventh Avenue was home to several stables as well as small shop buildings.

On January 10, 1856 fire broke out in the two-story "dyeing and haircloth" factory on West 17th Street, directly behind No. 118.  That building was destroyed and, as the New York Herald reported "The fire extended to two ranges of brick stables, Nos. 116 and 118 West Eighteenth street."   While the buildings appeared small, the damage reveals their commodious internal proportions.  "About twenty stalls were destroyed," said the article.

After repairs were made to the structure, it was used by Matthew Cavanagh for his blacksmith shop.  He additionally listed himself as a locksmith, the two vocations often going hand-in-hand.  On the night of March 13, 1860 the shop was broken into, the thieves making off with "a number of keys."  Cavanagh placed a $74 value on the brass keys, about $2,280 today.  It did not take police long to track down the culprits.

On March 16 The New York Times reported that "a part of the property was found in the possession of three lads, named Thomas Riley, Joseph Leeson and Stephen Miller, who, having been arrested, were held for trial by Justice Kelly.   Upon questioning, Leeson admitted that it was he and Miller who had perpetrated the burglary, and the Riley had simply received the stolen goods.

Cavanagh closed the business in 1866.  Auctioneer Thomas Gaffney held a sale of "the entire Stock, Tools and Fixtures of the well established Iron Railing Shop" on June 10.

By now Fifth Avenue and the blocks branching east and west of it were lined with the mansions of Manhattan's wealthiest citizens.  Each of them required a private carriage house for their several horses and vehicles.  No. 118 was conveniently close to the William Henry Osgood residence at No. 10 West 20th Street and it soon became his stables.

Osgood was married to the former Marie Emilie Schenkberg.  The couple had one son, William, Jr.   Their lavish summer estate, Oakview Villa, was on Newport's fashionable Bellevue Avenue.  Osgood, a broker, was prominent in yachting circles, he was a member of the New York Yacht Clubs.  His memberships to other exclusive social clubs included the Union and Metropolitan Clubs.

The Osgoods appear to have routinely updated their vehicles.   Advertisements throughout the years reflected the range of vehicles necessary to transport wealthy families in different seasonal conditions and functions.  On January 3, 1869, for instance, a "pony sleigh, with robes and double harness" was offered for sale; and on September 21, 1872 an advertisement offered "Coupe for sale--With pole and shafts, very light and in perfect order."

The advertisements often mentioned that the Osgood carriages were "by Wood."  Wood Brothers Co. was well-known and respected for the quality of its elegant vehicles.  An advertisement in Harper's Weekly in May 1873 promised "These carriages, without exception, of the best quality and superior finish, comprise the extensive assortment of all the latest styles of Modern English, French, and American vehicles."

An apartment on the second floor was home to the Osgood coachman.   For whatever reason one stable employee was looking for a new job in the summer of 1874.  J. Jordan's June 2 advertisement read: "Situation Wanted--By a young man, as coachman, groom, or to take care of road horses; country preferred."

Three years later Osgood gave his help in finding a new position for his coachman.  An ad in The New York Herald on September 19, 1877 said "A gentleman wishes to obtain a situation for his coachman, whom he can highly recommend as a first class man, leaving me on account of selling my horses."  The excuse of "selling my horses" may have been made up, since Osgood continued to house his carriages and horses here for years.

In the spring of 1883 Osgood appears to have considered adding a third floor to the stable.  Architect and builder J. M. Grenell filed plans for "owner, W. H. Osgood," on March 9 to "add 6 feet to height" at a cost of $200.  For whatever reason, the project never went ahead.

The elegance of the Fifth Avenue and 20th Street neighborhood had severely faded by the 1890's.  Sixth Avenue, steps away from the Osgood carriage house, was lined with massive department stores and the elevated railroad ran up its center.  The mansions of Fifth Avenue were being converted or raised for commercial purposes.

Osgood transferred title of the stables to his son in 1895.  The millionaire died in his West 20th Street mansion on December 12, 1896.

The following year, on November 1, 1897, William H. Osgood, Jr. sold No. 118 to attorney John M. Bowers for the equivalent of $655,000 today.  Bowers, who represented major clients like the Rapid Transit Company, most likely never personally used the building.  It was soon converted to factory space. 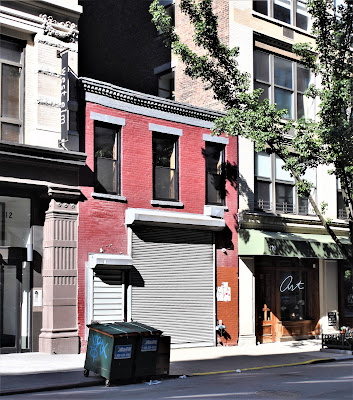 Milblowe & Company was here in 1915, employing 17-year old Harry Roth as a shipping clerk.  He and a cohort, Frank Mahar, took a day trip to Tuckahoe that summer.  Their outing had nefarious purposes which ended with both behind bars.

Roth entered the shoe shop of M. Keckeis on August 31 to buy shoe laces.  The Scarsdale Inquirer reported "in some mysterious way [he] managed to extract a book of trading stamps from the cash register while Keckeis was making change."   Although he was apparently lightning fast in spiriting the book, he did not have time to pocket it.  So he sat down on it.

But Keckeis noticed a corner of the book peeking out.  "He fell upon the thief, but the latter evaded him and fled down Scarsdale Avenue toward Yonkers."  Roth was quickly captured.

In the meantime, Mahar entered the shoe store and tried essentially the same crime.  "But Keckeis was warier now and he caught the thief red-handed," said the newspaper.   Mahar gave the shoe seller "a stiff three-minute fight and got finally free, running toward Yonkers and landing into the welcoming arms of Office Dalton."

Roth confessed that he and Mahar "were members of a gang of New Yorkers who had come to Westchester for the purpose of filching stamp books, which they sold to brokers at $9.75 per book."  The books cost the shop keepers $12.50.  Yonkers police said that in one recent week more than 30 books of trading stamps were reported missing.  The teens were sentenced to 30 days in jail.

As modern factory buildings and warehouses rose along the West 18th Street block, the brick stable building survived--home to small businesses throughout the 20th century.  No doubt the most surprising of all was Wm. R. Warner & Co., Inc., listed here prior to 1937.  According to The Antique Cannabis Book, the pharmaceutical firm manufactured, in part, Cannabis, known today as medical marijuana, . 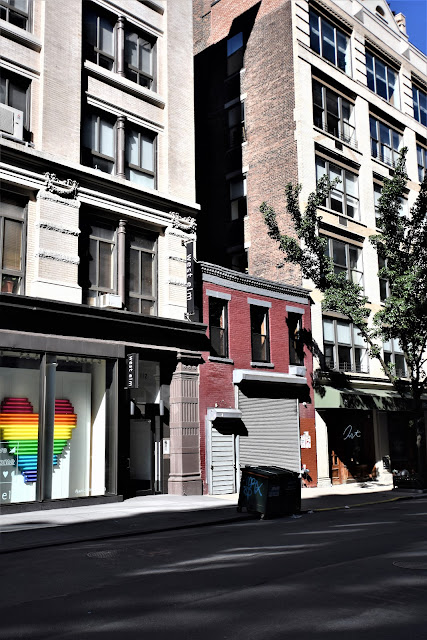