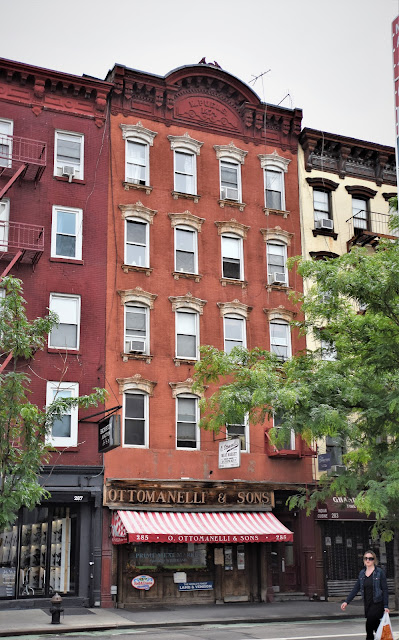 In the spring of 1874 38-year old butcher Michael Puels embarked on an ambitious project.  Born in Bavaria, he had garnered enough money to acquire the 25-foot wide building at No. 285 Bleecker Street.  Now he envisioned a five-story building which would not only accommodate his butcher shop, but provide rental income from the apartments above.  It seems that Puels' American dream was happening.

Puels always intended that he and his wife, Clara, would live in one of the apartments over his store.  But he would never see his building completed.   A few months after ground was broken, on Wednesday, August 26, Puels died.  His funeral was held in St. John's German Lutheran Church on Christopher Street the following Sunday.

Clara forged ahead with the project.  The completed Italianate-style structure was faced in orange brick above the cast iron storefront.   Boekell added elaborate pre-cast elements which elevated the design above the norm.   The openings sat on molded, cornice-like sills supported by pretty decorated brackets.  Effusive lintels adorned the segmental-arched windows, each wearing a lacy tiara-like ornament called an acroterion.  The over-the-top cast iron cornice included an arched pediment and the large plaque: M. PUELS 1874.  It not only dated the building, but memorialized its owner. 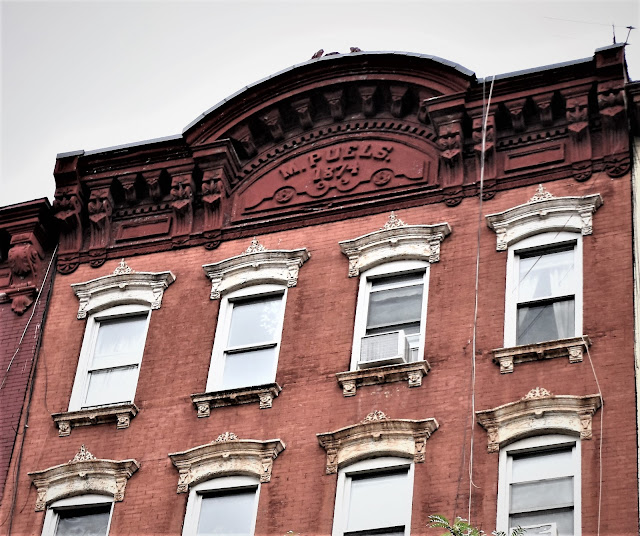 The shop space was leased to butcher J. Andre.  Clara Puels moved into one of the apartments as her building filled with ten blue collar families.  The residents in 1876 were policeman John O'Shea; watchman Thomas McDonough; Edwin Rogers, a porter; cabinetmaker Adolph Sabberton; two clerks, Camille Feniel and Charles E. Blum; Philip Bouton, whose drygoods store was directly across the street at No. 286; "driver" Charles Ryerson; Bertha Magner who dealt in "men's furnishings;" and William H. Fanning, an artist.

After two decades at the location, Andre sold his butcher shop to Louis J. Schwartz on November 1, 1895.  But, somewhat surprisingly, his business was slow to take off.  In an apparent effort to increase sales, he applied to the city for a license to use the sidewalk for a "newsstand or fruit stand."  It was granted on December 3.  But Schwartz's troubles continued.

On December 20 he locked the doors, disconnected the tube to the gas meter, and inhaled the gas.  He was later found dead.  The New York Times remarked "He had occupied the store only two months and had not been successful.  He had been drinking heavily."

Clara Puels leased the store to F. A. Ecks & Co., which listed itself as a delicatessen.  The company operated another shop in Brooklyn.

After owning and living in No. 285 for more than three decades, Clara sold the property on April 3, 1906 to Louis P. Dowdney.   The sale sparked a game of real estate hot potato.  Dowdney held it only three days before selling it to Denis M. Gallo.  Gallo sold it to Camille Sisti and Giacinta Rubino on April 17; and they resold it on Lorenzo Ciaffone and his wife, Lucia, 10 months later on February 21, 1907.  The surnames of the string of owners reflect the heavily Italian population that lived in the Bleecker Street neighborhood at the time.

The Ciaffones, who lived nearby at No. 110 Thompson Street, not only halted the rapid-fire turnover in ownership; but improved the aging structure.  On July 9, 1910 the Real Estate Record & Guide reported that Ciaffone had hired architect Max Muller to make "extensive changes."  Most significant was a new storefront and a fire escape.  The alterations cost Ciaffone $5,000--or about $133,000 today.

When the Ciaffones sold the building in 1918 the store was home to the Royal Tea Co., run by L. Rothman.  The ongoing world war at the time would change the lives of all Americans in one way or another.  It seriously affected the Lagazio family who lived upstairs that year when son Salveni was drafted into what the New-York Tribune called "the New National Army."  On April 2 he was sent to the Camp Upton at Yaphank, Long Island.  (Ironically, in the 1930's Yaphank became a center of Nazi activity and the former training camp was renamed Camp Siegfried.  Nazi uniform-wearing bund members held parades and carried swastika emblazoned banners and flags.)

In 1964 Onofrio Ottomanelli had purchased the building.  His butcher shop, Ottomanelli Brothers had been in business since 1900 and since 1957 had operated a few steps away at No. 281 Bleecker Street.  In 1989 when Viazza's lease ran out, Ottomanelli moved in--returning the space to a butcher shop as Michael Puels intended more than a century earlier.

The city-wide repute of the shop was reflected when The New York Times reported on a murder upstairs on November 5, 1999.  "The victim, who detectives described as a 48-year-old white man, was found at 4:15 p.m. by a tenant of the building at 285 Bleecker Street, also home to O. Ottomanelli & Sons, one of the city's oldest and best-known meat markets."

The man (who was not a resident) had been bludgeoned to death.  His body was discovered by 29-year old film editor Luis Moreno who lived on the top floor. 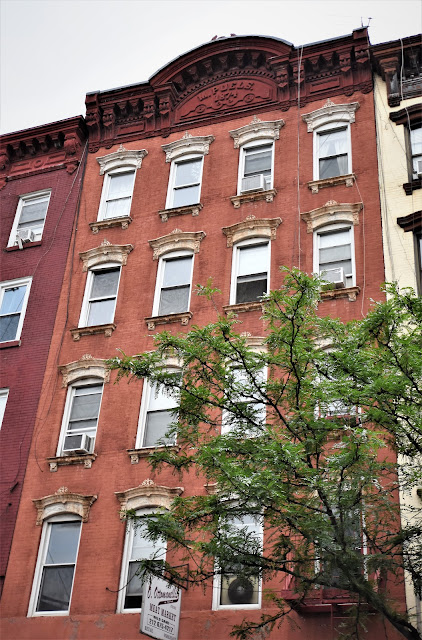