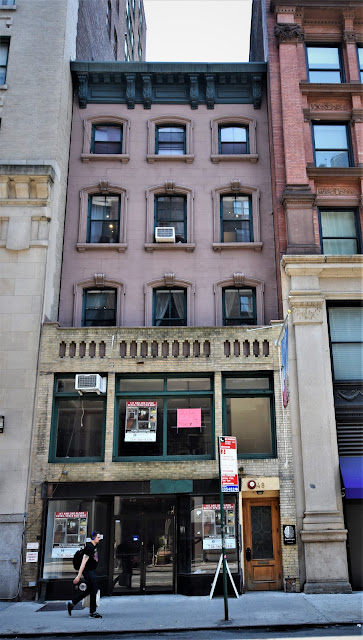 In the decade before the outbreak of Civil War lavish brownstone homes lined the block of West 20th Street, between Fifth and Sixth Avenues.  Begun in 1854, the 25-foot wide Italianate style row house at No. 48 was completed the following year.  The upscale residence rose four stories above a high English basement.  Its dignified design included architrave openings with scrolled keystones and a prominent metal cornice with paired foliate brackets.

Documents show the house was constructed for D. E. Aguirre; but that may be a clerical mistake.  Peter A. Aguirre was a partner with Thomas Galwey in the importing firm of Aguirre & Galwey on Pearl Street.  The firm owned at least one of its own sailing ships and imported items like molasses.

Whichever Aguirre built No. 48, it was Thomas Galwey and his wife, Sophia, who moved in.  Five years later the couple had a scare when somehow a fire broke out in a wardrobe upstairs.  On October 15, 1860 The New York Times reported "At 11 1/2 o'clock a fire occurred at the residence of Mr. Thomas Galloway [sic], No. 48 West Twentieth-street.  It originated in a clothes-press."  A passerby who happened to be a volunteer fire fighter rushed in and extinguished the fire.

At the time of Thomas Galwey's death in his Westchester County home on February 23, 1874 No. 48 was home to E. P. Fabbri and his wife.   The wealthy businessman was treasurer of the Edison Electric Illuminating Co. of N.Y. and the Edison Electric Light Co.  The couple were highly involved in charitable organizations.  Mrs. Fabbri was a manager in the New York Orthopaedic Dispensary and Hospital, and a member of the committee member in The Italian School under the charge of the Children's Aid Society.  Fabbri was a trustee in the Health Home or Sanitarium at Coney Island among many other involvements.

When Mark M. Stanfield purchased the house in 1884 he enlarged it to the rear with a one-story extension.  Stanfield was the proprietor of the lavish Victoria Hotel on Fifth Avenue, owned by the fabulously wealthy and autocratic Mrs. Paran Stevens.   A widower, he had three grown sons, George Otis, Hugh M. and Henry R. Stanfield.

Henry was perhaps the most interesting of the three.  A Civil War veteran he was an operatic tenor and had toured Europe under the name of Signor Del Santis.  He was married to the former Florestine Youenes, described by The New York Times as a "member of an old New Orleans family."

On August 20, 1890 The New York Times ran the headline "Too Much For A Grandson" and reported that the Stanfield brothers had initiated "objections to the will."  In the meantime, Florestine was appointed "guardian of the estate" until Douglas reached his 21st birthday.  Included in Douglas's inheritance was the 20th Street house, his grandfather's Morris Plains country estate with its stable of horses, and the proprietorship of the Victoria Hotel.

Florestine leased No. 48, furnished, to a succession of moneyed tenants.  Mrs. Catherine Colville was here in 1892.  Like Mrs. Fabbri, she was active in charities and was treasurer of the American Female Guardian Society and Home for the Friendless.  The following year Mrs. Ruth Ross Lee, a member of the Daughters of the American Revolution was living here; and in September 1894 Florestine leased the house to J. C. Clifford.

By now Henry Stanfield had died and Florestine and Douglas were living in the Victoria Hotel and managing it.  The Times later noted that Douglas's "quarters in his hotel had several art treasures and antiques."

Placing the boy's fortune in his mother's hands proved to be a disastrous move.  The Stanfields "entertained many notables at parties" and Douglas, according to The Times, "at one time affected a garb reminiscent of Beau Brummel."  There was nothing left of the inheritance by the spring of 1895.

The trustees of the estate of Paran Stevens, owners of the Victoria, filed suit for $75,000 in back rent on April 5 that year (unbelievably, more than $2.2 million today).  They obtained an injunction stopping Florestine and Douglas "from removing the furniture and mirrors in the hotel and in the house at 48 West Twentieth street."  The Sun reported that "young Stanfield, through his assignee, was preparing to dispose of this movable property, which descended to him from his grandfather, in order to meet his private debts."

With nowhere else to go, Florestine and Douglas moved into No. 48.  By now the neighborhood had drastically changed.  Sixth Avenue, steps away, was lined with retail emporiums and the massive Cammeyer building, reportedly the largest shoe store in the world, edged up to the Stanfield house.  On January 18, 1899 the mother and son nearly lost their home to a fire in the Cammeyer store.

The massive blaze nearly destroyed the building.  The New York Times reported "The flames made the dwelling at 48 West Twentieth Street, uninhabitable, and its owner and tenant, Mrs. H. R. Stanfield and her son...were obliged to vacate.  They managed to get most of their furniture into vans and out of danger."

When the smell of fire and smoke were finally purged, Florestine briefly leased the house to The College Women's Club.  On December 10, 1899 The Times reported "It has just opened well-appointed club rooms at 48 West Twentieth Street, and it was confidently prophesied last night that by next season the club's cherished ambition will be realized and it will be giving entertainments in its own house."

That soon proved to be ill-grounded confidence.  Six months later, in June 1900, Florestine Stanfield sold the property to Cammeyer.

Douglas Maxwell Stanfield's life would be an interesting, if not necessarily a financially successful one.  Upon his death in May 1950 The Times recalled him as the "former Broadway actor, who inherited a fortune from his grandfather and in later years worked as a day laborer."

After a brief but rather successfully career on stage, he moved to his grandfather's Morris Plains estate around 1910.  Little by little he sold off parts of the grounds to survive, and around 1915 took a job as a road worker for the county.  When he died at 77 he was living off the county pension on "what was left of the estate in Morris Plains."

Back on 20th Street, after purchasing the house in 1900, A. J. Cammeyer hired architect Charles Rentz to do $3,000 in renovations, including new steel beams and girders and new openings.  The facade retained its domestic appearance, however, and it appears the shoe firm used the house only as an annex for storage.

In 1914 Cammeyer joined the other retail establishments in abandoning Sixth Avenue as the shopping district moved further uptown.  In 1919 No. 48 was leased to M. & L. Diamond Co., makers of trunks and "fibre cases" (i.e., suit cases).  Owned by Minnie and Louis Diamond, the firm remained in the former house until being forced into bankruptcy in August 1921.

Owners Fried-Furman made significant changes to the once grand home in 1925 when architect Joseph J. Furman converted the former basement and parlor levels to a store, and the upper floors to factory space.

Not especially attractive even at the time, Furman's alterations included a two-story extension where the stoop and areaway had been.  Faced in beige brick, it included a storefront at street level and three large show windows at the second floor.  A single door led to the upper floors.  A pierced brick parapet was a half-hearted attempt at architectural decoration.   The brownstone facade of the upper three floors retained its 1855 appearance.

Among the small factories and offices doing business from the building at mid-century was Tee Jay Toys, Inc.  The firm made and sold novelties here for several years.  In March 1956 if offered its new "All plush 30" standing bear."  The ad promised "cotton stuffed--no straw." 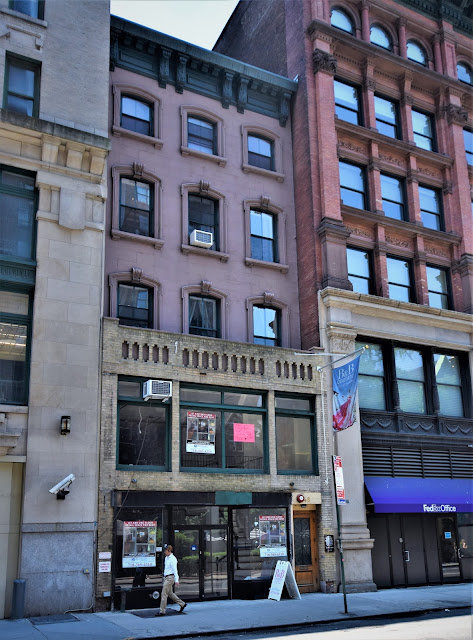 The Ladies Mile was rediscovered in the last quarter of the 20th century.  The former department stores which had sat neglected and abused for decades were renovated as apartments, clothing stores and restaurants.  The dingy store at No. 48 still awaits a similar reformation.  But above the 1925 distraction, the remnants of Thomas Galwey's once-proud mansion survive.