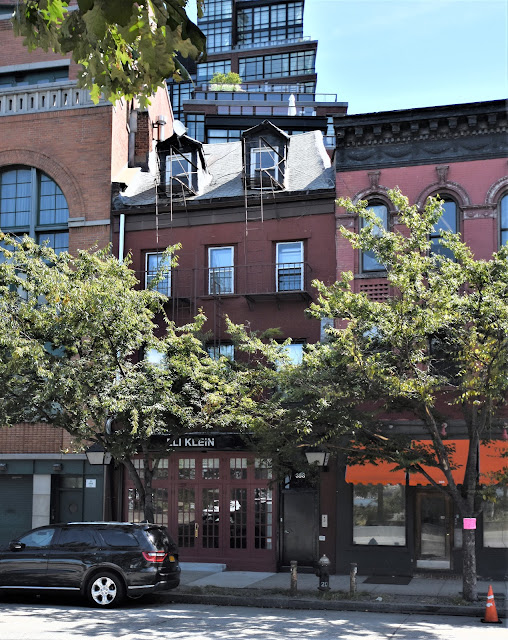 In 1830 flour merchant Isaac Amerman began construction of a house and store at No. 293 West Street, between Amos (later renamed West 10th) and Charles Streets.  Completed the following year, the Federal style structure was faced in Flemish bond brick.  Its ample 22-foot width and two-and-a-half stories above the store would provide Amerman and his wife, Jane Maria, comfortable living quarters.

Despite the pretentious proportions of the structure, it sat within a sketchy neighborhood even in 1831.  Amerman almost assuredly chose the location in anticipation of selling bags of flour to the ships that moored across West Street.  Other merchants, like ship chandlers and crockery shops, began lining the street at the same time.  But as the Greenwich Village docks soon multiplied, West Street would become often dangerous, especially after nightfall, when rough-edged sailors roamed among the riverfront saloons.

It seems Amerman borrowed the money for his venture from a relative; for only a year into his business Peter Amerman along with cabinetmaker John Vanboskerck foreclosed.  In 1832 they sold the building to William and Gerardus Post.

There is little doubt that the Post brothers purchased the building merely as an investment.  They were partners in the large paint establishment founded by their father, William, in 1754.  Upon his death in 1800 the firm name had become William & Gerardus Post.  By now they were among New York's wealthiest businessmen.

The brothers retained possession for eight years, selling the property in 1840 to merchant James Dean.  Like the Posts, he and his wife, Elizabeth, would not live in the building.  Having amassed a fortune through his linen business that included a London branch, the same year that he bought the West Street building he began construction of four other structures nearby on Hudson Street.  Dean died in 1847, but Elizabeth retained possession of all the Greenwich Village real estate.

Two years before Dean's death West Street had been renumbered, giving No. 293 the new address of No. 398.  The tenants in the upstairs rooms were, expectedly, blue collar.  In 1851 two carpenters, Robert Tai and John Aikin, and shoemaker Michael Fanning had rooms here.

In 1853 the Scott family lived in the building.  The couple's lives were no doubt already difficult when tragedy struck.  On Saturday evening June 4, at around 6:00, their son, William, stepped into the path of an Eighth Avenue street car at the corner of Charles and Hudson Streets.  The New York Herald said that one of his legs was "dreadfully mangled."  He was carried into the drugstore of Dr. Muller at the corner of West 11th Street (then still named Hammond Street) and Greenwich Street, and then transported to the City Hospital.  The New York Herald reported "Notwithstanding this care, however, bestowed upon him, he died in the course of the same night."

At the time the storefront was leased to J. H. & W. W. Rimmey, which included in its business the booking of river vessels.  An advertisement in The New York Herald on June 17, 1856 read: "The charter for excursions--the large and commodious double decked barge Superior, of Cedar Hill, in complete order  Can be seen at the foot of Amos street.  For terms apply on board, of Captain Geer, or at the office of J. H. & W. W. Rimmey, 398 West street."

A possible disaster had been averted a month earlier when a fire broke out in one of the upper rooms on May 17, 1856.  The cause was listed as "children with matches."

After George Roahr leased the store space in 1865, its personality would be drastically changed for decades.  Known familiarly as "Buck," he was only 27 years old at the time; but had already made a name for himself in boating circles.  A partner in Roahr & McGrady, he not only designed and built sports boats, but was highly involved in racing them.  On October 1, 1865, the same year he leased the West Street store, for instance, The New York Herald reported on the races held the day before.  It listed Roahr among the crew of The Atlanta, a "six oar, lapstreak outrigger, built by George Roahr."   He was made the "stroke oar" of the Atlanta Club 1857 and would retain that position for more than a decade.

Roahr converted the former flour store, then office, into a saloon.  He escaped bad press in 1867 when, on Sunday June 30, officials raided the saloon.  It was not Roahr's name which was printed in the newspapers, but that of Joseph B. Boyce, most likely his barkeeper.  Boyce was held on $300 bail for selling liquor on Sunday.  (It was a significant amount, equal to more than $5,000 today.)

It was most likely Roahr who battled the City for a "cross-walk" to be laid from the docks directly to the front of No. 398 in 1868.  Cross-walks were essentially the same as the wooden "side-walks," except they were laid across a thoroughfare rather than beside it.  The boards would make crossing the dusty or muddy West Street easier, and would definitely be a boon to Roahr's saloon business.

The Board of Aldermen rejected his request.  But Roahr was determined.  He took his case to the Court of Appeals, which set aside the Board's decision.  On July 30, 1868 The New York Times reported that the Board of Councilmen had conceded and that the mayor had approved the crosswalk on June 19.

George Roahr was still a bachelor at the time and, despite his successful business and sterling reputation, he listed his address above the saloon until 1870.  That year the business was leased to J. A. Wilson.  The saloon went through a number of proprietors in rather quick succession.  In 1875 James Conchin took it over, and then sold the business to J. Smith the following year.  Smith paid the equivalent of $21,000 today.  Two years later Patrick Shanahan ran the saloon, installing a new store front in April 1878.

Ellizabeth Dean died in 1891, however her estate continued to own and manage No. 398 and the Hudson Street properties.

In 1903 the saloon got its most colorful proprietor yet, Russian-born Herman Klatzko.  Described by The New York Times as being "of distinguished bearing," Klatzko also owned a restaurant on the Lower East Side, where most of his countrymen lived.  He preferred be present himself in a grander, more flattering light than a saloon or restaurant keeper, however.

In October 1903, the same year he took over the West Street saloon, his wife, Minnie, sued him for "money advanced on December 8, 1902."  The action was the first hint of problems.  Herman and Minnie were essentially newlyweds; having married on June 25, 1901.  Less than a year after the first lawsuit, on May 24, 1904, she had him arrested--this time for a more shocking allegation.

The Sun reported that he was being held in the Tombs, charged "with having unlawfully married his niece, Minnie Klatzko."  When reporters interviewed him in his cell, he informed them that he was a riding master and "says he once taught an Austrian prince."  The newspaper said that at the time of the marriage Minnie was 19 years old "and had been in this country only a month."  Herman counter-sued and both were held on $1,000 bonds for trial.

It may have been that ugly affair that prompted Klatzko to give up the saloon business that year.  But his name would be in the newspapers again before long, for even more nefarious reasons.

Although he still ran his Grand Street restaurant, by 1909 he was identifying himself as a Russian count.  His eye had been caught by the popular and lovely Lizzie Shapiro, described by the New-York Tribune as "an actress, well known in Jewish circles."  Although Klatzko lavished his attentions on her, Lizzie's heart belonged to Max Goldberg, a dresser at the People's Theatre.

On December 15, 1909 the New-York Tribune ran the headline "AN ACTRESS SHOT / Victim, Apparently, of Jealousy, with Her Companion."  The article explained that Lizzie Shapiro and Max Goldberg had been standing at the doorway of her apartment building on Forsyth Street when they "were shot and probably fatally wounded."  It added "Herman Klatzko, known as 'Count' Klatzko...was locked up in the Eldridge street station, charged with the shooting."

Police talked to Sigmund Schwartz, a neighbor.  The New-York Tribune repeated what they learned in florid prose.  "Klatzko carried out his plan of revenge with all the diabolic nonchalance of the villain of a thrilling melodrama.  He is forty-eight years old, and has been in love with Lizzie Shapiro, who is twenty-four years old...for a long time."  Schwartz told police he noticed Klatzko loitering around the block the afternoon of the day before and "that for hours he never took his eyes from the entrance to the building where Miss Shapiro lives."

Schwartz was awake at 3:00 on the morning of December 14 and saw Lizzie and Goldberg arrive at her door, where they paused to talk.  He heard six shots and saw them both sink to the pavement.  He rushed out just in time to see Klatzko light a cigarette and walk calmly away.  Both victims, before their deaths, identified Klatzko as their assailant.  When he was arrested and searched, a photograph of Lizzle Shapiro was in his pocket.

The shocking details of the trial were covered by newspapers as far away as Utah.  Readers were, perhaps, shocked when the trial was briefly stopped on May 23, 1910 when the judge, the Assistant District Attorney, and Klatzko's lawyer stepped out for a private two-hour discussion.  Klatzko offered to plead guilty to manslaughter in hopes of getting a lesser sentence.  The D.A. refused to accept a a plea to any crime less than murder in the second degree.  The trial resumed.

The evidence against Klatzko was overwhelming.  One witness, actor Boris Thomashefky, said Klatzko told him after the shooting "It had to be done.  Don't ask me any questions."

The trial finally came to an end on May 24, 1910 when Klatzko pleaded guilty on both counts.  Newspapers like the New-York Tribune were no longer referring to him as a count, but as a "saloon-keeper."  He was sentenced to between 19 and 29 years in prison, which the New-York Tribune said "is almost equivalent to life imprisonment, for Klatzko is now fifty-five years old."

Prohibition caused the McQuades to change the saloon to a "restaurant."  But while the name changed, the patrons and the operation remained essentially the same.  Then, on January 8, 1923, William McQuade was arrested after a raid by Prohibition agents.  He was held on $1,000 and arraigned before Prohibition Commissioner Horace G. Hitchcock.

The McQuades left No. 398 in 1925.  During the Depression years Raymond Thompson leased the shop, beginning in 1935.  His West Shore Grill was well known to dock workers for more than a decade.

When the estate of Elizbeth Dean sold the building, along with the Hudson Street properties, in June 1956, The New York Times remarked "The transfer was the first since 1840."

The riverfront neighborhood was slow to share in Greenwich Village's emergence as a Manhattan's cultural and bohemian epicentery.  Except for a stint as the home of Alexander Zeitlin's truck covers business for 1955 through 1965, the former saloon space continued to see coffee shops, delicatessens and food shops come and go throughout the 20th century and into the 21st.

Upstairs, however, things were slightly different.  Erik Wensberg lived here in the 1960's and as late as 1970.  A reviewer for The New York Times, he was also editor of the Columbia Alumni News / Columbia University Forum.  Simultaneously, Cuban-born playwright Rene A. Buch lived in the building.  He founded the Greenwich Mews Spanish Theater in 1968 and was its artistic director.  (It was renamed Repertorio Espanol.)  He would go on to receive an Obie Award for "sustained excellence in direction" and a Drama Desk Award in 1996 for "sustained excellence."

Despite the alterations throughout its nearly 190-year history, No. 398 West Street retains much of its domestic Federal period appearance.

photograph by the author
Posted by Tom Miller at 3:03 AM