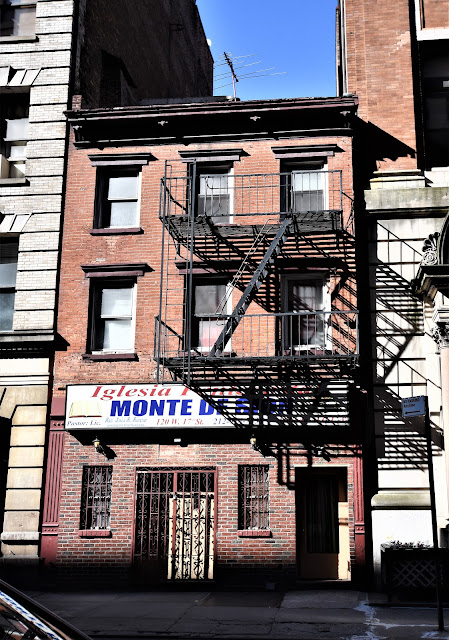 Following population boom of Greenwich Village the 1820's enterprising businessmen established stage routes between the hamlet and New York City to the south.  Asa Hall, however, envisioned opportunity to the north.  In his 1896 book Reminiscences of An Octogenarian of the City of New York Charles H. Haswell recalled that in 1836 Hall operated "the Greenwich lines [which] had small stages ('carry-alls' they were termed), in which passengers were transferred from Charles Street to their destination within the limit of Twenty-third Street and Seventh Avenue."  Hall's bullish confidence in the area north of 14th Street resulted in his erecting three brick-faced frame homes on West 17th Street, between Sixth and Seventh Avenues.

At just over 20 feet wide and three stories tall, the vernacular style homes at Nos. 86 through 90 were intended for middle-class families.  Hall's tenant of No. 90 had at least one servant in 1851, when she was looking for work elsewhere.  Her advertisement on August 26 read:

Wanted--By a Respectable Protestant girl, a situation as Cook or Chambermaid; can give the best of reference.  Inquire at No. 90 West Seventeenth street, in the basement.

Hall retained the houses as rental properties, advertising Nos. 90 and 92 for lease in February 1856 simply as "the three story brick houses."  Within the decade the block suffered decline.  At lease one livery stable was erected, bringing with it the objectionable odors and noises that drove many families away.

By 1862 No. 90 was being operated as a rooming house.  Among the residents was 28-year old tailor Patrick Boyle.   On the night of December 28, 1862 he and three or four friends visited a "disreputable house" on Howard Street where they were regular patrons.

One of the girls who worked there was 19-year old Mary Demarest.  While hundreds of Irish immigrant girls went into domestic work, the hard-edged Mary turned to prostitution.  For whatever reason, that night she singled out Boyle to harass.

While the Irishmen were having several drinks, Mary "commenced to annoy Boyle in various ways, and continued to do so even after he and the friends who were with him, remonstrated with her, and begged her to desist," according to The New York Times.

The situation grew more intense as Mary continued to hassle Boyle "in various ways" until he slapped her.  The teen became incensed and "aimed a violent blow" at his head which he dodged.  The tailor had had enough with the annoying woman.  The doorkeeper later testified he saw Boyle strike Mary three times, "one blow on the right side of the face, and two on the head; with the last blow she fell on her face to the floor."

Boyle strode out to continue drinking in a saloon on Grand Street.  Before long a policeman entered and informed him that he had killed Mary Demarest.  "When taken into custody, he manifested much surprise when told that the woman was dead, and made no effort whatever to escape."

The coroner deemed the cause of death "compression of the brain, the result of violence at the hands of Patrick Boyle."  Witnesses all declared that the injury was caused by Mary's head hitting the hearthstone; but Boyle was held on $2,000 bail (more than $50,000 today) awaiting a grand jury trial.

The meager financial means of the tenants of No. 90 was evidenced in an advertisement place by one of them who as looking for work on April 2, 1864.  "Wanted--By a respectable woman, to do a gentleman's or family's washing."

One of the renters the following year was operating her business from the house.  An advertisement on May 23, 1865 read "Dressmakers wanted--Also one who understands Wheeler's sewing machine."

Although the 17th Street block was less than elegant, Asa Hall had installed the latest amenities.  An ad offering "a pleasant front room, nicely furnished" in 1866 noted "gas and water."

In 1868 West 17th Street was renumbered, giving the house the new address of No. 120.  Asa Hall died in 1896 and his properties, including the three 17th Street houses, were sold at auction.  No. 120, described as a three-story tenement, was purchased by John Campbell for $15,000--about $457,000 today.  By now Sixth Avenue nearby was lined with sprawling emporiums and the elevated railroad ran up the center.  Campbell's roomers appear to have all been Black by now.

One of them found himself behind bars on December 27, 1898.  Policeman Quinn was on patrol at 39th Street and Eighth Avenue at 10:00 that night when he heard "two men loudly quarreling and also thought he heard the click of billiard balls," according to the New York Journal.   It was a Sunday evening and playing pool was, therefore, against the law.  He called another officer and the two "burst into the room, with drawn pistols, and shouted that every man was under arrest."

Among the men arrested was "George Wharton, colored, of No. 120 West Seventeenth street," said the article.  "All of these men were locked up, though each denied that he had been playing."  Wharton was charged with "violation of the Sunday Law."

A terrifying incident occurred on September 4 the following year, when a vicious bulldog appeared outside the house.  Whether or not it belonged to a roomer was unclear; but The Sun reported "Five persons, three of them children, were bitten by a buldog [sic], which dashed out of the areaway of a house at 120 West Seventeenth street yesterday afternoon, and went on a tear west to Eighth avenue."  Cab driver John J. Murphy put an end to the mad dog's rampage by clubbing it to death.  The article noted "Nobody knew to whom the dog belonged."

A tenant who identified himself as S. M. F. in his classified advertisement in January 1901 had achieved a remarkable accomplishment.  He described himself as "Young colored man, single" and a "private dentist."  Although he promised "will furnish reference," it soon became obvious that the hard work it took to obtain his professional standing was for naught.  A subsequent advertisement read "Porter or Valet--By sober, honest, trustworthy young colored man; single.  Address S. M. F., 120 West 17th-st."

A similar ad was placed by "Dickerson" the following year.  On January 21, 1902 his advertisement read "Porter or Waiter--By respectable colored man; city or country."

In 1906 a cast iron storefront was installed in the ground floor, the first hint of changes to come.  Abraham Kadish leased the entire building in 1912 and it was probably at this time that the upper floors were converted to lofts.  In 1916 Continental Garment took space, and by 1918 the Created Embroidery Company was in the building.  That year it advertised for a "Young lady to take charge of hand embroidery department; must be able to estimate on work."

In 1921 Max Cohn and his son, Nathan, manufactured ladies dresses on the second floor.  But a tip came into police headquarters in August that year that Cohn "was making more than ladies' wearing apparel," according to The New York Times on August 21.

Detectives Guran and Mulderig went to the location on the evening of August 20.  The ground floor was home to the Midtown Lumber Company and the third floor held a tailoring shop.  There were no lights or signs of life in either of those businesses; but, according to The Times, "Mr. Cohn's skirt manufactory was brilliantly illuminated."

The street door was securely locked, so Guran climbed the fire escape and entered an open window.  The New York Herald reported "There he found a girl and three men engaged in filling and corking bottles and labeling them Gordon gin."

The two Cohns and another employee, Matthew Cerino, were filling bottles with grain alcohol while Josephine Ilardo, who worked as a button-hole maker during the day, sat pasting counterfeit labels to them.  The New York Herald reported "It took three patrol wagons to transport the grain alcohol, gin, two stills and other illicit stuff seized on the premises to the station houses."  At the station all "the four prisoners declared they did not know they were breaking the law."

Somewhat surprisingly, on August 15 all four were released by Magistrate Max S. Levine.  Despite the overwhelming evidence, Levine ruled that "the officers had no search warrant and there is no proof that there was any sale of liquor.  The thing savors of unlawful entry to me and that the officers were overzealous in their duty."

The factory space where skirts and liquor were produced were gone in 1929 when the upper floors were converted to "nonhousekeeping" apartments, two per floor.   Major change came in 1978 when the retail space was converted to a Spanish language church.  While the storefront was filled in with brick, the 1850's domestic appearance of the upper floors, including the bracketed cast metal cornice, were left intact.

Surrounded by commercial buildings, the little brick house is one of the last reminders of the early 19th century residential neighborhood.

photograph by the author
Posted by Tom Miller at 1:55 AM