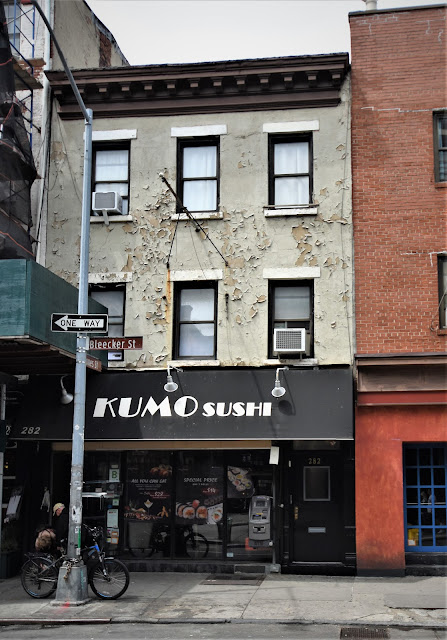 Possibly no one in the first decades of the 19th century was more influential in transforming Greenwich Village from a rural hamlet to a bustling suburb than Charles Oakley.  On October 5, 1819, for instance, he purchased 20 lots bounded by Herring, Jones and Cornelia Streets.  He paid $8,000 for the property--nearly $160,000 today.  It was merely a hint of Oakley's prolific development that would continue for decades.

The wooden structure was three stories tall and three bays wide.  A simple wooden cornice most likely capped the design.  The two floors above the shop level were originally intended as the home of the shopkeeper or a tenant family.

Oakley leased the store by 1835 to Andrew Quackenbush.  The two men had an interesting relationship in that Quackenbush had purchased a house from Oakley just steps away in 1832.  Quackenbush was gone the following year, with the dry goods store now run by Andrew Nixon.  In 1839 Charles Oakley sold the building to brothers Uriah and Henry Hendricks, who continued to rent out the store and upper rooms.

By 1848 Thomas Miller was the store's proprietor.  He lived nearby at No. 180 4th Street.  The turnover in ownership of the shop continued with Hull & Myers operating it in 1851 and Henry M. Livingston its owner the following year.  Livingston ran the store and lived upstairs at least until 1860, sharing the upper floors with tenants like John Hillery, a carpenter.

Bleecker Street was renumbered in 1859 and the wooden building got the new address of 282.  It continued to house dry goods stores.  Dry goods stores offered a variety of items like ready-to-wear clothing, bolts of fabric, and sundries like needles, thimbles, and small household goods.  Following Livingston, Henry B. Cowles ran his store here during the Civil War years.

After his family owned the property for three decades, Montague M. Hendricks sold No. 282 to Jacob Langstadter in June 1869 for $6,000; a little more than $110,000 today.   Born in Germany, he and his brother Bernhard, would operate their "fancy goods" store, J. & B. Langstadter, here for years.  Fancy goods stores were slightly different from dry goods stores in that they also offered ribbons, stationery, inkstands, and such.

Both Bernhard and Jacob listed their addresses as No. 282.  Certainly Bernhard's family lived upstairs.  He and his wife, Helena (known as Helen), had five children, Clara, Ida, David, Aaron and Rosetta.  Their home was the scene of David's funeral on January 23rd, 1879.  He had died two days earlier at the age of 29.

At least some of Jacob's and Bernhard's sons entered the business.  In 1883 Aaron was working as a clerk, Benjamin was listed as "merchant," and Henry as a salesman.

Bernhard died on July 14, 1885.  Within months the Langstadter family made alterations to the building, possibly in preparation to sell.  Architect William Graul faced the building in brick and it was most likely now that the cast iron storefront and pressed metal cornice were installed.

On April 17, 1886 the building was sold, now described as a "three story frame (brick front) store and dwelling."  Executed in two separate transactions, Moses Herz and his wife, Elise, paid Helena $8,575 for her half, and Jacob Langstadter the same amount for his.  The total outlay would equal $460,000 today.

The new owners returned the upper floors to rented rooms.  By 1893 the store with its long tradition of dry goods and fancy goods shops was home to Henry Carque's candy store.  He made his confections in the basement.  There were several families living upstairs, including that of R. D. Burke, whose 4-year old son, Joseph, was seriously ill with influenza in January 1894.

At 3:30 on the morning on January 16 Henry Carque stood in front of his candy store chatting with Policeman Hopper and J. F. Egleston, a night watchman of a nearby factory.  Both men later remembered that Carque was not wearing an overcoat in the cold night air.

Officer Hopper recounted "At 3:35 he entered the store and was not seen again until Burke, one of the tenants, rushed out of the house screaming fire."  Upon later questioning, Burke said he had heard an explosion in the basement and saw Carque rush out of the back door and escape over a fence.

Hopper turned in a fire alarm and rushed into the building, awakening the residents.  "The halls were filled with smoke, and there was a peculiar smell that excited his suspicion," reported The Evening World.  It added "Many tenants in the house had narrow escapes."

Fire fighters searched the rooms and found little Joseph Burke still in bed.  "The child was sick with the grip, and was carried out to neighbors," said the article.  The exposure to the January air was too much and he died the following day.  The New York Times reported "It is claimed that had he not been carried out of the house when the fire was discovered he would have recovered."

On January 22 Henry Carque was arrested and charged with arson.  His bail, nearly $150,000 in today's dollars, reflects the severity if the charges.  Fire Marshall Mitchell pointed out in his affidavit that there was not $200 worth of inventory in the candy store, but Carque had a $3,000 insurance policy on the stock and fixtures which was due to expire two days after the explosion.

Carque's trial began on June 18 and lasted five days.  New Yorkers were doubtlessly shocked to read in the morning papers on June 23 that he "was acquitted yesterday."

Among the tenants upstairs at the turn of the century was Police Sergeant James F. Thompson.  He came home for lunch on April 30, 1900.   Heading back to work, he entered the hall directly from his dining room and was surprised to see a man crouched down, peeping through his parlor door keyhole.

The surprised intruder explained "I wanted to see if you wished to give an order for a photograph," and opened a leather case containing prints and orders for a Fourth Avenue photography studio.

Sgt. Thompson asked why, then, was he peeping through the keyhole.  He was told he just wanted to see if anyone was at home.

"Well, you have found that I am at home," said Thompson.

Identifying himself as a police officer, he checked the man's pockets and found an 18-inch long "jimmy," used to enter locked doors.  Thompson arrested him.  The New York Times reported that the would-be burglar grumbled "I didn't know I was going to stack up against a cop or I never would have tackled this job."

He gave his name as John Kelly, but at Police Headquarters "he was recognized as John Fogarty, alias Sullivan, who on June 7, 1895, was sentenced by Judge Cowing for attempted burglary to two years and six months in Sing Sing."

By the end of the World War I the Bleecker Street neighborhood had filled with Italian immigrants.  The Herz family sold the 21-foot wide building in 1922 to Giuseppe and Assunta Fiorentino who, according to The New York Herald on December 22, intended to "occupy for business."   Indeed, Assunta Fiorentino ran a hairdressing salon from the store space through 1936, when it was take over by the Trio French Bakery.

On August 19, 1943 Jane Holt, writing in The New York Times, described the bakery in vivid detail.  "Bread and rolls reign supreme in the Trio French Bakery, 282 Bleecker Street, with not a cake or pie or cookie in sight to eclipse their homely, substantial beauty.  Of European heritage, they have been the sole occupants of the shop ever since it opened seven years ago."

The huge ovens were located behind the store and every morning long "arms" of French bread, round Italian loaves and the canoe-shaped Viennese loaves moved from the back to the front.  Trio also produced crescent-shaped soft rolls "studded with crystals of pretzel salt," poppy seed rolls, and "crisp butter sticks" about six inches long.

In 1953 the bakery was purchased by Giovanni Bakery Corp.  Its owners Mario Martini and Charles Lazzaro both lived upstairs.

Artist Harold Weston and his wife, the former Faith Borton, lived here by the late 1960's.  A past president of the Federation of Modern Painters and Sculptors, his paintings were exhibited in the Phillips Gallery and other collections.  He painted the mural in the lobby of the Federal Procurement Building in Washington D.C. between 1936 and 1938.  Weston died in his apartment on April 11, 1972.

By now the brick facade had been stuccoed over and painted.  The store was home to Aphrodisia during the mid-1980's.  The spice store offered about 2,000 culinary herbs and spices sold from two-gallon apothecary jars.

In 1992 architects James Jao & Associates installed a new storefront, which fronts a sushi restaurant today.  Above, the peeling paint gives the nearly 190-year old building a rather beleaguered appearance.  Hiding behind the 1886 brick is what the Landmarks Preservation Commission said in 2010 is "one of the few surviving frame structures in the area."