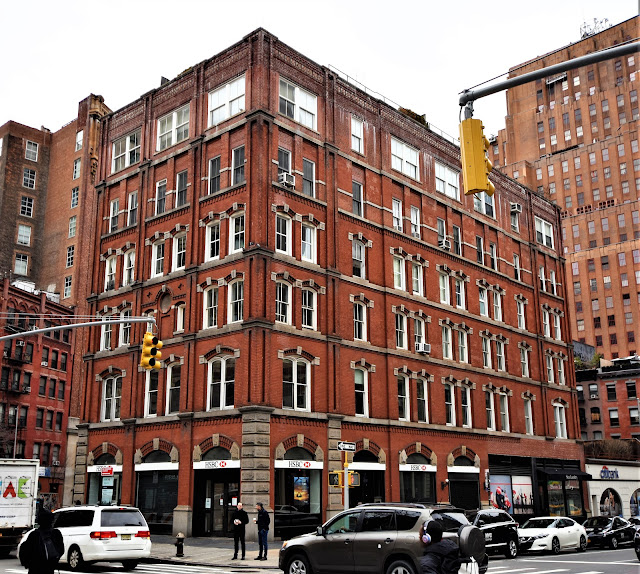 On January 14, 1873 Horace K. Thurber paid Francis B. Wallace $19,000 for nearly the entire block bounded by Hudson, Duane, West Broadway and Reade Streets.  The price would be equivalent to about $400,000 today.

Thurber contracted architect Charles F. Mengelson to design a warehouse structure for his wholesale grocery firm.   Much forgotten today, Mengelson would be responsible for several warehouse buildings in the area, and the following year would begin work on the New York Evening Post building at Broadway and Fulton Street--one of Manhattan's earliest skyscrapers at ten stories tall.

Mengelson faced the building, completed in 1874, in red brick.  While rough-cut granite found in the keystones and corner blocks of the openings and in the heavy corner ground floor piers created a pleasing contrast, the stand-out of the neo-Grec design was the creative brickwork.  Projecting bricks formed handsome dentiled eyebrows in above the openings; while other designs were recessed: the incised lines of the piers, blind panels, and whimsical diamond shapes. 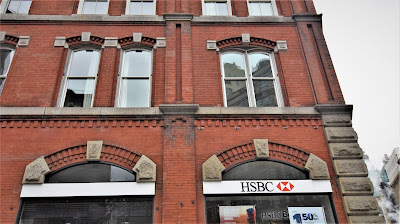 At the third floor of the Reade Street elevation a round-faced clock sat within a brick oculus.  The broad arched delivery bays of the ground floor were protected by a continuous metal awning.


Thurber had been in the grocery business since 1857.  Now, somewhat surprisingly, the same year that his new building was completed he retired.  The firm H. K. & F. B. Turber & Co. was reorganized as a new partnership, Thurber, Whyland & Co., with Horace remaining as a "special partner" and Frank Thurber now a principal.   The firm had branch offices in France and London.

In 1885 New York's Great Industries gave a hint at the astonishing array of goods handled by the company.  "The firm's price list is a veritable category of everything under the sun that is edible and appreciated by civilized palates" The article went on to say "the firm's catalogue of articles of food comprising a myriad of new forms for useful articles of alimentation, while the rare delicacies and entremets of France are quoted alongside the vast array of American canned and preserved goods, while from the firm's laboratory and drug department come a full line of essences, flavors and syrups."

James Brady worked as a shipping clerk in 1888.  He devised a method of stealing goods simply by having them shipped to his home address in Jersey City.  His greed outweighed his common sense and his shipments became too large to go unnoticed.  The detectives put on the case soon uncovered the scam.

The Evening World reported on July 3 "At 1 o'clock this afternoon a large two-horse wagon, bearing Thurber & Whyland's name, drove up to the Mott street entrance at Headquarters and two detectives in charge deposited on the sidewalk twenty-two barrels of refined sugar of high grade, all address to 'James Brady, Sussex street, Jersey City,' and which were found at the prisoner's house this morning."

The enormous haul was brought in as evidence in Brady's trial.   The clerk was behind bars and the newspaper said "His defalcations, it is thought, amount to many thousands of dollars."

Thurber, Whyland & Co. employed a full-time chemist who produced the items for its drug department.  Among them was its Wine of Coca.  An advertisement in 1890 promised "A wineglass of this tonic, taken when one is exhausted and worn out, acts as a most excellent restorative; it gives a feeling of rest and relief, and there is no reaction and no subsequent depression.  A general feeling of pleasantness is the result."

That the tonic resulted in a "feeling of pleasantness" and "rest and relief" is understandable.  On November 2 that year Dr. William A. Hammond addressed the New York Neurological Society, warning the members of "the impurities existing in most of the preparations of wine of cocoa."  But he praised Thurber, Whyland & Co., "prominent grocers and druggists," for having an "exceedingly competent chemist."  The doctor was pleased that Thurber, Whyland & Co.'s wine of coca contained "a fixed proportion of cocaine."

That same year Thurber, Whyland & Co. embarked on a clever marketing scheme.  They suggested to their retailers that they could take advantage of the "sort of mania, on the part of the small boys, for the collection of the largest quantity of tobacco tags, postage stamps, buttons, etc."  Thurber, Whyland & Co. said that the retailers could boost sales by offering free cigars or cash to boys who collected enough cigar bands.

Despite its world-wide reputation and military contracts, Thurber, Whyland & Co. was seriously affected by the Financial Panic of 1893.   On December 12, 1893 The Evening World reported that the financial status of the company was unclear.   Frank Thurber claimed he was "so busily engaged trying to reorganize the Thurber & Whyland Company that he could not give an account of his individual affairs."

Nevertheless, despite weekly sales of $3.5 million in today's dollars, the firm failed.  It was reorganized in June 1894 as the American Grocery Co.  Frank B. Thurber continued as a director in the firm, but no longer as an officer.


By the end of World War I the immediate neighborhood was changing from the grocery and produce district to the shoe district.  In 1921 the ground floor of the former American Grocery Co. building was occupied by the Merriam Shoe Manufacturing Company and the upper floors "principally by the shoe trade," according to the New-York Tribune.

At around 6:00 on the evening of February 8 fire broke out in the Merriam Shoe space.  It increased to four alarms and threatened other nearby buildings.  The glues and chemicals used in shoe manufacturing created a toxic smog.  The New York Times reported "Stifling clouds of smoke enveloped lower Manhattan and were blown into the Chamber Street station of the Seventh Avenue subway, causing much discomfiture to the going-home crowds."

Damage to the structure was estimated at $100,000 and almost completed destroyed the topmost floors.  A month later the burned building was leased to an organization headed by Louis B. Brodsky and Samuel Augenblick.  The New-York Tribune noted "The Brodsky-Augenblick syndicate plans to spend in the neighborhood of $300,000 in modernizing the structure and converting it into an office building with stores."


The tenants of the renovated structure reflected the changing personality of the neighborhood.  Among the first was the National Airphone Corporation.  Its advertisement in Popular Science in July 1924 urged:  "Radio Dealers:  Send for protected Agency proposition on Monodyne Apparatus."

Another tenant in the industry was Knight Electric Company, Inc.  An article in The New York Times on September 4, 1936 was headlined "Radio Group is Accused" and reported that the FCC had charged the firm "with unauthorized use of well-known trade names and the appropriation of the reputation and good-will of certain established companies in the sale of radio receiving sets, tubes, and accessories.

Seven years later another tenant was in hot water.  Wartime restrictions on items like rubber, nylon, sugar, wool and leather were strictly enforced.  So when United Industries Company was found "selling tires to persons not entitled to receive them," according to the Office of Price Administration, the feds moved in.  On February 4, 1943 the firm was indicted by a Federal grand jury.

The Office of Price Administration did not have to look much farther for another violator.  On March 23, 1944 Brust Footwear Company, along with 31 other shoe wholesalers, was ordered "to stop selling or delivering shoes" outside of Federal restrictions.  The OPA issued the order, said a spokesman, "to stamp out retail black markets."

The American Roland Corporation was an import-export pharmaceutical company.  Five years after the end of World War II its president, Max S. Scheidt, issued a warning to U.S. chemical manufacturers.  He said, according to The New York Times on December 26, 1949, "To prevent Germany's rehabilitated and fast-growing chemical industry from regaining its pre-war dominant position in the world market, American manufacturers must combat the myth of superior quality of German goods."

No. 16 Hudson Street continued to attract tenants in the radio and chemical industries.   David Kossimar & Sons, Inc. was here by 1951, dealers in imported electronic goods like "ultraprecision inspection and testing instruments" used in plants working on national defense contracts.

The United Mineral and Chemical Corporation was in the building by 1958.  Among its products was self-adhering weatherstripping.  In the late 1970's and early '80's Charisma Lega Supply Co., Inc. called No. 16 home.  But before long all the commercial upstairs tenants would be gone.

In 1984 a renovation resulted apartments above what was now ground-floor retail shops.  Vervain Flowers and Plants was here in 1988 as was the newly-opened The Acute Cafe.  Where once horse-pulled trucks were loaded with barrels of molasses and crates of canned goods, The Acute Cafe featured "a beautifully lighted setting of palm trees, gray columns, white-tiles floor and windows on three sides that look out onto the street," as described by The Times's Moira Hodgson on October 8 that year.

Manhattan suffered a plague of deaths in 1994 due to what authorities called "highly concentrated heroin being sold on the streets."  The crisis hit here when, on September 2, The New York Times reported "The police said they found packets of China Cat, the street name of a powerful heroin blend, and a syringe beside the body of a man who died in the living room of his TriBeCa apartment at 16 Hudson Street." 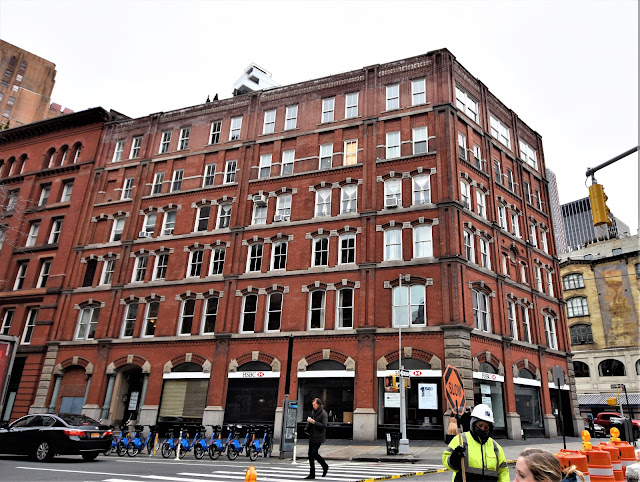 As Tribeca gained favor among celebrities, No. 16 had at least one well-known resident.  Actor Josh Harnett lived in a top floor loft before selling it in January 2018 for $3.55 million.