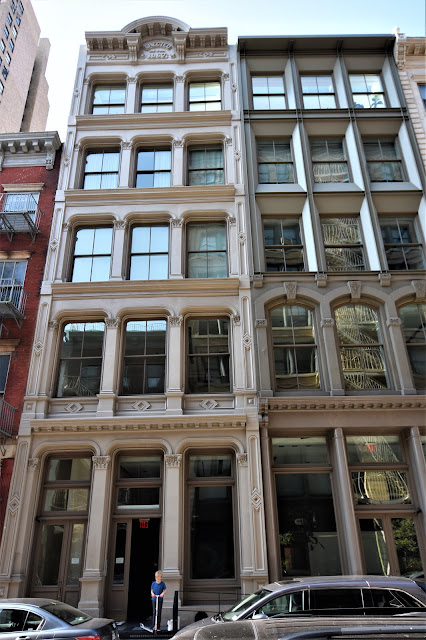 Louis Duhain, Jr. was born in 1829 in "a hotel then standing at Bowling Green," according to the New-York Tribune.   After being  educated in Richmond, Virginia he joined his father's artificial flower and millinery feathers importing business.

Louis's interests went beyond feathers and flowers.  In May 1868 he was awarded a patent for a new "mode of ornamenting fabrics."  The clever process used small translucent beads made of "gum arabic or other gum" secured to the fabric, to give the appearance of drops of water.

Construction in Manhattan had come to a near stop during the Civil War while the blue collar workforce was off fighting.  Peace brought a building boom.  It was mere months after the final shot was fired when Duhain hired architect Isaac F. Duckworth to design a five story loft building at No. 54 Lispenard Street in 1866.

Completed in 1868 the iron-faced building was designed in the new French Second Empire style.  Paneled piers ran up the sides and flat Corinthian-crowned pilasters separated the openings.  As he often did, Duckworth consummated the design with an elaborate cornice with an arched pediment announcing the construction date.

The project was purely an investment for Duhain.  His business remained on Broadway as the Lispenard building filled with textile and apparel firms.  Among the first were J. Gottscho & Brothers, silk merchants.

The six tenants in the mid-1870's reflected the dry goods district that now engulfed the Lispenard block.  Lipe, Nearing & Co. dealt in "woollens;" as did Josephus Hill.  Morris Nathanson and Leo Kaufman were both listed merely as "clothing" merchants; and Julius Schroeder and Ansell Hecht dealt in "trimmings" and "rufflings" respectively.

On July 1, 1881 Duhain sold No. 54 to Thomas H. O'Connor for $45,000--just over $1 million today.   The wealthy O'Connor was a trustee of the Emigrant Industrial Savings Bank.  His family operated a steel and hardware firm in San Francisco.

The last decade of the century saw more apparel than textile firms in the building.  Suspender manufacturers Carl Winderman and Equitable Suspender Co. shared the building with Samuel Platt, "wrappers" (the informal morning apparel worn by women, often to breakfast); and Abramovics & Eisner, makers of ladies' cloaks.  Not fitting the mold was Brodsky Bros., manufacturers of pocketbooks.

The tradition continued through the first decades of the 20th century.  But as the textile and garment industries moved north of 34th Street by mid-century, the Lispenard Street block saw significant decline.  The certificate of occupancy in 1962 demanded that the second story be used only for storage and that the upper floors were "to remain vacant."  The restriction was possibly for fire and safety reasons in the nearly century-old structure.

Eventually the Tribeca renaissance caught up with No. 54.  In 1977 Women in the Trades had its offices here.  Described as an "organization of skilled craftswomen that serves as a resource and information center and as a support group," it worked with the National Council of Neighborhood Women to obtain funds to operate an outreach program.

The building next door at No. 52 had been completed the same year at No. 54 and was also five stories tall.  but a 1937 fire had left a two-story stub.   In 2002, with Tribeca's old loft buildings being converted to galleries, restaurants and upscale housing, the owners sought to demolish the little building and erect a five-story apartment building.  The plans were shot down by the Landmarks Preservation Commission.

The owners' architects, Studio JS2, went back to the drawing board and came up with a design that would connect Nos. 52 and 54 and add a two-story addition above.  The plans received what The TribecaTrib called "a scathing rejection."  LPC Commissioner Diana Chapin said "this is very bland."

A mutually-acceptable compromise was finally achieved in an unapologetically modern, yet handsomely harmonizing three story addition to No. 52, completed in 2017.   While the combined structures share the address of No. 52 today, they maintain their separate personalities.  Amazingly, other than replacement windows, the 1868 storefront of No. 54 is virtually intact.

photograph by the author
Posted by Tom Miller at 1:58 AM