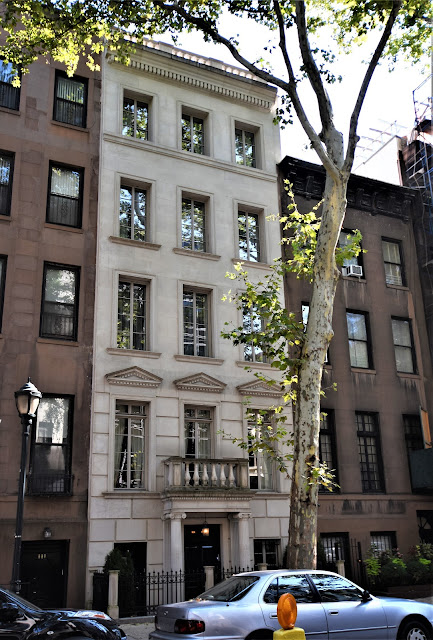 William P. and Ambrose M. Parsons were a total package in real estate operations in the late 1870's and early 1880's.  Their firm, W. P. & A. M. Parsons, acted as developer, builder and architect.  In 1881 the brothers began construction of a row of six speculative brownstone houses on East 64th Street between Park and Lexington Avenues.  Completed the following year, they comprise one of the firm's last projects.  In December 1883 W. P. & A. M. Parsons declared bankruptcy, with outstanding debts of half a million dollars.

Born in Alabama on February 24, 1852, Stapler was a Yale educated lawyer.  He would become District Attorney in 1891.  The family, whose country home was in Pelham Manor, New York, did not remain in the house for long.  It was sold to Charles W. Schumann in October 1884 and the $29,000 sale price reflected a significant loss.

This was possibly due to the fact that No. 113 sat, literally, on the wrong side of the tracks.  The trains that ran down the center of Park Avenue separated the fashionable from the acceptable.  The blocks east of Park Avenue would not become truly modish until the tracks were submerged and covered over around the turn of the century.

Schumann owned a jewelry store far downtown at No. 24 John Street.  He was duped by a clever 20-year old on August 1, 1888.  George J. Levy browsed the showcases of gold watches and took a fancy to one priced at $125.  The pricey trinket would be worth more than $3,000 today.  He mentioned to Schumann that he was the son of J. H. Meeker, whose name was familiar in New York as a wealthy banker.

Levy, aka Meeker, said he would "see his father about the watch."  Before long he came running back into the store, "without coat or hat," according to The Evening World, "and said his father wanted him to buy the watch."  He presented a check for the full amount.  The newspaper said "He got the watch and the check was discovered to be worthless."

Schumann was not the only merchant the young man fooled that day.  He gave a phony check to Mather & Wentworth for a $120 diamond ring; and cashed another for $298 at a bank.  He was caught and arrested later in the day.

The Schumanns stayed on in the 20-foot wide brownstone until March of 1890, when it was sold to Emma C. Freud for $28,500; another loss.  Something seems to have been going on along the block, for six other houses were sold the same day.

Real estate operator Thomas Blagden and his second wife, the former Sarah Sampson, purchased the house in 1902.  The couple had four children, Miriam, Thomas, Donald and Edward.  They maintained a second house in Washington D. C. where Thomas Blagden conducted much business.

"Camping"--a term vastly different in meaning than today--was becoming popular with millionaires at the time.  Upper Saranac Lake in the Adirondack Mountains had caught the attention of wealthy New Yorkers for its pristine views and ample hunting and fishing.  On June 10, 1906 the New-York Tribune noted "Upper Saranac is one of the most beautiful spots to be found in the mountains, and on its shores are some of the finest camps which the Adirondacks can boast.   Levi P. Morton has a fine camp on Eagle Island.  Isaac N. Seligman and Adolph Lewisohn both have fine camps on this lake.  Others are owned or occupied by John D. Rockfeller, jr., Percy Rivington Pyne, Robert Dun Douglas, D. L. Emmett Holt, S. P. Ferris, E. P. and S. A. Swenson and other well known New Yorkers."

The article continued "At the head of this lake is the deer preserve of Thomas Blagden, who occupies the cottage near by which was used by ex-President Cleveland during the time he spent in the Adirondacks several years ago."

The Blagden family was active in Saranac society.  Sarah sat on committees that organized benefits and functions.  On September 13, 1908, the same year that Edward graduated from Yale, the New-York Tribune reported on a fair given at the Casino by his brother, Donald, "for the benefit of the Adirondack Cottage Sanatorium."  The article mentioned "An unusual feature of the fair was the sale of a fawn for the deer preserve of the young man's father for $50."  In a separate article on the same page it was reported that "Thomas Blagden, jr., won the last of the sailing races of the season under the auspices of the Upper Saranac Lake Yacht Club."

Miriam's social focus seems to have been mainly in Manhattan.  In January 1914, for instance, she joined wealthy socialites like Mrs. Jonathan Bulkley and Mrs. Lucien H. Tyng in hosting a series of operatic talks in their homes for the benefit of the East Side House's music school.

Thomas, Jr. engagement to Ethel Noyes was announced in June 1914, followed by Edward's to Alice Ely the following year.

Thomas had met Ethel in Washington where The Sun said she "was one of Washington's undisputed belles."  The newspaper noted that the Blagden home "out on Spring road was one of Washington's show suburban homes, particularly on account of the deer which were to be seen grazing in the grounds, sometimes crowding down at the great gate and demanding a little friendly attention from the passers by and sometimes scampering off in pretty panic at some overstrenuous motor horn."

Because Thomas Jr. worked for a steel company, he was exempt from military service.  During the war he and Ethel moved in with her parents in Washington, The Sun calling her one "of the lucky war-time brides."

Miriam, on the other hand, was more hands-on during the conflict.  Popularly called "Blaggie" by her friends, she traveled to Europe to work with Anne Morgan and her American Committee for Devastated France.  In a letter to her mother dated April 6, 1919 Anne reported on the work of rebuilding the devastated country.  She mentioned in part "yet this month or rather next we are losing some of our very best old workers...Blaggie may have to leave in June."

Sarah and Miriam, still unmarried, remained on in the 64th Street house following Thomas's death.  While her aging mother essentially dropped off the social radar, Miriam remained active.  She opened the house for a tea hosted by Edward's daughter, Sarita, on October 27, 1937 for the junior committee for the New York debut of pianist William Fleming,

A year later the colorful Miriam, who ran her own real estate firm on Madison Avenue, appeared in newspapers for much more exciting reasons.  She boarded a monoplane at Floyd Bennett Field on November 8, 1938 with a friend, amateur pilot Cornelius E. Mitchell, at the controls.  The pair intended to fly to Mineola, Long Island, but rain and low clouds "cut the visibility to nil," according to The New York Times.  Mitchell was forced to land the airplane on a sand lot baseball field near Jamaica Bay.  The newspaper said "A few motorists passing on the boulevard paid no attention to the plane."

Sarah Sampson Blagden died in the house on Saturday, October 21, 1939 at the age of 91.  Rather shockingly, Miriam announced her engagement to George A. Crocker of Oyster Bay, Long Island just 11 days later.  The wedding took place in the parlor of No. 113 on November 9.

Miriam wasted little time in selling the house which had been the family home for nearly four decades.   The following year 13 furnished rooms were being rented in the house.   Unexpectedly, owner Theodore A. Cieslewicz did a remarkable renovation in 1948, removing the stoop and replacing the facade with dignified stone facade and porticoed entranced. 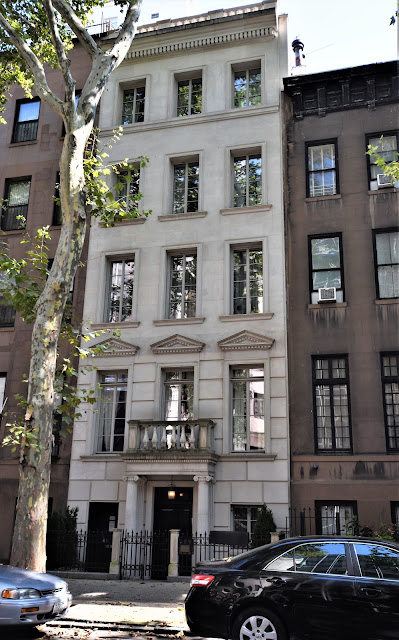 Despite the tasteful remake, it continued life as a rooming house until 1981 when it was converted to one apartment on each floor but the third, which contained two.