Bartolome B. Blanco was a successful importer as early as the 1840's.  By 1851 he was doing business at No. 107 Pearl Street.  Almost immediately after the end of the Civil War he delved into real estate, focusing for the most part in the far upper regions of Manhattan.  But in 1867 he turned to the changing neighborhood around Duane and Greenwich Streets.

The old brick and wooden structures in the area were rapidly being replaced by commercial structures.  Blanco demolished the brick building on the southeast corner of Duane and Greenwich Streets and in 1867 began construction of a substantial loft and store edifice.  Sadly, the name of his architect has been lost--for the structure completed the following year is striking.

Five stories tall, it is faced in red brick.  The architect went beyond the expected in making his Italianate-style factory especially handsome.   Each of openings wore exceptional cast iron lintels, their added expense spent merely to increase the building's attractiveness.  The distinctive cast iron storefront could have fronted an upscale Broadway shop with its generous, graceful arched openings and Corinthian pilasters.

Although the store fronted Greenwich Street, the building originally took the address of 192 Duane Street, where the entrance to the lofts was centered along the 59-foot length.

Among Blanco's first tenants was the safety match factory of John H. Breitman.  During the Civil War the Federal Government had required manufacturers of matches to place a 1-cent revenue stamp on each box of matches.  Now, although the war was over, the tax law remained in place and it does not appear that Breitman was happy about it.  (The tax, incidentally, was not lifted until 1883.)

In April 1869 inspectors seized more than 4,600 boxes of matches in Breitman's Duane Street factory "for being unstamped," as reported by The New York Times.  After he provided bonds, Breitman was allowed to hold the merchandise "to await the action of the Court."  But when a marshal showed up at No. 192 Duane Street in January 1870, the matches were gone.

John Breitman had sold the matches to John Loehr, whose store was on West 54th Street.  By now they were all gone and, as reported by The Times on January 28, "the Marshal was unable to take possession of the property after it had been condemned by the Court."  The men, called by the newspaper "two Germans," were arrested; Breitman for "removing condemned property" and Loehr for receiving it.  Both were held for trial.

In the 1880's W. A. Higgins operated his baking powder factory here.  On June 7, 1885 The New York Times (no doubt with some financial encouragement from Higgins) said his "baking powder is now used in all the leading hotels, restaurants, large boarding houses, together with private families, &c.  Higgin's Baking Powder contains no injurious ingredients and performs its intended work thoroughly.  We therefore recommend further patronage from our subscribers."

As the century drew to a close the neighborhood had become the wholesale produce district.  In 1890 produce merchant Benjamin C. Eggers leased the entire building, subletting space to other produce dealers like C. S. Durling & Co., here by 1891.   Eggers paid $8,500 per year, or about $236,000 today.  By now the storefront was using the address No. 323 Greenwich Street.  Confusion no doubt resulted, since the building next door already had that same address.

The winter of 1894 was particularly brutal, earning it the name The Great Freeze.   The frigid temperatures extended all the way to Florida and seriously affecting the food supplies.  Impoverished families in New York City were, quite literally, starving.

In response, The Evening World launched its Free Food Commission, seeking donations from butchers, grocers and produce merchants to be distributed in the tenements.  The World Almanac reported that within a two-month period it "gave to the poor of the city, irrespective of creed, color, or nationality, about $75,000 worth of the very best fish, flesh, fowl, vegetables and fruit that could be had in this market."  On February 24, 1894 The Evening World said that among the donations were 50 barrels of potatoes from C. S. Duhling & Co.

Benjamin C. Eggers and his partner, Michael Mullens, appeared in court in February 1896 after their delivery wagon was involved in an accident with the wagon of Benedict's Iron Foundry.   One of the Benedict horses was injured in the collision and Frederick W. Kehr who was not only the driver, but the superintendent of the foundry, was incensed.

Kehr stormed into No. 192 Duane Street and, as reported in The New York Times on February 19, "insisted upon being shown the driver, as he said he came from the Oak Street Police Station, and would place him under arrest unless the matter was settled."  Michael Mullens demanded to see Kehr's shield; but Kehr refused to show it until the driver was brought out.  Mullens sent for a policeman and Kehr was arrested for impersonating a policeman.

The turn of the century saw the "butter and egg" district moving into the neighborhood.  Around 1900 A. A. Honigsberg & Company leased space, and would remain for at least a decade.

In 1911 the firm was joined by egg merchants Albert & Gerber, organized by partners Benjamin Albert and Abraham Gerber two years earlier.  The American Produce Review explained "The firm specializes in frozen canned eggs for the bakery and confectionery trade, and maintains a sanitary breaking establishment equipped with all modern utensils for that line."

Despite that glowing review, Albert & Gerber was included in the Wicks Legislative Investigating Committee's 1916 list of merchants selling five-month old eggs which had not been refrigerated.  W. H. Willis, associate editor of The Produce News said on November 28, "as long as human nature remains as it is now and the laws allow it the egg business would be liable to remain much the same as it is today."  He added "about two dozen out of every case (a case contains thirty dozen) spoil during the long journey from hen's nest to table."

In 1916 similar tenants moved in.  Butter and egg dealers Rubenstein & London took space in March and would remain for several years; and the Chicago-based cheese firm J. S. Hoffman Co., moved in in August.  By 1918 another butter and egg merchant, Hyman Schechter had leased space in the building.

Before 1925 the Greenwich Street address problem had been solved.  Butter and eggs merchants Jonas Gewirtz & Son listed its address as 323A Greenwich Street.    Throughout the first half of the century other butter and eggs firms called the building home--H. Pinsky in the 1930's, Maurice Mandeville by 1939, and Jacob Stern in the mid- to late 1940's.

But signs of change came in the form of Waveguide Mfg. & Equipment Co., Inc. which moved into the entire third floor in December 1948.  A few months later, in June 1949, Electronics magazine informed its readers that the company "has just issued a new bulletin on its line of microwave and waveguide equipment."

By 1955 the Coin Radio & Television Corp. was here.  The company sold the coin-operated sets to hotels and motels.  An advertisement in Popular Mechanics in November that year described "steel cabinet, modern design, coin rejector."

Nevertheless, the egg and butter firms were not totally gone.  That year the store was home to the New York Amsterdam Cheese Corp. 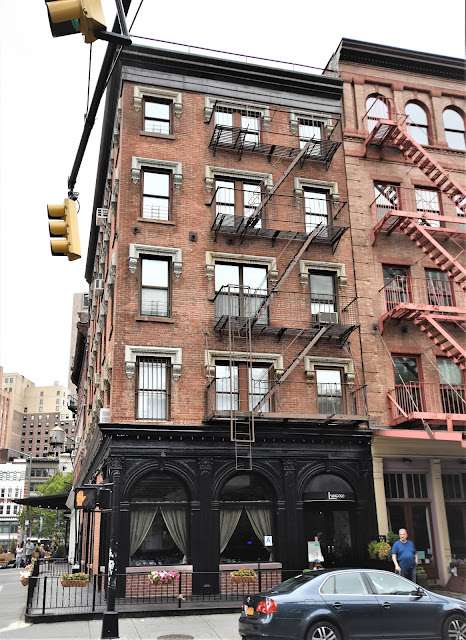 But the late 20th century revitalization of Tribeca increasingly pushed the old factories out.  In 1986 No. 192 was converted to residential use, with one loft dwelling on each floor.  Today the store where produce and dairy products were sold for nearly a century and a half is home to an Italian restaurant.  And to make the tangle in addresses even more confusing, it uses the address of 190-A Duane Street.