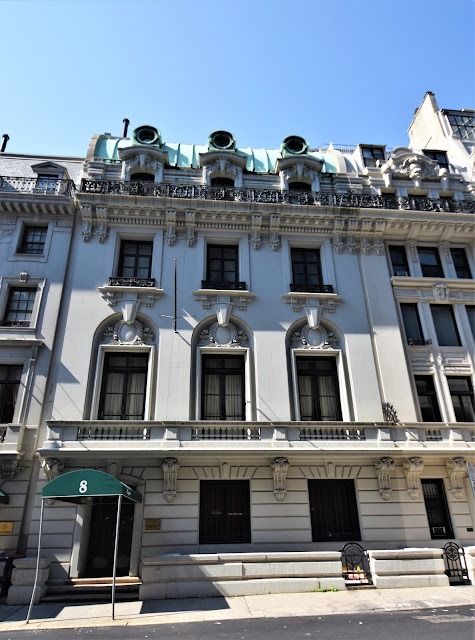 On July 13, 1900 the architectural firm of Hiss & Weekes filed plans for two side-by-side mansions at Nos. 6 and 8 East 65th Street for millionaire William H. Bliss.  No. 8, at 43 feet wide, would be nearly twice the width of its neighbor.  The plans projected the cost of the project at $250,000--more than $7.5 million today.   When details were slightly changed and the architects submitted new plans on August 24, the owner of record was no longer William Bliss, but his wife, Anna.

It took two years to construct the architecturally harmonious mansions.  No. 8 (which replaced two 1879 brownstones) was a frothy celebration of the Beaux Arts style, so popular at the time among wealthy homeowners.  A full-width stone balcony at the second floor sat upon heavy console brackets.  Three sets of French doors opened onto it, set within arches filled with garland-draped cartouches and carved ribbons.  A bracketed stone cornice served as a second balcony, with heavy French railings, at the fourth floor.  Here prominent dormers rose into the copper covered mansard with its three bull's-eye windows.

The Bliss family moved into the smaller house next door, while they leased No. 8 to W. C. Gulliver.  He and his wife were well-known in coaching and pedigree dog circles.

Newspapers seemed confused as to why the Blisses chose to live in the smaller mansion.  The Sun later mentioned "Mrs. Bliss erected a 40 [sic] foot front house at 8 and 10 East Sixty-fifth street but decided not to occupy it."  The Record & Guide said "upon completion she decided it was too large for her needs."

While the Gullivers leased the house, James J. Hill, president of the Great Northern Railroad and the Northern Pacific Railway, was spending more and more time in New York City.  Known as "the empire builder," he had amassed a tremendous fortune.  A resident of Minnesota, when he was in town he lived in an apartment in the Bolkenhayn Apartments on Fifth Avenue at 58th Street.

On June 13, 1906 The New York Times reported "Mr. Hill is the second of the Western railroad magnates to reach the decision recently that he spends enough time in New York to justify his buying a house here."  It was not simply "a house" that Hill bought, it was the sumptuous mansion at No. 8 East 65th Street.  He paid Anna B. Bliss $450,000 for the property, or abut $12.6 million today.

The Record & Guide deemed the house "one of the finest in the 5th av section," and The Times noted the exclusive nature of the neighborhood.  "Right around the corner in Fifth Avenue are the houses of Frank Jay Gould, William Guggenheim, and George Crocker, while within a block or two in either direction along the fashionable thoroughfare are the residences of George Gould, Col. John Jacob Astor, and H[enry]. O. Havemeyer."

The scale of the mansion belied the fact that it was technically a second home or that all of James and Mary Hill's ten children were grown.  The youngest, Walter Jerome Hill, was 21 years old at the time.

Nevertheless, the couple became a visible presence in New York Society and in the neighborhood.  In 1907 Hill erected a mansion next door, at No. 12, for his daughter, Gertrude, who had married Michael Gavin.  And a year later, in November, he spent half a million dollars to buy the four-story house directly behind the two mansions at Nos. 7 and 9 East 64th Street.  The New-York Tribune explained "The purchase was made to prevent the erection of an apartment house, which would affect the light and air of his house" and that of the Gavins.  The article added, "It was also said that Mr. Hill would probably erect on the site two houses, one of which would be for his son, Louis W. Hill."

A most disturbing incident occurred on September 29, 1911.  William and Anna Bliss were in Europe, leaving Anna's step-daughter, Kora F. Barnes behind.  Kora was the daughter of patent medicine mogul and politician Demas Barnes, who had died in 1888.

Kora had suffered a nervous breakdown in 1910; but her physician felt that she was now "practically recovered.  As a matter of fact, in July she had gone on an automobile tour of New England with three friends, taking along her companion, Kate Erskine, and her private secretary.

September 29, 1911 was her 53rd birthday and she had plans to attend the Garden City aviation meet; but the weather ruined that.  Instead she stayed at home in No. 6 with Kate and directed the staff in preparing her birthday dinner for friends, which would be followed by a theater party.

At some point Kate left the room to answer a phone call.  When she returned Kora was missing and the windows were open.  "Looking out, she saw the body of Miss Barnes," said The Times.  It was draped over the wall of the Hill property.

"Miss Barnes was a large woman weighing 170 pounds.  In falling she struck a projected ledge and landed on a stone wall separating the yards in the rear of the residence of Orme Wilson, 3 East Sixty-fourth Street, and that of J. J. Hill."

James and Mary Hill were at their St. Paul, Minnesota home in the spring of 1916 when James became ill on May 17.   He died at the age of 77 on May 29.  In unnecessary and posthumously-embarrassing detail, The New York Times announced the cause was "hemorrhoidal infection."

The article was written in otherwise florid prose.  "In his room, in the southeast corner on the second floor of the brownstone house, overlooking the city to which he same sixty years ago as a clerk, the end came."  It continued "Kneeling at the bed, her hands clasping the hand of the man whose wife and helpmate she had been since 1867, was Mrs. Hill."

Hill's estate was estimated at a staggering $75 million.  The funeral was held in the St. Paul house and a private mausoleum was erected on the grounds of their summer estate, North Oaks to house the body.

Mary Hill soon moved to an apartment at No. 635 Park Avenue and No. 8 was sold to wealthy real estate operator Edward Hubbard Litchfield and his wife, the former Madeleine Middagh Sands.  The couple were middle-aged, Edward being 61 and Madeleine 58 at the time of the purchase.  They had four children, Edward, Bayard, Marion and Madeline, all in their mid-30's.

Both Edward and Madeleine came from long-established Brooklyn families.  The original Litchfield estate engulfed much of what is today Prospect Park, and the Sands family owned much property just below what is today Brooklyn Heights.  Sands Street was named after her family.  The New York Times later said of Edward, "He was privately fitted for college" and earned a law degree at New York University in 1867.  But he gave up law and "entered the real estate business and amassed a fortune."

The couple had a 50,000-acre country estate, Litchfield Park, in the Adirondacks that included "a fine game preserve," according to The Times.  An avid sportsman, Edward visited Scotland every fall for the annual grouse shooting.  For several seasons he rented a baronial castle there "in which to entertain his guests."

Edward was a zealous collector of paintings, medieval armor and ancient firearms.  The 65th Street house held his collection of antique shotguns, known as fowling pieces, reputed to be among the finest in the country.

While spending time at Southampton on August 9, 1923 Madeleine died.   Only Bayard had married by now, and the three other children lived on with their father in the 65th Street house.  Their names only rarely appeared in the newspapers.  An exception was the mention seven months after Madeleine's death that "Edward H. Litchfield sailed for Nassau on March 19 where he will join his son, Mr. Bayard Sands Litchfield."

The mansion was the scene of at least one glittering entertainment in November 1928.  Edward opened the house for the debutante reception of Bayard's daughter, Barbara Victorovna Litchfield.  Brooklyn Life noted that she "comes of families which have been prominently connected with Brooklyn since an early period in its history."

In 1929 Edward's physical condition began failing.  He died of bronchial pneumonia at the age of 85 at Litchfield Park on March 3 the following year.  His obituary noted that he "had been a semi-invalid for the last year."  His funeral was held at Grace Church in Brooklyn where he had been a senior warden.

His massive estate was divided among the four children, with Edward Jr. being the largest beneficiary.  The paintings and statuary, much of which were family pieces, passed down from Edward Sr.'s father, Edwin C. Litchfield, all went to Edward.  The will insisted that Edward Jr. keep the family art collection intact.

Less than a year after her father's death, on January 2, 1931, Madeline died in the 65th Street mansion.  Her estate was valued at more than $1.6 million.

Marion and Edward were little affected by the Great Depression, living on in the French-style mansion surrounded by the invaluable collection of artwork and medieval arms and armor.  A rare entertainment occurred when Marion hosted a wedding reception in November 1932 following the marriage of her cousin, Nancy Gardiner Willard, to Dr. Frank Brock Orr.

Like his father, Edward was an avid hunter and sportsman and his advancing age did not deter him.  He was a member of the "closely limited" Flanders Club, a hunting and fishing group in Flanders, Long Island.  On the afternoon of November 25, 1949 the 75-year old and another elderly hunter, Augustus Barnard (he was 78) went duck hunting on Peconic Bay in a fishing boat.   The boat was operated by 46-year old Louis Eastwood, the superintendent of the Flanders Club.

Tragedy struck when the boat capsized about 40 feet from shore.  The heavy clothing and boots worn by the old men pulled them under.  Barnard managed to cling to the overturned hull until he was rescued.  Club employees found Edward's body and, sometime later, state police recovered the body of Eastwood.


Now alone, Marion soon moved to No. 1060 Fifth Avenue.  She died there in January 1961 at the age of 83.  The 65th Street mansion was sold to the Republic of Pakistan for use as its Consulate to the United Nations.  An alteration completed in 1951 included "offices and private apartments."  The consulate remains in the house.