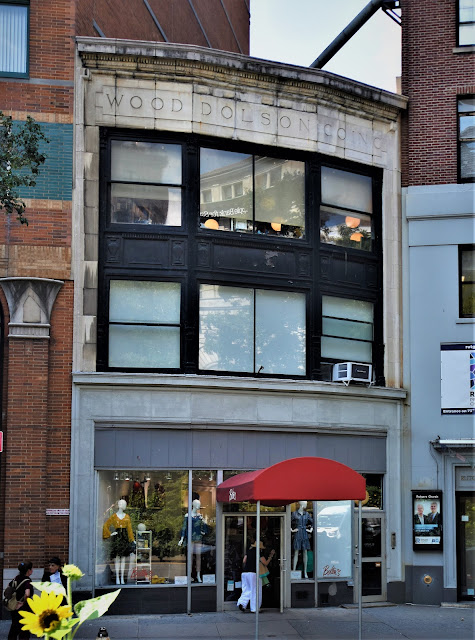 Business was such in 1922 that the real estate firm Wood, Dolson & Co. required increased office space.  Frederick R. Wood founded the firm just after the turn of the century as F. R. Wood & Co., and around 1912 took William Hamilton Dolson as a partner.  Although Wood withdrew from active participation in the firm sometime during World War I, his name remained when the company was renamed Wood, Dolson & Co. in 1919.

Now the firm negotiated a deal with the Rutgers Presbyterian Church, which owned a vacant plot on Broadway, just south of 73rd Street, next to its church building.   The lot may have remained undeveloped this long because of its odd trapezoidal shape due to the angle of Broadway.  Wood, Dolson & Co. signed a 21-year lease for about $12,500 per year, or about $15,250 a month today.

Two firms were involved in the design of the Wood, Dolson & Co. structure.  John D. Boyd was a fledgling architect, having just opened his office two years earlier.  He served as associate architect to F. B. & A. Ware.  Partners Franklin B. and Arthur Ware were veteran architects, having started their careers in the office of their father, James E. Ware, in the 1890's.

On December 9, 1922 the Real Estate Record & Builders' Guide reported "The new office building for the Wood, Dodson Company, located at 2091 Broadway...is now in course of construction.  The business of this firm has recently been expanded to such an extent that all of the space in this structure will be utilized to house the executive offices, sales, renting and insurance departments of the business."

Six months earlier, when the lot was acquired, The New York Times had mentioned a challenge faced by the architects.  "There are certain restrictions on the property, and the architecture of the new structure must conform with the church building."  In response F. B. & A. Ware and John D. Boyd, "associated," had designed a three-story, slightly faceted structure clad in Tennessee marble.  They loosely described the architectural style as "in the period of Louis XVI."  The Record & Guide called the facade, "very simple in its lines but of dignified proportions."

"The large place glass windows are set in frames of ornamental cast bronze," said the Guide, "delicately modeled, and the whole is crowned with a marble cornice of simple design."   The journal made special note of the odd plot.  "The site selected presented a difficult problem to the architects, in that the facade is designed on a splayed surface, but it has been successfully handled by the architects."

No. 2091 was renovated to house an office on the ground and top floors, with a "meeting room" on the second.  The first floor was leased by the West Side Defense Council in 1942 for use as a "master information center."  Although the United States was not yet involved, the war in Europe made an impact on Americans.  The New York Times reported on September 5 that the Council "hopes to establish a new and more important definition for the word 'consumer."

Mrs. Manfred Nathan was chairman of the "consumer committee" and explained "the consumer must be a good, all-around economic citizen."  The Broadway office, really a showroom of sorts, held booths and tables with visual displays to "give instruction on many things from being a good voter to caring for the baby."

The Times article noted "A booth sponsored by the Greater New York Safety Council will street home safety measures.  The health and welfare of children in wartime will be fully treated, as well as the more conventional aids to consumers, such as economic buying, conservation and rules in good nutrition."

While the West Side Defense Council continued its wartime work downstairs, the brokerage firm of Newburger, Loeb & Co. opened a branch office on the third floor.  The second floor became home to the Amsterdam Democratic Club.

Like dozens of other such organizations, the Amsterdam Democratic Club was formed in the 19th century as a Tammany district office.  It would remain in the Broadway building for decades, the scene of sometimes heated nomination voting, jubilant political victory parties and similar functions.

Senator James M. Mead, described by The Times as the "Democratic-American Labor-Liberal candidate for Governor," addressed the group here on October 28, 1946.  The newspaper said he ridiculed the Republican Party's efforts to "capitalize politically on current shortages on consumer goods and food."

By 1949 Leslie Records, Inc. operated from the ground floor.  That year it scored a coup by getting the rights to distribute "The Brooklyn Dodgers Jump," sung by three professional ballplayers, Ralph Branca, Carl Furrilo and Erv Palica.  They were backed up by "the Ebbets Field Chorus."

But while Leslie Records sold the novelty recording, much more serious business was being conducted on the second floor that year.  The once-elegant Ansonia Apartments, built in 1904 by W. E. D. Stokes at a cost of $4 million was only feet away at the northwest corner of Broadway and 73rd Street.  After it was sold to the Dajon Realty Corporation in October 1946 things went downhill rapidly.

Tenants and employees joined forces and began meeting in the Amsterdam Democratic Club space in December 1948.  Issues on the agenda at the second meeting in January included "unjustifiably high" rent, employees inability to cash paychecks for nearly a month, and curtailment of elevator and switchboard services.

One tenant, attorney Julius L. Schapira, was quoted in The New York Times on January 26 saying "The building is in a deplorable condition, with dirty floors, ceilings and walls half-painted and radiator grills removed from the walls and scattered in the corridors."

A third meeting, on February 1, 1949, resulted in when The Times called "an enthusiastic overflow."  The article said "With the meeting-hall jammed to the walls and about 100 tenants standing outside," the group agreed to donate 1 percent of their annual rent to a "war chest" to "eliminate their grievances against Samuel Broxmeyer, owner of the building."  Simultaneously, Broxmeyer filed for bankruptcy.

The meetings in the Amsterdam Democratic Club bore fruit.  Broxmeyer was eventually sentenced to five years in jail and the Ansonia was liquidated in at a foreclosure auction for $40,000 to a mortgage holder.

In the meantime, Newburger, Loeb & Co. remained on the top floor into the 1960's.  By 1983 the store was occupied by Workbench, where household items like a tea cart of "plasticcoated wire" able to withstand outdoor weather could be procured. 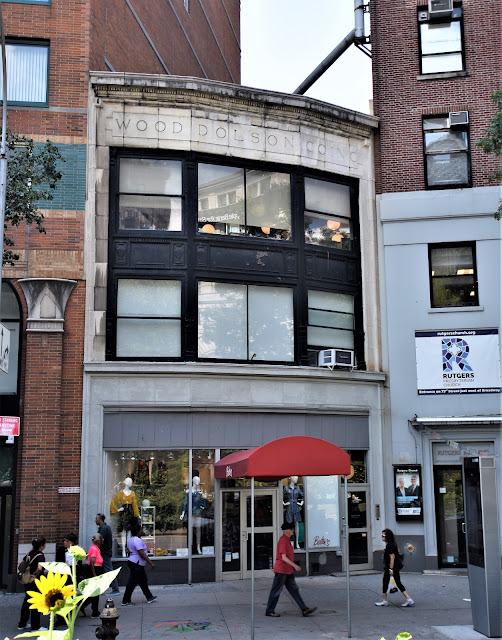 Even with its altered storefront, Wood, Dolson & Co.'s unusual and slightly askew building is barely changed since 1922.  And the firm's name--a mystery to most passersby--still proudly survives, carved into the white marble facade.

Email ThisBlogThis!Share to TwitterShare to FacebookShare to Pinterest
Labels: broadway, F. B. and A. Ware, john d. boyd, upper west side