"Boys in the Band" and Missing Chandeliers--136 East 65th Street 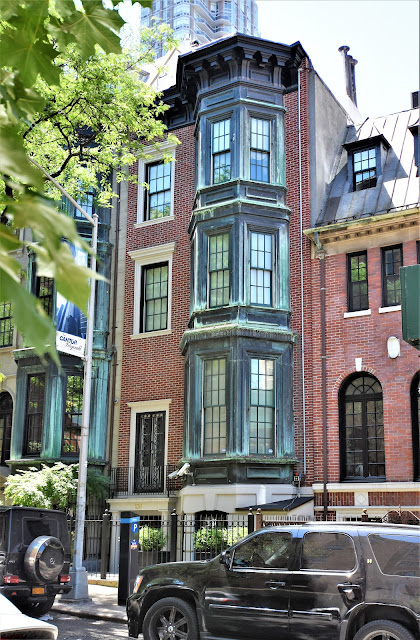 In 1871 developer brothers George and John Ruddell completed a row of seven brownstone-faced rowhouses on the south side of East 65th Street, between Lexington and Third Avenues.  Designed by Frederick S. Barns, the 20-foot wide homes stood out from their peers with their full-height angled bays, sheathed in copper.  Three stories tall above an English basement, they featured stone stoops and handsome metal cornices.

No. 136 was purchased by real estate operator Thomas Kilpatrick as an investment property.  In April 1872 he advertised it as "one of those handsome three story high stoop stone Dwellings on Sixty-fifth street, near Lexington avenue."  Kilpatrick pointed out it contained "every modern improvement" and offered it at $1,500 "to a good tenant."  The monthly rent would equal about $2,600 per month today.

It would not be until the train tracks of Park Avenue were lowered and covered over that the blocks to the east would begin becoming truly fashionable.   That may have been reflected in Kilpatrick's advertisement in September 1875.  "The handsome three story brown stone house 136 East Sixty-fifth street will be rented low to good tenant."

But by 1907 when the house was sold to Frederick S. Lee things had changed.  Lee was a well-known doctor and a professor in Columbia University's College of Physicians and Surgeons.  Like Kilpatrick, it does not appear that he and his wife ever lived in the house; but leased it.  In 1909 David S. Myers as living here when he was appointed a Commissioner of Deeds.

The Lees did, however, like the neighborhood; for in 1912 they began construction of a double-wide mansion nearby at Nos. 125 and 127 East 65th Street.

In April 1918 Lee hired architect E. C. Dean to do $6,000 in updating.  The improvements included modern bathrooms and a new pantry and dumbwaiter.  The updating paid off and later that year the house was leased to Austen Gray, executive with John Wanamaker's, and his wife.  The now high-tone character of the block was evidenced in the single line mention in The Sun on October 19, 1919:  "Mrs. Austen Gray has returned from Newport to 136 East Sixty-fifth street."

The Grays' residency would not be especially long.  On December 30, 1919 The Sun reported that the Lees had sold the house "for occupancy at the expiration of the present lease."  The buyer was Dr. James Alexander Miller, who was most likely professionally connected with Dr. Lee.

Miller had graduated from Princeton University in 1893, then from the Collage of Physicians and Surgeons of Columbia University in 1899.   He was now Visiting Physician in charge of the Tuberculosis Service of Belleview Hospital.

Before moving his family into their new home, Miller engaged the esteemed architect James Gamble Rogers to make extensive renovations in 1922.  The stoop was removed and the entrance moved to the basement level, a few steps below the sidewalk, and the facade was veneered with red brick.  Why the brownstone was covered over is puzzling, since the modernization did not extend to the significantly Victorian copper bay.

Peggy Miller enjoyed the privileges available to the daughters of well-to-do families.  She attended the exclusive Brearley School and then went on to Bryn Mawr College for a year.  Her debutante entertainments were held in the winter of 1925-26.  Her parents announced her engagement to Daniel Allen Lindley on October 6, 1931.

In 1953 No. 136 was converted to two duplex apartments--one in the basement and former parlor level, and one on the third and fourth floors.  It was not the end of socially prominent residents, however.

One of  the spaces became home to Gerald Merrick and his wife, and her two daughters from a former marriage.  As had been the case with Peggy Miller, Anne and Alice Talcott both were educated at the Brearley School.  Anne went on to Connecticut College and Alice to Smith College.  The family's country home was in Brewster, New York and it was there that the Talcott sisters were married--Anne in October 1956 and Alice in June 1958.

Somewhat surprisingly, the exterior of the house served as the outside of the apartment of Michael in the 1970 movie The Boys in the Band.

It was not long afterward that Robert M. Pennoyer purchased the house.  A great-grandson of John Pierpont Morgan, he and his wife, Victoria Parsons Pennoyer,  had four children: Christy, Russell, Tracy and Peter.   Their country home was in Katonah, New York.

No. 136 was re-converted to a private home in 2013 by "taxi king" Evgeny (better known as Gene) Friedman and his wife, Sandra.   Friedman had amassed a fortune as the owner of the most taxi medallions in New York.   The couple decorated the 65th Street house with valuable furnishings and artwork.  But trouble was on the near horizon.

It started with domestic abuse.  In August 2015 Friedman pleaded guilty to reduced charges of harassment after allegedly "slamming Sandra into a wall," as reported in The New York Post.   Friedman was ordered to stay away from his wife, and he turned to his business partner, Michael Cohen, better known today as Donald Trump's attorney, for help.

Cohen arranged for Friedman and his dog, Harry, to move into an apartment owned by Jared and Ivanka Kushner in Trump Park Avenue, the same building where Cohen lived.

A few weeks after the incident Sandra filed for divorce.  Before leaving the 65th Street house she removed some mementos.  Friedman retaliated by filing suit.  According to journalist Rebecca Rosenberg, writing in The Post on November 2, he "says his estranged wife swiped two Baccarat crystal chandeliers worth hundreds of thousands of dollars when she moved out of the couple's $6.2 million marital home in October."

With the drama past, No. 136 has returned to tranquility.  Whether the pricey chandeliers (which were in the house when the Friedman's purchased it) ever found their way home is unclear. 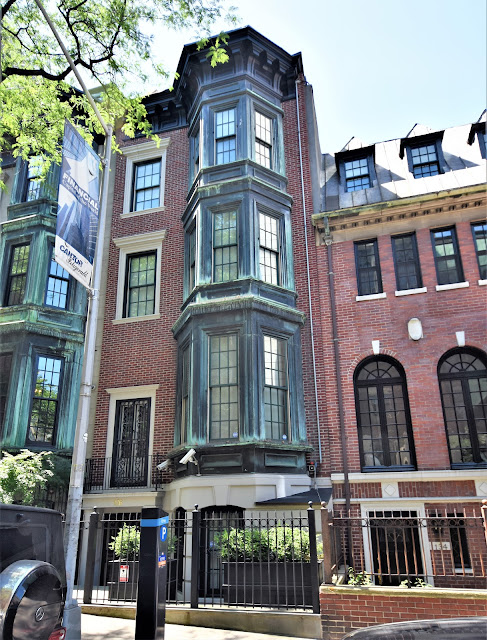