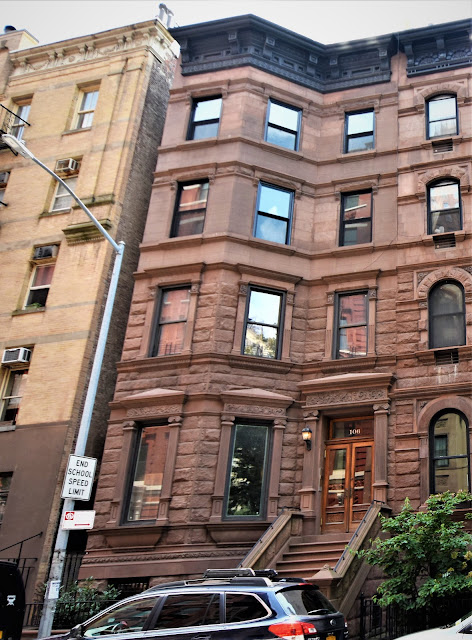 In 1891, at a time when speculative developers were erecting long rows of houses on the Upper West Side, some nearly engulfing entire blockfronts, Eli Martin embarked on a less ambitious project--two spacious side-by-side dwellings at Nos. 106 and 108 West 78th Street.   At 24-feet wide and four stories above the basement level, they were intended for moneyed buyers.

Martin's architect, Henry L. Harris, cleverly designed the two to be pleasingly similar, but unmistakably individual.  Both wore undressed brownstone on the lower floors, and planar stone on the top two.  Shared bandcourses connected the two designs; however No. 106 was almost purely Renaissance Revival (mitigated only by the chunky brownstone blocks) and 108 much more influenced by Romanesque Revival.  Rather surprisingly, not even the pressed metal cornices were identical.

The entrance and the floor-to-ceiling parlor windows of  No. 106 were framed by Ionic pilasters that sat on paneled pedestals.  They supported heavily carved entablatures under peaked hoods.  The design was repeated on a lesser scale on the second floor.  By eliminating the rough-cut stone on the upper floors and minimizing the ornamentation, Harris lightened what could have been a visually ponderous design.

The houses were completed in 1892 and No. 106 became home to the William Wallace Farmer family.  Born on January 12, 1851, Farmer was only 17 when he married Annie Jones.  She died soon after in childbirth.  In 1881 he remarried.  His bride, Mary, was the daughter of well-known Wall Street banker, E. M. Knowles.  The couple had a daughter, Marjorie.

After graduating from the Polytechnic Institute in 1865, Farmer had gone into his father's firm, Farmer, Little & Co., manufacturers of printing type.  The year that William purchased No. 106 he became a full partner in the firm, which was renamed A. D. Farmer & Son.  The company was one of the largest type foundries in the country and had branch offices in Chicago, Detroit, Kansas City, Philadelphia and San Francisco.  William had amassed a significant personal fortune by now.

In 1897 The National Cyclopaedia of American Biography noted "His home, 106 West Seventy-eighth street, is adorned by many fine paintings by European and American artists of high repute."  Farmer's wealth was reflected in the publication's mention that "He is a lover and excellent judge of horses."    And a year earlier Men of the Century had described him as "a favorite in society, and [he] belongs to a number of social institutions.  These include the Lotos, Colonial, New York Athletic, and Riverside Yacht Clubs."

The 65th Street house was the scene of frequent entertaining.  On January 30, 1894, for instance, The New York Times reported "A brilliant musicale was held last evening in the home of Col. W. W. Farmer, 106 West Seventy-eighth Street."  Among the seven soloists was Mary Farmer.  "Mrs. Farmer has a clear, sweet soprano voice, and she had to respond to many encores," said the article, adding "After the musicale there was dancing, and later an elaborate supper was served.  The house was tastefully decorated."

The guest list that night was peppered with the names of some of Manhattan's most recognizable social players, most noticeably millionaire Jules Bache and his wife.

On January 21, 1896 The Times announced "Mr. and Mrs. W. W. Farmer...will give an elaborate dinner on Wednesday evening of next week.  The house will be decorated with roses, ferns, and potted plants.  Miss Marjorie Farmer, a pretty, petite girl of the blonde type, will assist her parents in receiving."

Marjorie's role that night was preparing her to slip into her own social role.  And that came to pass a year later, almost to the day, when she was married to Egbert B. Seaman, Jr. in the Farmer home on January 12, 1897.   The following day the New York Journal reported "Miss Marjorie Farmer was one of yesterday's pretty brides" and noted "The floral embellishment of the residence of her parents...was very handsome.  Many white and pink roses and palms were used."

Perhaps the first hint that things were not completely rosy, financially speaking, for Farmer came in the summer of 1899.  The New-York Tribune reported on July 7, "An execution for $25,665 was issued yesterday against William W. Farmer, president of the A. D. Farmer Type Founding Company."  The award, issued to Francis O. Blackwell, would amount to nearly three quarters of a million dollars today.

As was often the case, the title to the 65th Street house was in Mary's name.  It was her name, therefore, that appeared in newspapers in October 1900 when creditors began pressuring the Farmers for the $37,358 due on the house and the $598.88 in back taxes (more than $1 million today).  The house was lost in a foreclosure auction the following year.

It was purchased by John Foster Williams and his wife, L. Josephine.  Josephine became a member of the West End Woman's Republican Association, but it seems to have taken second place on her priority list to The Sunshine Society, which she had joined in 1900.

The group was formed prior to the Civil War, its purpose being "to incite its members to a performance of kind and helpful deeds and thus to bring the sunshine of happiness into the greatest possible number of hearts and homes."  While it seemed frivolous on the surface, the Society established day nurseries, fresh air homes, lunch rooms and free libraries.

Josephine joined the group with a splash.  On November 27, 1900 the New-York Tribune had reported "After observing the universal and non-sectarian spirit of the Sunshine Society, Mrs. John Foster Williams, of Manhattan, has composed the following stanza:


Bound to no party, to no sect confined;
The world our home, our brethren all mankind;
Love trust, do good, be just and kind to all.
Exalt the right, though every ism fall.

She went so far as to have a professional artist paint the poem in oil "with gold tings" and to have it framed to hang on a wall of The Happy Day House.  As her initiation fee she donated "six pairs of dainty booties in pink, blue and white for Sunshine babies."

Before long it the tables were turned and the Sunshine Society was sending gifts and cards to Josephine.  On March 4, 1903 the New-York Tribune reported "Some golden daffodils, emblems of sunshine, were taken on Monday to Mrs. John Foster Williams, No. 106 West Seventy-eighth-st., who has been in bed twenty weeks, and is still very ill.  She reports that her long, weary days have been brightened by the receipt of cheery letters from T. S. S. members in different places, even so far as the State of Washington...Although unable to write, Mrs. Williams desires to thank all who have sent sunshine into her sickroom.  These little messages have seemed to be a link with the busy world from which she is shut out."

Month after month, although "unable to write," Josephine managed to let the newspapers know of her condition and she routinely appeared in print expressing appreciating for the well wishes and flowers.

While members of The Sunshine Society no doubt awaited word of Josephine's death, it was instead John who died on March 16, 1904.  The funeral for the 69-year old was held in the house the following night.  Josephine's health seems to have immediately improved.  She sold No. 106 to Samuel C. and Caroline S. Hine and began dabbling in real estate north of the city.

The Hines immediately set out to update the Victorian bathrooms, laundry and kitchen facilities.  In September 1904 Domestic Engineering reported that J. Haughey, whose office was a few blocks away at No. 490 Columbus Avenue, had been hired to install "a new plumbing system including new high-grade fixtures in the house at 106 West Seventy-eighth street for Mrs. Hines [sic]."

Caroline died on June 25, 1928.  Her funeral was held in the house two days later.   The following year saw another funeral in the house.  Francis Adams Hine died here on March 5, 1923.

By the Depression years it appears No. 106 was being operated as a rooming or boarding house.  Policeman Thomas Comiskey lived here by 1936.  The hero cop had been cited for bravery in 1934 when he captured an armed robber even after being shot in a hand-to-hand face off on Amsterdam Avenue.  In February 1936 he was shot four times in attempting to capture four hold-up men fleeing a bar on Amsterdam Avenue.

Now he faced an even graver injury.  Comiskey and his partner, William Skeats, were responding to a fire alarm on January 3, 1937, "with red headlights glowing and siren whirring," as worded by The New York Times.  The police car raced along Columbus Avenue toward the intersection of 86th Street.  "As they sped across, another car darted in front of them and the two automobiles collided."

Both cops were critically injured and had to be removed from the vehicle.  The Times reported that both Comiskey's spine and skull were possibly fractured.  Although his injuries at first seemed deadly, he survived.

As the neighborhood was rediscovered in the second half of the 20th century a renovation resulted in a duplex apartment in the basement and former parlor levels, and one apartment each on the upper floors.  Another remodeling in 1991 sandwiched a floor-through apartment on the second floor between two duplexes; and a 1994 renovation resulted in just two residences--a duplex and triplex.  On the roof there was now a "greenhouse-conservatory." 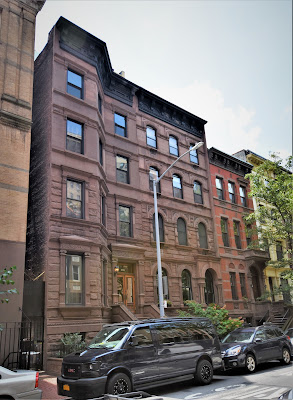 While its fraternal twin lost its stoop, most likely during its 1974 renovation, No. 106 retains most of its 1892 appearance--a time when millionaires and their wives were entertained at "elaborate" dinners and "brilliant" musicales.